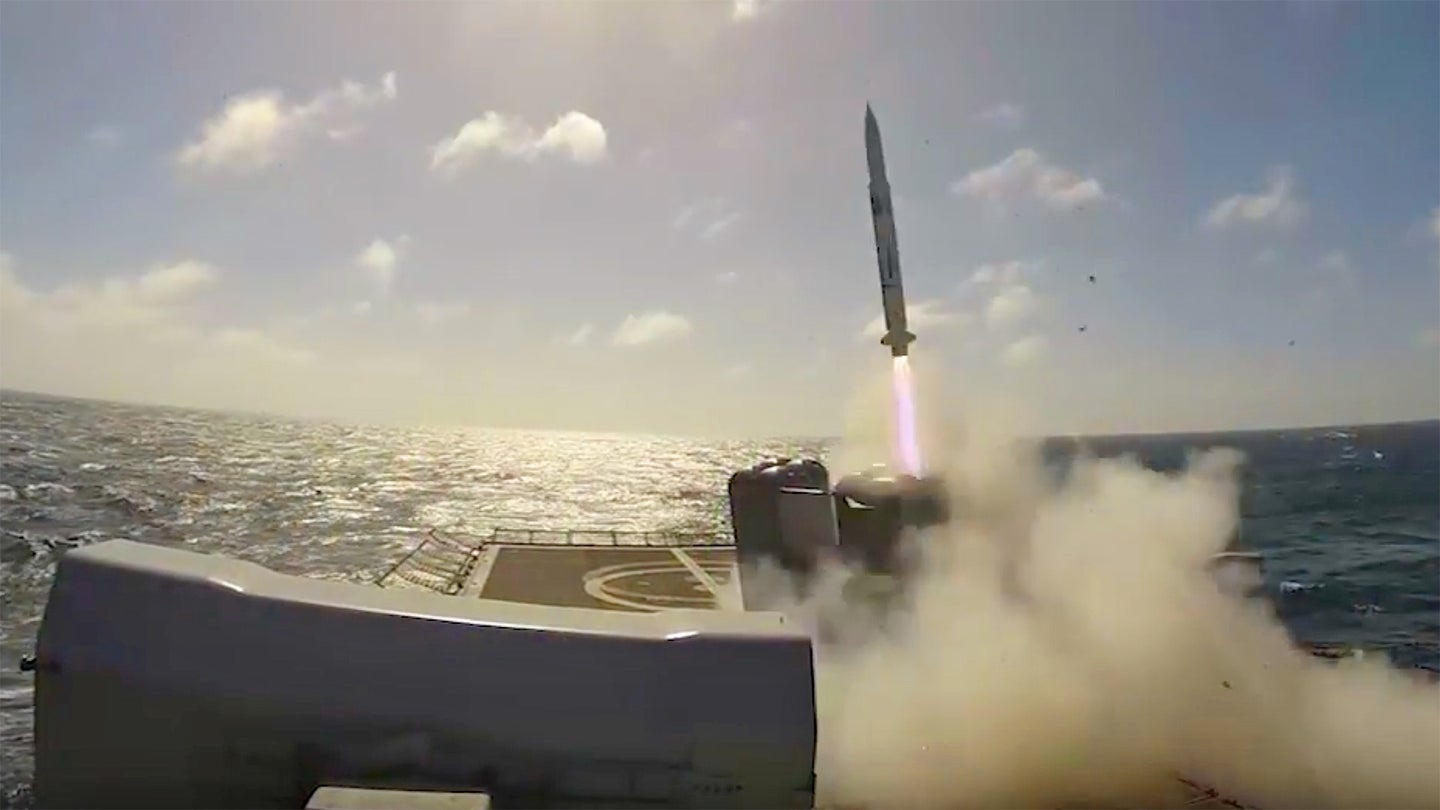 The NATO Sea Sparrow Consortium is decades old and still going very strong. The highly maneuverable RIM-162 Evolved Sea Sparrow Missile (ESSM) has been protecting allied surface combatants and their escorts for nearly 15 years now around the globe and is seen as a huge success. Before that, the RIM-7 Sea Sparrow, itself an adaptation of the AIM-7 Sparrow air-to-air missile, had served since the mid 1970s, protecting everything from American supercarriers to allied frigates from airborne threats and short to medium-ranges. Now the Evolved Sea Sparrow Missile Block II is on the way, with its first test firings having occurred last Summer and the Navy just recently released video from these milestone events.

The ESSM Block II has much in common with its progenitor, including its ability to be quad-packed into a single Mk41 vertical launch system cell. It can also make use of "legacy" launchers like the Mk29 box launcher that still adorns American supercarriers, amphibious flattops, and other allied vessels. The Block II uses the Block I's rocket motor and thrust vectoring hot section, but its seeker is much more capable.

Instead of relying on semi-active radar guidance, where one of the ship's radar illuminators has to "paint" the target for the missile to guide toward and eventually detonate nearby, ESSM Block II features both active and semi-active radar seekers. This dual-mode seeker setup combined with a datalink allows the missile to be fired at targets without ever having the ship illuminate the target at all. The missile gets mid-course updates from the ship via a datalink for longer distance engagements, or it can be launched "fire and forget" for shorter engagements. Fire and forget mode can be used for longer-range shots too, with the missile flying out to its best guess of where the target will be on its own inertial guidance system before turning on its active radar seeker, but the chances of a successful intercept will decrease the farther the missile flies without the benefit of mid-course updates.

This dual mode setup solves a huge problem for the ESSM Block I, as ships have limited capacity to defend themselves due to a finite number of illuminators available to guide each individual missile through their separate terminal attacks. Even though ESSMs could be rippled off quickly at many targets, there simply isn't enough illuminator guidance capacity to support them, even when illuminator time is tightly managed.

This is no longer an issue with ESSM Block II, giving ships much greater capacity to defend themselves against a multi-missile swarm attack, and especially ones emanating from different vectors with missiles flying disparate attack profiles. Additionally, the Block II can still leverage the older style of guidance, using the ship's illuminators to paint the target, which may be advantageous in some instances, and by using both seekers the probability of a kill would likely increase.

Also, in a networked battlespace, ESSM Block II can intercept sea skimming anti-ship missiles at greater distances, even when shipborne illuminators, or even radars of any type, are unable to detect or paint the low-flying targets. The ESSM Block II can leverage third party sensor tracks (from another ship, aircraft etc) under the Navy's cooperative engagement initiatives and fly out towards its target at altitude, and then dive down on it from above, using its own active X-band radar seeker to lock up the target and destroy it. This will be especially useful when opening up the missile's secondary surface attack functions in littoral environments.

All told, RIM-162 ESSM Block II offers a lot of extra capability without having to redevelop the entire missile. And for the US Navy in particular, which fields large amounts of these missiles on its destroyers, cruisers, amphibious flattops, and aircraft carriers, this capability is badly needed. Not just that, but it's also a real value. The ESSM program is funded cooperatively between the US and allied nations that are part of the consortium. The split is roughly 40% United States and 60% foreign partners. So the US Navy gets an updated ESSM with critical new capabilities for 40% of the cost of developing it alone.

The missile is slated to go operational in 2020.