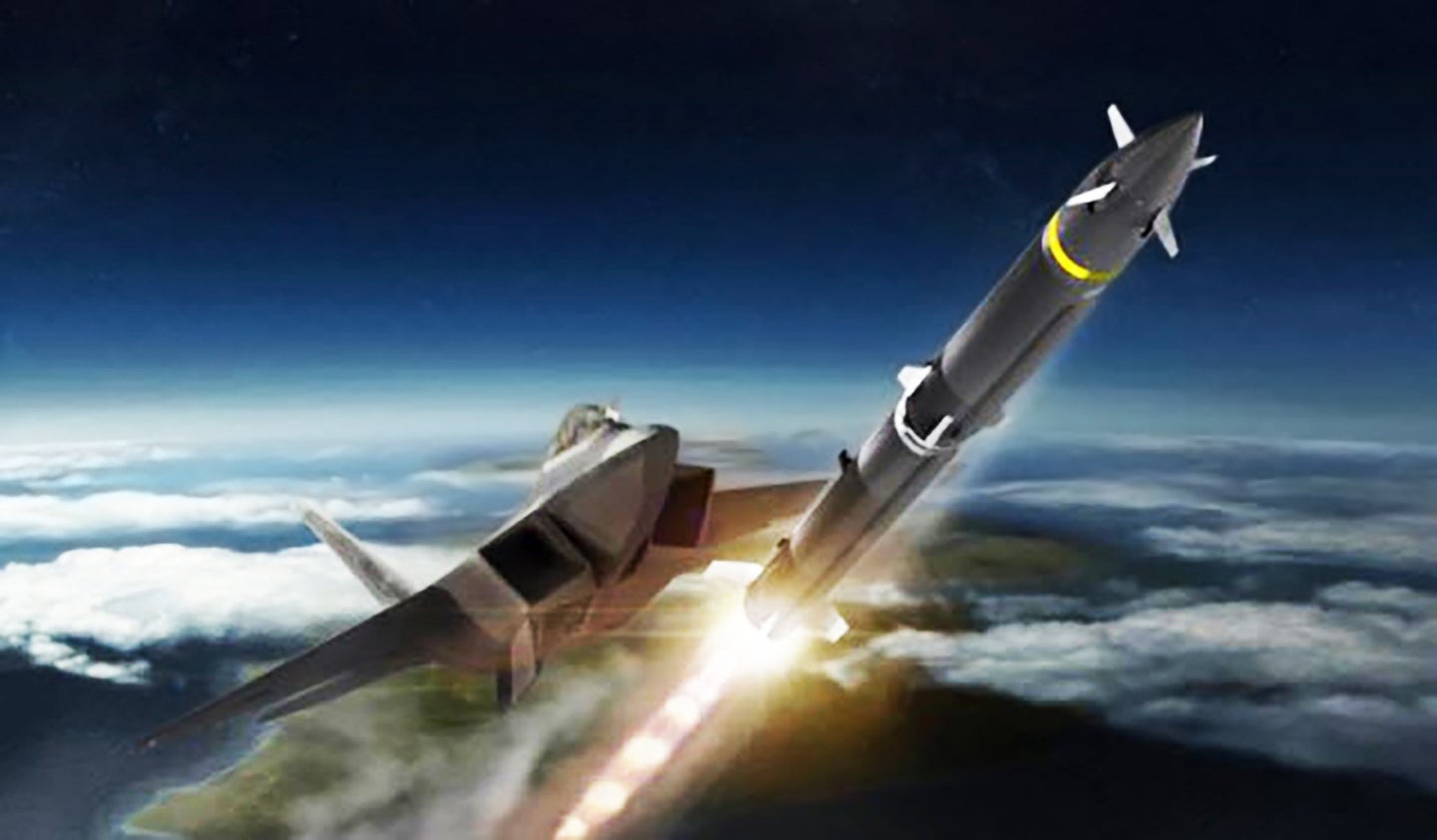 As the latest and likely the last major iteration of the AIM-120 AMRAAM, the D model, spreads throughout the services and America's allies' weapons caches, there has been great speculation as to what will come next, and real concern that the Pentagon has not moved fast enough or in a consistent enough manner to field a next generation long-range air-to-air missile. Now it appears that a new initiative has been quietly underway for two years now to do just that.

Our friend and Flightglobal.com Americas Bureau Chief Stephen Trimble posted a report today identifying a obscure line-item under the Office of the Secretary of Defense in the 2018 National Defense Authorization Act (the Pentagon's budget) called “emerging capabilities technology development." Trimble notes that this is usually attributed to small electronic warfare programs, not new air-to-air missile development. But in this case it included a program dubbed Long Range Engagement Weapon, or LREW for short.

This program has worked as an exploratory initiative used to identify the overall concept, technologies, kill chain structure, and baseline requirements for a new long-range air-to-air missile or family of missiles. Officially the program is aimed at "maintaining America's air dominance." Now the classified results of the program are supposedly being funneled down to the services where they are likely to morph into a hardware development program of record.

Trimble also included an official piece of concept art from the program in his post which clearly shows a two-stage missile design being launched from the weapons bay of an F-22 Raptor. Although we have no clear indication if this is the final LREW concept being passed down for further evaluation and development, the fact that it clearly shows a two-stage air-to-air weapon is interesting to say the least.

Such a weapon could leverage a new family of small, hit-to-kill, intermediate to short-range air-to-air missiles as primary payload attached to a booster. This would maximize weight for propellant and the payload weapon could also be used without a booster for far shorter range engagements. Whether such a setup would fit into a weapons bay of an F-22 or F-35 isn't known, although the artwork implies it would. But regardless, at the ranges it could potentially engage enemy targets, being fired from a low observability host platform has diminishing advantages.

We have discussed small hit-to-kill missiles, long-range air-to-air missiles, and the tactics surrounding both of them before. This includes using an "arsenal ship" such as an F-15, to lug long-range missiles into a position well behind a flight of stealth fighters operating along or beyond the forward edges of the enemy's airspace, and using their sensor "picture" for providing targeting for these weapons via data-link. The long-range air-to-air missile would then be launched remotely by the F-15 operating in safer airspace, with the networked weapon flying to a high altitude while being fed targeting updates from the stealth fighters via data link, before diving down on their targets at high speed.

Alternatively, such a missile can give 4th generation fighters with large radar apertures and powerful AESA radar arrays, once again like the F-15C, a new lease on life, as it can take full advantage of the radar's extreme range as well as an increasingly networked battlespace. If this new long-range missile, or a version of it, can fit into a F-35 or F-22's weapons bay, it provide the types with a longer-range arrow to put in their quiver.

Bottom line, there are many tactics that can be applied to such a weapon, and that's an exciting thing to say the least. A long-range, two-stage missile would be especially useful at targeting strategic force multiplying assets, like airborne early warning and control aircraft, tankers, surveillance drones, and communication relay planes. For the Navy's aircraft carriers, these weapons could give the air wing back its long-range engagement capability that was lost when the AIM-54C Phoenix missile was retired, and later its host platform, the F-14 Tomcat. And striking anti-ship cruise missile carrying bombers is becoming an issue once again with the rise of China's bomber force and the awakening of the Russian Bear.

The possibility of opting for a two stage missile configuration could mean that the DoD plans on skipping an evolutionary step by not moving forward with an air breathing, throttleable ramjet design like the one used on the BMDA Meteor. A two stage system could take better advantage of climbing up into the very thin upper atmosphere where friction and drag are minimized, which would result in longer range and enhanced end-game kinematic performance of the payload weapon. A steeper trajectory and higher speed could also make defending against such an attack more troublesome for the enemy.

Earlier this year, pictures emerged out of China showing what was clearly a very long-range air-to-air missile design being flown on a J-16 indigenous Flanker derivative. You can read all about this missile and our analysis on it here, but suffice it to say, China sees an opportunity in America's lack of a bigger arrow and the vulnerability of American strategic aircraft during long-range expeditionary operations. Russia also has its own long range missile designs equipped with anti-radiation seekers that could potentially home in on airborne early warning and control aircraft like the E-3 Sentry E-2 Hawkeye.

Now we'll have to see if the findings of the Long Range Engagement Weapon program result in a development program of record aimed at putting a new missile into production. Once again, this effort may be best paired with taking an existing shorter-ranged missile in development and pairing it with a specialized booster.

We have discussed doing exactly that before with Israel's Stunner surface-to-air missile which features a unique "dolphin" nose seeker head, housing a dual mode seeker installation. Currently Stunner is launched via booster from the ground, but the missile could also potentially fly as a stand-alone weapon on a fighter aircraft or its boosted version could possibly be adapted as well for the long-range air-to-air combat realm.

As far as size, a notional LREW missile's booster could potentially be sized up or down depending on the limitations of the aircraft carrying it. Going with this type of modular route would break the highly restrictive dimensional limitations that entire fighters were designed and built around—most notably the AIM-120's dimensions for the F-35 and F-22—and would allow much larger future aircraft, like the B-21 Raider, to be able to carry extremely long-range versions of the same basic missile.

The booster could also possibly be used for delivering air-to-ground precision strikes over very long ranges. Even the rendering of the LREW concept depicts what looks more like a boosted Excalibur guided artillery round than anything else, although this is likely just used as a placeholder. Still, an air-launched boosted guided artillery round traveling at very high speeds and altitudes for use against both ground targets and aerial ones alike is something to ponder isn't it? Especially when applied to large strategic sensor aircraft and bomber formations.

Whatever the payload weapon is, such a two-stage air-to-air missile concept is truly an exciting possibility, and could result in a common missile design with ranges from intermediate (no booster) to long-range, to very long-range, to extremely long-range with just the change of a booster section. The core missile and its autopilot, data-link, and seeker system could remain largely unchanged.

With all this in mind, maybe America's next generation long-range air-to-air missile will have been worth the wait.