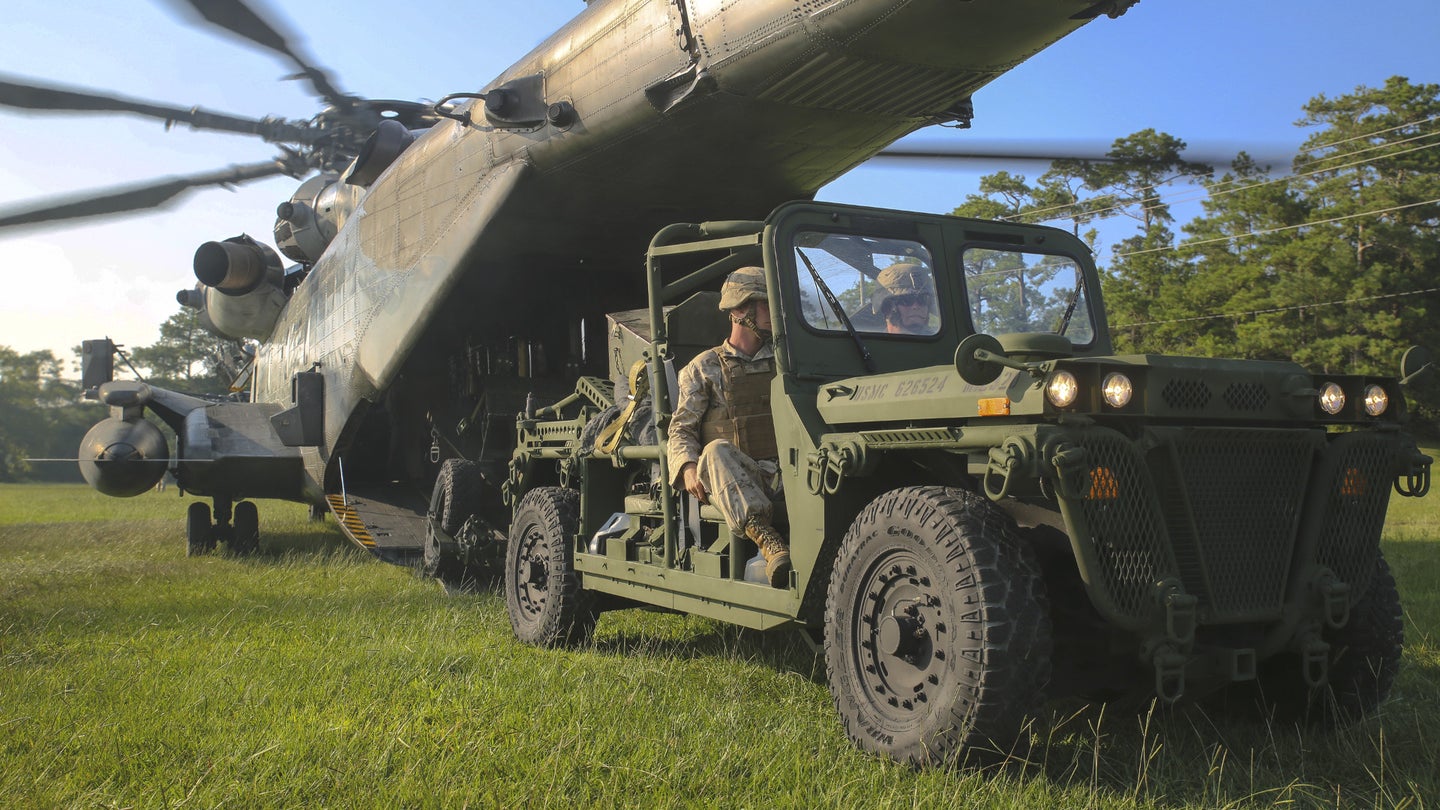 After demonstrating its ability to fire artillery rockets from decks of U.S. Navy ships, the U.S. Marine Corps now says it is interested in a similar, but super-compact mobile weapon system small enough to fit inside its MV-22B Osprey tilt-rotors or its future CH-53K King Stallion heavy lift helicopters. Such a vehicle would greatly increase the capabilities of Marine expeditionary elements, but even the service itself acknowledges it might just not be physically possible.

U.S. Marine Corps Major General David Coffman, presently serving as the U.S. Navy’s director for expeditionary warfare, explained the basic requirements to Military.com on the sidelines of the National Defense Industry Association’s (NDIA) annual Expeditionary Warfare Conference, which ended on Oct. 26, 2017. The officer described a weapon that would have a “competitive” range and capability compared to the M142 High Mobility Artillery Rocket System, or HIMARS, and its GPS-guided 227mm rockets, but on a vehicle smaller than a High Mobility Multipurpose Wheeled Vehicle (HMMWV), or Humvee, all of which could fit within the main cabin of an MV-22 or CH-53K.

“I don’t know what’s in the art of the possible, physics-wise, to get a vehicle that can withstand the recoil of rockets firing, and be a stable enough platform, and still be light enough to be lifted in a helicopter, and all that.” He told Military.com. “So I don’t know what industry can do, whether that’s possible or not … [but] that’s what we need.”

At its most fundamental, the notional requirement makes sense. The Marine Corps prides itself on being able to respond rapidly to crises anywhere in the world. Navy amphibious groups conduct routine patrols carrying so-called Marine Expeditionary Units, with the joint force able to conduct independent air and ground operations. Long range fire support for those elements comes primarily from a small number of M327 120mm mortars and M777 155mm howitzers, both of which need another vehicle to tow them around the battlefield.

The Marines MV-22Bs or CH-53E Super Stallion can carry the “Triple-7,” but only with it slung underneath the aircraft. This extends the time it takes for Marines to get the howitzers into position, since they have to sling them up, fly where they need to go, then unhook the weapons and get them set up to fire. During an actual conflict, enemy air defenses and troops on the ground, to say nothing of complex terrain or other environmental factors, would only complicate this type of operation. The heavy external load also severely cuts down the helicopter's combat radius.

This was part of the reason for the development of the M327 in the first place. Together with the small 4x4 M1162 Growler prime mover, Marines can back the heavy mortar into an Osprey or Super Stallion and then drive it right off after the aircraft touches down. This gives Marines a much more rapidly employable fire support option.

However, the M327 can only toss high-explosive mortars up to approximately five miles away, while the M777 can hit targets at nearly four times that range. On top of that, the 155mm howitzer can fire GPS-guided shells for precision attacks.

The Marines are developing a long-range, precision 120mm projectile, but it will still have just half the range of the bigger guns. Coffman also told Military.com that there is guided option for the M252 81mm mortar in the works that might make the bulkier M327 increasingly superfluous. This smaller weapon is man-portable and part of every Marine infantry company, making up for its shorter range by generally being in closer proximity to forces in need of support.

What Coffman is describing is a system that combines the mobility of the M327, but can lob guided projectiles beyond even the range of the M777. The Marine Corps 6x6 truck-mounted HIMARS, which the general offered as an example of the kind of capability he wanted, can hit the enemy with a GPS-directed rocket up to 43 miles away.

On Oct. 22, 2017, Marines had fired 227mm rockets from the deck of the San Antonio-class landing platform dock USS Anchorage as part of the Dawn Blitz 2017 amphibious warfare exercise. The test underscored the flexibility and utility of HIMARS, something the Marine Corps and the Army are both looking to expand upon further. Coffman, who previously served as deputy commander of I Marine Expeditionary Force and head of its 1st Marine Expeditionary Brigade, the main Marine unit in the drill, was undoubtedly aware of this successful demonstration and its significance for the Corps going into the NDIA conference, which started on Oct. 24, 2017.

He would also be well aware that small, forward-deployed artillery units, manned by both the Army and the Marine Corps crews, have been an essential part of the campaign against ISIS in Iraq and Syria. With both HIMARS and M777 howitzers, they have provided rapid, on-call, precision fire support to local forces that might otherwise have to wait for coalition aircraft to arrive on station. This will likely be a model that appears in future limited, counter-terrorism operations, as well.

An even lighter weight version would greatly expand the capabilities of smaller Marine units that might not be able to manage HIMARS, especially during limited independent missions more detached from established supply lines. The trucks themselves are far too big for even the enlarged CH-53K to carry internally or externally, requiring at least a C-130 Hercules to airlift them into a combat zone. Army and Navy landing craft can also move them from amphibious ships or sea bases to shore.

Coffman’s concept could be difficult, if not impossible, to implement, though, especially if the goal remains to find a way to build a mini-HIMARS with anywhere near similar capabilities. The M327 is already pushing the boundaries of what the MV-22B can reasonably carry and is actually part of a complete Expeditionary Fire Support System (EFSS) that requires multiple aircraft to lug around.

One tilt-rotor or helicopter lugs around the M1162 and the mortar, while another brings in the similarly sized M1163 towing the M1164 ammunition trailer with 30 120mm mortars. Additional trips are necessary to keep up the supply of rounds during sustained operations.

The CH-53K will be able to carry a Humvee internally, a major increase in capability in of itself, but it’s unclear if even that vehicle could handle the weight of a rocket artillery system with a range of more than 40 miles or the shock of repeatedly firing such a weapon. Whether such a truck-mounted launcher would still fit be able to fit inside the King Stallion is another important factor. There’s also the question of how fast Marines could keep up the supply of rockets for the crews once they land ashore, too.

That being said, various companies may already be developing systems that Coffman might find attractive. At the Association of the U.S. Army’s annual conference and exhibition earlier in October 2017, Arnold Defense debuted a light-weight guided rocket system called Fletcher, which it mounted on the back of a 6x6 light vehicle chassis.

The setup features a four round launcher capable of firing the laser-guided Advanced Precision Kill Weapon System II (APKWS II) 70mm rocket. These weapons are already in service on fixed-wing aircraft and helicopters across the U.S. military and the guidance kit offers a cheap and easy way to turn standard versions into precision weapons. Since it slots in between the rocket motor and the payload, it means the ordnance technicians can assemble the final rounds with a variety of different warheads, including more exotic options such as anti-armor penetrators and anti-personnel variants with hundreds of tiny metallic darts known as flechettes.

The immediate issue with using as Fletcher as the basis of a design to meet Coffman's requirements is that its a direct-fire weapon that fires a projectile that flies along a relatively flat trajectory. As such, it could be difficult to adapt it to hit targets indirectly just due to the flight profile of the rocket. In addition, its laser-guidance package means that either the vehicle itself or other personnel would have to mark the target, something Marines might be loathe to do in a firefight where they might be pinned down or otherwise sheltering behind cover.

It is possible that Arnold or another firm might be able to develop a GPS- or dual-mode guidance system, but the final product would hardly match the capabilities of HIMARS. Fletcher only has a range of a little more than three miles, roughly equivalent to the M252 mortar and hardly the distances Coffman was talking about. However, the added mobility might make up for this by allow the vehicle to keep pace with Marines as with the 81mm weapon. It might be possible to develop an extended range 70mm rocket for surface-to-surface applications, too.

Alternatively, the Marines might be interested in a lightweight gun. Mandus Group has developed an 105mm howitzer called Hawkeye that can fit on the back of Humvee or another similar light vehicle. This weapon can reach targets around 12 miles away using rocket-assisted shells. There are also a number of lightweight, soft-recoil mortars on the market that can fit on small trucks, such as the 120mm Spear Mk 2 from Israel’s Elbit and the Spanish EXPAL Integrated Mortar System, or EIMOS, which comes in 60mm and 81mm varieties.

“If we can get a self-contained vehicle that can fire rockets, a box of rockets on a truck that fits in the back of a [MV-22B] tiltrotor or a ’53-K [CH-53K, that’s what we’re after,” Coffman insisted to Military.com. “Let’s see what industry comes up with.”

It will be interesting to see how defense contractors try to meet the general’s requirements.