The Future Of Stealth Is "Morphing Wing" Technology, But Will The B-21 Feature It?

The cutting-edge technology's benefits read like a wishlist for stealth aircraft designers. 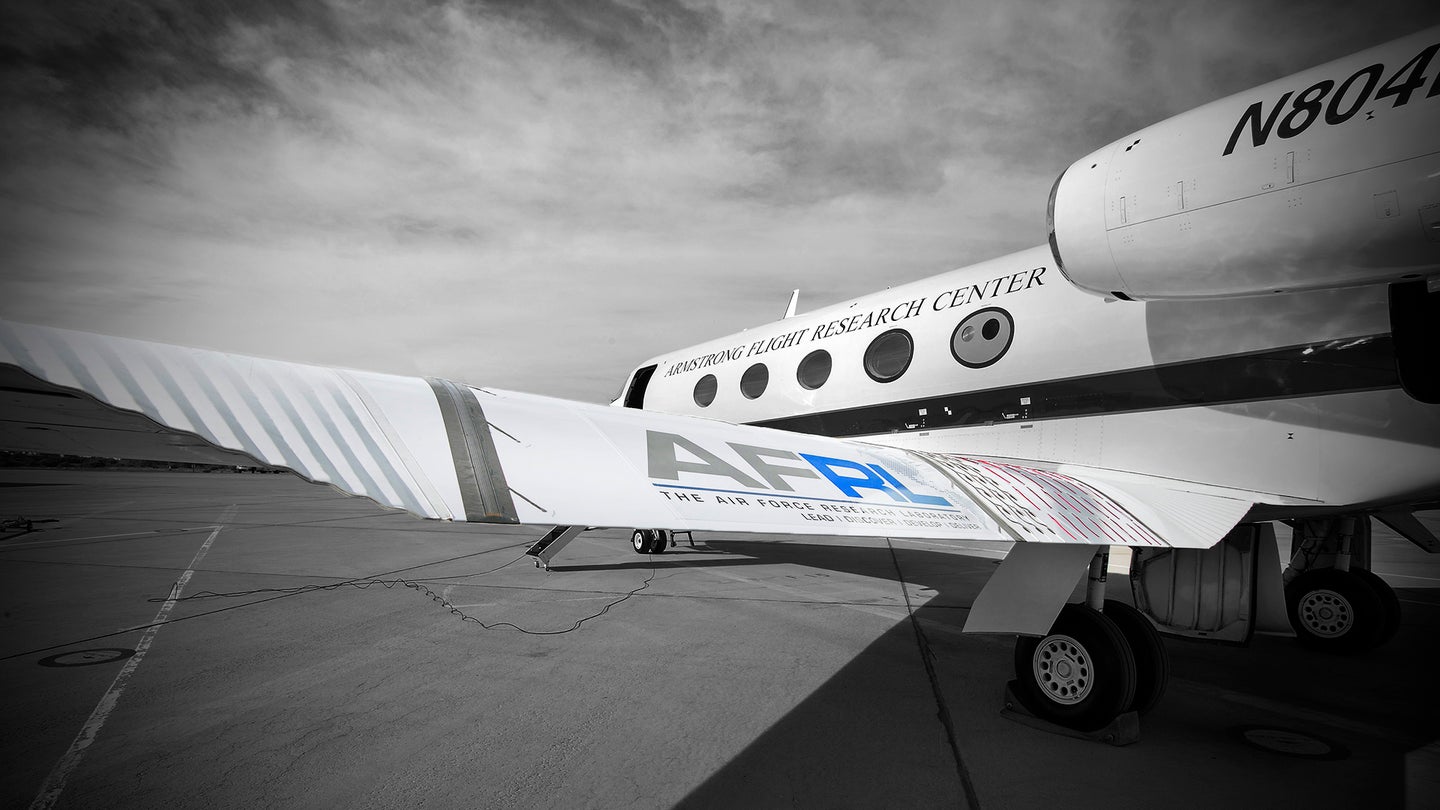 There is a quiet revolution going on in the shadowy world of so called "bleeding edge" aerospace research and development, and it has to do with rethinking a key technology that gave birth to manned flight as we know it—the warping wing.

The Wright Brothers controlled their Wright Flyer in this manner, and for over a decade after their first flight, the concept was used for all types of early airplanes, including what many see as the first fighter, the Fokker Eindecker. But dedicated control surfaces that were housed on a rigid wing designs quickly became all the rage—and rightfully so—as they greatly expanded the possibilities of aircraft designs using available technology of the era.

Fast forward a century and a new form of wing warping, called wing morphing, is quietly becoming one of the most promising new technologies in aviation. Paired with the latest computer technology and advanced composite construction techniques, wing morphing stands to make future airfoils more efficient, lighter, less complex, and even safer. But when it comes to military applications, they also have low observable qualities that could greatly benefit stealthy combat aircraft.

There are a number of morphing wing concepts out there today, including replacing traditional wings with ones with far less moving parts and improved airflow, especially at high altitudes. Flaps and ailerons still exist, but they are seamlessly integrated into the wing itself with few, if any joints. Another is using a concept from the Wright Brothers playbook and creating a slight warping wing via composite structures and a "twisting strut" design concept. This could eliminate the need for using any traditional control surfaces while cruising at high altitudes, instead using small changes in the wing's shape for flight control.

The merging of both capabilities would offer unique synergies—using the aircraft's blended flaps and ailerons during terminal phases of flight or when rapid maneuvers are required, and changing the shape of the wing slightly for less demanding maneuvers during cruise.

These attributes are exciting for general and commercial aviation, but when trying to build an air combat aircraft with the smallest radar signature possible, they could truly be game changing—and they may even already exist in an operational or soon to be operational format.

Joints are not good for low observability, and flapping around control surfaces exposing those joints are especially bad. Large, seamless, continuously rounded structures that are edge-aligned to the general aircraft design are best for broadband low observability. Smaller pieces of an aircraft, such as its tails and control surfaces, may be able to stay hidden from higher frequency radar systems, like many fire control radars that operate on the X-band (and some that operate in the S and Ku bands), but at lower frequencies they could potential cause a glint on radar operators screens.

We live in a time when advanced computer processing is being applied to integrated air defense systems, which can cue multiple types of dissimilar radar and other sensor systems to search a single patch of sky. The data from these sensors can then be "fused" to create a single target track. So what may be invisible to one radar at one angle could be less so by another radar type viewing the same target from a different angle.

In the past stealthy aircraft like F-117 may have been visible on radar for short periods of time at certain angles, but not in a way that could allow fire control radar to engage the aircraft—at least without using special tactics and being in the right place at the right time. Electronic warfare support further guarded them from being engaged by enemy SAM sites. Today, as air defense systems become far more complex and networked and the fidelity of lower frequency radars is improved by advanced computer processing that can potentially provide "engagement quality" tracks, especially when their information is fused with various data from other sensors, broadband stealth is more important than ever. As such deep investment into morphing wing technology by major defense contractors and the Pentagon is a given.

The B-2 uses a series of split "elevons" as well as flaps and a moving "beaver tail" for controllability (some say it uses differential thrust as well). The smaller RQ-170 uses flaps and pop-out spoilers on its outer wing panels for controllability. Morphing wing technology could drastically lessen flying wing's reliance on jointed control surfaces, and eventually it could eliminate the need for traditional control surfaces altogether. Below are two videos showing how much these surfaces move both during tanking and refueling as the aircraft's computer brain keeps the unstable aircraft flying as if it were an inherently stable design:

The big question is how far along is this technology in the classified world? There has been talk about various testbeds that have flown to experiment with this capability dating back two decades. Even the Skunk Works flying wing P-175 Polecat demonstrator was supposedly built to test low-grade morphing wing capability that used a twisting wing strut design. That was over a decade ago, and since then there has even been talk that America's next generation bomber, what is now known as the B-21 Raider, could feature some elements of this technology.

Around the same time as the P-175 was being developed, Lockheed pitched the idea of using morphing wing skin for carrying addition fuel for their next generation bomber concept. They would bulge while filled during the early part of the bomber's mission, and then return to their stealthy shape once the gas is burned off.

It is all but fully admitted by the USAF that a high-flying flying wing reconnaissance drone, known unofficially as the RQ-180, took to the air around the turn of the decade and is likely operating today in a low density manner. This aircraft, which supposedly is a Northrop Grumman product, is said to be extremely low observable in nature and operates at U-2 like altitudes or above. A very efficient laminar flow wing design, one that would have minimal control surfaces but could change shape slightly during different phases of its mission, would be ideal for such a high-flying and very stealthy platform. As such, one has to wonder if morphing wing technology was built into the RQ-180 to even a limited degree, enabling it better achieve its super efficient and very low observable design goals.

As The War Zone detailed in a recent feature, B-21 is also going to operate at high altitudes, and is said to be an extremely low observable design. Although we know that mature and semi-mature sub-systems are being used on the aircraft to lower costs and risk, the airframe that these technologies will be packed into has to be cutting edge so that it can remain relevant over decades of service. On the other hand, by all indications it will have the same general shape as Northrop's original Advanced Technology Bomber design—before the low altitude penetration requirement was thrown on. This design was stealthier and higher flying than the final B-2 Spirit configuration as we know it today with its sawtooth trailing edge. Maybe this shape is old, but what makes up that shape will be anything but, with morphing wing technology built into the overall B-21 design.

Integrating even limited morphing wing capability into the B-21 would be a major precedent, and if Northrop Grumman already has that capability flying on another classified program, injecting it into the B-21's design would not be as high risk as it would otherwise.

Regardless of if the B-21 features such a capability or not, future stealthy airframes certainly will, including unmanned combat air vehicles which will eventually dominate the realm of aerial warfare. And better low observability, fewer parts—especially those that move—and enhanced wing efficiency is just the starting point for this technology. It is possible that future designs will be able to modify their aerodynamics significantly for different mission profiles or even phases of flight. And this doesn't just include expanding wing skins that can hold fuel or increasing the camber of a wing for landing and takeoff, but changing the wing's shape dramatically for loitering, maneuver, high-level, and low-level flight. Think of it as a new form of variable geometry wings, one where "swing-wing" designs of the past will look like antiques.

The ability to adapt to battle damage is another area where morphing wings may prove to be very useful for military applications. Today, if a combat aircraft loses critical control surfaces it may not be able to make even an emergency landing. But a morphing wing design could potentially compensate for such a loss, providing reduced maneuverability but still enough to see that the heavily damaged aircraft is recoverable. This could be done by tying the aircraft's fly-by-wire computer brain into the aircraft's controls surfaces, morphing wing control, and propulsion system. With proper programming, it could be able to provide controllability by using a mix of non-damaged control surfaces, morphing wing capability, and dynamic thrust control to get even a badly damaged aircraft home safe.

It is even possible that morphing wings could adapt their shape in response to threat stimuli around them. In other words, if a stealthy flying wing's onboard radar warning receiver and electronic support measures suite detects a threat radar emanating from a certain location, it could adapt its wing design instantly to best defeat that radar's particular operating frequency and line of sight angle, all without significantly interrupting the aircraft's course.

All this amounts to more survivable, adaptable, and capable combat aircraft, and it could even mean they will be cheaper to operate and maintain. And although we are still a little ways off from this exciting technology being applied in the commercial space, it is probably safe to say that it already exists, and even may be mature enough to be flying today in an operational form, in the murky classified realm of aerospace technology. And that is a very exciting possibility to comprehend.

Suffice it to say that future stealthy combat aircraft with morphing wing technology will be the definition of "more than meets the eye."