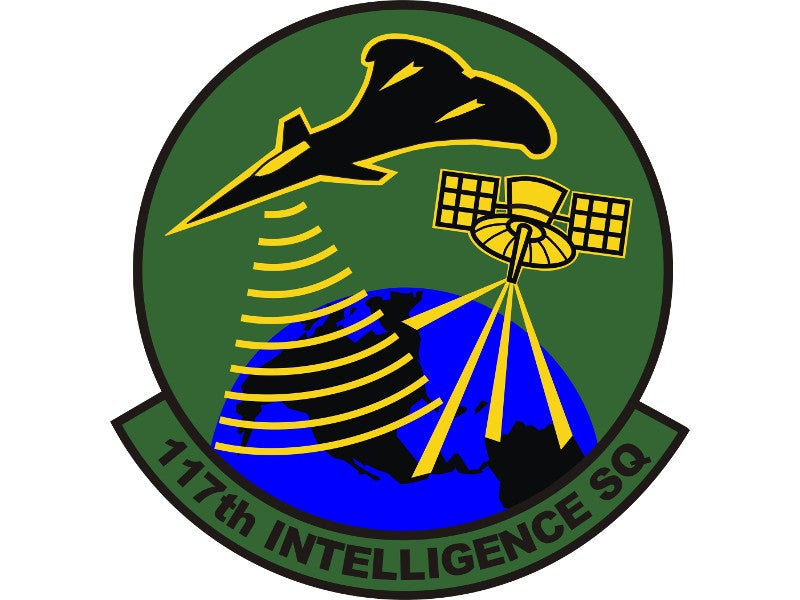 Military unit insignia can be weird, obtuse, and sometimes even a little problematic, but they can also offer important and interesting insight into the history and roles of particular units. There’s the mosque in U.S. Army North’s logo, the mysterious “Desert Prowler” patch with art lifted from an Insane Clown Posse album cover, and apparently one odd official reference almost certainly depicting the fictitious "F-19A Specter" stealth fighter.

The Alabama Air National Guard’s 117th Intelligence Squadron’s official insignia is pretty spiffy overall, including a satellite with beams pointing at Latin America and North America, as well as the shape of an airplane that looks very similar to the popular depiction of the F-19A emanating a series of waves beneath it. According to both the Air National Guard’s History Office and the U.S. Army’s The Institute of Heraldry, which manages official devices across the services and is a thing that you should know actually exists, the art dates to 1989 as the logo for what was then the 117th Reconnaissance Technical Squadron.

Here is the official description of the significance of the various devices:

"Blue and yellow are the Air Force colors. Blue alludes to the sky, the primary theater of Air Force operations. Yellow references to the sun and the excellence required of Air Force personnel. The globe reflects the worldwide observation technology of the Squadron. The aircraft signifies the reconnaissance and intelligence gathering missions performed by the unit’s airborne sensor capabilities. The satellite indicates reconnaissance and intelligence data obtained through remote sensing."

According to a historian at the Air National Guard History Office, the airplane itself is a “generic” design not intended to reflect any particular design. According to an overarching Air Force regulation it has to be this way to help make sure the insignia is as timeless as possible and doesn’t have to change as a unit receives new aircraft.

“Usually you see triangles and delta shapes and the like,” they explained to The War Zone in an Email. “The reason for this is because of the unchanging nature of heraldry. An emblem is supposed to last for generations, therefore we do not depict anything mission specific, because then the emblem would be mismatched or obsolete.”

The features in the design, though, seem too similar to the popular image of the F-19A for it to be a coincidence. Of course, that’s not to say that this is some final proof of the Specter’s existence. Most likely, it’s exactly the opposite.

For those who might not know the story, in the 1980s, the Air Force skipped the number “19” in the fighter category of the U.S. military’s official designation system. There had been the F-16, which beat out the YF-17, and then the F-18, which eventually became the F/A-18.

But in 1982, the Air Force, which manages the designation system across the series, gave Northrop Grumman’s Tigershark fighter jet the nomenclature F-20. There was immediate speculation as to what the F-19 might be, with the most common believe being that it was a long-rumored stealth fighter. Six years later, that plane emerged as Lockheed’s F-117 Nighthawk, perpetuating the belief that there was another design that remained highly classified.

This has been pretty conclusively debunked. Andreas Parsch, an independent aviation researcher, notes on his website designation-systems.net, citing official documentation, that the Air Force pretty clearly skipped F-19 in deference to a request from Northrop. The company hoped for major international sales of its Tigershark and argued for F-20 instead, suggesting that there might be confusion with the Soviet practice of odd number fighter nomenclature and the MiG-19 specifically.

Though this argument might seem dubious, the U.S. military's official aircraft and missile nomenclature system is full of exceptions and non-standard variations, as well as out of sequence numbers and lettered suffixes, many of which occurred purely to serve various marketing and political concerns. One good example was the desire to create an additional link between the C-130J Hercules and C-27J Spartan, which shared a number of common systems, including their engines. To make this happen, the Air Force agreed to skip eight suffix letters and go straight from C-27A to J.

The rumor persists to this day, but there has never been any confirmed evidence that the F-19 actually exists. A pair of Loral/Northrop ads supposedly for the Specter routinely circulates on the internet, the obvious suggestion being that they requested the F-20 designation to hide the stealth jet, but nothing to prove that they’re genuine. In addition, Northrop's failed competitor to the F-117, the XST, has become public knowledge and it looks more similar in shape to Lockheed's stealth fighter than the purported F-19.

There is, of course, always a possibility that another stealthy tactical platform design did exist from the era in small numbers, got shelved somewhere along the way, and/or still remains in the classified world. An operational penetrating tactical renaissance aircraft that could persist over the battlefield undetected remains a missing link in the shadowy history of stealth aircraft development from the period, an aircraft that would bridge the gap between Tacit Blue/BSAX demonstrator and unmanned aircraft with a similar mission set that began to emerge in the latter 1990s. But there is no reason why it would look like the F-19 or even have an F designation.

There's also the possibility that some combination of the Air Force, U.S. intelligence services, Northrop, decided to request and approve F-20 nomenclature as a means of deliberate disinformation to either confuse or distract opponents from looking too hard at actual stealth designs, such as the F-117 or B-2 bomber, which were very different from the supposed Specter planforms. If the general public was as interested in the missing "F-19," Soviet military intelligence was undoubtedly curious, too.

In the case of the the 117th Reconnaissance Technical Squadron’s logo, the design seems much more likely to have been an in-joke, especially since the unit doesn’t actually have any aircraft and didn’t at the time the insignia came into being. It might’ve seemed especially appropriate at the time given that the unit’s mission at the time was processing film from SR-71 Blackbird, U-2 Dragon Lady, and RF-4C Phantom II reconnaissance aircraft, interpreting that imagery, and then sending out the images and analysis to the appropriate places. It is also very possible, if not probable, that some sort of classified intelligence gathering aircraft also provided products to the unit, as such, the highly publicized and not at all sensitive F-19 would have been an ideal choice to denote such a secretive aircraft's affiliation.

In 1989, though, a year after the Air Force officially revealed the F-117, the continued rumor of the F-19 would have been well known to many aviation enthusiasts and even in more general popular culture. In 1988, MicroProse had released an F-19 computer game and Hasbro released the G.I. Joe X-19 Phantom, a clear reference to the jet.

There were numerous scale plastic models of the “mystery plane,” too. These represented what have become two most popular notional designs, the rounded, broader wing version linked directly to the reported Northrop/Loral ads and another narrower one that model maker Testors said took inspiration from the basic shape of the SR-71. The Testors model, other companies, such as Revell and Italeri, have sold since under their own brands, became one of the best selling kits of all time, with at least approximately 700,000 sales.

Today, the 117th Intelligence Squadron continues to perform similar functions as before, but now analysts review imagery from satellites and full motion video from drones, among other sources. They’ve supported 10 major operations since Desert Storm in 1991 and have helped process data for domestic emergencies such as the response to Hurricane Katrina in 2005 and the Deepwater Horizon oil spill in 2010.

They’re still using the same awesome insignia. If you happen to know anything more about its history, feel free to shoot us an Email or let us know in the comments below.