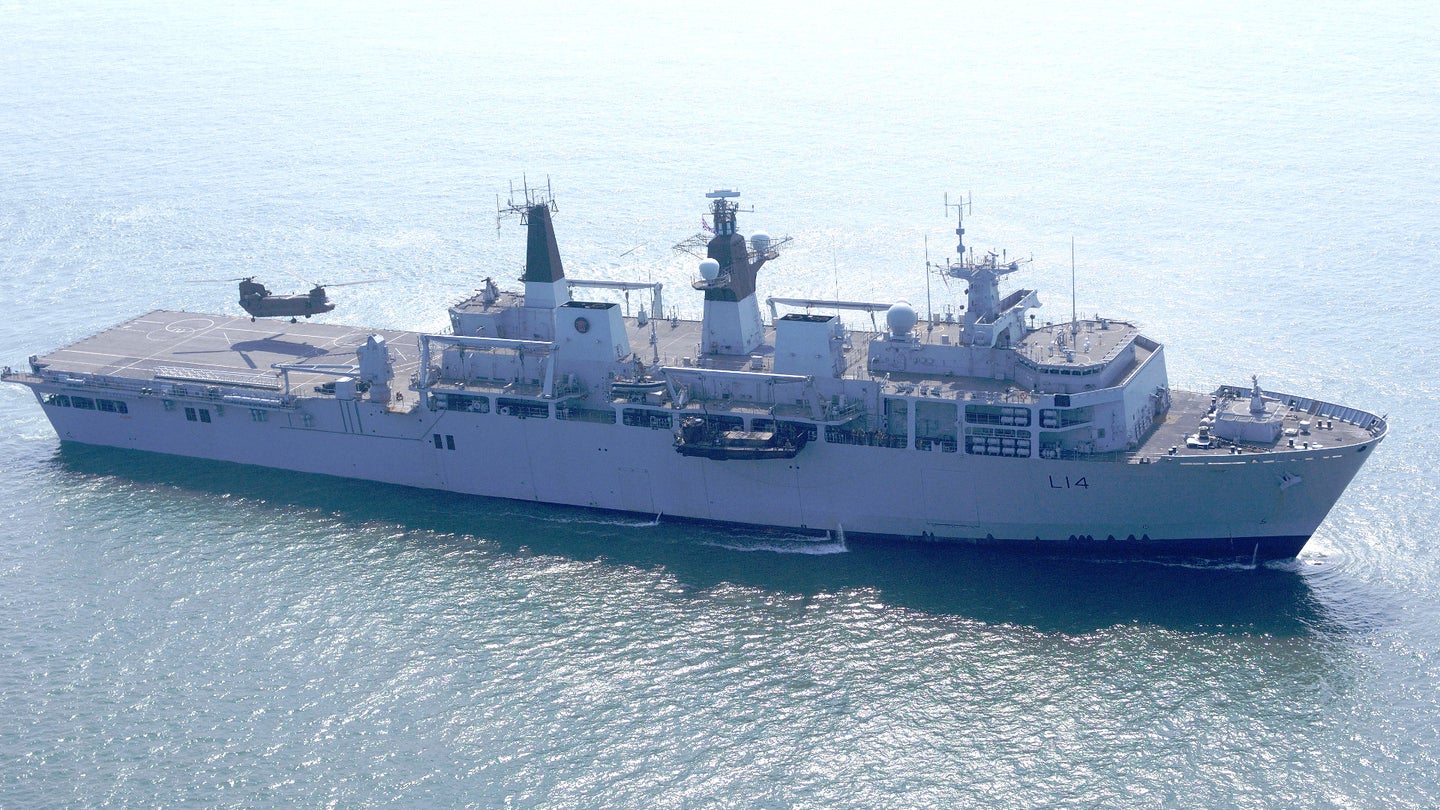 After the U.K. Ministry of Defense declared 2017 to be the "year of the Navy," there are a number of notable achievements in this area, including the aircraft carrier HMS Queen Elizabeth putting to sea for the first time and the start of construction of a new class of frigates. Unfortunately, personnel cuts and budget shortfalls mean the service may be considering gutting its amphibious warfare capability in favor of its forthcoming supercarriers, which would only call more into question its ability to perform large scale, independent operations, especially with those new ships.

On Oct. 5, 2017, the BBC reported that First Sea Lord Admiral Sir Philip Jones, the Royal Navy’s top officer, had assembled a variety of options to cut costs and otherwise shift resources. Among the possible courses of action, which were not mutually exclusive, were trimming the Royal Marines by approximately 1,000 personnel, the retirement of the amphibious ships HMS Albion and HMS Bulwark, and pulling a pair a smaller mine hunters and a survey vessel out of action.

“No decisions have yet been made and at this stage,” a Ministry of Defense spokesperson told numerous British media outlets, though they did not deny Jones had put together the list. “Any discussion of the options is pure speculation.”

The fate of Albion and Bulwark, along with the possible cuts to the Royal Marine’s 3 Commando Brigade, have so far drawn the most outcry from critics. The two-ship class of landing platform docks only entered service in the early 2000s and represents the bulk of the Royal Navy’s amphibious capabilities. Even more galling, the Albion just finished a refit worth 90 million Pounds, or almost $120 million at the present exchange rate, in September 2017 that was supposed to extend her service life out to 2030.

The service’s only other amphibious warfare ship, the helicopter carrier HMS Ocean, will head to the scrap yard in 2018 after just two decades of steady service, unless something changes. There are rumors that Brazil is interested in purchasing the vessel, but the Ministry of Defense has so far declined to confirm or deny that anyone is interested in buying it. Albion is supposed to take over from Ocean as the Royal Navy's flagship until the Queen Elizabeth reached initial operational capability in 2020.

Without Ocean, Albion, and Bulwark, the Royal Marines would have to rely either on ships of the Royal Fleet Auxiliary, a civilian mariner-manned service akin to the U.S. Navy’s merchant marine Military Sealift Command, or accept that its days of hitting the beach are essentially over. Cutting 1,000 members from the force, which has fewer than 8,000 personnel in total, wouldn’t help matters, either.

The other option would be utilize the Queen Elizabeth, or her sister HMS Prince of Wales, in the amphibious role, something that the Royal Navy has already suggested it is planning to do in the future, describing the configuration as being for "littoral maneuver." However, the ships would be unable to perform this duty and the functions of a fixed-wing aircraft carrier simultaneously, as each mission requires an entirely different air wing. Since neither flattop has a well deck, an issue the U.S. Navy ran into with the America-class, it would be hard, if not impossible for the Marines to make use of landing craft or hovercrafts to get ashore.

These issues could only limit the ability of the ships to support large-scale amphibious operations, as well as be available for traditional carrier missions. That’s before one even considers whether or not routine and potentially limited amphibious landings is really the best use of the pair of ships, which will each cost approximately 3 billion Pounds, or nearly $4 billion. Of course, there is also a long-standing debate as to whether or not amphibious operations remain a realistic method of operating in a world increasingly full of networked air and missile defenses, long-range anti-ship cruise missiles, and other defenses.

Regardless, there have been numerous examples in the past where military amphibious ships have shown the continued utility of these capabilities, even just for administrative landings, both during combat operations and in support of humanitarian relief efforts. Most recently, Ocean, full of aid and helicopters to distribute it, has been a major part of the United Kingdom’s relief efforts in British Overseas Territories in the Caribbean following Hurricanes Irma and Maria. The U.S. Navy has done the same by sending its own amphibious ships to the area.

But Admiral Jones’ may feel he has few other options. Even with a 1 billion Pound infusion from the Ministry of Defense, the Royal Navy may still be facing a budgetary shortfall. The United Kingdom’s top defense officials have been reluctant to publicly discuss budget issues, though they did deny reports in January 2017 that Prince of Wales would head straight for mothballs after its commissioning because of a budget gap of approximately 500 million Pounds.

Whatever the case, the BBC reported that its sources explained that the proposed cuts to the Royal Navy were a two-part effort to both save money and free up sailors to man the two Queen Elizabeth-class carriers. This in turn provoked more ire and raises additional questions about where the service will find the necessary resources to get the most out of those ships.

"This is the worst procurement decision of the past half century,” an anonymous Royal Marine officer told BBC, referring to the carriers, which will be the largest ships the Royal Navy has ever operated. “That's what the Royal Marines are being sacrificed for.”

We at The War Zone have repeatedly raised questions about the practicality of the two aircraft carriers given the Royal Navy’s capacity and needs. Most glaringly, the Fleet Air Arm doesn’t expect to have the first batch of F-35B Joint Strike Fighters, the centerpiece of Queen Elizabeth’s air wing, in operation until 2023, two years after the carrier enters service.

To make up for this, the service has already made a partnership with the U.S. Marine Corps that will see Queen Elizabeth sail her first patrol in 2021 with American F-35B Joint Strike Fighters rather than British aircraft. In the absence of real jets, deck crews are training for their future jobs with full scale models. But the ship’s aviation component, or lack thereof, is only one small part of the issue.

When Queen Elizabeth left port for the first time in June 2017, I wrote:

According to ACA [the Aircraft Carrier Alliance, the consortium building the Queen Elizabeth-class], the two new carriers will ultimately have a full crew of 1,600, including air wing personnel during cruises, but Queen Elizabeth is heading out with its core crew of 700 for her initial evaluation which won't include any air wing personnel. Even taking into account its smaller size, compared to a typical U.S. Navy carrier with its embarked air wing, both of these figures seem low. A Nimitz-class carrier has a crew of 3,200 without the air wing, which raises the final total to over 5,500 personnel.

Beyond the issues with carrier's aviation element, there is just the matter of what it takes to support one carrier, let alone two. No matter how their air wings are configured, the Royal Navy would need to commit significant numbers of escorting ships, such as destroyers, frigates, logistical ships and submarines to each deployment. A typical U.S. Navy carrier battle group includes a guided missile cruiser, three destroyers, and at least one Los Angeles-class attack submarine, not mention the logistical ships that support the Strike Group. As of 2017, the Royal Navy had six Type 45 destroyers and seven Astute- and Trafalgar-class attack submarines in total, plus another 13 Type 23 frigates. This all calls into question the ability of the Royal Navy to operate both ships by itself and may imply a need for increased cooperation with allies, such as the United States, for expeditionary or forward-deployed operations.

If the Royal Navy is already cutting ships to find sailors to properly staff Queen Elizabeth and Prince of Wales, one has to wonder whether it has enough personnel to adequately operate the other ships it will need for its carrier battle groups. We’ve already seen what happened to the U.S. Navy as it tried to make due with overworked crews aboard already undermanned vessels.

At present, the service isn’t even expecting to buy enough new Type 26 frigates to replace the aging Type 23s on a one-for-one basis. There are plans to add five Type 31e “general purpose frigates” to the eight City-class ships, but these vessels by their very design will be less capable and possibly ill-suited to carrier escort work depending on their final configuration.

But even with an entire new fleet of frigates, its unlikely that those ships would ever all be in service at once, if only due to the need for routine maintenance and upgrades. The Royal Navy's readiness troubles and budget woes could have an impact there, too. As of July 2017, four of the six Type 45s and nine of the 13 Type 23s were pier side either undergoing repairs or overhauls or laid up waiting for that work to start. More recent exercises suggest that the United Kingdom might be considering making up the shortfall by operating in concert with other NATO allies as a matter of policy.

There doesn’t seem to be universal sympathy for the Royal Navy’s plight at the Ministry of Defense, though. At least one anonymous official who talked to the BBC also seemed annoyed that the service had continued to push for its new carriers, as well as a raft of other shipbuilding, even as the budget situation became increasingly dire. At present the Royal Navy is working to add the two Queen Elizabeth-class carriers, replace its Vanguard-class nuclear ballistic missile submarines, build the new Type 26s and additional Astute-class attack subs, and add a number of other small patrol boats, all at once.

“The Royal Navy has got us into this mess,” the senior Ministry of Defense officials, who BBC described as a “senior figure,” said. “So it's up to them to take the pain necessary to get us out of it.”

Looming in the background to all of this, of course, is the United Kingdom’s plans to leave the European Union following a controversial national referendum, a process known as the British Exit or Brexit. The country’s economy has already entered a slump as private business tensely watch government officials stumble through plans to negotiate new trade deals and other agreements with the rest the continent and further abroad. The value of the Pound has already fallen to its lowest point in decades.

There are reasonable fears that all of this could prompt even further budget cuts, including to defense spending, as well as curtail or cripple supporting industries. Shipbuilding in particularly is a notoriously long-lead time affair, requiring a significant investment in infrastructure and skilled labor up front, with costs going down only as production gets going and only if new orders remain relatively steady.

Every time a major layoff occurs or a shipyard shuts down, it resets the process. So it’s not a particularly good sign that BAE Systems, part of the Aircraft Carrier Alliance and parent company of the Govan shipyard that will be churning out the Type 26s, announced plans to cut 2,000 jobs across the United Kingdom, including 340 working at the Royal Navy’s Portsmouth Naval Base, Queen Elizabeth’s homeport, earlier in October 2017.

However he decides to proceed, it seems clear that Admiral Jones will have to make some hard decisions in the near future. A certain point, though, cutting more things will only lead to diminishing returns, especially if the First Sea Lord has to keep poaching sailors from one set of ships to fill the billets on others.