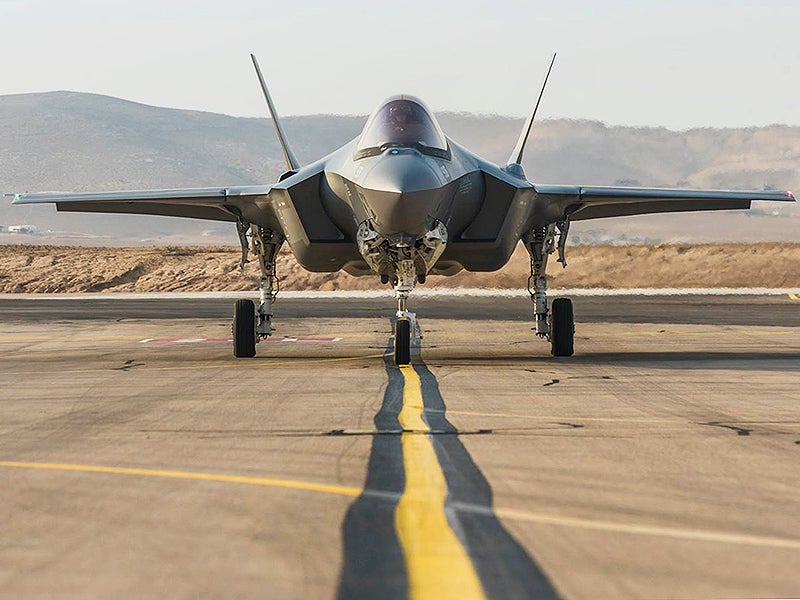 A day after Israel's counter attack on a Syrian SA-5 surface-to-air missile site we are learning more about the incident, and unfortunately, some questionable outlets and commentators are spreading rumors that imply one of Israel's F-35Is was the aircraft targeted by Syrian missiliers, and that the aircraft was damaged in the attack.

It appears that the first sortie put "more than one" aircraft “within the effective range” of the Syrian SA-5 missile that fired at the flight according to an Israeli Defense Forces spokesman. The engagement supposedly occurred at around 9AM local time. It remains unclear the exact mix of Israeli aircraft that were in the air at that time. Some reports state it was a flight of F-16s, others tell us it was a composite flight including an F-15C executing photo reconnaissance duties while operating closer to the border than its escorts. As mentioned in our first article on the incident, the F-15C is known to carry large tactical reconnaissance pods for the IAF.

A follow-up sortie was launched by Israel roughly two hours after Syria fired at its jets, with this one is confirmed as being made up of F-16s. These aircraft prosecuted the attack on the offending SA-5 site east of Damascus. Four air-to-ground weapons, described officially as bombs, which can mean quite a few things considering the IAF's unique weapons inventory, were delivered on the SAM site. The attack was centered on the site's fire control radar/emitter and was not a wide area barrage on the SA-5 missiles arrayed around it. The emitter was destroyed or damaged to the point it was no longer operational according to IAF bomb damage assessments.

As we noted previously, Israel maintains that all its aircraft returned to base unscathed, while Syria claims they scored a hit on one of the fighters during the initial SAM attack. The Assad government usually claims false victories anytime something like this occurs. But some have taken an unrelated report about an F-35I, one of just seven in Israel's inventory at this time, being damaged by a bird strike as some sort of coverup for an F-35I being successfully targeted and hit by the Syrian SA-5 while over Lebanon. In other words, under this theory the reconnaissance aircraft was an F-35I.

Although we can't rule out the possibility that an F-35I was operating over foreign territory, it is unlikely. In fact, we have been down this same road before. Israel has not achieved initial operations capability (IOC) with its F-35 fleet as of yet, so sending it into harm's way on an operational sortie seems like a very odd and reckless choice. Even though the Israelis have rushed fighters into service in the past for unique operational needs, the F-35I is an especially delicate procurement topic for the Israeli government. Israel's lawmakers have publicly noted the high cost of the aircraft and have stated that they will "meticulously assess" the need for more F-35 purchases past the first 50 ordered. So risking the new jets before they are actually operational on a seemingly standard mission would be an odd if not reckless move by the IAF.

Even assuming the F-35I was the aircraft targeted over Lebanon, the chances of it being hit by an SA-5 are very slim, and the bird strike now being reported by the IAF supposedly occurred two weeks ago with the aircraft being grounded since awaiting a Lockheed team's inspection and subsequent advice on how to best repair it.

You are probably asking yourself how there is any chance a stealthy F-35 could be targeted by Syrian SAM site in the first place? It is known that Russia and Syria have now integrated their air defense systems together, so data sharing by some of Russia's more advanced sensors could make spotting a stealthy aircraft easier. Also, the F-35, which is optimized for hiding from higher frequency radar systems, like prevalent X-band fire control radars, could possibly be spotted by operators using lower frequency tactics and systems. But even if the F-35I was detected, that still doesn't mean it could be reliably tracked and engaged. The aircraft also has an advanced electronic warfare suite to repel such attacks.

Considering the information at hand, conspiracy theory-like reports of an F-35I taking damage from a Syrian SA-5 seem to be a lame attempt at attacking the F-35's capabilities, American made air combat technology, and the IAF's claims of air superiority in the region.

And although we cannot rule the possibility out entirely, as Freud would say—sometimes a bird strike is just a bird strike.