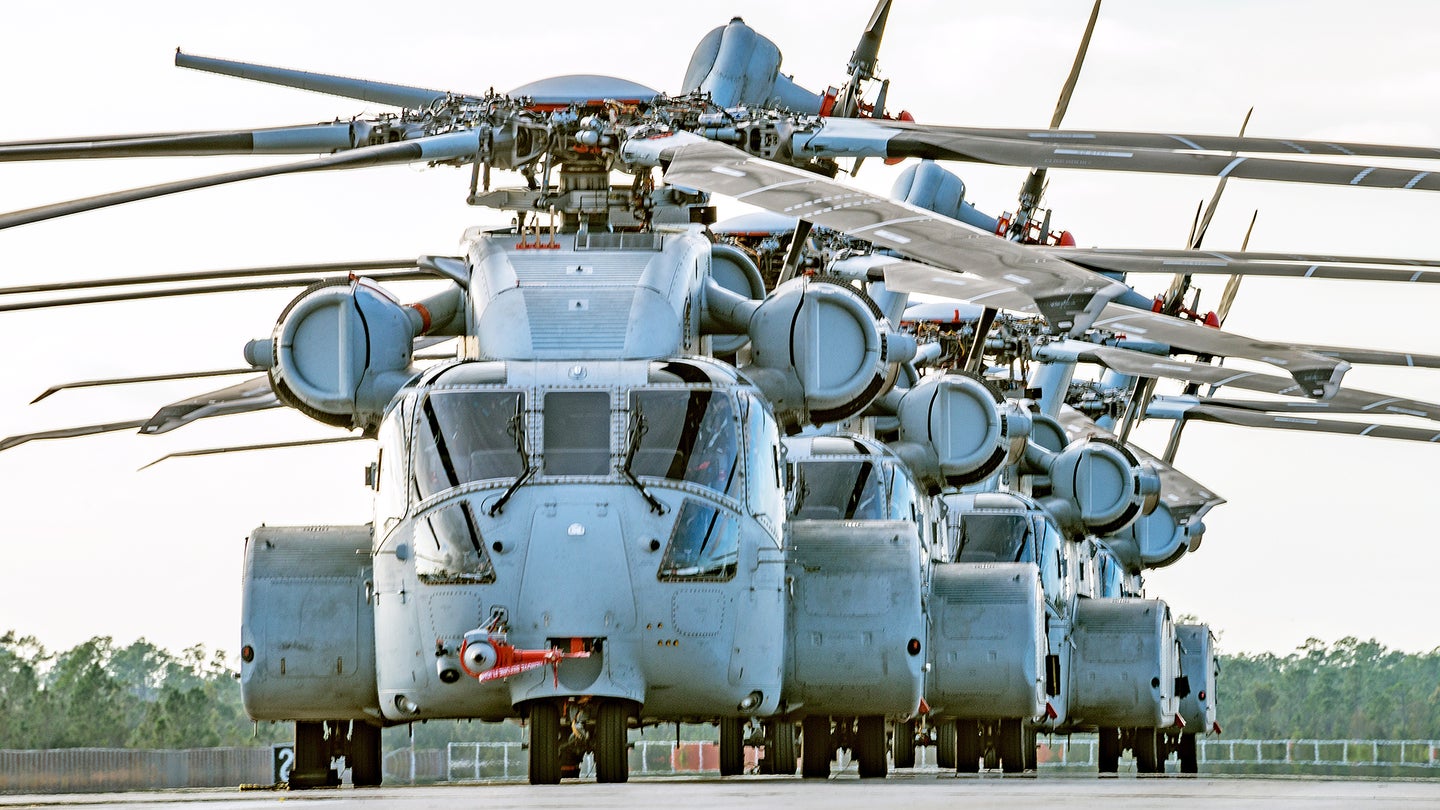 The massive Sikorsky CH-53 turns 53 today. It's pretty amazing to think that the "Stallion" took its first flight on October 14th, 1964 and the type is now entering its third major iteration in the form of the immensely powerful CH-53K King Stallion. As they say, the only thing that can replace a CH-53 is a better CH-53! This is something Israel seems to have recently learned in a very hands-on fashion.

Our friends at Flightglobal.com report that the Israeli Air Force has halted its evaluation of the MV-22 Osprey—which was supposed to be prelude to an initial order of a half dozen of the tilt-rotor transports to begin replacing the IAF's aging CH-53Ds, stating:

"The Israeli air force has frozen its evaluation of the Bell Boeing V-22 Osprey, with a senior defense source indicating that the tilt-rotor is unable to perform some missions currently conducted using its Sikorsky CH-53 transport helicopters."

This is a testament to the half century old Sikorsky design, and although MV-22 is a remarkable aircraft for certain missions, such as combat search and rescue and long-range infiltration, even the twin-engined Sea Stallions, commonly referred to as "Deltas," remain superior in other respects.

The last decade hasn't been so kind for the Pentagon's triple-engined H-53E variants. To put it frankly, the fleet has been ridden hard and put away wet. Neglect on a systemic level first hit the relatively small MH-53E Sea Dragon minesweeping community, with deadly crashes resulting in major operational changes.

Not long after scrutiny fell upon the Navy's Sea Dragon fleet we learned that the CH-53E community that the USMC depends so dearly on for heavy vertical lift support was also in shambles.

I detailed how miserable of a state the CH-53E fleet and its community were in February of 2016, writing in part:

"The confidential independent study ordered by the Marine Corps found a litany of issues, including the fact that force size has dropped to just 146 Super Stallions—50 less than what is needed. If the U.S. were to go to war, even in a limited fashion, nearly every airframe would have to deploy. This leaves nothing for stateside training, contingency operations or war reserve.

Making matters worse, major parts shortages and years of deferred maintenance plague the fleet. Most astonishingly, this has led to a readiness of just 23 percent. This is less than one third of the Pentagon’s general readiness target of 75 percent for its military aircraft.

With a readiness rate of just 23 percent and just 146 CH-53Es in inventory, only 33 aircraft are actually available at any given time."

At the time, CH-53E pilots returning from combat deployments were getting only 30 flight hours over six months. Spare parts availability was dismal and the Marines had all but forgotten to invest in the critical capabilities the Super Stallions provide, instead prioritizing buying $65M Ospreys and $125M F-35Bs instead:

"The CH-53E fleet has been at war for the last decade and a half. The Army realized just how brutal a toll prolonged fighting in the deserts of Iraq and the mountains of Afghanistan took on its air assets that they budgeted $1.2 million for “resetting” each of its helicopters when they returned from combat overseas. The Marines, on the other hand, budgeted less than a tenth of this amount, setting aside just $100,000 per helicopter to get them refreshed.

Now the Marines are paying for this stinginess and lack of foresight in an embarrassing and crushing way when it comes to combat readiness...

The way the Marines aim to fix the problem is to spend about half of the $650 million set aside this year (roughly equivalent to two and a quarter F-35Bs or five MV-22 Ospreys) to reset the Marines ailing air arm on resetting the CH-53E fleet. The goal is to get the entire Super Stallion fleet back in order and its crews back to mission ready status by 2019. Additionally, two H-53Es that were in storage are being brought back to life by Erickson Incorporated and will be inserted into the fleet in the coming months."

Making things worse, the loss of two Super Stallions during a night training mission near Oahu on January 22nd 2016 turned up some appalling realities of squadron life in a CH-53E unit, including the lack of training many of its aviators were receiving. Low aircraft availability was clearly a contributing factor to the tragedy.

Since all this came to light, NAVAIR's  three year effort to reset the CH-53E fleet, during which 16 airframes are undergoing a deep overhaul at any given time, and other investments in training and spare parts has garnered major improvements in readiness for the CH-53E fleet. But just last week a CH-53E caught fire while flying over Okinawa, forcing it to make an emergency landing. The helicopter was totally destroyed and the incident has since been classified as a Class A mishap ($2M in damage or loss of life/permanent disability), leading to a 96 hour stand-down of Super Stallion operations out of Okinawa.

The incident is under investigation but it is yet another reminder of the fact that the CH-53E force, including rehabbed airframes, is aging rapidly. Although the helicopter still features incredible maneuverability as well as high-speed, heavy lifting, and high-hovering capabilities, those can only be put to use when the aircraft is actually in mission ready condition. But thankfully there is a replacement on the horizon—one far more mighty than even the Super Stallion it will replace.

Enter the CH-53K King Stallion. I have profiled Sikorsky's next iteration of the H-53 in the past, and to suffice it to say, it is one exciting although terribly expensive flying machine. But the capabilities it provides are absolutely essential to the USMC's mission.

With a combined 22,500hp surging through its three turbines—roughly 50 percent more power than its predecessor—the aircraft's top speed will near 200kts and it will have a maximum gross takeoff weight of a whopping 85,000lbs. It also sports 15 percent more internal volume and a host of other improvements, many of which are aimed at making the aircraft far more reliable and less maintenance intensive than the notoriously finicky Super Stallion. It will also be much more adaptable to future technologies.

The King Stallion had seen its fair share of delays, but it is now deep in testing with four test and development aircraft being put through their paces. Just last August the Navy awarded Sikorsky a $304M contract for the first two CH-53K destined for active service. The aircraft will be delivered in 2020, at which time production will hit 24 airframes per year and the CH-53E can finally begin being retired.

The CH-53K is also attracting interest from overseas air arms which could result in sales beyond the 200 the USMC plans on purchasing. Israel very well may end up procuring it instead or even in addition to MV-22s, especially in light of the recent news mentioned at the start of this article. Germany is also interested in the type to replace their CH-53Gs—which are upgraded versions of the CH-53D. Japan, which has flown a version of the MH-53E Sea Dragon could also be a future customer. Other air forces, many of which fly the H-47 Chinook, could also be potential purchasers of the King Stallion once it matures into an operational state.

Regardless of its most recent woes, the CH-53 remains an amazing helicopter that has taken part in some of the most well known military air operations in modern history— both good and bad. With the King Stallion on the way it is likely the type's legacy will continue for many decades to come, with the possibility of one day celebrating the Stallion's  75th, or even 100th birthday a real possibility.