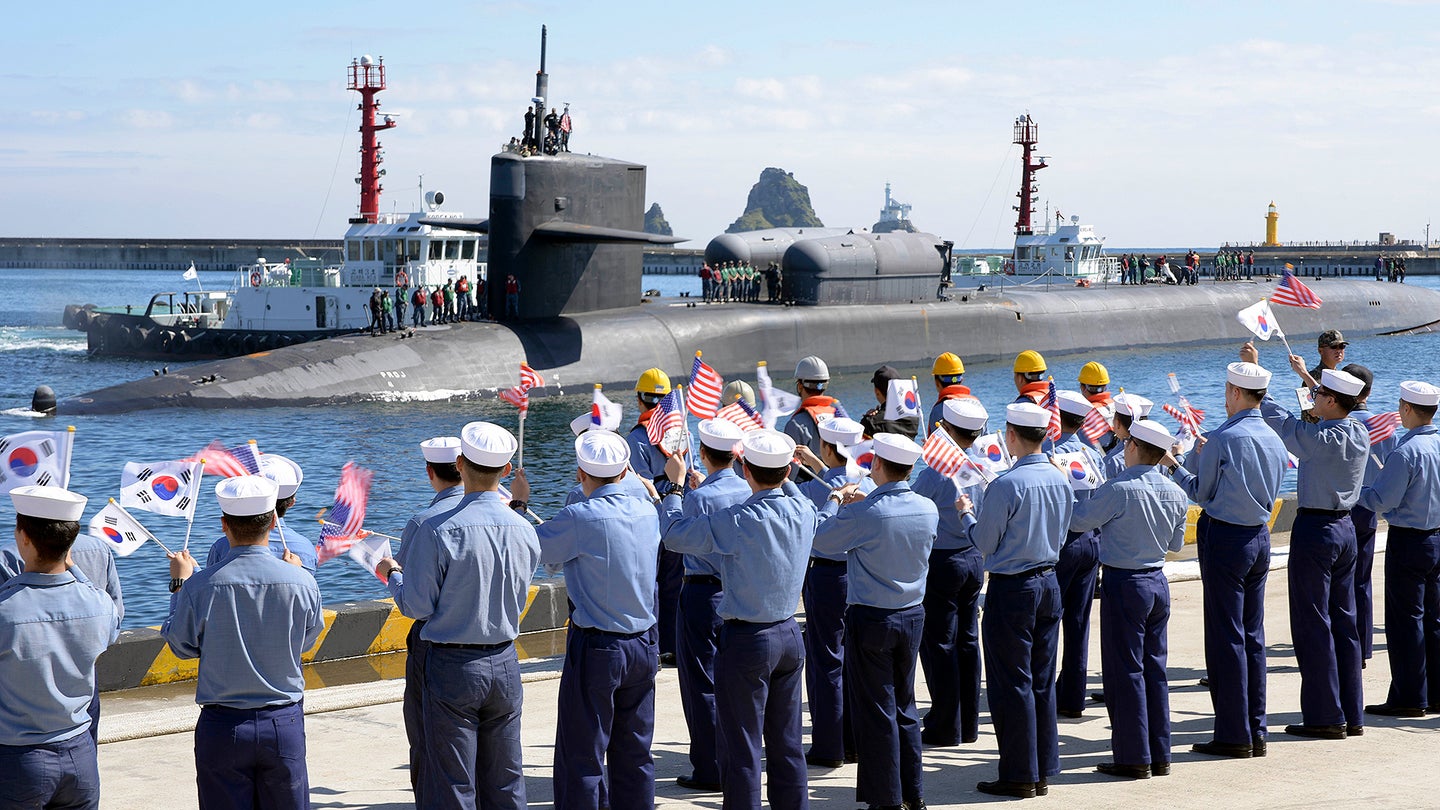 Some of the most powerful vessels in the U.S. Navy's arsenal are descending on South Korea for port visits before executing large scale naval drills with the Republic of South Korea Navy. This includes the arrival of the Ohio class nuclear guided missile submarine USS Michigan today and the Los Angeles class nuclear fast attack submarine USS Tucson just days ago. The supercarrier USS Ronald Reagan will arrive at the port of Busan next week along with her escorts. Unsurprisingly, North Korea is very unhappy about the naval buildup and has once again threatened a missile launch towards Guam before the drills commence.

North Korea's threat to demonstrate a nuclear capable ballistic barrage near the U.S. territory of Guam is nothing new. This summer, as rhetoric between the U.S. and North Korea hit a crescendo, Pyongyang made the same threat, but after Kim Jong Un reviewed the plan, he supposedly decided to "wait and see" how events progress before executing the provocative launch.

None of this means Pyongyang won't execute such a plan now, especially as the relationship between the two countries has entered uncharted territory following North Korea's hydrogen bomb test in early September and the exchange of top-level diplomatic unpleasantries at this year's U.N. General Assembly.

The high profile port visits aren't just a matter of R&R and cultural outreach for the ships' crews, far from it in fact. Just like the now constant bomber flights over and near the Korean Peninsula, they are meant to be major shows of force aimed at North Korean consumption. A similar display, minus the nuclear fast attack submarine, occurred earlier this year with the supercarrier USS Carl Vinson and USS Michigan calling on Busan last Spring as the relationship between the U.S. and North Korea began its steeper descent.

Next week's naval drills will supposedly feature a large counter special operations element, with activities occurring in both the Sea of Japan and the Yellow Sea. North Korea's special operations units are tasked with infiltrating deep into South Korean territory in the opening hours of a conflict, where they will take down high value individuals, attack command and control targets and bases, as well as wreak havoc on infrastructure and the general populous. Insertion methods include low altitude night intrusions by throngs of AN-2 biplanes, tunnels that run under the DMZ, and even paragliders would be used to cross over the DMZ.

But North Korea's most menacing and perhaps its forces' most trained for insertion method of all is via small boat, midget submarine, or by diesel electric submarine which will allow commandos to get close enough to the coast at night to wade ashore. With this in mind, training to detect and engage these threats before they land on the beach is probably a very high priority these days for the Republic of South Korea Navy and the U.S. Navy.

Besides its 154 Tomahawk cruise missiles, which would rain down on targets in North Korea during the opening moments of a conflict, the Michigan is specially equipped to carryout clandestine special operations missions, and was seen with two dry dock shelters attached to its spine when it pulled into Busan. The Tucson can also support smaller detachments of Navy SEALs.

The 7th Fleet has integrated special operations units more aggressively into its carrier strike groups in recent years as well, and SEALs and MARSOC detachments work from the flattops and their escorts, in this case the Arleigh Burke class destroyers USS Stethem (DDG 63) and USS Mustin (DDG 89).

With the big naval drills looming, we'll see if North Korea lashes out, and hopefully it won't be via another nuclear detonation. North Korea's Punggye-ri test site seems to have become very unstable since the last blast, leading to major concerns over a potential release of radiation. If it is unusable, it could be an additional reason why North Korea has threatened a mid-ocean nuclear test recently.

There have been reports that multiple North Korean missiles have been seen being moved to launch sites as of this evening, and that very well could be, but it seems like we get these reports virtually every weekend now.

Although rumors persist of back channel negotiations between the U.S. and North Korea, it could be that Kim Jong Un has decided another escalation is needed. That escalation would likely be a downrange multiple IRBM test, likely targeting waters off Guam as promised, or the test of another ICBM.

“We have missiles that can knock out a missile in the air 97 percent of the time, and if you send two of them, it’s going to get knocked down.”

This of course isn't accurate. As we have discussed in detail, America's so called missile shield is far from a perfect antidote to ICBM attacks. Many variables go into a successful intercept, and the real world is different than controlled test conditions, especially if multiple missiles are launched at one time. The fact that the President thinks completely otherwise may be unnerving to some as it invites more aggressive and risky policy decisions toward the so called Hermit Kingdom.

We'll keep an eye on the region over the weekend and will report if something major occurs.