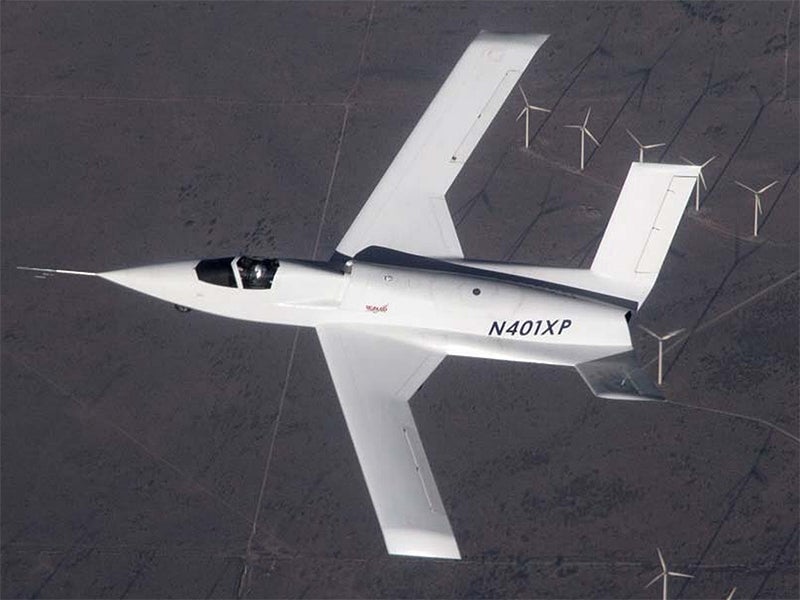 "Scaled Composites is proud to announce the rollout and first flight of its most recent project, experimental aircraft Model 401. Scaled worked with a proprietary customer to build two vehicles to demonstrate advanced, low-cost manufacturing techniques and to provide aircraft for research flight services to industry partners and the United States government.The two vehicles were designed to be identical in outer mold line and performance, with each aircraft powered by a single Pratt & Whitney JTD-15D-5D engine with 3,045 pounds of thrust.

The vehicles are capable of flying Mach 0.6 with a service ceiling of 30,000 feet and have a wingspan of 38 feet and are 38 feet long. They have an empty weight of 4,000 pounds and a maximum take-off weight of 8,000 pounds with an endurance of up to three hours.Aaron Cassebeer, Project Engineer said, “This is such an exciting time for us. Scaled is at the forefront of experimental aircraft development and I am fortunate enough to have a front row seat.” He went on to say this about the mission, “Today was a great day for our test team. We had a great flight and we are looking forward to the future test program.”This successful first flight is the beginning of the flight test phase for vehicle number 1. The Scaled team plans to continue envelope expansion on the first aircraft as they move toward first flight of the second Model 401 vehicle."

The aircraft has an extremely similar design as General Atomics' Avenger/Predator C unmanned combat air vehicle, albeit about half the scale. So it is likely that the customer Cassebeer mentions is General Atomics, but we can't say that with absolute certainty.

The Avenger could be on the verge of a major breakthrough in international sales, with India looking at purchasing a sizable fleet of the stealthy unmanned aircraft. A less stealthy version of the Avenger is also being offered up for the Navy's carrier-based unmanned tanker tender, which we saw our first renderings of just yesterday.

Having a manned platform for surrogate testing is advantageous as unmanned aircraft realize operational efficiency in the back half of the development curve. In other words, in some cases you can more quickly test and develop technologies using manned assets than unmanned ones. It could also be that General Atomics is looking to build a smaller version of the Avenger, with a lower ceiling and less endurance, and this is manned surrogate for the program.

On the other hand, the aircraft could also be used for general low observable platform testing and could replicate stealthy medium altitude, medium endurance (MAME) unmanned aircraft, with it only resembling Avenger. Other Scaled Composite aircraft have been used for similar purposes in the past, including the pint-sized Ares and the high-flying Proteus.

We will keep you informed as more info on this incredible looking flying machine becomes available.