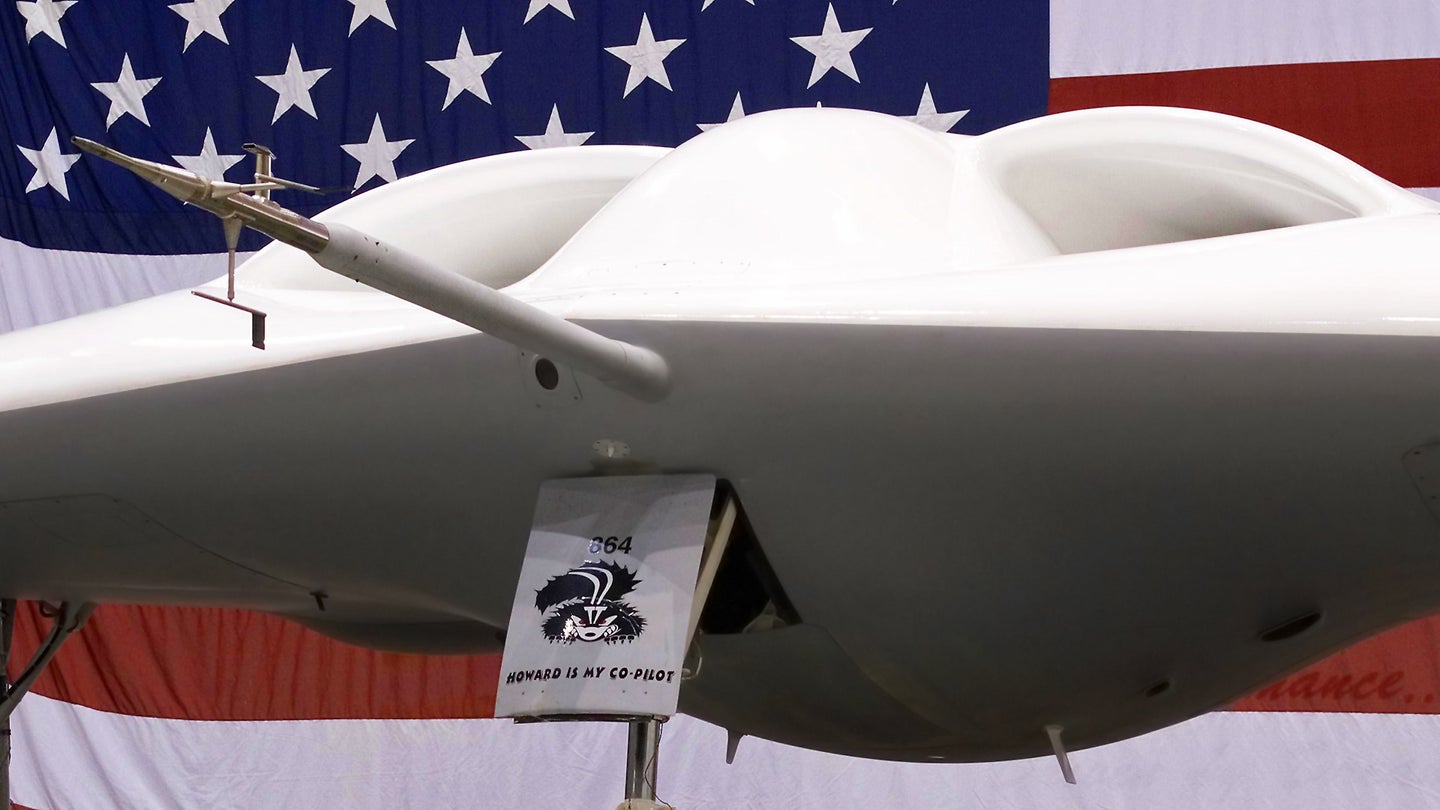 Last June, we talked in depth about the Missile Defense Agency's initiative to field an "Airborne Laser 2.0" of sorts that can shoot down enemy ballistic missiles during their vulnerable boost phase. But this time, instead of massive 747 carrying a chemical laser system, this new program looks to mount a much smaller solid state laser on a high altitude, long endurance (HALE) unmanned aircraft that can fly nearly at U-2 altitudes, above 65,000 feet, and loiter for 36 hours at a time.

Lockheed Martin won the latest contract that is part of this initiative to provide what is being called the Low Power Laser Demonstrator (LPLD). This system seeks to first test a low power laser system on a high-flying unmanned aircraft capable of tracking and engaging ballistic missiles during their boost phase. Integrating a high power laser system will come in a follow on phase to the overall program.

A major part of phase one of this program will be to show how a system can fire a laser over long range without turbulence and atmospheric dispersion weakening the beam's focused energy of its target. Using a high-altitude platform goes a long way in attenuating these issues as the atmosphere is far thinner than at the typical altitudes airliners and especially most unmanned vehicles fly at. Also, the air is smoother at high altitudes and flying above the weather means clouds and water particles aren't likely to interfere with a boost phase engagement. Finally, the higher an aircraft flies the farther many of its sensors and terrestrial communications can reach due enhanced line of sight.

Lockheed Martin has committed millions of dollars to directed energy research and development, laying the groundwork for the laser technology that brings us much closer to an operational system capable of intercepting a missile in its boost phase."

This is all fine and good, and clearly being able to fry ballistic missiles while they climb out and are still flying within their owner's borders has become a much more pressing issue in light of recent developments in North Korea and even Iran, but one stark question remains:

What platform is Lockheed intending on using for this task?

Phase One of this contract is worth less than $10M and will be completed by mid Summer, so this points to an unmanned aircraft that Lockheed already has in its stable. But officially the company doesn't have a HALE drone. So either a manned surrogate will be used, which goes against the program's stated goals of proving an unmanned capability, or Lockheed has something readily available that it can repurpose for the demonstration.

Adapting one of the company's RQ-170 Sentinels, an aircraft that still operates very much in the shadows, is a possibility but by most all accounts it is not a HALE unmanned aircraft. Instead the stealthy flying wing drone is thought to operate at altitudes upwards of 50,000 feet and have an endurance of less than 16 hours. This puts it in the higher end of the mid-altitude, medium endurance (MAME) category.

Still, for this first demonstration, maybe the Sentinel's performance will be close enough to a higher-flying operational system that will be down the line. But by Lockheed executive Sarah Reeves own words, the company seems to have a true HALE system they intend to use.

The only true HALE drone we know of for certain that came out of Lockheed is the Skunk Works' P-175 Polecat technology demonstrator. This flying wing with a very stealthy shape was created in the early 2000s as an internal program aimed at rapidly bridging a perceived gap in unmanned capabilities between Lockheed and its competitors.

The aircraft served as an experiment in applying the latest rapid and large structure composite manufacturing processes of the time, as well as to develop command and control interfaces for semi-autonomous drone systems, something both Boeing and Northrop Grumman were being paid to do by the Pentagon at the time. Also the aircraft's mission, to cruise at high altitude was a major challenge in itself as that flight regime is notoriously unforgiving, and especially so for a tailless flying wing design. It also used a very low observable shape, the same one that is being used by the USAF's next stealth bomber, the B-21, an aircraft that The War Zone discovered also likely has a very high operational ceiling.

The aircraft had a 90 foot wingspan, was powered by two FJ44 engines, and most importantly, had a designed operating altitude of 65,000 feet—exactly where the Missile Defense Agency's capability requirements lie.

Although the Polecat demonstrator crashed in December of 2006 due to an egregious operator error just as its flight testing program was developing, it seems as if Lockheed built more officially undisclosed copies, ones it has hung onto for some reason for over a decade. These have been photographed by satellites time and again at the company's Skunk Works facility in Palmdale, California.

Although the supposedly short-lived Polecat is thought to have had a huge impact on the RQ-170 Sentinel program and Lockheed's Long Range Strike Bomber contender, the aircraft could possibly be revived for the Missile Defense Agency's testing program, especially if indeed those extra fuselages can be rehabbed and put into service at low cost.

Lockheed could also have put forward an unmanned variant of the U-2S Dragon Lady, a program the Skunk Works has pushed for years now and one that would cut development time dramatically via leveraging existing and proven components. Originally this concept, which was aimed at displacing Northrop Grumman's HALE RQ-4 Global Hawk drone, included using large parts of the U-2's airframe, but later it was changed to primarily using its engine and reconnaissance payloads.

This mostly new airframe has been dubbed the TR-X and although it would have some low observable attributes, Lockheed officials have described it as a no-nonsense "sensor truck." But unless Lockheed secretly fielded a prototype of this aircraft, it is very unlikely they could develop it into flying form for such a short-term program as the LPLD.

Finally, it has been rumored that as the Long Range Strike Bomber (LRS-B) contract took shape, Lockheed fielded a self-funded technology demonstrator to lower risk and better compete with Northrop Grumman on the tender. Northrop Grumman is known to have a very stealthy HALE drone, the unofficially named RQ-180, in operation, as well as possibly a next generation bomber demonstrator from the mid to late 2000s. It was rumored that Lockheed technology demonstrator aircraft leveraged an airframe that was already largely built. Whether that was a P-175 Polecat or not is unclear, but that very well could be as Northrop Grumman's winning design used a very similar planform as did Boeing and Lockheed's supposed entrant. In fact, the consortium's LRS-B tender looks like a much larger P-175 Polecat, including featuring its unique intake and exhaust configuration.

If that is the case, Lockheed Martin could have a near perfect LPLD platform on hand, one that could even possibly exceed the MDA's test requirements. Considering the contract is only around $10M, such a play would be to offer a highly developed solution without the development dollars needed to field one from scratch. In essence, Lockheed would be providing the host platform largely for free in an attempt to capture larger contracts to follow. Considering there aren't many aircraft contracts up for grab these days, if the Missile Defense Agency were to field a fleet of these aircraft to keep at least one on station at all times over the Korean Peninsula and the Persian Gulf, it could end up being a very lucrative an unique long-term business opportunity.

It is possible that Lockheed has something else up their sleeve that remains classified as well. The Advanced Airborne Reconnaissance System initiative, nicknamed Quartz, of the 1980s and early 1990s for instance supposedly never led to a flying aircraft, but that may not be the actual case. Although unlikely, it is possible that an airframe is left over from testing done on that project decades ago, but by most accounts the P-175 was sort of the heir to the research done on Quartz.

Whatever the platform Lockheed intends to use for this program obviously it must have been part of a very attractive package as the Missile Defense Agency chose Lockheed's proposal over multiple other highly capable defense firms which all included a proposed HALE unmanned aircraft.

With a goal of fielding an operational capability by the early 2020s—an aggressive timeline to say the least—it's downright exciting to see things move ahead at such a fast clip. And seeing that this capability could be a true game changer, especially in regards to the showdown with North Korea and our current reliance on kinetic interceptors and their complex support infrastructure, it couldn't come fast enough.