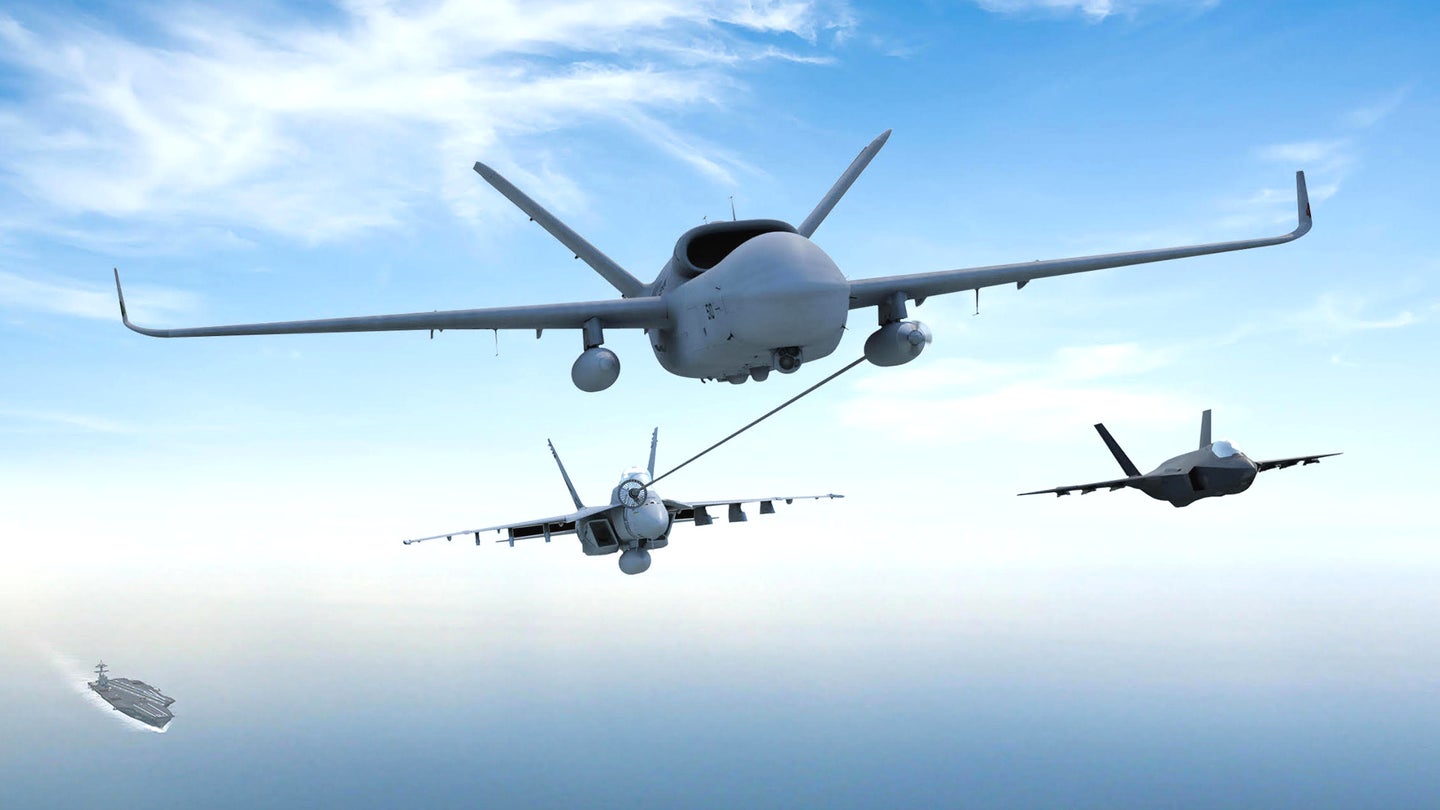 The four companies competing to build the U.S. Navy’s MQ-25 Stingray aircraft carrier-based drone tanker gotten the final request for proposals from the service, though the exact specifics have yet to become public. At the same time, General Atomics has become the first of the firms to show both concept art and models of its complete entry, which the company says will be more than just a flying gas station.

On Oct. 10, 2017, USNI News was the first to learn that Naval Air Systems Command, or NAVAIR, had, without much fanfare, sent out formal requests for the MQ-25 to Boeing, General Atomics, Lockheed Martin, and Northrop Grumman. The Navy said it expected to pick a winning design by September 2018.

Though the UCAS-D effort continued in the background, in 2013, the Navy awarded contracts to the Boeing, General Atomics, Lockheed Martin, and Northrop Grumman for what was initially billed as a stealthy long-range strike and reconnaissance platform able to penetrate through dense integrated air defense networks, dubbed the Unmanned Carrier-Launched Airborne Surveillance and Strike (UCLASS) program. In 2016, the service morphed this project into Carrier-Based Aerial-Refueling System (CBARS) and told the four companies to change course and focus on a air vehicle that would primarily be a aerial refueling tanker, but with a secondary reconnaissance capability.

As time has gone on, even that limited surveillance function has all but gone missing from the Navy’s official pronouncements about the project. The major goal at present revolves around extending the range of the manned components of the carrier air wing and freeing up F/A-18E/F Super Hornets from the burden of having to perform the tanking mission. At present, the service estimates that between 20 and 30 percent of carrier-based Super Hornet sorties are spent on refueling duties.

In an interview in the September 2017 issue of Proceedings, USNI’s official magazine, Vice Admiral Mike Shoemaker, the Commander, Naval Air Forces, said that the final MQ-25 would be able to carry approximately 2,200 gallons, or nearly 15,000 pounds, of fuel out to a distance of 500 miles from a carrier. “The MQ-25 will give us the ability to extend the air wing out probably 300 or 400 miles beyond where we typically go,” he explained.

Before October 2017, none of the companies working on the Stingray had revealed any substantial images of their concepts or a prototype. Two months earlier, a photo had emerged of one of Northrop Grumman’s X-47Bs in a tanker configuration, but it was unclear whether or not this was indicative of the state of their work or some other proof of concept testing. With the firms having tailored their original UCLASS proposals to a completely different mission set, Rob Weiss, head of Lockheed's Skunk Works advanced projects office, told USNI News in March 2017 that he expected all of the competitors to have to significantly rework their designs.

However, General Atomics is now the first company to show off a full concept for the new tanking-focused MQ-25 and their aircraft bears significant similarities to its Sea Avenger concept. The firm’s Stingray design has notably fewer low-observable or stealthy features and a thicker central fuselage. It also appears to have a new, less complex wing design with winglets and less overall sweep, but otherwise it has the same basic configuration with the engine intake on top and a v-tail.

Terry Kraft, a retired U.S. Navy Rear Admiral who is now Vice President of General Atomics Aeronautical Systems, told USNI News that the revised drone has an electro-optical sensor turret under the nose, just like the company’s existing Predators, Reapers, and Avengers, as well as a full retractable landing gear similar in basic arrangement to that of the Navy’s now retired S-3 Viking carrier based anti-submarine warfare aircraft.

Most notably, General Atomics has reportedly added in a system that allows deck crews to direct the drone automatically using standard hand signals. Kraft did not explain how this system worked, but it would undoubtedly involve one or more cameras in the aircraft’s turret or otherwise placed around its fuselage along with a computer brain and specialized software to detect and translate a person’s motions into specific actions.

That the overall design of the General Atomics submission is similar to the carrier-capable Sea Avenger concept isn’t particularly surprising. The earlier proposal was an underappreciated UCLASS contender and had many features that made it relatively easy to to convert from a strike and reconnaissance platform into a tanker.

The Sea Avenger was already likely the cheapest of the UCLASS proposals and the revised Stingray derivative only appears to be a less complex design at base. Thanks to the work on that program and nearly a decade of work on the Avenger, much of the underlying technology is probably fairly mature, too, which would only help drive costs further down. All of the features made Sea Avenger a dark horse contender at the time could combine to turn General Atomics' bid into an easy favorite to become the MQ-25.

The company's concept art only shows a single Cobham buddy store – a known Navy requirement – under one wing and a standard drop tank under the other, but there’s no reason why the new design couldn’t accommodate additional plumbed pylons, just like the Sea Avenger, for even more fuel, making it an even more attractive option. Of course, we have yet to see even a glimpse of the offerings from Boeing and Lockheed Martin.

The wider main fuselage offers immediate space for other mission packages if required in the future. The Navy might already be in the process of realizing it was passing up the possibility to get a much more significant capability out of the MQ-25 by focusing almost exclusively on tanking.

“You can see a future for weaponization, you could see a future for ISR [intelligence, surveillance, and reconnaissance] capability,” General Atomics’ Kraft noted to USNI News. “The Navy has already asked us to put hooks in there for a radar and I think it’s very logical that the first spiral would be some type of radar installation.”

The U.S. Navy is also buying Northrop Grumman’s MQ-4C Triton drone, a derivative of the RQ-4 Global Hawk, for long-range maritime surveillance, but it is far too large and fragile to operate effectively from a carrier’s deck. The addition of a search radar capable of detecting targets in the air or at sea would be a relatively easy and sensible addition to the Stingray that could expand the sensor capabilities of the carrier battle group as a whole. An off the shelf passive electronic intelligence suite seems like another highly logical addition, as would installing a powerful network node akin to the U.S. Air Force's Battlefield Airborne Communications Node to help relay information between various platforms.

At present, the carrier air wing’s small number of E-2D Hawkeyes performs the long-range radar functions. The Navy is heavily invested in expanding the interconnected nature of it ships and aircraft as part of the overarching Naval Integrated Fire Control-Counter Air (NIFC-CA) network, which includes the Cooperative Engagement Capability net the video above outlines in more detail. This setup uses various data links to share information between various platforms, extending the range at which they can spot and engage enemy targets.

In theory this means that a destroyer could fire a surface-to-air or surface-to-surface missile at a target beyond the range of its own sensors based on information from another ship or aircraft. An MQ-25 with a radar, even in a detachable pod, would add another valuable node to this network. The Navy is also buying increasingly advanced weapons, such as Lockheed Martin’s stealthy Long Range Anti-Ship Missile (LRASM), that can act autonomously based both on data from off board sensors and its own systems.

All of this continues to beg the question of why the Navy has been so laser-focused on the tanking requirement for the MQ-25 in recent months. There area readily available off-the-shelf intelligence and networking components that it would not take much effort for any of the Stingray competitors to integrate into their final designs.

“At the end of the day, the UAV [unmanned aerial vehicle] is a truck,” Kraft said himself to USNI. He’s not wrong and we will be watching intently to see what the Navy ultimately decides to load onto the Stingray.