The carrier's long delayed deep refit and modernization program has had its budget slashed in half putting in question the carrier's future relevance. 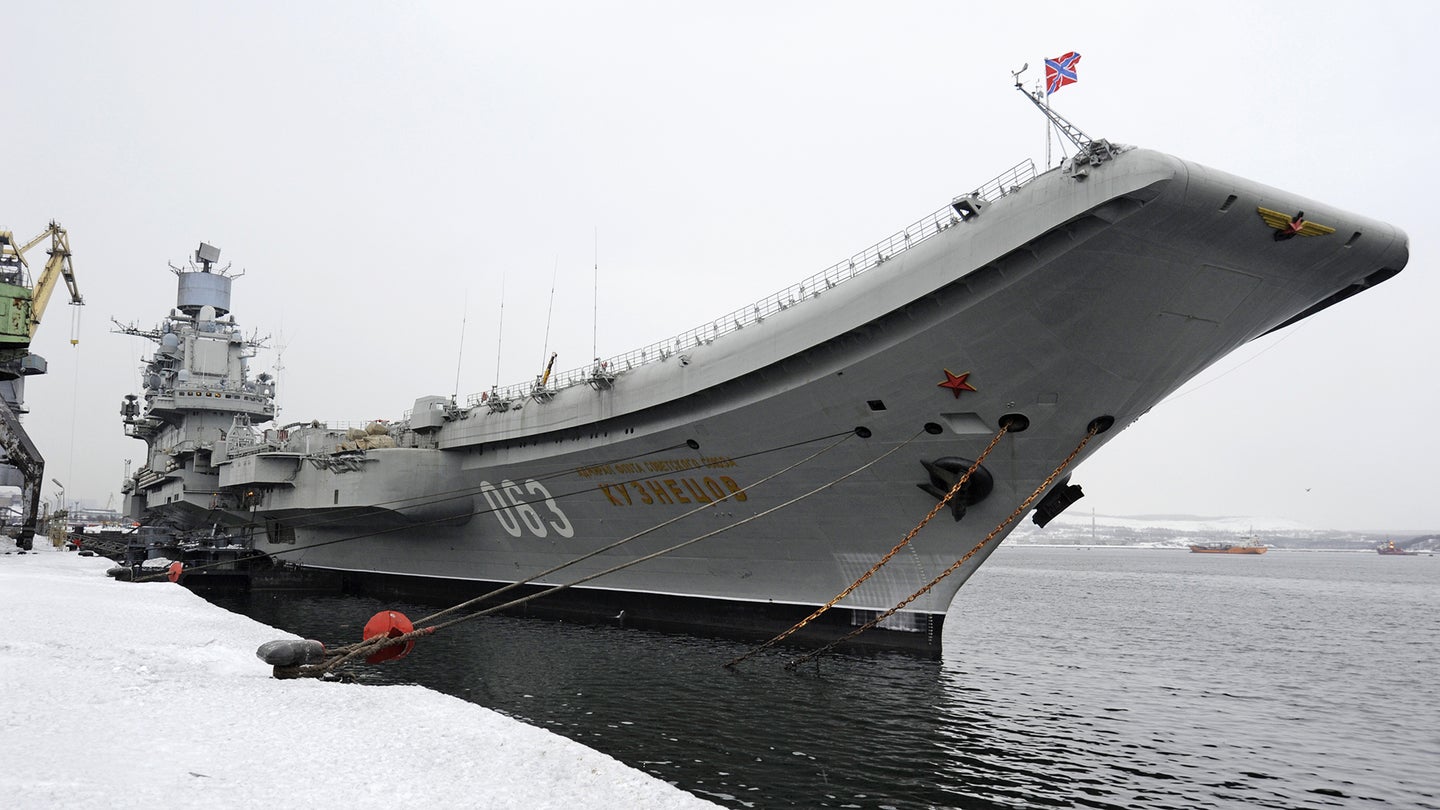 Russia's sole fixed-wing aircraft carrier, the Admiral Kuznetsov, returned from Syria late last winter to finally begin a long and supposedly deep refit and modernization that would allow it to serve for years to come. The carrier's overhaul, which had been put off time and time again over the last decade, is said to cost over $800M, and will take nearly half a decade to accomplish. But just as we at The War Zone had concerns about, it seems that Moscow is now significantly reducing the scope of work for the refit due to fiscal considerations, with only about half the funding needed for the original plan being provided.

Interfax Russia first reported on the reduction in investment in the carrier, with their source stating:

"Instead of previously planned approximately $50B rubles for the work, it is planned to allocate about half of the previously announced amount."

The reduction will surely impact the initiative to update the ship's mission-related technology, including its radars, communications, defensive systems and so on, with the roughly $400M still allotted for the refit likely being used to repair the ship's propulsion systems and other critical infrastructure.

This triaging of resources makes sense as the Admiral Kuznetsov is famous for its poor reliably—an oceangoing tug follows it everywhere it goes—as well as its run-down living conditions and mission hardware. In particular, the ship's boilers are known to be in especially poor condition. And although wide-eye concepts like a supposed future Russian supercarrier design have made their rounds, such projects are all but impossible for Russia to achieve, both fiscally speaking and in terms of shipbuilding capabilities. The fact that Moscow can't even update its only existing carrier, even after years of deferring such an initiative, underlines this stark economic reality.

We have talked before about how Russia's military hardware dreams far outstrip economic truth, with multiple largely hyped programs being sidelined in recent months due to lack of funds required to realize them.

Although repairing the ship's propulsion system is a given even on a reduced budget, along with repairing other critical mechanical components, it isn't clear how much actual modernization can be had for less than the cost of a single Littoral Combat Ship. Without major upgrades to the ship's combat systems, its ability to fight and survive in anything but low threat, permissive environments will be put in question. On the upside, a drastically reduced scope of work could allow Russia Navy's tiny fixed-wing carrier-capable tactical jet fleet to return to the ship sooner than originally planned.

The readiness of Russian Navy fighter pilots has been questioned, especially following the loss of two aircraft, a MiG-29KR and a Su-33, during the carrier's last cruise where it took part in operations in Syria. With only one troublesome carrier that is just sporadically available for training, and years passing during the ship's time in port and dry dock for maintenance, not only do shipboard flying skills atrophy but the expertise needed to teach new pilots the art of carrier aviation also dwindles. This "brain drain" is especially concerning as the Kuznetsov's air wing won't get to practice aboard the ship for multiple years as it receives much needed attention.

Maybe the most frustrating part of all this for proponents of Russian carrier-borne naval aviation is other rising navies—China and India—have taken Russian carrier designs and modernized them into credible weapons of war, and China is now producing its own brand new carriers based on the Kuznetsov class design. But this has come at a substantial cost. China took a rusted Kuznetsov class hulk and turned it into a modernized carrier and then reverse engineered it and put the modified indigenous class into production—not a cheap affair to say the least.

India bought their carrier, the INSVikramaditya from Russia, which is a converted Kiev class aircraft carrying cruiser that was updated into a Kuznetsov class design by Russia as part of a deal that went way over budget and far beyond its intended timeline. The project cost a whopping $2.3B, which once again prompts the question of what Russia is going to get with its truncated $400M budget to update the Kuznetsov.

Even a more reliable Admiral Kuznetsov has limited utility without being modernized with the systems required for it to actually go to war against a foe with a naval capability that can shoot back. With all this in mind, the question is would Russia's Navy be far better off investing its dollars in other areas, such as in bolstering its submarine or surface combatant force?

Russia's Ministry of Defense may be in the process of answering this very question, especially after the somewhat embarrassing showing of the Kuznetsov's air wing during last year's cruise to the Eastern Mediterranean. Maybe this drastic reduction in funding for the vessel is a sign that further reductions could be on the horizon. If India doesn't choose to buy more navalized MiG-29 derivatives—an aircraft it has had chronic issues with over the last seven years—for its future aircraft carrier, one of the most relevant reasons for keeping the Kuznetsov around—that being testing and marketing for export aircraft sales—may be eliminated as well. And all this comes as Russia claims that it is developing yet another carrier-borne fighter even though the "newish" jet it already has—the MiG-29KR—has only gone on a single cruise with just four airframes embarked.

Maybe the Kuznetsov's most important mission at this point is the apparent sense of pride it gives Russia just having it around. Tactically speaking, the ship and its air wing have done nothing land based assets couldn't do. Strategically, at least in an abstract sense, it's a different story, but keeping such a costly ship and its air wing around just to say "we have a carrier too" seems like a very poor use of limited military dollars.

If Moscow decides to finally call it quits with Kuznetsov, it will probably go up on the auction block. And speculating just who would purchase the vessel and possibly its air wing is an entirely different story altogether.

If the report proves accurate, we will have to wait and see exactly how the Kuznetsov's future pans out.