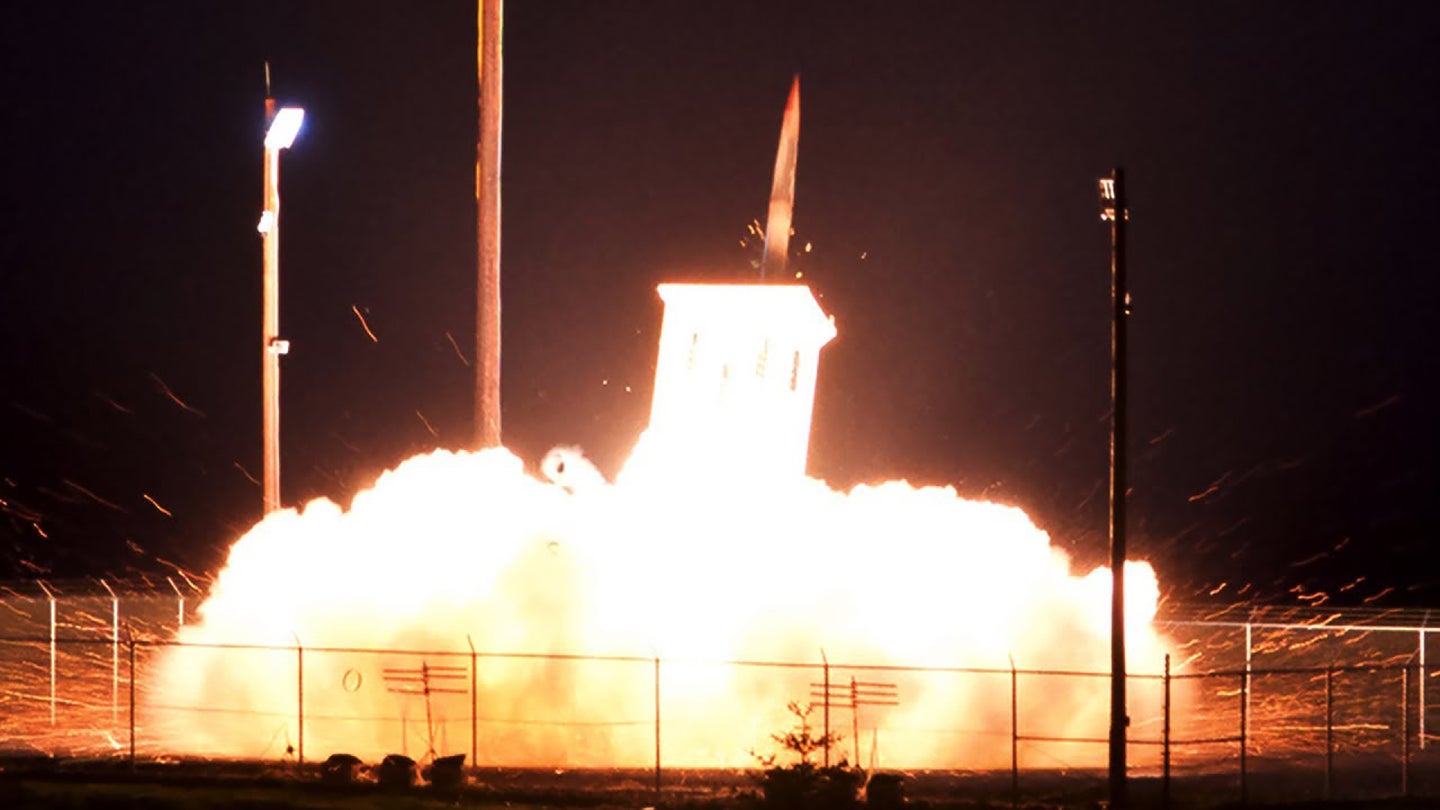 At nearly the same time as the news hit that Saudi Arabia would be purchasing an unknown number of S-400 air defense batteries from Russia, the Defense Security Cooperation Agency put out a release detailing The Kingdom's big purchase of the Terminal High Altitude Area Defense anti-ballistic missile system. And the word big is really a vast understatement.

The deal has grown from roughly $13.5B the last time we reported on it in June to over $15B. It includes a whopping 44 launchers, 360 interceptors, 16 fire control and communications stations, and no less than seven AN/TPY-2 radars. Training, support, tools, facilities construction, and even 43 "Prime Mover" transporter trucks are included in the wide spanning, so called "end-to-end" weapons deal.

The Defense Security Cooperation Agency statement puts the sale in context in its own "unique" way, stating:

"This proposed sale will support the foreign policy and national security objectives of the United States by improving the security of a friendly country. This sale furthers U.S. national security and foreign policy interests, and supports the long-term security of Saudi Arabia and the Gulf region in the face of Iranian and other regional threats. This potential sale will substantially increase Saudi Arabia’s capability to defend itself against the growing ballistic missile threat in the region. THAAD’s exo-atmospheric, hit-to-kill capability will add an upper-tier to Saudi Arabia’s layered missile defense architecture and will support modernization of the Royal Saudi Air Defense Force (RSADF). Saudi Arabia will have no difficulty absorbing this equipment into its armed forces.

The proposed sale of this equipment and support will not alter the basic military balance in the region."

That last statement is almost laughable, as selling what is the densest anti-ballistic missile shield in the world, minus Israel's, certainly does alter the military balance in the region, although in a way that could favors the U.S. depending on how your view such a weapons deal. Such a large network of THAAD systems is clearly aimed at neutering Iran's ability to rain short and medium range ballistic missiles down on Saudi Arabia during a time of conflict. It also hedges against the potential of growing advancements in ballistic missile capabilities out of Iranian-backed Houthi rebel controlled areas of Yemen.

What's interesting is that Israel has been silent in regards to this order—yet another sign of the major geopolitical metamorphosis in the region where old enemy Arab states are now becoming unlikely strategic partners with Israel—a phenomenon spurred primarily by the Iranian threat.

Considering Israel's primary nuclear deterrent in delivered by Jericho ballistic missile—with the IAF's tactical jets still being another possible delivery platform as well as the Israeli Navy's Dolphin class submarines for second-strike capability—the fact that the most powerful Arab state is purchasing a high-end missile shield from the U.S. would likely be very unnerving development in the past. And although those radars and missiles will be pointed east and south, they could be redeployed to face in the opposite direction. But clearly such concerns are no longer of great importance for Israel.

The acquisition of seven AN/TPY-2 radars points to a Saudi goal to build a line of early warning and fire control radars that will provide overlapping coverage over the country's vulnerable eastern and southern flanks. In comparison, a single AN/TPY-2 provides coverage for all of South Korea. With the radar placed on a golf course located deep in the southern portion of country, it furnishes detection and engagement capability for most short to intermediate range ballistic missiles emanating from North Korean territory. Part of the reason North Korea is pressing to field a submarine-launched ballistic missile capability is to be able to launch on South Korea from outside the AN/TPY-2's coverage area.

Based on similar spacing as seen in South Korea, seven radars would provide a chain of coverage starting with a radar facing north over Basra and into Northwestern Iran, followed by multiple units facing the Persian Gulf, and then picking up again to cover The Kingdom's southern borders with Yemen, with possibly a spare radar for planned servicing and/or offering double layer coverage for Riyadh from a single threat direction. Like in South Korea, radars would be set back significantly from Saudi borders to provide overlapping coverage and to help protect the radars themselves from being destroyed during a conflict.

It's one audacious and phenomenally expensive plan.

It is also more probable than just possible that the U.S. will benefit from the surveillance information these radars collect. And likewise, the Saudis will likely benefit from information gathered by America's elaborate space-based infrared early warning system which can detect the launch of ballistic missiles before they climb high enough over the horizon so that radars hundreds of miles away can begin tracking them.

This may sound like a sweet deal for the U.S., not only does it get to sell $15B worth of hardware and support to the Saudis but it also helps neuter the threat posed by Iranian ballistic missiles. But some would argue such an elaborate defensive system would make going to war with Iran a more palatable proposition, and its existence will only push Iran to build more missiles so that they can overwhelm Saudi Arabia's defenses.

The system will likely be tied with Saudi's Patriot missile batteries, with the PAC-3 Patriot being capable of shooting down shorter-range ballistic missiles during their terminal phase as well, and into the Saudi Arabia's greater integrated air defense system (IADS) network. It's unclear how the possible acquisition of an unknown number of S-400 air defense batteries will fit into this larger scheme as the Russian system is not compatible with the Patriot or the THAAD.

Another question that is yet to be answered is if the UAE, a close ally of Saudi Arabia, which also possesses a much smaller THAAD installation, will be linked into the Saudi's much larger system.

We'll keep you updated as the landmark missile defense deal progresses and it's likely to become more of a major news story if hostilities with Iran drastically increase if the Trump Administration chooses not to re-certify the Iranian nuclear deal. Iran's growing ballistic missile capabilities have been among the largest sticking points the White House has with Iran and their supposed choice not to live up to the "spirit of the agreement." Iran just today threatened to attack U.S. bases in the region with ballistic missiles if it pulls out of the agreement.