Northrop Grumman seems to have gone "back to the future" with their next generation stealth bomber design, and that's actually really exciting. 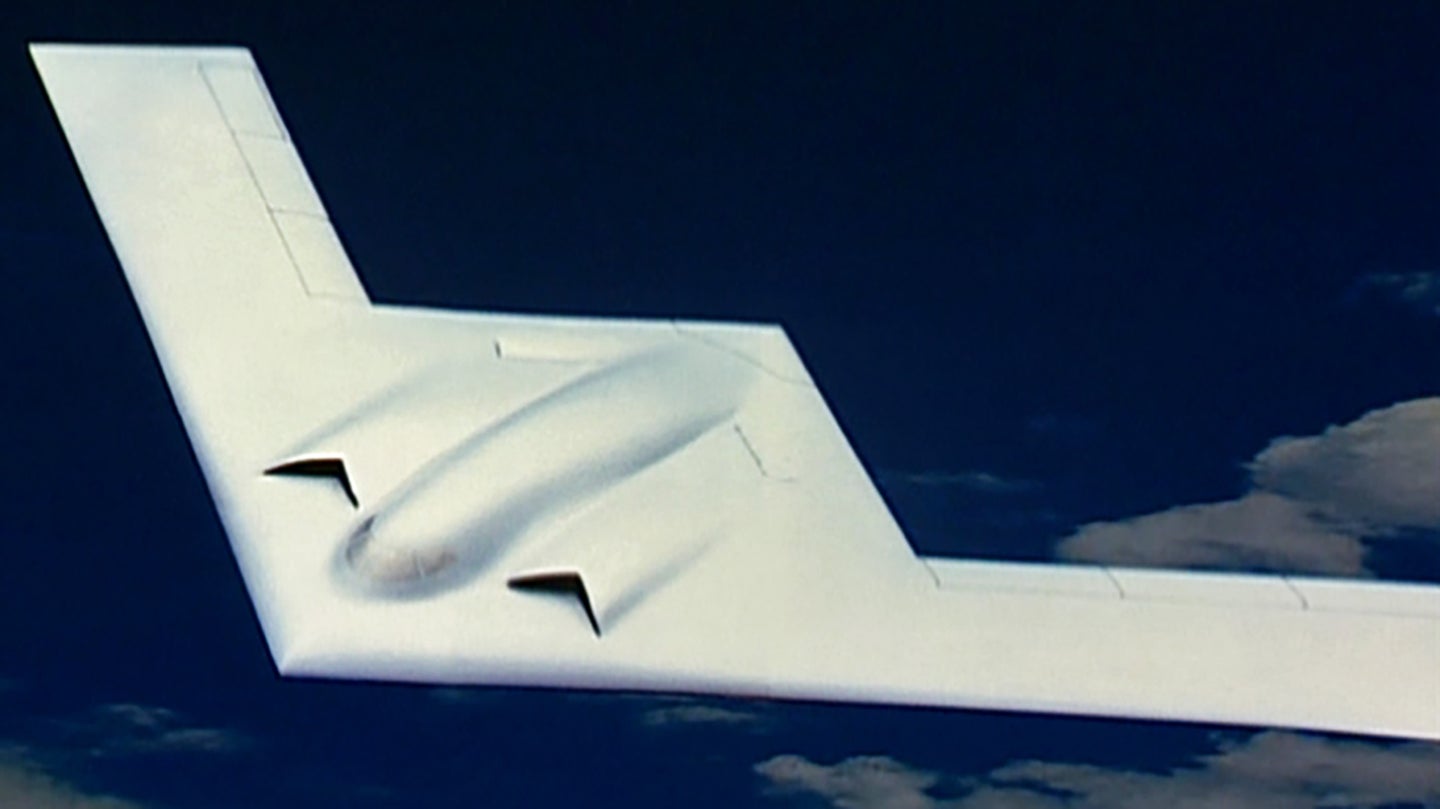 Detailed information on the B-21 Raider is still scarce to say the least, but for over a year and a half we have had a rendering supposedly depicting the multi-role strategic stealth platform's basic shape and features. Recently, other simple planform renderings have trickled out from the marketing department of the stealth bomber's manufacturer, Northrop Grumman. Although there can be no doubt that the aircraft will feature a whole slew of cutting edge technologies, will be constructed using the latest manufacturing techniques, and will be covered in the most advanced radar absorbent coatings, the general configuration of the aircraft doesn't seem to be new at all, in fact it appears to date back over three decades to the dawn of the stealth bomber revolution.

At first glance the B-21 looks very much like the Northrop's B-2 Spirit, and that's for good reason. It seems that the Northrop team got the B-2's design amazingly right over thirty years ago, and they would have gotten it even closer to the B-21's design if the USAF hadn't thrown the demand for low-altitude penetration capability onto the program—then called the Advanced Technology Bomber—when it was so far along in its design process.

The same planform design of the B-21 was seen in this marketing banner from the Air Force Association's annual conference in September of 2017:

The call to add low-level flying capability came out of fears that Russia would field increasingly more advanced radars that would neutralize the B-2's low observable attributes. As such, being able to sneak in below radar via flying nap of the earth flight profiles like its B-52 and B-1 brethren became a requirement for what was a high-flying strategic bomber that relied primarily on its stealthy design and careful mission planning for survival.

Not only did this useless addition make the B-2 less stealthy from certain aspects and against certain radar bandwidths (most notably from behind against longer wavelengths), but it also added weight and dropped the aircraft's altitude ceiling substantially, from roughly 60,000 feet to under 50,000 feet. The change also impacted the design's range and most of all it added substantially to the cost and complexity of the already very high-end and expensive aircraft.

So Northrop's Advanced Technology Bomber design that would eventually become the B-2, named "Senior Ice" during its development, didn't originally have its trademark sawtooth trailing edge, instead it had a large wedge shaped empennage just like the B-21 Raider. The sawtooth feature only came about as a result of the USAF's aforementioned late change in requirements that demanded the ATB have low-level penetration capabilities.

All this was taking place in the mid 1980s, at the height of the Reagan era defense spending boom and at a time when the Soviet Union's war machine was still a very real threat. But just half a decade later, the production cost of the B-2, which had ballooned due in part to dwindling production numbers funded by congress as a result of the fall of Soviet Union, would cause the program to enter a procurement "death spiral," with production ending after just 21 units were built.

You can read all about the ATB program and Lockheed's competing aircraft to Northrop in this past feature of mine.

Today the B-2 remains a "silver bullet" weapon system—truly a low-density, high demand asset and an American treasure—that has proven its worth time and time again, including most recently in Libya for the second time. The tiny fleet continues to get upgrades that will allow it to remain relevant into the second half of the 21st Century.

No exhausts are shown on the B-21 rendering, and it is very unlikely they are located within the jet's trailing edge or especially below the aircraft where the jet is most vulnerable to detection by infrared search and track systems. But that's not really that strange because the first public B-2 renderings didn't show an exhaust system either as it was one of the aircraft's most sensitive features and remains so till this very day (if you are shooting B-2s on a USAF base, shots from the rear remain prohibited).

It is abundantly clear (see above) that the USAF and Northrop Grumman looked back to the late 1980s to see how they handled early disclosure of the B-2's design when coming up with a rendering of the B-21.

Beyond telling us that Northrop got the stealth bomber design uncannily right some 30 years ago, even when computing power was just a fraction of today, the B-21's similar design to the earlier Senior Ice derivatives tells us some really interesting things about the new bomber's potential capabilities.

The fact that the B-21's planform is extremely similar to the High Altitude Penetrator Senior Ice concept tells us that the B-21 will be a high-flying and extremely aerodynamically efficient weapons and sensor platform, and this is very important. If Northrop's original ATB design had a targeted operational altitude of 60,000 feet than it is very likely that the B-21 will meet the same high flying goal. This makes a lot of sense because the aircraft will be able to achieve its range goals on less fuel and thrust than otherwise, and most importantly, being able to fly up in RQ-4 Global Hawk flight envelope territory means the B-21 can put its sensor suite to work over long ranges, taking advantage of its extreme line of sight.

It also means the B-21 will be able to loiter above the tactical aircraft air combat environment below. As such it could act as a communications and data link connectivity node, sucking up information from the F-35's, F-22's, and one unmanned combat air vehicle's proprietary and stealthy data links. It can then connect these aircraft below by rebroadcasting updates of a "fused" common battlefield picture on each of their individual waveforms.

This concept, which has been cryptically touted in multiple organizational concept charts in recent years, solves a number of problems and fits in with two high priority USAF initiatives. Those include focusing on networks and information sharing, as well as morphing from a platform-centric fires and intelligence gathering strategy to a  "distributed" one.

It also means, like the high-flying F-22 Raptor, that many of the B-21s weapons, which will include everything from JDAMs, to Massive Ordnance Penetrators, to ultra long-range air-to-air missiles, will benefit from the Raider's high perch. Even potentially lasers in the future will have more range due to this performance attribute. This equals farther standoff attack capability and as a result enhanced survivability, as well as increased weapons range for offensive attacks.

The bottom line is that the B-21, which is really a stealth multi-role platform of sorts, not "just" a bomber in the traditional sense, will be able to be more effective across a wide range of missions by operating at higher altitudes. It also means the aircraft will cost less to construct as it will require less cumbersome structures and less powerful engines, and even reduced fuel carrying capabilities, to accomplish its mission.

This is also likely a major factor in Northrop Grumman's ability to keep the cost down even under heavy USAF scrutiny. Additionally, the use of this planform design is clearly a contributing factor as to how Northrop Grumman can claim substantial wide band low observability. Generally speaking, the larger a stealthy aircraft's structures are, and the minimization of them all together (horizontal and vertical tails, discreet wings, nose structures and so on) the better it will be able to blend in with background radiation when even being painted by lower frequency radars.

This high-flying requirement is also likely a contributing factor as to why Northrop Grumman didn't put forward their signature "cranked kite" design concept for the B-21 tender—similar to that used on the X-47B demonstrators. The company produced multiple renderings over the years of that planform being applied to their earlier Next Generation Bomber designs. But once the LRS-B program was underway this seems to have changed.

We have talked multiple times about Northrop Grumman's all but officially disclosed RQ-180 high altitude long endurance (HALE), very stealthy unmanned aircraft. This aircraft very likely influenced not only Northrop Grumman's design but also the USAF requirements for the B-21. In the late 2000s there was a massive shift in course by the Department of Defense under Secretary Of Defense Robert Gates when it came to developing a new bomber.

It is heavily implied that the RQ-180 and possibly a next generation bomber technology demonstrator proved that such a program, which had stumbled for nearly a decade, was well worth pursuing. This same aircraft, which are likely highly limited in numbers, could also serve as a companion to the B-21 in a similar manner as how the E-11 and EQ-4 BACN platforms perform the networking gateway mission, and the U-2S Dragon Lady and RQ-4B perform similar surveillance missions.

We also know that the Long Range Strike Bomber requirements that followed this change specified a lighter aircraft with less payload than the B-2—also indicative of trying to reach a high-altitude capability at an affordable price. In fact, even Boeing's renderings of their LRS-B concept featured a very similar design as the B-21 and the earlier Senior Ice configuration.

With all fingers pointing to the high probability that Northrop Grumman went "back to the future" with their B-21 Raider design, we are reminded that this aircraft will be like no other in terms of its intended capabilities, with the B-2 being an inaccurate analog for direct comparison purposes. It will do much more in terms of missions than its predecessor, and will prowl the skies more deeply into the stratosphere. Maybe most exciting of all is that after 30 years of experience with the world's first stealth bomber, Northrop Grumman's B-21 will in many ways be the bomber that should have been, and so much more.

The stealth jet is rumored to be under construction now at the company's Plant 42 facility in Palmdale, CA.