It has been a rough year for the T-45 community, and today's tragic news sure doesn't help. 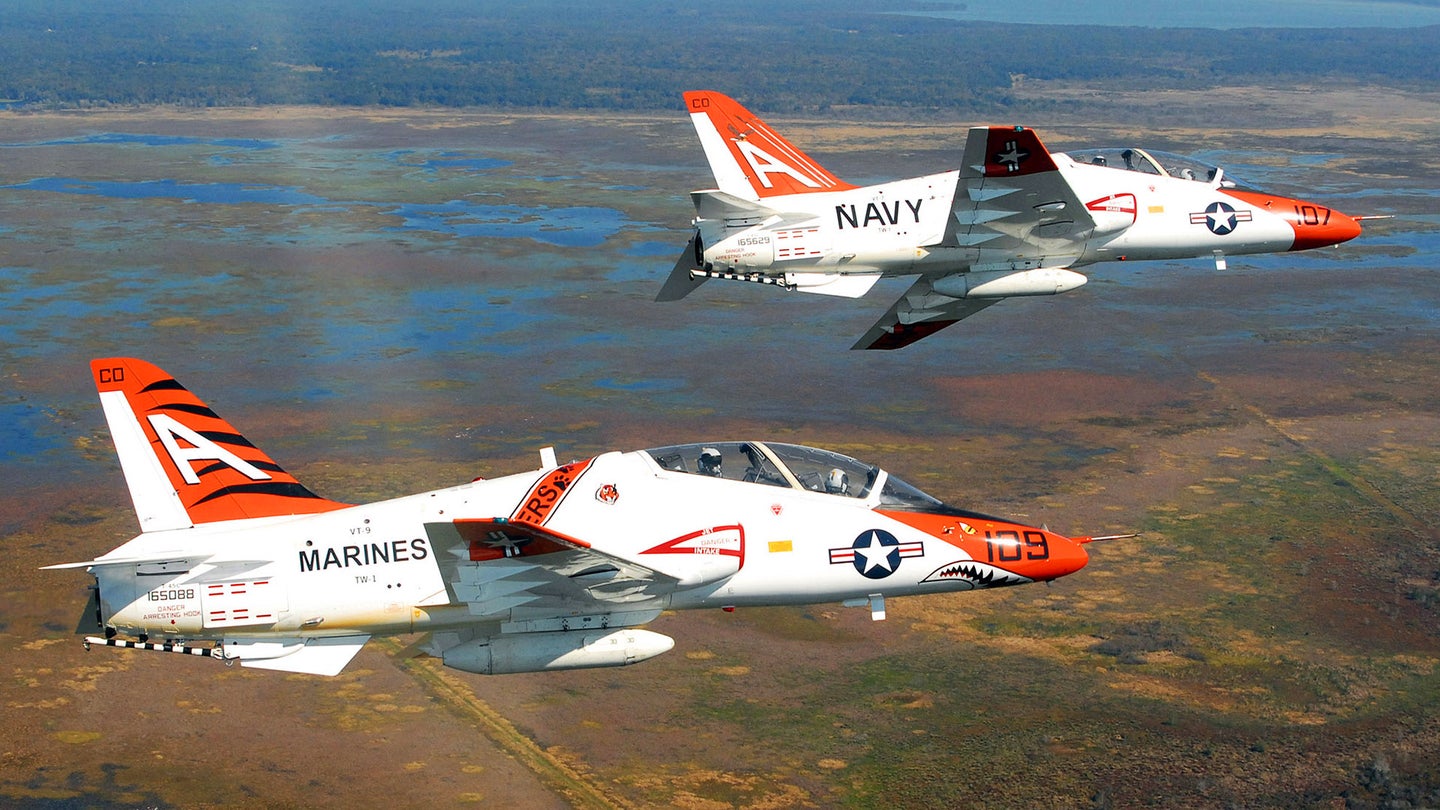 At around 6pm, near Tellico Plains and the Cherokee National Forest in Tennessee, roughly 50 miles southwest of Knoxville, a T-45C Goshawk trainer belonging to Navy Training Squadron Seven (VT-7) "Eagles" crashed. Both the instructor and student onboard died in the mishap. The jet was based out of NAS Meridian, located in Mississippi.

The Snowbird Military Operating Area is in the vicinity of the crash site and a number of military low-level training routes wind their way through the nearby mountains. It isn't clear exactly what the flight profile of the Goshawk was at the time of crash. The debris field where the jet impacted the ground is said to be somewhere around a mile long. The squadron has executed an operational pause following the loss of their squadron mates and it's not clear exactly when they will begin flight operations once again.

The terrible news comes just over a month after the Navy's T-45 community had the heavy flight restrictions placed on it, which included not being able to fly over 5,000 feet, largely removed. They were put in place as the result of a spate of reports from pilots describing physiological events in the cockpit, namely the sudden inability to breathe clean oxygen and resulting cases of hypoxia like symptoms. Similar problems have been experienced in F/A-18 Hornets and the USAF's F-35A Joint Strike Fighters. Both services have struggled with finding the exact cause of the potentially deadly issues.

The grounding lasted from April to August when the jets were finally allowed to fly over a much wider range of their flight envelopes, allowing student pilots to start their flying syllabi once again. The tight flight restrictions meant that instructors were mainly the ones allowed to fly the Goshawks over the last five months, and that was just to keep up some form of currency in the jet.

As part of getting back into the air for training, a digital oxygen monitoring and alert system known as the CRU-123 is being fitted to T-45s. As of the middle of September, 111 of 170 T-45s in the force had been equipped with the new system. Not only does it provide a measurement of oxygen being supplied to a pilot, but it can also record all the environmental data it collects so that it can be downloaded after each sortie. This information can be especially useful in better diagnosing the T-45's chronic environmental issues over time.

A water separation system that is present on many other tactical jet onboard oxygen generation systems (OBOGS) is also going to be installed on the T-45 as a preventive measure.

"The navy’s review team discovered T-45's OBOGS does not have a water separator mechanism, even though the service fields a similar mechanism on OBOGS in high performance jets, Moran says. When water interacts with contaminants in the OBOGS, it can release the contaminants into the aircrew breathing air. The navy will install water separators on T-45s by this fall..

In parallel with ongoing mitigation efforts, industry will install breathing air pressure warning for aircraft fitted with the solid state oxygen monitor (CRU-123) this month and develop a next-generation OBOGS known as GGU-25."

But still, as of a couple weeks ago four separate physiological events were reported by T-45 pilots during which the oxygen monitoring equipment all read normal levels, which puts the cause of this deadly crash into even greater question.

The T-45C is absolutely critical to the Navy's production of fleet pilots. It remains the only jet trainer in the inventory that can operate from an aircraft carrier.