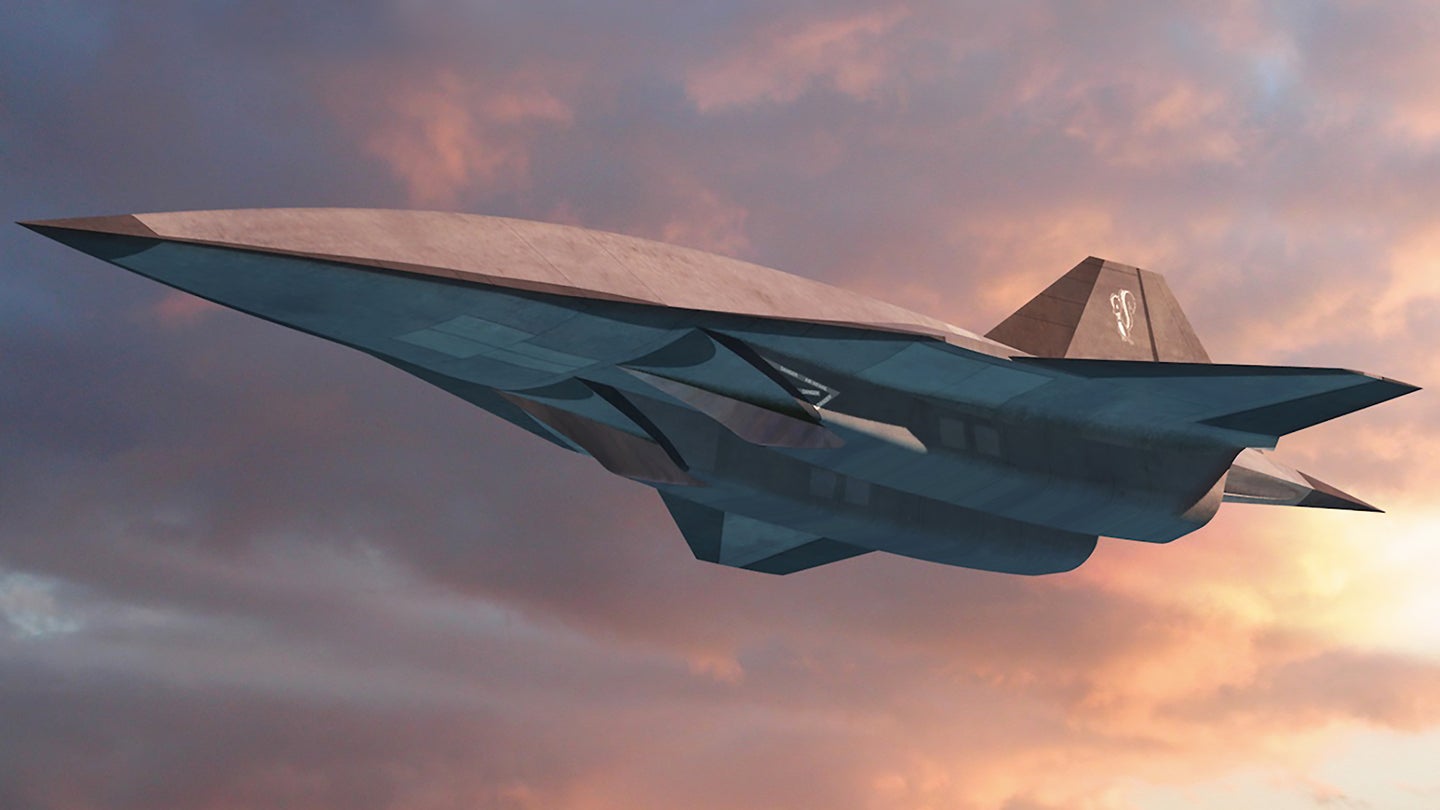 Aviation Week posted an online article last week that pointed once again to the possibility of accelerated development of a Lockheed Skunk Works designed hypersonic aircraft, now widely known as the SR-72. But the report not only talked about industry buzz and hints from Lockheed that the program may be more mature than originally thought, it also conveyed a sighting account of a demonstrator aircraft.

Last June I wrote an article about just this topic, titled What's The Deal With Lockheed's Gabbing About The Secretive Hypersonic SR-72? In it I concluded that the string of strange statements and outright hype about the supposedly top secret program that had trickled out from Lockheed to a lone source at Aviation Week seemed peculiar enough to conclude that the so called SR-72 was likely much farther along in its development than what was being insinuated:

"All things considered, we are, and have been hearing a tremendous amount of information about what is clearly a highly classified program, coming from the contractor directly no less. This is highly peculiar. And parts of this technology have been in the works for decades. The "combined cycle" propulsion system capable of taking an aircraft from sitting on the runway well through mach five has been in development since at least the mid 2000s by Lockheed and its partner on the project Aerojet Rocketdyne. Additionally, past hypersonic vehicle tests by the USAF have also garnered valuable insights into this extreme flight environment, and there are likely many other major breakthroughs gained over the years from programs we know nothing about.

I would posit that it is very possible the Skunk Works and its USAF partners are actually farther along in the SR-72's development than they let on. Possibly even past the point of a small demonstrator, and already fielding a full-size prototype, or even an operational capability. In other words, what we may be hearing about are post-dated echoes of the program's past. The only other reason as to why Lockheed would be so willing to blabber about their hypersonic flying unicorn is that they need money from Uncle Sam to fund it. But that seems unlikely as it is highly doubtful the company has funded the concept's development for over a decade on its own, beyond a relatively small amount of money granted by NASA to explore the technology. In fact, Weiss says that Lockheed is not alone on the project in any way in his latest statement, noting that "DARPA and the services" are directly involved."

...Considering how competent Lockheed and their Air Force colleagues are at keeping secrets, the SR-72's strange "gray world" existence makes little sense. And hey, something has to live in that huge new remote hangar at Area 51 right? Maybe that facility's tenant is the aircraft being described still as a "paper concept" here today.

In the end, I would suggest being open to taking SR-72 related news as more of an indication of what is, instead of what could be."

Months later, Aviation Week seems to be pushing a similar narrative outright, and not only that, they even published the description of a supposed sighting of a hypersonic demonstrator with remarkably few caveats, with the latest Aviation Week article stating:

"Lockheed Martin is ramping up development of hypersonic system technology as observers report the first sightings of a demonstrator vehicle believed to be linked to the Skunk Works’ planned SR-72 high-speed aircraft project...

...According to information provided to Aviation Week, one such technology demonstrator, believed to be an unmanned subscale aircraft, was observed flying into the U.S. Air Force’s Plant 42 at Palmdale, where Skunk Works is headquartered. The vehicle, which was noted landing in the early hours at an unspecified date in late July, was seen with two T-38 escorts. Lockheed Martin declined to comment directly on the sighting."

We have no clue where, or more accurately who Aviation Week got this report from but it has spread through the aviation and defense communities like wildfire. The problem with publishing something like this without the author providing further context is that it is taken by many as fact, which it is not.

The sighting itself, as described, has its own issues. First off, we have no index regarding the quality of the source. Second, if they did indeed see a clandestine aircraft, how would they even know what they were looking at and be able to decipher the aircraft's specific mission or affiliated program?

We don't know the exact design configuration of a hypersonic demonstrator even if it exists. All we have been told by Lockheed is that it would be approximately the size of an F-22. But even that could have changed. Additionally, as noted by the article, this sighting didn't occur during daylight hours, so how did the viewer even make out enough details on the aircraft to be able to make a guess as to its origins one way or another?

Then there is the question of who the aircraft even belonged to if the sighting of something previously undisclosed did indeed occur. Boeing, Northrop Grumman, and Lockheed all have massive compounds at Plant 42. The airfield is huge. Even seeing where an aircraft taxis to from an approach end of one of its runways is questionable, especially for a clandestine test article flying in low light conditions.

Even the T-38 element of the story seems a little odd. Chase is usually provided by F-16s these days, although Boeing owns T-38 chase aircraft as does NASA—both of which have a large presence at Plant 42. Edwards AFB to the north of Palmdale also has T-38s assigned, although once again, they aren't used for chase duties of high performance aircraft like the F-16s are.

Once again, the quality of the source is key here. If it was a bystander/layman the whole thing is highly speculative as normal people misidentify familiar aircraft in broad daylight, let alone in the dark. Although it would be a much more reliable source, it is doubtful that is was someone from inside Plant 42's fence line, as blabbering about this kind of thing is not conducive to employment for most jobs there. That doesn't mean it's impossible, just not probable.

If the sighting is true, and some exotic test aircraft did fly back to Plant 42 instead of being shipped there as is known to be common, it could have belonged to Boeing or Northrop Grumman, not just Lockheed Martin. And above all else, how is it certain that what the person saw was indeed a high-speed demonstrator instead of one of a whole slew of rumored black programs or ones that otherwise remain totally unknown?

Also, it is worth noting, that there have been no other major sightings of such an aircraft in recent months, at least any that are rumored to have occurred and discussed within the communities of people who have high-interest in this type of thing—something we here at The War Zone monitor very closely. So this sighting appears to be unique if it is truly accurate.

None of this is to say that a hypersonic technology demonstrator isn't flying, or hasn't been for some time. Once again, we surmised as such months ago. It's just this sighting account was conveyed with such little detail that its validity is highly questionable. As we have discussed in the past, by most indications there are a whole slew clandestine flight test programs underway at any given time, and if the account is to be believed, any one of these could have been the aircraft in question. We don't even have a description of the aircraft spotted.

But there can be no doubt that the Pentagon is becoming highly concerned with America's "hypersonic gap" as its peer state competitors forge ahead quickly with the game-changing technology. So far it seems that America's potential foes have concentrated on the development of hypersonic cruise missile technology. With the USAF feeling behind the curve, a hypersonic platform, a reusable aircraft capable of launching its own weapons and carrying reconfigurable sensors, is likely a prime developmental target that can close that gap and reach a position of superiority in the hypersonic realm in one fell swoop.

So as we said months ago, could there be a hypersonic demonstrator aircraft our there? Yes. In fact it seems more probable than possible, and this aircraft could have existed in the past, not the present. But is the supposed sighting at Plant 42 as reported by Aviation Week further evidence of its existence? Without more details, no it is not.