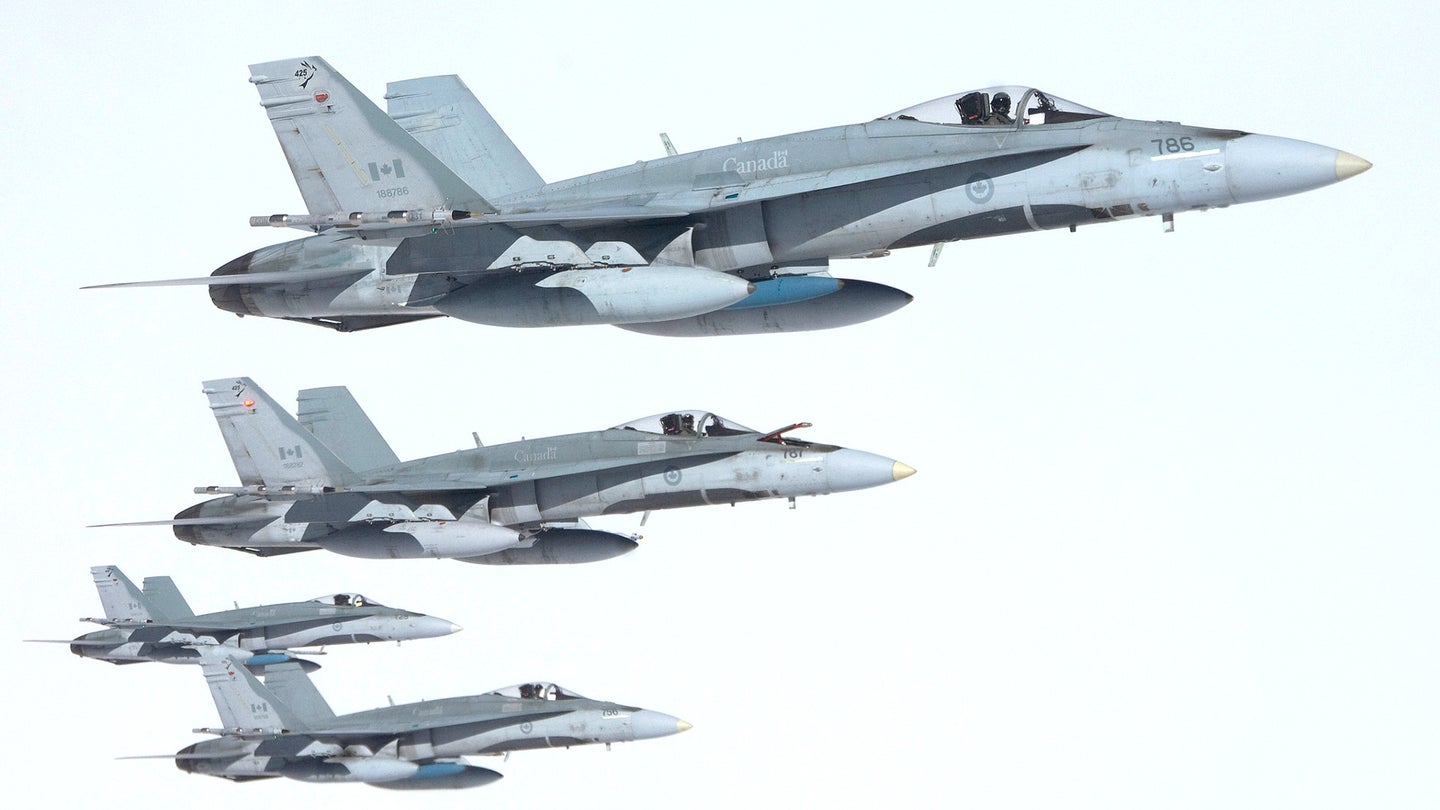 As Canada continues to struggle with what to do about its participation in the F-35 Joint Strike Fighter program, attempts to buy interim replacements for its aging CF-18A+ Hornets have turned into a saga of their own. The country's military is desperately scrounging around for places like Kuwait and Australia for second-hand fighter jets to bolster their existing fleet in the wake of a rhetorically charged trade dispute between Canadian firm Bombardier and Super Hornet maker Boeing.

On Sept. 28, 2017, Canadian Defense Minster Harjit Sajjan revealed that Canada had and might still be considering buying second-hand F/A-18C/D Hornets from Kuwait. Unfortunately, there were serious concerns about whether the two countries could finalize a deal before the Royal Canadian Air Force’s (RCAF) approximately 65 active CF-18A+s, also known as the CF-188, reached the end of their service life.

“We have looked at the capability of the Kuwaiti fighters,” Sajjan said during a press conference in Riga, Latvia, where he had been visiting Canadian troops training there with other NATO members. “The biggest thing is right now they are not currently available. But we still want to pursue every single option.”

The immediacy of the issue is a result of a combination of delays in the F-35 program, which Canada has been part of since 2001, and politics. During the country’s 2015 election campaign Canadian Prime Minister Justin Trudeau, head of the Liberal Party, had pledged to halt the country’s participation in the Joint Strike Fighter project, a pet project of the previous administration of Conservative Party Prime Minister Stephen Harper, and run a new fighter jet competition.

Beyond the political and legal backlash this caused at home and with the United States, this created a potentially dangerous capability gap as the CF-18A+s are only supposed to remain functional until 2020 at the latest. Sajjan has said that it will likely take that long to simply make a new, final decision on the future of the RCAF’s fighter fleet.

So, Canada needs an interim solution and needs to get the ball rolling as soon as possible. Buying Kuwait’s F/A-18C/Ds, which have seen relatively little use, but have had good and steady maintenance and support over the years, could be a good option in principle.

But even if the RCAF were to get all of the Kuwaiti jets, a fleet of less than 30 aircraft, it still won't be enough to replace all of its existing Hornets. This means that it would either have to seek additional aircraft from other sources, invest in a service life extension program for some of the CF-18A+s as well, or have to scale back regular flight operations.

Kuwaiti’s own plan to replace those aircraft with newer and more capable F/A-18E/F Super Hornets has hit its own snags, too, with the U.S. State Department only formally approving the potential deal in November 2016. In the meantime, the country has quietly become embroiled in the Saudi Arabian-led intervention in Yemen. In February 2017, Kuwaiti Air Force Major General Abdullah Al Foudari revealed that the country had flown more than 3,000 sorties in support of the coalitions operations against Houthi rebels and their allies.

Earlier in September 2017, U.S. President Donald Trump claimed credit for expediting the State Department’s approval process, but there was still no indication about when Kuwait would finalize the approximately $5 billion deal with Boeing. Fed up with delays with the Super Hornet Deal, Kuwait had already ordered 28 Eurofighter Typhoons in 2016, which could have an impact on any purchase.

“During the same period, and the same trip to Saudi Arabia – which was my great honor representing our incredible country – His Highness personally asked me to expedite a $5 billion agreement for the sale of American F/A-18 Super Hornet fighting jets for Kuwait,” Trump said during a shared press conference with Kuwait’s Emir Sabah al-Ahmed al-Jaber al-Sabah on Sept. 7, 2017. “I am pleased to report that the State Department has now authorized this transferred purchase, which will not only strengthen our mutual security, but will greatly benefit American workers.”

Still, given these operational commitments, it’s unlikely that the Kuwaitis were keen to sell off their Hornets until some replacement jets have at least begun to arrive. As such, Sajjan said Canada was more actively pursuing a possible arrangement with Australia to buy some of its approximately 70 F/A-18A/B aircraft. The Royal Australian Air Force (RAAF) could more easily free up some of those jet since it began buying F/A-18E/F Super Hornets in 2009 and also plans to purchase a total of 72 F-35A Joint Strike Fighters, with the first examples slated to enter service in 2018.

The problem with this plan is that any retired RAAF Hornets would be of a similar vintage as Canada’s own jets, though they have also received upgrades over the years, notably the addition of the AN/APG-73 radar and the AIM-120 air-to-air missile, both features also found on Canadian CF-18A+ aircraft.

Both types are significantly less capable than the Super Hornet, which has a more powerful engines, an active electronically scanned radar, and a host of other improvements. As with the existing Canadian jets, the Australian planes could easily require significant time and money to keep flying safely. Any delays in the new RCAF fighter competition, which has yet to start, would only exacerbate the decision.

“That capability we needed a long time ago,” Sajjan said from Riga. “We had a plan in place, a very good plan that was going to fill the capability gap, invest in our current fleet and start the fighter replacement competition.”

And therein lies the biggest problem. In November 2016, the Canadian Defense Minister confirmed the plan was to buy 18 new F/A-18E/F Super Hornet jets for the RCAF straight from Boeing.

This idea made a lot of sense, as The War Zone’s own Tyler Rogoway noted at the time:

Unfortunately, that has steadily turned into a political impossibility. After Canadian aircraft maker Bombardier landed a major deal to sell 75 CSeries light airliners to American airline Delta, Boeing had filed a formal complaint. The Chicago-headquartered firm alleged foreign government subsidies and other unfair business practices had given Bombardier an unfair advantage and accused them of “dumping” the aircraft into a U.S. market at an artificially low price.

“We have obviously been looking at the Super Hornet aircraft from Boeing as a potential significant procurement of our new fighter jets,” Canadian Prime Minister Trudeau said on Sept 18, 2017. “But we won't do business with a company that's busy trying to sue us and put our aerospace workers out of business.”

Then on Sept. 26, 2017, the U.S. Department of Commerce sided with Boeing and threatened to levy massive import tariffs of nearly 200 percent on any Bombardier products entering the United States. Those duties will only go into effect if and when the U.S. International Trade Commission (ITC) rules in Boeing’s favor, a decision expected to come sometime in 2018.

Needless to say, this has effectively ended Canada’s consideration of the Super Hornet, at least for the time being. With the ITC still considering Boeing’s allegations, the dispute has yet to fully run its course. It is possible that the U.S. government may find itself eager to smooth over the matter as it has begun to involve more parties outside of just Canada and the United States.

U.K. Prime Minister Teresa May has now entered the debate, threatening retaliatory measure by her country if the United States moves ahead with the tariffs. More politics are at work there, since May’s Conservative Party is presently in a coalition government relying on support from the Democratic Unionist Party, a small political party in Northern Ireland. A facility in Northern Ireland employing more than 4,000 workers builds wings for Bombardier’s CSeries.

It’s also possible that the spat could impact the RCAF’s eventual fighter competition, as Boeing would almost undoubtedly have pitched the F/A-18E/F Super Hornet as an alternative to the F-35 Joint Strike Fighter. Back in 2014, Tyler Rogoway, then writing for Foxtrot Alpha, argued that Super Hornets made much more sense for Canada’s needs than the stealthy F-35s.

Without Boeing out of the mix, the most likely contenders would include the Dassault Rafale, the Eurofighter Typhoon, and the Saab Gripen, as well as Lockheed, which wants to pitch its F-35 again, but could also easily offer an upgraded F-16 Viper. A broader trade dispute could further limit those options if Lockheed decided to drop out in protest.

All of this could have an impact on the RCAF’s overall capabilities, since there is no debate that it will need a replacement for its CF-18s soon, if it doesn’t already. This in turn could hamper the service’s ability to conduct joint operations with allies in a crisis or even just train or make other routine commitments.

In May 2017, the Canadian fighters flew patrols over and around NATO ally Iceland, while earlier in September 2017, they began flying air policing missions out of Romania, another alliance member. In addition, Canada operates as part of a shared air defense scheme with the United States under the North American Aerospace Defense Command (NORAD).

“The RCAF is actively risk-managing the capability gap to simultaneously meet our NORAD and NATO commitments,” Canadian Armed Forces Captain Patricia Brunelle told CBC back in March 2017. “There will be several months of gap between the two missions [in Iceland and Romania.”

That gap only looks set to become more pronounced as the Canadian wades through the politics to find some interim solution to make sure the RCAF’s fighter force at least remains somewhat functional in the meantime.