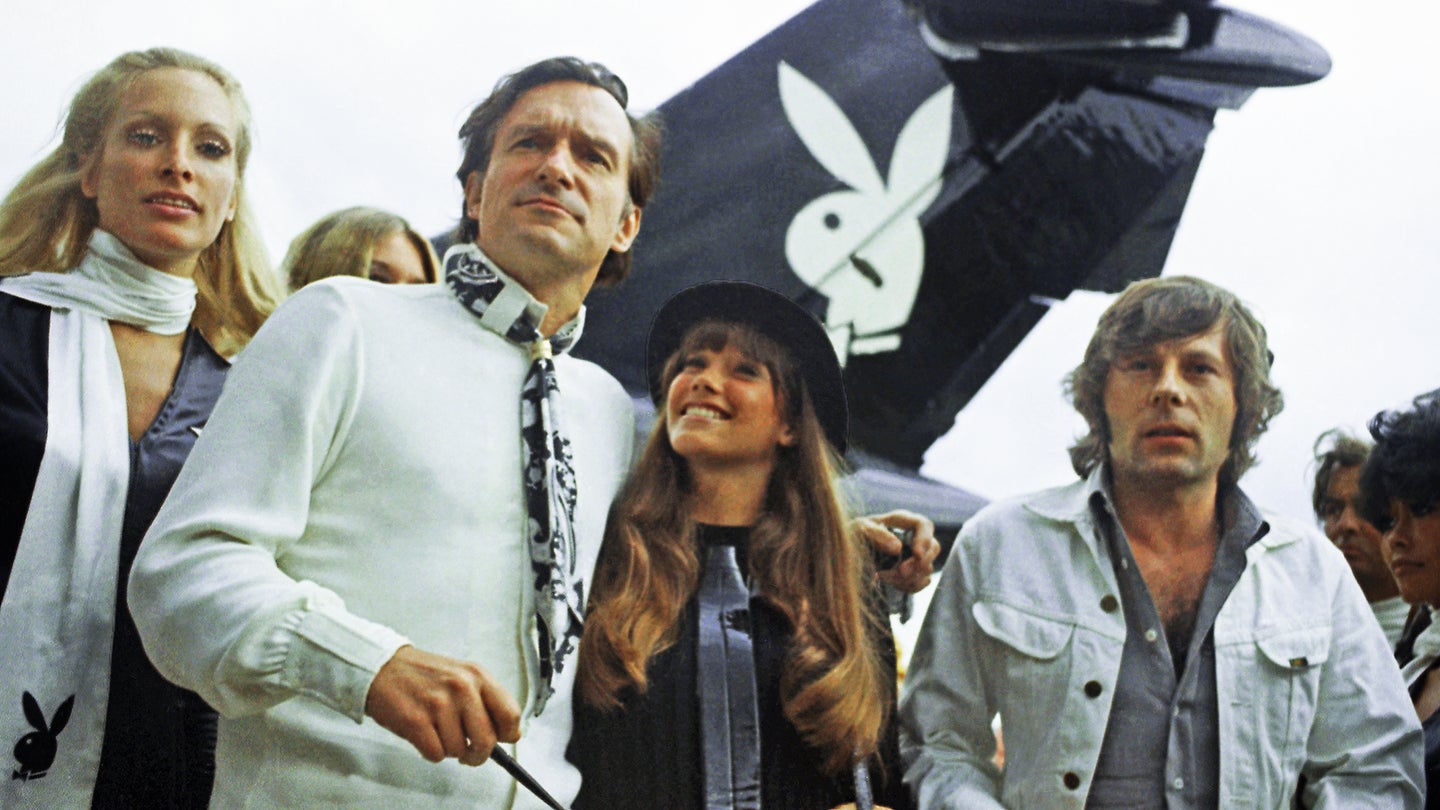 Long before the aerospace industry had a whole subset marketplace dedicated to providing custom lavish flying palaces for the super rich, wealthy and extravagant businessmen and entertainers would have to find companies willing to adapt airliners for their personal use—and the results were far from consistent. Elvis Presley's Convair 880 "Lisa Marie," Bobby Sherman's Boeing 707 "The Starship," and later Donald Trump's 727 are among the most well known of these pre-Boeing Business Jet airliner adaptations. But in the aviation community, one of these aircraft in particular may be the most beloved—the late Hugh Hefner's jet black DC-9 with the Playboy bunny emblazoned on its tail famously named "Big Bunny." The plane was nearly as unique and compelling as the man who commissioned it, and like Hefner, it has stood the test of time when it comes to capturing the public's imagination.

At the pinnacle of Playboy Magazine's popularity, in 1969, Hugh Hefner had pretty much every material possession a man could ask for—aside from his own flying Playboy Club. So after researching what airframe would be best suited for the culture icon's partying and logistical needs, Playboy Enterprises chose the still relatively new DC-9 as Hefner's flying chariot and brand ambassador.

For the era, the DC-9 was economical, reliable, offered a lot of square footage, had two of its own air-stairs, and most importantly, it was sleek and sexy, a trait the competing Boeing 737 didn't really offer. On January 27th, 1969 Playboy took possession of a DC-9-32 straight from the McDonnell Douglas factory at the cost of $5.5M—not a small check to write in 1969! The jet's registration number was N950PB.

N950PB went through an interior outfitting process unlike any jet before it. Instead of the bolted down velvet couches and audio consoles flown on other large private jets of the era, the Playboy jet got a futuristic Scandinavian design influenced interior that looked like something out of Space Odyssey 2001 with a little Barbarella thrown in.

Inside it featured a theater, multiple lounges, full bathrooms with showers, and of course a big rounded water bed for the top playboy himself. Throughout his life, Hefner did much of his business atop his bed sheets, and to him the bed wasn't just a place to sleep and to, well, party, it was also an office. The bed had silk sheets with a Tasmanian opossum beadspread and all the comfort and connectivity controls the airplane had to offer were build into a sweeping console that curved along the side of the eight foot bed, below the windows. It looked like Captain Kirk's quarters aboard the Starship Enterprise.

The jet also featured an integrated entertainment system which was way ahead of its time, including an 8-track surround sound system and multiple televisions, two film projectors, and a video system which was cutting edge tech in 1969. It was a disco in the sky replete with a dance lighting system. Amazingly, the jet also had "dimming" windows that would go black at the touch of a button—something that wasn't introduced to fleet airliners until the 787 well over 40 years later. The DC-9 also received an executive communications suite that allowed Hef and his guests to make phone calls while cruising through the stratosphere.

Big Bunny sported a special crew of flight attendants dubbed aptly "Jet Bunnies" who weren't casted just for their looks, but also for their abilities to actually provide flight attendant service while underway. The women were pulled from Hefner's clubs in Los Angeles and Chicago and sent for training with Continental Airlines. Passing the famous airline's intense flight attendant school was a prerequisite for the job.

Their outfits were one of a kind, designed by fashion designer Walter Holmes with Hefner's input. Generally they featured leather mini dresses, black go-go boots, white aviator scarves, and even bunny ears and tails on some occasions. Hefner wrote in 2010 that "they look as though they had just stepped out of a Bond movie."

The N950PB's iconic paint job was unlike any other at the time. No other private jet had been painted black before so Playboy had to seek special approval from the FAA before applying the unique scheme. Hefner wanted the plane to stand out, and the glossy black livery sure did the trick. Extra bright spotlights were also installed on the jet's exterior to light up the Playboy bunny on its tail for all to see as Hefner made his grand arrivals to various locales.

The jet hauled Hugh and his entourage of beautiful women, celebrities, and Playboy staff all over the world, including some extremely exotic and austere locales. Hefner also used the jet to commute from his properties in Los Angeles and Chicago where he taped episodes of Playboy After Dark. "I loved the convenience of the jet... It was literally a floating apartment with a bedroom, a living room, a dining room and a disco area in the back" Hefner told the Wall Street Journal while describing his memories of the plane. "I lent it to Elvis Presley to fly to concerts and I lent it to Yul Brynner... When anyone asks me if I ever miss the plane, I reply, 'only when I fly.'"

The Playboy jet was constantly visited by some of the most famous people of the era. Poet Shel Silverstein, artist Leroy Neiman, director Roman Polanski and many others were regulars aboard. Sonny and Cher and Elvis leased the jet for international tours. Big Bunny was such a big deal that lavish reception parties would be organized for its arrival in foreign countries, often including international celebrities and local elite.

In 1975, Hugh even lent Big Bunny to "Operation Babylift" which saw the jet fly babies orphaned by the Vietnam War to New York City where they were received by their adoptive families. The jet was also used to ferry a gorilla named Baltimore Jack across the U.S. to meet a potential mate.

The massive cost of maintaining and operating a non-revenue airliner, with its own handpicked crew no less, was too great for Playboy to justify as the magazine's circulation began to decline in the mid 1970s. Hefner had also fallen in love with a new toy, an estate that would become widely known as the Playboy Mansion which he acquired in 1971. By 1974 he was no longer splitting his time between Los Angeles and Chicago, which meant the need for the plane was largely reduced.

The famous jet was sold to Venezuelan Airlines in 1975. It went on to spend decades in and out of storage before ending up with Aeromexico where it served running normal airline service, its incredible interior long gone, until 2004 when it was finally retired. The parted-out jet's fuselage is now an educational tool having been donated to the city of Cadereyta in Mexico.

Oddly enough, Hefner's DC-9 wasn't the last aircraft to sport the jet black paint scheme with a big white Playboy bunny on its tail. Navy fast jet test squadron VX-4 "Evaluators" adopted the Playboy bunny insignia in the 1960s and flew it on their aircraft. Following the arrival of Big Bunny on the world stage, one of VX-4's F-4 Phantoms always wore the same gloss black paint scheme. This aircraft was famously nicknamed "Vandy 1" after the unit's "Vandy" callsign.

The F-4 that was painted in the livery ended its service life in 1987 upon which time the motif was transferred to one of the unit's F-14 Tomcats. Multiple Tomcats wore it over the years, even after VX-4 was shuttered in 1994 and VX-9 "Vampires" took over its duties. The Vampires carried on the Vandy 1 tradition with F-14D serial number 164604 being the last jet to wear the motif. It did so until it was pulled from service and retired around 2005.

The jet lived its entire life at NAWS Point Mugu and was the last F-14 ever built. It had never been deployed aboard an aircraft carrier and was just 12 years old when it was pulled from service. It sits today as a gate guard at NAS Oceana, its Vandy 1 scheme long gone. Instead it wears the markings of VF-103.

VX-9 has not applied a Vandy 1 paint scheme to another jet since 164604's retirement and it is debatable if the Playboy insignia would even be allowed to fly on a Navy fighter's tail again considering the politically correct social climate within the military today. But all is not lost, the paint job has been applied on a handful of private jet warbirds, so it still graces the skies to this very day, albeit in a non-governmental or corporate capacity.

Hugh Hefner is such an interesting character who lived an absolutely fascinating life. He was both revered and despised, but he truly embodied the lifestyle that his brand promoted. Part of that was having the best and most outlandish of toys. A big black jet that was as much a flying nightclub as it was a business tool certainly fits that bill.

In many ways the whole concept behind Big Bunny was far ahead of its time. Today billionaires can spend hundreds of millions of dollars on their flying palaces, with Middle Eastern royalty and Russian oligarchs being prime supporters of a growing ultra lavish private air travel marketplace. Some of these aircraft make the Playboy DC-9 look minuscule in scale as even Boeing's largest aircraft, the 747-8i has been sold as a private Boeing Business Jet. But none of these dream machines will have the historic significance of Big Bunny, nor will their owners be remembered quite like Hugh Hefner.