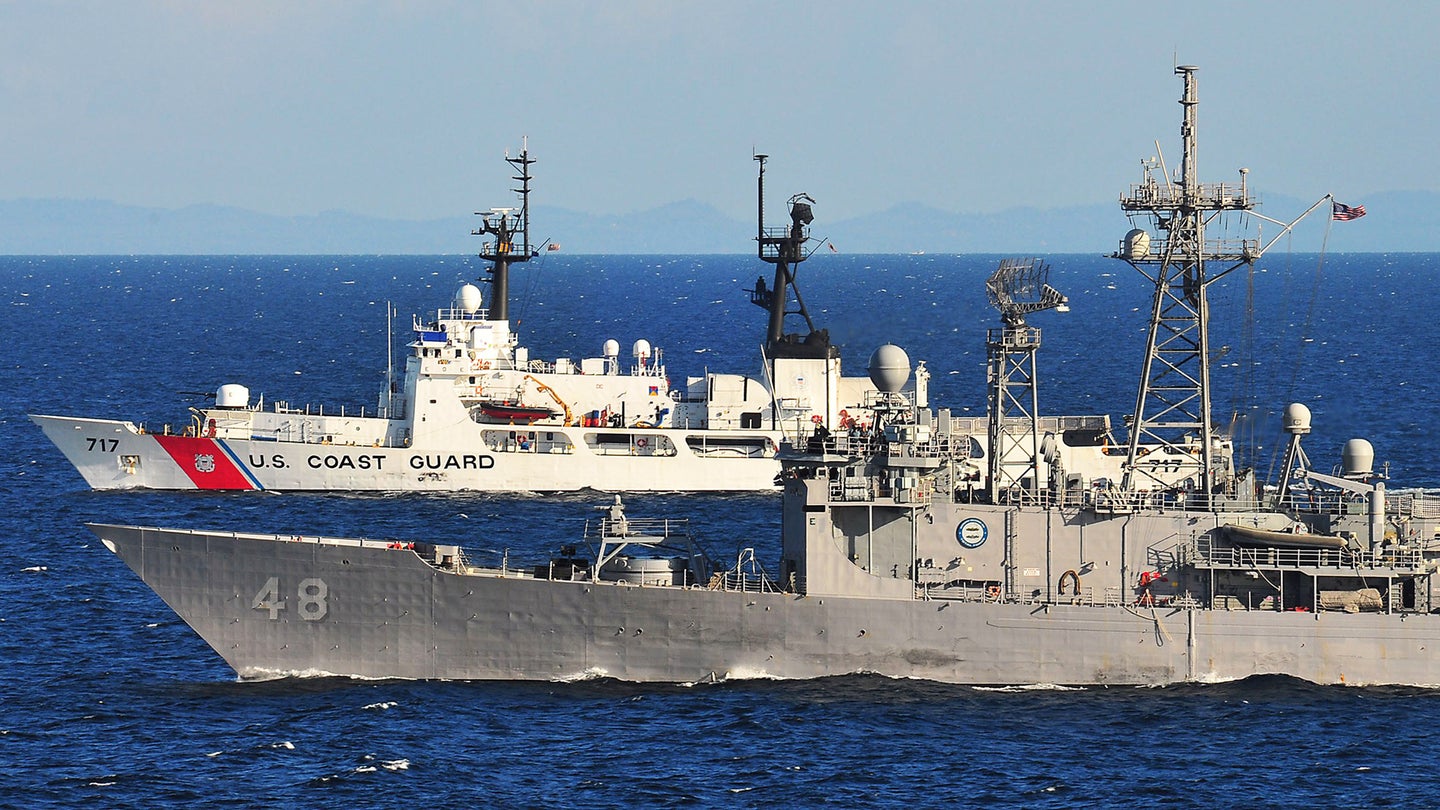 On its mission to field a 355 ship fleet, the US Navy has been looking at what it has in storage to help make that goal a reality. Even the carrier USS Kitty Hawk has been put forward as a possible candidate for regeneration, although the reality of what it would take to truly make such an endeavor successful puts it firmly in the unlikely category. But the seven Oliver Hazard Perry class frigates now sitting in mothballs tell another story. Now Secretary of Navy Richard Spencer is saying these ships could be regenerated very cheaply and without any major upgrades at all, but their mission set would be very limited.

Many of the Navy's retired Perry class frigates were sold to friendly countries all over the globe. Many of those navies have drastically upgraded the stoutly built ships with modern systems, including vertical launch cells and RIM-162 Evolved Sea Sparrow Missiles (ESSM). If the Navy were to go down a similar path with the seven Perry class frigates it still has its hands on, these ships could serve in higher threat environments than their Littoral Combat Ship replacements. In addition, foreign operators of the Perry class plan on sailing the ships for decades to comes, so there really isn't any reason why the US Navy couldn't do the same.

But under the plan that SECNAV Spencer is talking about, these ships wouldn't get any combat system upgrades at all. Instead they would be seaworthy and navigation ready only. USNI News reports Spencer mentioned that other navies have gotten retired Perry class frigates back out to sea for as little as $35,000, which is about one sixth the price of a full tank of gas for the type.

“Is a DDG the thing to put for drug interdictions down in the Caribbean? I don’t think so... Do we actually have something in the portfolio right now? One of the things we might look at is bringing the Perry-class to do a limited drug interdiction mode... No combat systems, but sea-ready, navigation ready, radar ready out the door... That’s a pretty inexpensive proven platform right there...Can you arm it up with Tomahawks? No.”

I know what you're asking yourself—why not just fund the Coast Guard to operate these ships and get the Navy out of the drug interdiction game altogether? Good question, one that I am not fully prepared to answer definitively on, but it likely has to do with petty budget squabbling, the fact that the Coast Guard is part of the Department of Homeland Security, and fear of mission and budget loss on behalf of the Navy. And remember, it's all about claiming a 355 ship fleet, and Coast Guard vessels don't factor into that goal.

Let's be clear, the DoD gives a lot to the war on drugs—including many absurdly mismatched capabilities like hunting for drug boats with heavy bombers. So the fact that US Navy surface combatants continue to support these operations isn't surprising. But in an era of overworked crews and hardware, and a growing number of priorities to satisfy with limited budgets, maybe rethinking how the DoD contributes to this mission is necessary before committing what will be largely single role assets to it.

By reviewing the roles of the other federal agencies that primarily deal with drug interdiction on a daily basis, along with coming up with a list of what gear they would need to execute the mission without the DoD's help, we could get a better idea of if getting the Navy—and possibly the other services as well—out of this mission makes sense or not. We would also get a better idea of what the mission truly costs to sustain.

With tightening land borders, the sea will only become a more prevalent drug smuggling medium, so more advanced maritime assets will be needed in the future to accomplish the mission proficiently, not the other way around. Maybe a smaller commercial grade vessel with more advanced sensors could be built and operated over time for far less than the aging Perry class. Going that route could also offer more capability to confront future smuggling threats.

So what I am saying here is there are alternatives to using a destroyer or LCS to hunt for drug smugglers, and even the Perry class may be better used as an upgraded surface combatant capable of operating in medium to higher threat scenarios or even for lower intensity operations in troubled regions than as a stripped-down drug interdiction platform.

On the other hand, maybe they are suited for this mission, but in the hands of the Coast Guard not the Navy. And if the Coast Guard is given a bump in budget to field these seven frigates instead of the Navy, the Navy would then lower their 355 ship goal to 348 ships right?

Don't count on it.