The Air Force Association’s (AFA) annual Air, Space, and Cyber Conference is an opportunity for senior U.S. Air Force leaders, along with other important voices in military aviation and the private sector, to get together and share their thoughts on the future of air power. It's combined with an technology exhibition where defense contractors come to show off their latest military aircraft, aviation systems, and other relevant products.

We took to the show floor to take pictures of what was on offer and talk with representatives at the various booths. We found a lot of interesting items and picked up a number of tidbits along the way.

Here's a sampling of what we found.

One of the hot topics at the 2017 Air, Space, and Cyber Conference was the Air Force's ongoing efforts to replace its aging E-8C JSTARS radar planes. One of the competitors is a team led by Northrop Grumman, which also includes Gulfstream and L3. At Gulfstream's booth we found a model of the proposed aircraft, which will use the G550 series airframe, seen above, as well as concept art, seen below.

You'll note that the two don't look the same. Understandably, as time goes on, requirements and plans change, and we learned from the representatives at the booth that the model was quite old and that the artwork was more recent. Most notably, the rendering in the background showed the plane's mid-air refueling receptacle in the nose. Apparently, Northrop Grumman has gone back and forth on exactly where they think it would be best to position for this feature, which would allow the aircraft to stay on station for a extended period of time, a key capability for this type of sensor platform orbiting the battlefield.

Gulfstream also had a model of another G550 the company is working on for the U.S. Navy. Commonly known as the NC-37B, to patrol and otherwise monitor testing grounds to keep out civilians and gather research data. L3 recently chose to use a similar airframe as the basis for a replacement for the Air Force's EC-130H Compass Call jamming aircraft.

The models for the JSTARS replacement concept from a team consisting of Lockheed Martin, Raytheon, Bombardier, and the Sierra Nevada Corporation were much more consistent. The basic aircraft at the core of the proposal is Bombadier's Global 6000 series.

Another big project attracting the attention of major defense contractors is the Air Force's search for a new basic jet trainer, a program known as T-X. Teams made up of Boeing and Saab, Lockheed Martin and Korean Aerospace Industries, and Sierra Nevada and Turkish Aerospace Industries have all submitted proposals. Northrop Grumman and BAE Systems dropped out of the competition suddenly last winter.

Italian firm Leonardo, formerly known as Alenia Aermacchi has also been working on a T-X submission, initially pair up with first General Dynamics and then Raytheon, before settling on its own U.S. subsidiary DRS as its path into the competition. All of the entrants brought models of their offerings – Boeing even brought 1:1 scale mock up and offered to take pictures in front of it illuminated by garish, multi-color stage lights – but only Leonardo painted theirs in something other than the standard scheme worn by the Air Force's existing T-38s.

L3 brought two models of the AT-802L Longsword, a modified Air Tractor AT-802 crop duster, each with a different camouflage scheme. This aircraft recently took part in the Air Force's OA-X experiment. Sierra Nevada and Textron also had models of the A-29 Super Tucano and Scorpion light attack jet respectively, the two firms entrants into the light attack tests. Textron had submitted the AT-6 Wolverine, as well.

The Air Force is has also been struggling to replace its aging fleet of UH-1N Twin Hueys, which perform a host of specialized functions, including helping provide security for remote intercontinental ballistic missile sites and VIP transport duties, including being on hand to spirit senior U.S. government officials off to secure facilities in a crisis.

Sikorsky, now part of Lockheed Martin, has long pitched various versions of the venerable UH-60 Black Hawk for these roles, most recently new versions based on the HH-60U rescue helicopter. We didn't get a chance to ask any company representatives whether or not they knew why the Air Force hates the "U" designation so much, an odd detail we at The War Zone discovered thanks to a Freedom of Information Act Request.

In 2010, the Aeronautical Systems Center – now called the Air Force Life Cycle Management Center – asked for the designation HH-60W for the new helicopters, and if that was unavailable, for HH-60P, because of an unspecified "negative connotation" surrounding the letter U in the personnel recovery community. Of queries to various Air Force command and and sources have turned up no answers, so if you know why, feel free to let us know! The Air Force's top headquarters, which has the final say on these decisions rejected the request and stuck with HH-60U. However, the service is separately buying new combat search and rescue helicopters, which finally have its preferred "W" nomenclature.

At the AFA conference, though, Sierra Nevada brought along the model of an apparent competitor, an updated UH-60L it has dubbed the Force Hawk, which features new avionics and missions systems, as well as uprated engines. The configuration sounds very much like the U.S. Army's UH-60V upgrade package. The model on the show floor wore a similar paint scheme as the UH-1Ns assigned to the Air Force's 1st Helicopter Squadron at Andrews Air Force Base near Washington, D.C.

Other contractors seemed to have arranged their displays without any particular program in mind, with an eye toward fulfilling specialized requirements, or in an apparent desire to draw the attention of the many foreign military personnel in attendance. For instance, Airbus had a large model of its A400M airlifter outfitted as a tanker with a refueling pod for the probe-and-drogue system under each wing and painted in fictional Air Force colors. The European aviation consortium has pitched the aircraft to the Air Force in the past and recently delivered tanker variants to the German Luftwaffe, but there doesn't appear to be a existing American requirement for such a plane.

Similarly, the US Air Force isn't likely to be interested in buying Kawaski's C-2 cargo aircraft. Japan is increasingly interested in entering the global arms market and this aircraft could be a competitive option, especially given that Boeing has shuttered the C-17 production line. The cutaway model of the plane shows a cargo of construction equipment, possibly highlighting its utility in humanitarian relief and disaster response mission sets.

Perhaps more interesting were the various contractors offering aviation services for testing and training purposes, a very lucrative and expanding market. Though there were reports that Airborne Tactical Advantage Company (ATAC) had purchased a lot of ex-French Air Force Dassault Mirage F1 fighter jets to fly "Red Air" adversary missions, it was Draken International that featured the aircraft in its company literature. Neither firm had a model of the aircraft at their booth, though ATAC did have one of the firm's Israeli Aircraft Industries Kfirs.

Omega had a model of a aerial refueling equipped McDonnell Douglas DC-10, seen below, and a Boeing 707. The company says it got many of its DC-10s second hand from Japan Airlines, while at least one 707 came from a wealthy Middle Eastern oil magnate. The representative at the booth said that AFA wouldn't allow them to serve beer, which they often do at other events. In those cases, a tap runs to a keg through the model rear end of a 707, mimicking the probe-and-drogue refueling system, but dispensing something entirely different.

In addition to manned aircraft, drones were, unsurprisingly, a major feature on the floor of the expo. Textron had a mock up of their recently unveiled Nightwarden unmanned aircraft hanging above their booth. Derived from AAI's enlarged Shadow M2, Nightwarden expands on the original design, adding improved payload capacity for more powerful sensors and lightweight weapons.

Beyond aircraft and drones, there were also weapons. Aerojet Rocketdyne had inert display versions of their Focused Lethality Munition (FLM) and BLU-129/B composite bomb casings, both of which produce little shrapnel, reducing the potential for collateral damage. The FLM is a warhead option for the 250-pound class GBU-39/B Small Diameter Bomb, while the BLU-129/B forms the core of the Very Low Collateral Damage Bomb (VLCDB) variant of the 500-pound class Joint Direct Attack Munition (JDAM), also known as the GBU-38(V)5/B.

Again, the displays weren't just limited to American defense contractors focused on Air Force contracts. Turkish firm Roketsan had a model of their SOM-J cruise missile. The J variant of the weapon is a shared development with Lockheed Martin specifically sized to fit in the internal weapons bay on the F-35 Joint Strike Fighters the Turkish Air Force is looking to buy.

There were podded sensor and electronic warfare systems, as well. Harris had a cutaway of the podded version of its Advanced Integrated Defensive Electronic Warfare Suite (AIDEWS), the AN/ALQ-211(V)9. The company makes internal versions of the same system for F-16 Viper fighter jet and the CV-22 Osprey tilt-rotor.

Lockheed Martin had the Legion Pod on display at its booth. On Sept. 19, 2017, the company announced the Air Force had chosen this system as the winner of a competition to add infrared search-and-track (IRST) capability to its F-15C Eagle fighter jets. In addition to the IRST functionality, the pod is modular, meaning that the Air Force could decide to add additional sensors or other equipment, like sensors or data-links, to potentially make the older Eagles even more capable.

Lastly, a number of vendors were pitching hand-held jammers specifically to defeat small drones. The potential threat of commercially available quad- and hex-copter type unmanned aircraft hasbecome increasingly apparent in recent years and the Air Force in particular has been looking for ways to keep them out of its bases at home and abroad.

Many of these devices, including the one from Battelle seen below, look and handle similarly to standard combat rifles. The firm's mock up had a number of "kill" markings, but when we asked, the representative at the booth said they were unfortunately only for show and did not reflect any successes in tests.

This is just some of what was on display and without a doubt there is even more advanced technology that remains hidden away from the public. 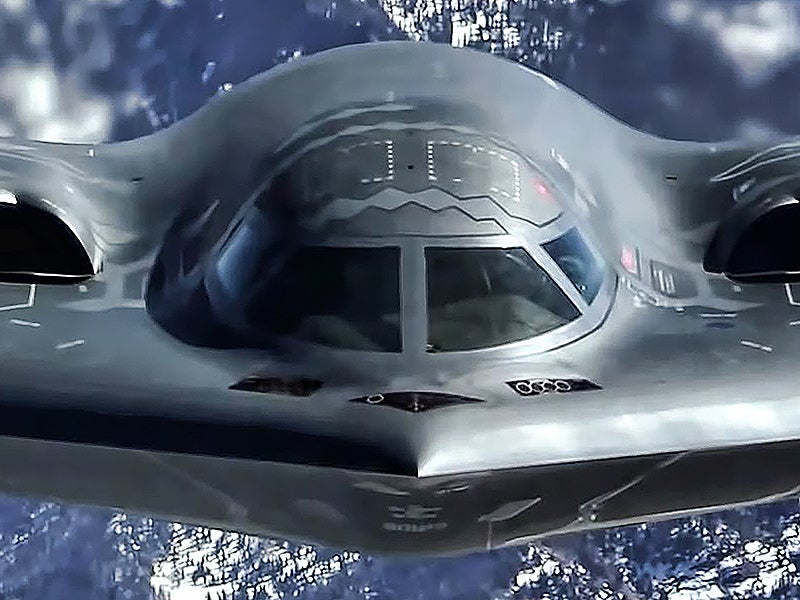 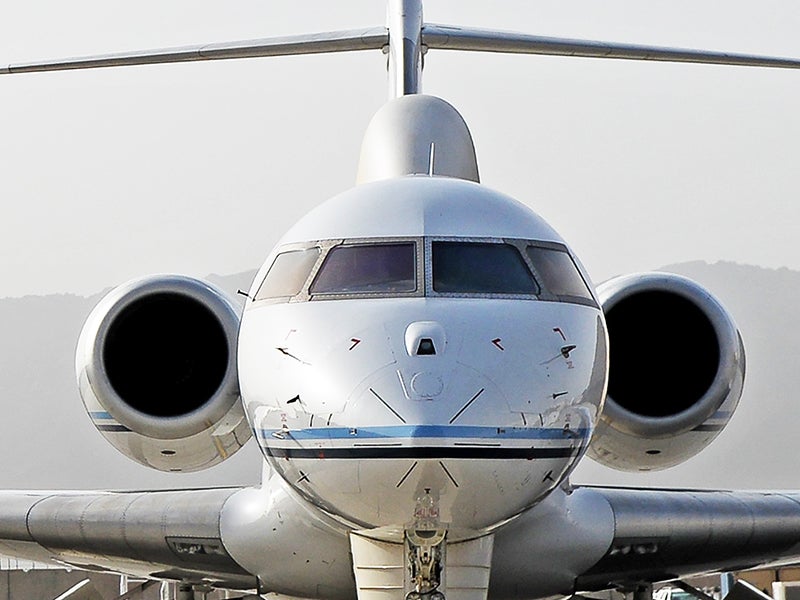