The reclusive regime proved it can hit Guam as the US and its allies continue to debate the best courses of action. 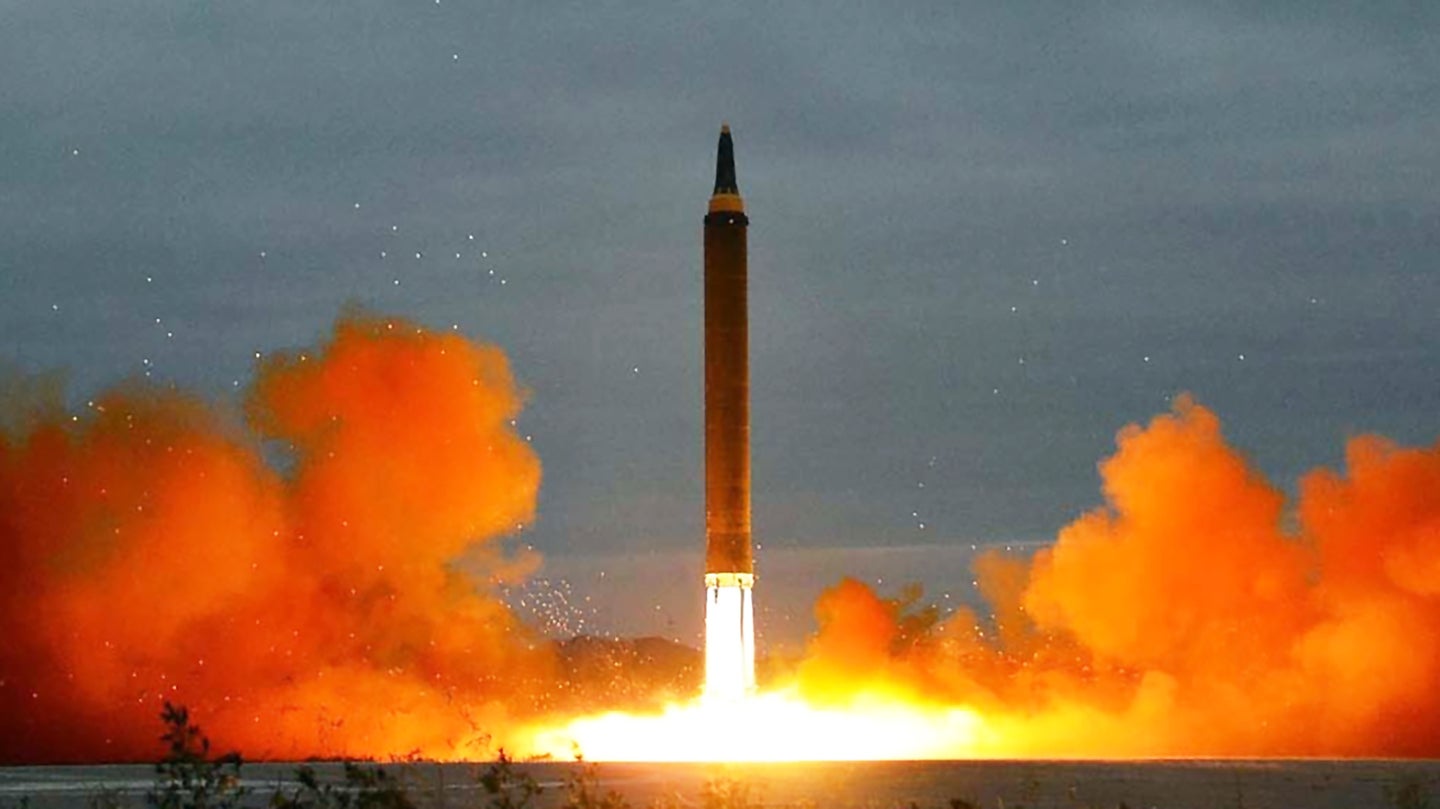 North Korea has successfully conducted its longest downrange ballistic missile test ever with yet another provocative launch over Japan, showing it has at least the range to hit the U.S. Pacific Ocean territory of Guam. The incident came after the United Nations Security Council hit the increasingly isolated country with the toughest sanctions to date. At the same time there's an ongoing debate between the United states and its allies all about how to constrain the Hermit Kingdom amid concerns that whatever they decide could provoke an arms race in East Asia.

On Sept. 14, 2017, the North Koreans fired what appeared to be another Hwasong-12 intermediate range ballistic missile. It reached a maximum altitude of approximately almost 480 miles and traveled a total distance of around 2,300 miles, over the Japanese home island of Hokkaido, before falling into the Pacific Ocean some 17 minutes later. This was particularly notable since it was a much shallower launch envelope than in previous tests and more representative of what one might expect to see in an actual strike.

U.S. Pacific Command said North Korea launched the liquid-fuel missile from the Sunan district of the country’s capital Pyongyang, which is home to its international airport and that it posed no threat to North America or Guam. “We are working with our interagency partners on a more detailed assessment and we will provide a public update if warranted,” the official statement said.

Though the missile did not represent an imminent threat to Guam, observers and researchers were quick to point out that the launch conclusively proved the Hwasong-12 had the range to hit the island. In August 2017, North Korea had threatened to fire the weapons near the American possession following U.S. President Donald Trump’s now infamous “fire and fury” comments.

It was also the second time in three weeks that the North Koreans had sent a missile flying over Japanese territory, widely seen as a significant escalation in their provocations. This in turn had prompted the U.N. Security Council to impose new and more severe sanctions on the country, curtailing oil imports, banning textile exports, and placing major restrictions on its the ability of its government and citizens to conduct business abroad.

North Korean state media responded to the announcement with its traditional bluster, threatening to use its nuclear arsenals to send Japan “into the sea” and turn the United States into “ashes and darkness.” Though these threats thankfully seem remote, North Korea has successfully demonstrated an intercontinental ballistic missile with the potential to hit the continental United States, the Hwasong-14, as well as tested what experts believe is a thermonuclear warhead able to fit inside the weapon.

“I‘m assuming it was a hydrogen bomb,” U.S. Air Force General John Hyten, head of U.S. Strategic Command told reporters shortly before learning of the latest missile launch. “I have to make that assumption as a military officer.”

This was the first official statement from the U.S. military on the type of weapon involved in North Korea’s sixth nuclear test. Previous U.S. government comments about the device, which had an explosive force of at least 160 kilotons according to some government estimates, had described it simply as “advanced.”

Hyten was answering questions from members of the press who had accompanied Secretary of Defense James Mattis to the command’s headquarters at Offutt Air Force Base in Nebraska. Personnel quickly ushered Hyten off to his command center and press off the base after it became apparent the North Koreans had fired another missile.

“Is there something going on?” Hyten reportedly asked. “Yeah,” an aide responded matter-of-factly.

Beyond just the missile launch itself, what was going on was North Korea was demonstrating its continued defiance in the face of increasing international pressure. Even before the new sanctions, the country’s state media reported that Premier Kim Jong Un had demanded his weapon designers and strategic forces push forward in their development programs and plan for more tests across Japan and into the Pacific Ocean.

“It was nothing novel to our ability to observe and orient ourselves,” Secretary of Defense Mattis told reporters in Nebraska after reconnecting with the pool following the launch. Still, it “sent millions of Japanese into duck-and-cover.”

So, needless to say, this has prompted renewed debate among the major parties in the region, namely Japan, South Korea, China, and Russia, as well as the United States, about how to move forward. Chinese and Russian officials reportedly pushed their American counterparts to drop some of their sanctions demands, namely a complete halt in oil deliveries to North Korea, in exchange for their votes at the United Nations.

However, it was clear the United States had not necessarily been pleased with the outcome. At a Congressional hearing earlier in September 2017, Marshall Billingslea, Assistant Secretary of Treasury for Terrorist Financing, described how North Korea had been able to skirt sanctions with a network of shadowy shipping companies.

Ships would illegally switch their transponders on and off before entering Chinese and Russian ports to load and unload prohibited cargoes, sometimes leaving them to be picked up by a different ship for further transshipment. Chinese and Russian officials seemed unwilling or unable to do much about this, suggesting the long-term efficacy of sanctions regimes would be limited unless something changed in those policies. This has led to calls for a more proactive blockade around North Korea, which we have suggested is one potential means of exerting additional pressure on the Kim regime.

“China supplies North Korea with most of its oil. Russia is the largest employer of North Korean forced labor,” U.S. Secretary of State Rex Tillerson subsequently said in a statement after the Sept. 14 missile launch. “China and Russia must indicate their intolerance for these reckless missile launches by taking direct actions of their own.”

Chinese and Russian officials dismissed the criticism, pointing instead to the United States and its allies and their own military maneuvers, which they say are only inflaming the situation. Echoing its long standing position, China urged all sides to accept their individual responsibilities to reduce tensions without naming any side in particular.

“We are demonstrating not only our intolerance towards the illegal launches, but also our willingness to settle the situation in the Korean peninsula,” Russian foreign ministry spokeswoman Maria Zakharova said in response to Tillerson’s remarks. “Regrettably, aggressive rhetoric is the only thing coming from Washington.”

But if sanctions can’t or won’t work in the immediate future, then the United States and its allies will increasingly feel they need to entertain other options and it’s not clear that the U.S., Japanese, and South Korean governments agree on the alternatives. After its sixth nuclear weapon test, The War Zone’s Tyler Rogoway ran through the available options short of an all-out confrontation, writing:

Things have moved so fast over the last 18 months when it comes to Pyongyang's nuclear and missile programs that it seems as if many are in denial of just how perilous the situation has become. Above all else, the summer has underlined one cold and harsh reality – Kim Jong Un clearly has a plan and the U.S. and its allies clearly don't.

For their part, the Japanese have sought to downplay the obvious impact of North Korean missiles routinely flying past overhead. The country’s Chief Cabinet Secretary Yoshihide Suga said that there had been no attempt to shoot down the missile on Sept. 14, because there was no risk of it coming down on Japanese territory.

However, it might’ve been more a product of the lack of any readily available means to do so reliably. Though Japan has is working to acquire more advanced ballistic missile defenses, its present primary air defense system, the Patriot surface-to-air missile, has at best a limited utility against larger ballistic missiles such as the Hwasong-12. The country’s planned future fleet Aegis Ballistic Missile Defense-equipped ships, along with equally capable shore sites, may change that calculus.

Perhaps more notably, South Korean President Moon Jae-in has gone on the record to say that his country is not looking to develop its own nuclear weapons or allow the United States to bring its nuclear weapons back. "To respond to North Korea by having our own nuclear weapons will not maintain peace on the Korean Peninsula and could lead to a nuclear arms race in northeast Asia," he told CNN in an interview on Sept. 14, 2017.

At the same time, though, Moon has overseen a continued expansion of South Korea’s conventional arsenal, notably continuing the development of the increasingly capable Hyunmoo-2 ballistic missile, and maintained a three-tier response plan his conservative predecessor, Park Geun-hye, put into place. This includes a standing threat to “decapitate” the Kim regime’s senior leadership during a crisis, meant, it seems, to hobble its ability to function out of fear of constant attack, as we have previously explained in detail. He has also reversed course of a previous desire to slow or outright halt the U.S. military's deployment of Terminal High Altitude Air Defense (THAAD) ballistic missile interceptors into the country.

So, while South Korea seems intent on avoid a nuclear arms race, it seems to be perfectly content to match North Korea’s provocations with conventional responses of increasingly dubious impact. On Sept. 15, 2017, in what has become a routine maneuver, South Korean forces fired a pair of Hyunmoo-2s, ostensibly demonstrating their ability to hit Pyongyang’s airport, as well as a seperate conventional artillery drill near the demilitarized zone. Earlier in September, the South Korean Air Force had also conducted a live-fire test of its new German-Swedish-designed Taurus KEPD 350 cruise missile, another component of the so-called “Kill Chain” aimed at North Korean targets.

"Dialogue is impossible in a situation like this," Moon said during a meeting of the country’s National Security Council on Sept. 15, 2017, according to Yonhap News. "In case North Korea undertakes provocations against us or our ally, we have the power to destroy [the North] beyond recovery."

As we at The War Zone have noted many times before, these tit-for-tat shows of force are unlikely to have any impact unless backed by a more credible willingness to act. North Korea may have chosen the dual-use civilian-military Pyongyang International Airport, situated inside a populated area full of innocent bystanders, as a launch site specifically to further deter any actual forceful response. But the U.S. government may be increasingly anxious to find a way to act.

"We're out of time," U.S. Army General H. R. McMaster, presently serving as Trump's National Security Adviser said at a White House press conference on Sept. 15, 2017. "We're out of road," he continued before stressing that "there is a military option."

As North Korea continues to defy sanctions and international condemnation, it seems be increasingly hard to ignore the need to seek different means of exerting pressure on the reclusive Communist regime without having to resort to an open conflict that would be disastrous for all parties in the region. Hopefully, the United States and its allies will explore all of potential the avenues before resorting to a military option.