The change seems almost entirely driven by the USAF's desire to match one of President Trump's off-the-cuff claims. 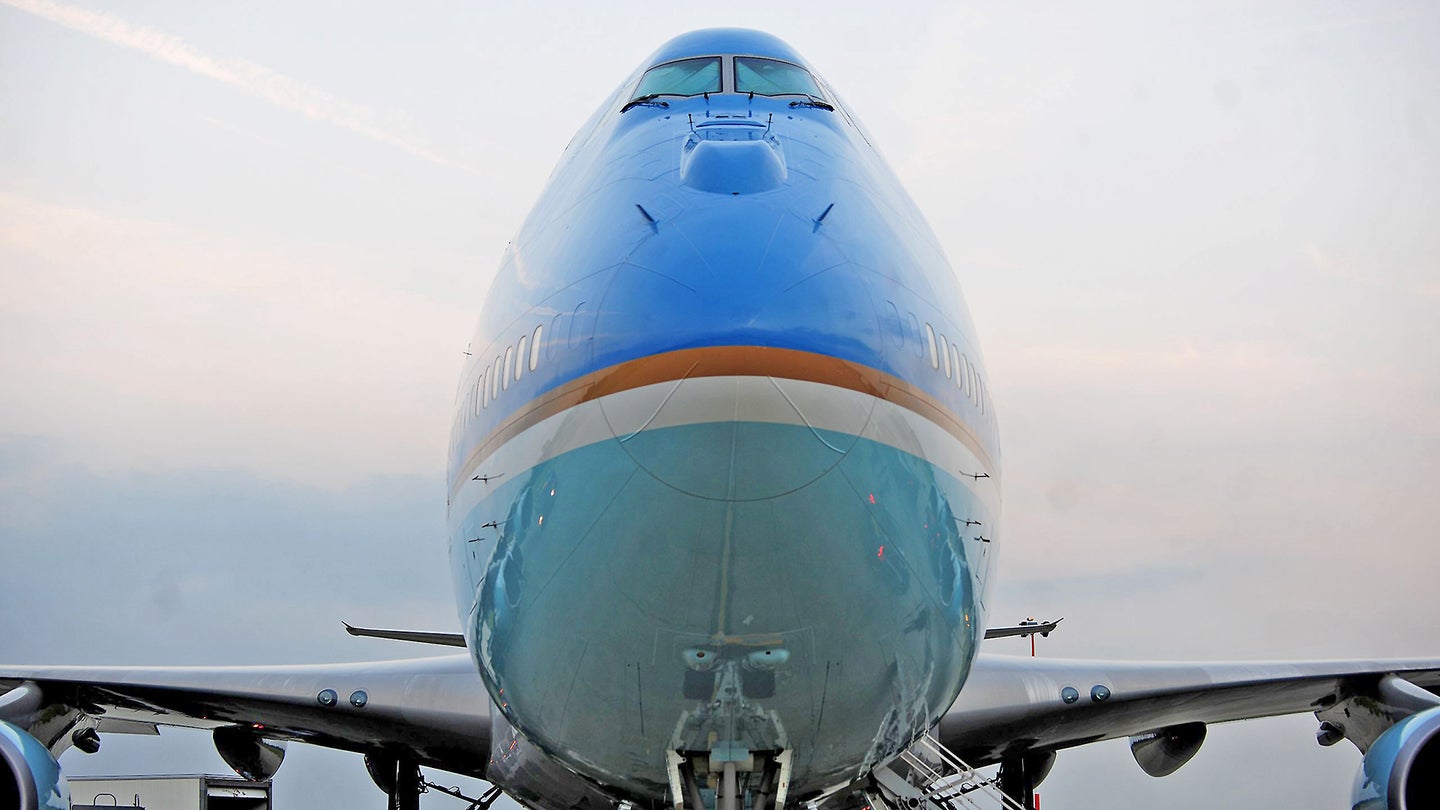 On the campaign trail and since his election victory, President Donald Trump's "shoot-from-the-hip" speaking style has made for a number of controversial, dubious, and outright false statements about a number of U.S. military protects. Now, it appears that the U.S. Air Force is slashing key requirements, including mid-air refueling, for its new presidential aircraft, the future Air Force Ones, to try and make good on his claim about cutting the cost of the program by $1 billion.

Defense One’s Marcus Weisgerber, who has been following this ongoing saga uncovered the new details, as the Air Force tries to match Trump’s boast that he trimmed $1 billion from the program's still unknown final price tag after an hour of negotiations with Boeing CEO Dennis Muilenburg. The president made the comments during a rally in Florida in February 2017 and no one had been able to definitely explain where the specific figure came from.

According to Defense One, during their December 2016 meeting, Muilenburg gave trump four separate options for how to go about purchasing the pair of new Air Force Ones, ranging in cost from approximately $4.2 billion to $2.28 billion. “Understandably, all these modifications and customizations, implemented in the appropriately secure facility with all personnel cleared to the highest level, drive considerable cost into the aircraft so as to make Air Force One the ‘flying White House’ it is,” one of the briefly slides reportedly explained.

The Air Force subsequently rejected every single one of the plans, including the most expensive, which involved purchasing two new 747-8i aircraft, but only equipping one with the full “presidential cabin configuration.” This makes perfect sense, since the entire point of having two of the planes in the first place is to be able to tight scheduling requirements and an often high operational tempo. With a pair of aircraft, its easier to make sure there's always one ready to go, especially if one suddenly ends up out of action, which can happen surprisingly easily.

But rather than insisting that the design specifications were largely locked down by the unique requirements of Air Force One – namely the need for an airplane that can safely transport the president and his staff in the middle of a doomsday scenario while keeping them in constant, secure contact with the outside world so that the United States government can continue to function throughout – the service has apparently begun trimming capabilities to try and save $1 billion in total costs. The Air Force had already managed to save some money by purchasing a pair of 747-8is that Boeing originally built for a now defunct Russian airline as the base airframes for the presidential conversions.

The cost-cutting is continuing and most notably has resulted in plans to strip the aerial refueling capability requirement, which is a feature on the existing VC-25As that presently perform the presidential airlift mission, from the new Air Force Ones. The Air Force downplayed the significance of this decision to Defense One, while the Muilenburg’s briefing pointed out that the standard 787-8i had the range to reach all by some parts of Asia from Washington, D.C.

Weisgerber’s sources added that it wasn’t a major problem since “the current aircraft have never made use of that capability.” But that claim appears to be false.

In 2014, a former U.S. Air Force boom operator told The War Zone’s Tyler Rogoway, then writing for Foxtrot Alpha, that he had topped up Air Force One on more than one occasion. One of these instances involved a nighttime link up with the tanker as President George W. Bush traveled to Baghdad, Iraq for a surprise visit in November 2003.

But whether or not Air Force One has had to use the feature shouldn’t be a determining factor. The capability exists specifically in order to make sure the president and his closest advisors do not have to set foot on the ground and expose themselves to a host of potential dangers during a major crisis.

Mid-air refueling is essential for the aircraft to be able to play its part in the “continuity of government” mission – which you can read about in depth here – and operate in the most demanding situations, including a nuclear apocalypse. That no president has had to use it would be something to be thankful for, not an excuse to get rid of it.

Without an integral aerial refueling system, the president would have to rely on another aircraft, most likely the E-4B Nightwatch airborne command post or a future replacement for it, during an actual emergency. In turn, this would mean that one of these aircraft would have to shadow Air Force One at all times, not just on long-distance trips, or risk having to rendezvous with the president on the ground somewhere, the very kind of scenario the refueling system is there to prevent from ever happening in the first place.

At present, during domestic flights, the Air Force usually dispatches one of its secretive C-20C aircraft, but this small business jet sized aircraft is a poor substitute for Air Force One and wouldn't be able to provide nearly the same capabilities or protection during a major incident, such as a nuclear attack. Aerial refueling gives the president and his staff time to best assess their options. Without it, despite the fact that the 747-8i, with its engines, offers more than 3 hours of additional flight time, the crew would be on a very fixed timetable to figure things out.

One also wonders how much the Air Force could really hope to save by omitting this well-established technology. Part of the service’s decision to stick with Boeing and its 747 platform, even as major airlines are increasingly ditching it in favor of more cost-effective aircraft, was that the company was already intimately aware of Air Force One’s highly classified requirements and this existing knowledge relative to the 747 design would save the taxpayer money.

On top of gutting the mid-air refueling components, Air Force spokesperson Stefanek told Defense One that the new Air Force Ones would use a commercial grade environmental climate control system and that there had been other modifications to reduce each aircraft’s power requirements.

The service’s decision to use an off-the-shelf environmental control system, which would include air filtration and recycling components, for Air Force One seems like it could only carry additional risks. It is reasonable to assume that the present VC-25As have a system purpose built to keep out a range of hazards including chemical and biological agents and nuclear fallout. We can only wonder what else has been left out in order to cut the plane’s power generation needs.

When Trump initially took aim at Air Force One's costs in December 2016, Tyler Rogoway wrote succinctly about the mountain of indispensable requirements and just what was at stake when considering changes to the future presidential aircraft:

Pressed into Air Force service, these new aircraft will require a massive amount of systems integration work to be able to handle the job of Air Force One. This includes adapting them to host the most advanced flying communications suite there is, and making them hardened against the electromagnetic pulses given off by exploding nuclear weapons. It will also include building in and testing aerial refueling capabilities, lots of power generation, and integrating a self defense suite made up of the most complex constellation of missile countermeasures found on any aircraft in the world. Not just that, but the aircraft will also be subject to an avalanche of specific requirements, many from emanating from disparate agencies, which will all have to be folded into a single design that will only be replicated two or three times. Finally, the design has to take future expansion and upgradability into account at every turn—an expensive task upfront aimed at saving money down the road.

In other words, this is tough and expensive work that has America’s national security relying on it. If Air Force One cannot act as a reliable flying command center, even during a nuclear exchange, the credibility of America’s nuclear deterrent erodes.

It also seems worth asking how much the Air Force will ultimately save given the amount of manhours it is apparently expending trying to cut the littlest corners to find that magic $1 billion in savings. Stefanek told Defense One the service is even trying to find cut rate deals on seats and other rudimentary fittings to trim costs. This will be time spent haggling over things that cost tens of thousands of dollars, not hundreds of thousands, let alone millions.

Whether the goal itself is worth the effort is debatable from a practical point of view. There’s no real suggestion that Air Force One’s costs were seriously “out of control” as Trump had suggested, especially compared to other ongoing projects, even if there is always a very real possibility for feature creep in defense programs. Shaving a quarter of the cost of the planes might sound nice in general, but it’s a drop in the bucket compared to the Pentagon’s overall budget, which the Trump Administration insists it wants to increase dramatically anyways.

In addition to being a relatively small portion of overall defense spending, Air Force One isn’t one of those things you want to cut just for the sake of cutting, either. If there are reasonable things to eliminate, then by all means they should go. The aerial refueling capability and environmental safety features are hardly superfluous, though.

More to the point, adhering to an arbitrary number for purely political reasons, which seems from all accounts to be the real compelling issue for the Air Force here, should never be the motivation when making decisions that could put the president and his successors, who will likely be flying in the new Air Force Ones for decades to come, at unnecessary risk.