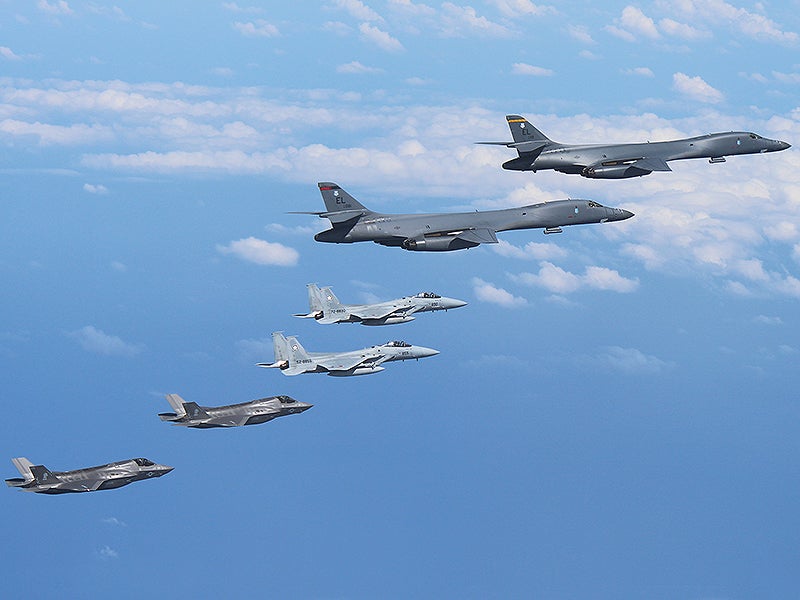 For the first time ever, U.S. Marine Corps F-35B Joint Strike Fighters the service had forward deployed in Japan flew with U.S. Air Force B-1 bombers and Japanese and South Korean F-15s fighters in a show of force. The demonstration, which came after North Korea fired a missile over Japan, seems almost guaranteed to prompt a response from the reclusive Communist regime, but it might not be one the three allies would prefer.

The mission, which lasted approximately 10 hours in total, occurred on Aug. 30, 2017. Two B-1 bombers from Andersen Air Force Base in Guam flew north where they linked up four Marine Corps F-35Bs and a pair of F-15Js from the Japanese Air Self Defense Force. Japan’s fighter jets returned to base as the American planes then turned toward the Korean Peninsula, where they joined four Republic of Korea Air Force F-15Ks. The U.S. and South Korean jets then proceeded to drop bombs over the Pil-sung training range before heading for home.

"North Korea's actions are a threat to our allies, partners and homeland, and their destabilizing actions will be met accordingly,” U.S. Air Force General Terrence J. O’Shaughnessy, head of the service’s top command in the Pacific, said in a statement. “This complex mission clearly demonstrates our solidarity with our allies and underscores the broadening cooperation to defend against this common regional threat.”

Aerial demonstrations of force after North Korean missile launches have been a common occurrence for years, with B-1s flying from Guam long being an important component, often flying the missions with other U.S. and allied aircraft or even by themselves. Before this combined flight, the South Korean Air Force itself had already sent its F-15Ks to drop bombs out on the Pil-sung range in a somewhat dubious display of "overwhelming force."

But the addition of the F-35Bs to the mix is a significant change. Though much of North Korea's arsenal is aging, but it’s densely packed in very rugged terrain, meaning it could still pose a significant threat to non-stealthy aircraft in the opening phases of any conflict on the Korean Peninsula.

There is also evidence that Pyongyang is looking at improving their air defenses, as well. In May 2017, they demonstrated the KN-06 surface-to-air missile, an apparent copy of the Chinese HQ-9, itself a clone of the Russian S-300.

F-35s have already taken part in other exercises in and around Japan and South Korea, though these have not been directly in response to North Korean actions. Japan is also a part of the of the Joint Strike Fighter program, and Mitsubishi Heavy Industries unveiled the first F-35A it assembled in the country in June 2017. The Japanese Air Self Defense Force expects to receive a total of 42 of the aircraft.

Low observable aircraft would be essential in the open stages of any large-scale strike on North Korea, as the War Zone’s Tyler Rogoway explained in detail earlier in August 2017, noting:

Finally, the B-1B is not going to gallantly waltz into North Korea and hit a series of targets around the country as part of a targeted preemptive strike against Pyongyang's nuclear and missile programs. And it definitely is not going to lead off a protracted air war over the country either. At best it would launch a series of cruise missiles from outside North Korean borders against lightly fortified targets, that is until corridors through North Korea's air defenses have been opened up, or it would attack artillery positions along the DMZ. North Korea's air defenses may not be advanced, although that too is changing to some degree, but they are dense and some of their systems are of the unpredictable road-mobile variety.

Even with electronic warfare support and its low-altitude penetration capabilities, the B-1 is still vulnerable. Stealthy or expendable assets, such as the B-2, F-22 and cruise missiles, would initiate strikes, followed eventually by F-16CJs Wild Weasels and strike fighters to begin wiping up non-fixed surface-to-air missile and other integrated air defense system targets. All this will be supported by the full array of America's space-based surveillance and cyber warfare capabilities.

However, during this particular mission, the F-35s carried radar reflectors, which would make them visible to even civilian air traffic controllers, no doubt primarily to make sure the flight was as safe as possible. It also means that the North Koreans wouldn’t have been able to get a good sense of the aircraft’s actual radar signature. As we’ve noted in the past about other exercises involving the Joint Strike Fighter, there is the possibility that the Joint Strike Fighters may have been gathering useful intelligence on North Korea’s defenses themselves with their own extensive sensor suite.

Still, though clearly intended to send a message to North Korea and its premier Kim Jong-un, the structure of the actual exercise seemed more focused on reassuring Japan and South Korea of America’s commitments to their security than on intimidating anyone. Though impressive looking for the camera, the large, tight formation flying is hardly what one would expect to see during any actual strikes on North Korean targets.

The B-1s and South Korean F-15Ks only dropped dumb bombs over Pil-sung – which translates to “Sure Victory” by the way – rather than any of the guided or stand-off weapons that either of the aircraft can carry. The Marine F-35Bs did drop 1,000lb GPS-guided Joint Direct Attack Munitions practice bombs, the largest weapon the B models can carry.

The mission, which fits perfectly with long-standing North Korean propaganda that the United States and its “puppet” allies are actively preparing an attack, will almost assuredly provoke a reaction from Kim Jong-un, but it seems unlikely that it will be conciliatory in nature. North Korea already said it only shot the Hwasong-12 intermediate range ballistic missile past the Japanese home islands in response to the annual U.S.-South Korean Ulchi-Freedom Guardian military drills.

Mixed messaging from the Trump Administration and President Donald Trump himself can only make it more difficult for these shows of force to convey whatever the Pentagon truly wants to signal. Despite weeks of U.S. officials stressing that diplomacy was their preferred solution to the growing tensions on the Korean Peninsula, Trump took to Twitter on Aug. 30, 2017 to declare that “talking is not the answer!”

It's one thing when the President and the military appear to disagree and another entirely when the military itself seems to be contradicting itself over the situation, which seems to have been the case in recent weeks, adding to the potential confusion. Ahead of this year’s Ulchi-Freedom Guardian exercise, many observers noted that the drills looked set to be significantly muted, possibly with an eye toward downplaying tensions and encouraging the regime in Pyongyang to similar show restraint.

Secretary of Defense James Mattis insisted this wasn't the case when talking to reporters on Aug. 21, 2017. “The numbers are by design to achieve the exercise objectives,” he said. “You know, the exercise is set up months in advance.”

Afterwards, though, the U.S. military went on the record to say that it had deliberately decided not to send any B-1s to take part in Ulchi-Freedom Guardian specifically hoping to generate some good will with the North Koreans. The only problem is that there were no public statements about these changes ahead of the start of Ulchi-Freedom Guardian that we can discern.

“The U.S. did not dispatch bombers during the recently concluded exercise in hopes that the reduced scale would send a positive signal to North Korea and the region,” U.S. Army General Vincent K. Brooks, head of U.S. Forces Korea and head of the U.S. South Korean Combined Forces Command, said in a notice his command released on Aug. 31, 2017. “Instead, North Korea responded to the gesture with rehearsals of special operations raids against South Korean islands, three short range missile firings, and one intermediate range ballistic missile that overflew Japan and landed in the Pacific Ocean. Apparently the changes in the exercise did not matter.”

It not difficult to understand how North Korea could have missed this “gesture,” especially when American officials were otherwise downplaying the change. On top of that, B-1 bombers had been making repeated flights to the Peninsula earlier in August 2017 as part of other routine training missions and earlier other shows of force, so their absence from Ulchi-Freedom Guardian may not have been as obvious as General Brooks and others may have hoped.

We don’t know how North Korea will respond to the message of this new, major show of force, but it’s hard to believe they’ll let it go unchallenged. On Aug. 29, 2017, North Korean state media described its provocative missile launch past Japan as a “meaningful prelude” to containing the U.S. military forces on the island of Guam. They had previously threatened to launch their own show of force near the American territory with multiple IRBMs, but then decided to take a “wait and see” approach.

Now we’re all waiting to see what message actually got across to the North Koreans and what their response will be in return.