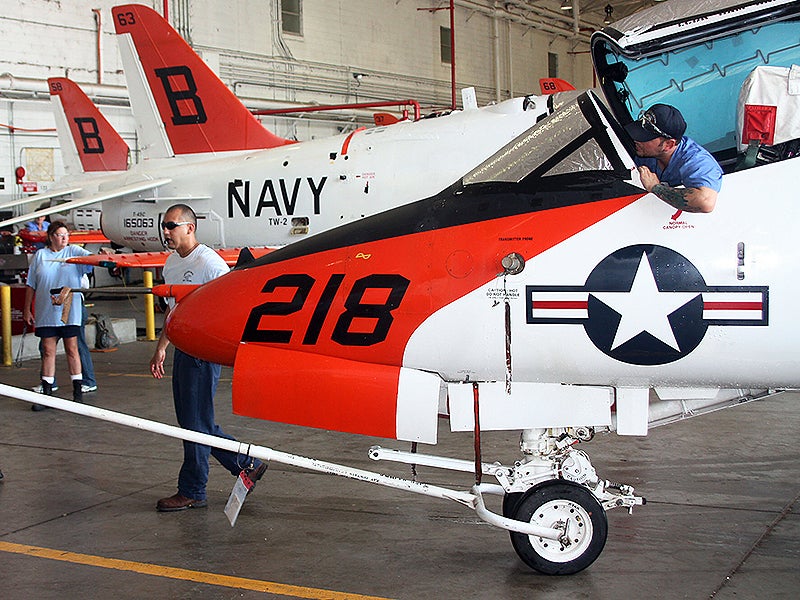 It has been a tough year for the U.S. Navy's flight training community. The T-45 Goshawk fleet is still largely grounded due to repeated physiological incidents experienced by its pilots—a reality that has plugged up the Navy and Marine Corps flight training pipeline and has drastically slowed production of fresh Naval Aviators for the fleet. Now Hurricane Harvey, which has become a slow moving class two hurricane, is bearing down on the Gulf Coast in Texas with two of the Navy's master training bases directly in its crosshairs.

NAS Corpus Christi, where throngs of T-6, T-44, and TC-12 trainers are based, sits right on Corpus Christi Bay and at this point looks to be directly in the storm's path of destruction. Harvey is predicted to strengthen to a category three hurricane by the time it makes landfall at around 10pm local time Friday evening.

Even though it could pack winds as high as 125mph, at this point storm surge and rain—nearly 35 inches of it— are the biggest threats. A wall of water as high as 12 feet is forecasted to inundate the area and NAS Corpus Christi is at an elevation of just 12 feet MSL.

About 35 miles southwest of NAS Corpus Christi is NAS Kingsville, which houses roughly half of the Navy's 200 troubled T-45 Goshawk trainers. Although NAS Kingsville sits inland, it is still near a tributary of Baffin Bay. Regardless of its proximity to a major body of water, the winds and sheets of rainfall could be very destructive.

What's most troubling is that there is no prevailing weather pattern that will predictably push the hurricane one direction or another once it hits landfall, meaning it could hang around for a long time and even double back out to towards the Gulf of Mexico. Other meteorological models have it heading toward Houston and up into eastern Texas. The lack of predictability means huge swathes of Texas are on alert and could be dramatically affected by the storm on a relatively short notice. If it were to head back toward Corpus Christi, rainfall over the coming days could total 53 inches.

Just 28 of NAS Kingsville's inventory of 99 T-45s have been evacuated, with all those jets going to NAS Fort Worth. The majority of the base's aircraft, many of which are not flight worthy, will ride out the storm in hangars. Currently, T-45 flights are limited to instructor pilots only and even they can't climb above 10,000 feet in the jet.

NAS Corpus Christi, whose aircraft don't suffer from the T-45's grounding orders and flight restrictions, have also sent all their flyable aircraft to NAS Fort Worth. The rest of its aircraft will be stuffed in hangars in hopes of riding out the brunt of the storm. Non-essential personnel from both bases are also being relocated to NAS Fort Worth as well. Clearly it is going to be a busy and crowded weekend at the base which is located near Dallas.

We will keep you informed in the coming days as to the condition of both bases.