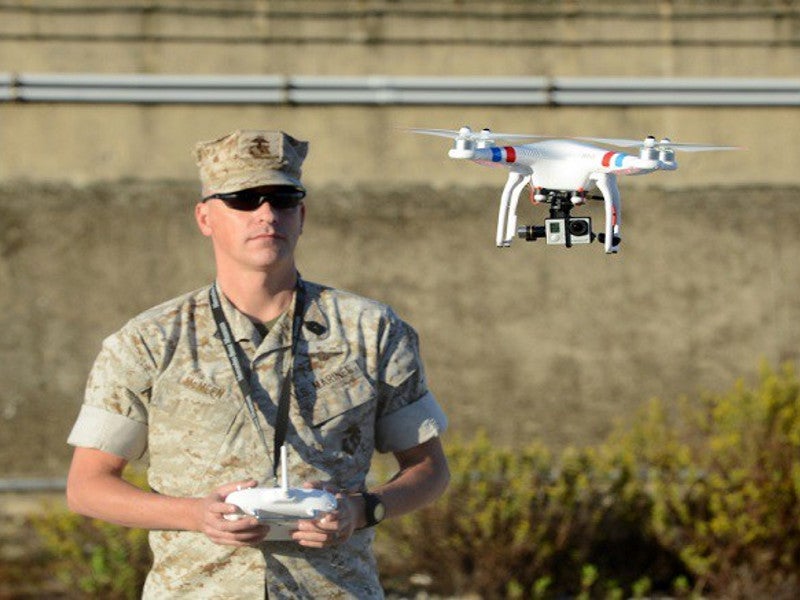 SOFWERX, a public-private technology incubator with funding from U.S. Special Operations Command, is gearing up to kick off a series of unorthodox events to gather information and data about new developments in the world of small drones that will wrap up with an apparent drone demolition derby. The goal is to explore systems and equipment that could be a benefit to U.S. military operations, but looking at the participants, it also seems like an opportunity to highlight the growing threat of tiny unmanned aircraft to American troops.

According to its website, SOFWERX – a techy contraction of Special Operations Forces Works – plans to run four main ThunderDrone events, starting with a technology expo in September 2017, along with three “senior leader reviews” to update SOCOM’s leadership. The main focus areas are broad, including technology related to unmanned aircraft that can operate anywhere – including in space – drone swarms, and weapons and other payloads, as well as associated rapid prototyping and 3D printing capabilities.

The organization will host all of this in a 7,000 square foot warehouse it rented in Tampa, Florida, which is also where its main office is located. The project will end with the battle royale style “Prototype Rodeo” in November 2017. “Are you ready to rumble?” the ThunderDrone page asks.

Though first announced earlier in August 2017, the plan didn’t get much attention until Secretary of the U.S. Air Force Heather Wilson mentioned it while visiting Holloman Air Force Base for her service’s ongoing light attack aircraft experiment. SOFWERX’ website did not specifically mention the Air Force would be involved at all.

Here is a video of a separate experiment by the Defense Advanced Research Projects Agency (DARPA) that could be similar to what SOFWERX has planned for ThunderDrone.

“In two months, we’re going to have a big competition. They’ve rented out a big warehouse,” she said in a speech on Aug. 16, 2017. “It’s a rapid prototyping event, and basically it’s to investigate swarms and platforms and effects and data science of small unmanned aerial vehicles. There’s even one [event] that says, ‘Ok, bring your stuff, we’ll see who the last drone standing is.’”

The name “ThunderDrone” itself seems to be a play on this final showdown. In the 1985 movie Mad Max: Beyond Thunderdome, Mel Gibson’s titular character has to fight for his life in the Thunderdome, a post-apocalyptic battle arena run by Tina Turner’s Aunty Entity. They've got an amazing logo, too, featuring a cross between a skull and quad-copter with a Ka-bar combat knife in its mouth.

And in keeping with this theme, SOFWERX has encouraged companies large and small, as well as academics and students, to sign up if they think they have something to offer. Single individuals have even received invitations to be pilots in the “ThunderDrone Squadron” after submitting their applications.

published a brief interview with local “droneographer” and artist Nicole Abbett, who runs a company called From Where I Fly and had signed up to pilot craft for the event. They asked her if she had any reservations about working with the military and possibility helping develop armed drones.

"Of course not," she told them. "My dad is a Vietnam vet who earned two Purple Heart medals."

But Abbett and her fellow pilots might end up demonstrating the danger small drones increasingly pose to American troops and their allies in warzones around the world or ways to defeat that threat. One of the participants, the Florida-headquarterd Explotrain, LLC, specializes in simulating improvised explosive devices for training exercises.

The company says its Explodrone is the “first and only” simulator mimicking armed hobbyist quad- and hex-copters, such as the ones ISIS have increasingly used to attack security forces in Iraq and Syria.  The firm’s website specifically cites the terrorist group’s development of this tactic as an example of the emerging dangers.

The threat is real, as we at The War Zone have noted many times, and ThunderDrone seems like a perfect place to run through very possible scenarios. Earlier in August 2017, Tyler Rogoway wrote this as part of a larger discussion about the U.S. military’s need for new short-range air defenses:

Although it may sound like a page out a science fiction novel, the only thing that could probably counter such a dense swarming attack on ground forces or a garrisoned force would be for those forces to have their own counter-swarm swarms at the ready. This would result in dozens or even hundreds of mini kamikaze dogfights in the sky—a life and death suicide struggle among diminutive hive-minded flying robots.

It's entirely possible that SOFWERX’s rodeo could include something exactly like this, with pilots trying to knock each others' small drones out of the air. Other countermeasures, including jammers, could be a factor, too. The ThunderDrone project seems intent on letting participants make the case for their technology and then force them to prove it works.

The freeform nature of the whole event is in keeping with the basic ideas behind SOFWERX, which clearly has its marching orders from the U.S. military, but operates like a hipster tech startup. The “front office” space it occupies in Tampa was previously a tattoo parlor, while the back of the stylish brick building is a former telephone book factory.

SOFWERX opened its doors in 2016 with a $2 million in funding, according to a profile by The Washington Post. Day-to-day operations are organized by The Doolittle Institute, a Florida-based non-profit that had worked in the past to connect leaders in various technological fields with elements of the U.S. military.

It’s named after U.S. Army Air Forces Lieutenant Colonel James “Jimmy” Doolittle, who led the legendary aerial raid on the Japanese capital Tokyo in the immediate aftermath of the Pearl Harbor attack. After World War II, he became an advocate for advancements in aviation and space technology, serving for a time as the chairman of the National Advisory Committee for Aeronautics (NACA), the predecessor to the National Aeronautics and Space Administration (NASA).

The Pentagon, especially under former Secretary of Defense Ashton Carter and former Deputy Secretary of Defense Robert Work, made engagement with private technology firms a key part of the so-called “Third Offset” strategy, which focuses on equipment and operating concepts that will help persevere America’s military dominance even as its overall size shrinks. This most notably led to the creation of the Defense Innovation Unit Experimental, or DIUx, with offices in technology hubs such as Silicon Valley and Boston.

Unmanned aircraft have been a huge component of the Third Offset, including swarms of small drones and tiny craft that can be operated easily by a single individual. In May 2017, James “Hondo” Geurts, SOCOM’s top acquisition executive, announced a plan to establish another organization similar to SOFWERX, called DRONEWERX, in collaboration with the Pentagon’s secretive Strategic Capabilities Office (SCO).

SCO has been a major driver of Third Offset technologies and organized an air-deployed drone swarm demonstration in October 2016. In that experiment, U.S. Navy F/A-18 Hornet fighter jets dropped more than 100 Perdix mini-drones over the China Lake test range in California, which then performed various tasks as a single entity.

This desire for advanced drone technology for a wide variety of uses, and more of it, as well as drone defenses, especially ones made in America, is only likely to increase for the foreseeable future. Unmanned aircraft are only becoming more ubiquitous in general.

In addition to participating in ThunderDrone, the U.S. Air Force is also sponsoring the Drone Racing League, a startup that is producing slick neon-lighted quad-copter races broadcast in ESPN as an analogue to car racing events such as NASCAR – something I've actually managed to find myself watching at a bar. The hope is that it will promote interest in both drone technology and the service.

“We’re the exclusive sponsor in the finals as it goes through, and we’re looking for a venue where we can host a race on an Air Force facility,” U.S. Air Force General James “Mike” Holmes, head of Air Combat Command, told National Defense. “They’re looking for venues that are colorful and attractive on television – we’ve got some of those.”

This will in turn expose all new vulnerabilities, which the U.S. military needs to address, including some factors that may not have necessarily been immediately apparent. Earlier in August 2017, Defense One reported that the U.S. Army had banned its personnel from using commercial unnamed aircraft and associated software from Chinese firm DJI, citing concerns that it could open its personnel up to cyber attacks or data breaches, as well as possibly just sending sensitive video or other information straight back to the company’s headquarters.

“There is no doubt in my mind that DIUx will not only continue to exist, it will actually – it will grow in its influence and its impact on the Department of Defense,” Secretary of Defense James Mattis said during a visit to the unit's offices in Mountain View, California. “One of the ways you make certain that you don't have bad processes eat up good peoples' ideas is you make certain that you remove the bad processes and organize for success.”

SOFWERX’s ThunderDrone project could be a good opportunity to see if this new way of doing business has potential. If nothing else, we're looking forward to official video of the drone rodeo.