Images seem to pointedly show that US pressure and threats haven't curtailed the country's ominous developments. 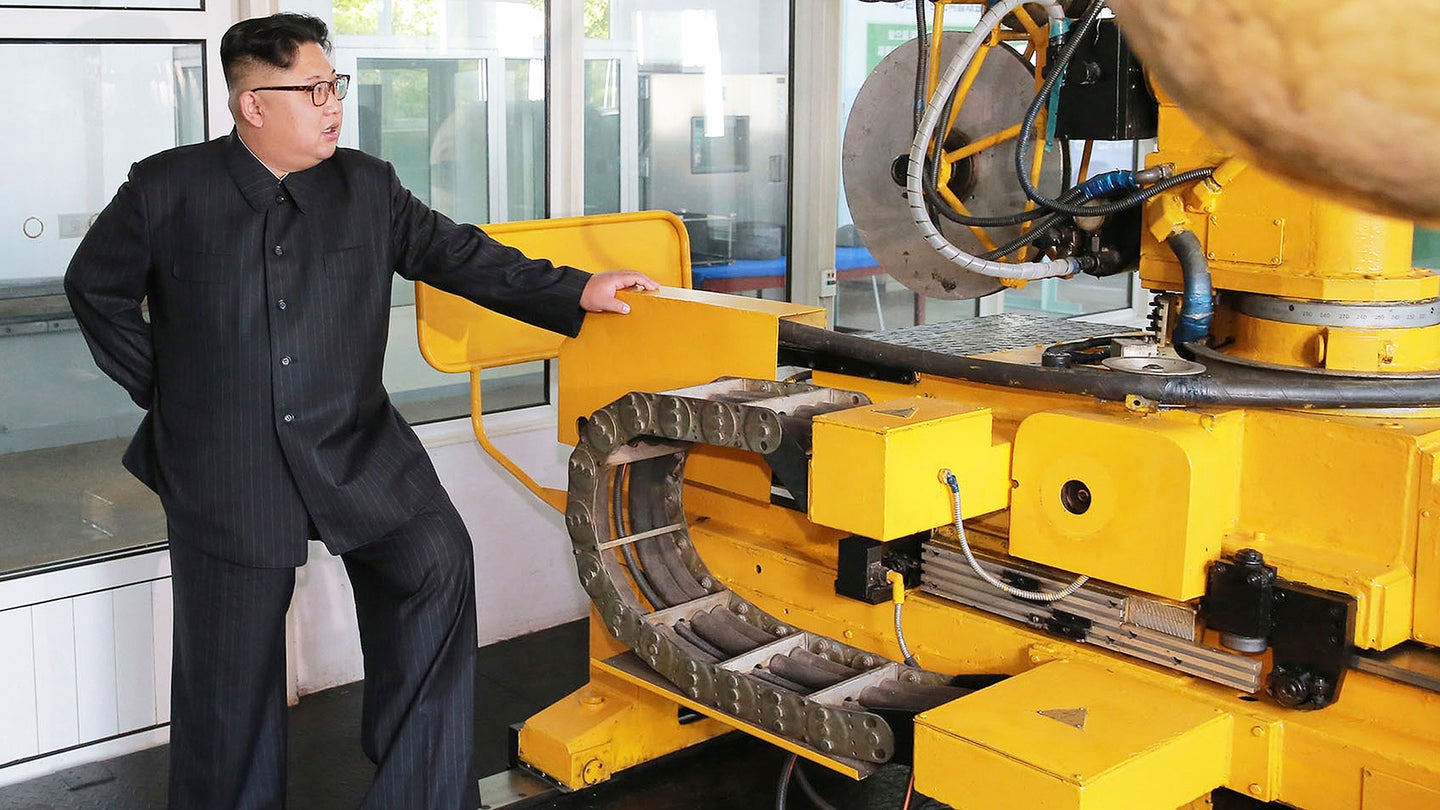 North Korea has released pictures that appear to reveal is has either completed or is in the process of developing even more significant ballistic missile designs that use solid fuel rocket motors. Though the two events do not appear to be directly related, the reclusive regime put out the images on the same day the U.S. government officials publicly insisted that sanctions and other pressure had prompted a certain amount of “restraint” on their counterparts in Pyongyang, which could call those assessments into question.

On Aug. 23, 2017, the state-run Korean Central News Agency posted pictures along with details about North Korean premier Kim Jong-un’s visit to the Chemical Material Institute of Academy of Defense Science, which is important component of the country’s ballistic missile projects. Official photographers captured the young leader chatting with officials in front of various displays and machinery, as well as receiving the adulation of the plant’s employees.

Of all the images, two stood out most to experts, who immediately highlighted their significant on social media. One showed Kim in a room with two posters depicting heretofore unknown ballistic missiles types, the Hwasong-13 and Pukguksong-3, while another had him walking past what looked to be a wound filament solid fuel rocket fuel motor.

Based on North Korea’s established naming conventions, the Hwasong-13 should be a liquid-fueled design, while the Pukguksong-3 would use a solid fuel rocket engine. However, the associated displays suggested that both weapons could be solid-fueled. Along with the wound filament motor, the new designs are especially concerning.

The existing members of the Pukguksong family are the Pukguksong-1 submarine-launched ballistic missile, also known as the KN-11, and the land-mobile Pukguksong-2, or KN-15, a two-stage derivative of the earlier design that troops can fire from a tracked transporter-erector-launcher. North Korea first demonstrated the KN-11 in 2016 and the KN-15 in February 2017.

The important difference between these weapons and many of North Korea’s other ballistic missiles, including the Hwasong-14 intercontinental ballistic missile (ICBM), is their solid fuel propellant. This means troops have to spend far less time preparing them to fire.

Combined with a mobile launcher, this could make it harder for the country’s enemies, such as the United States, to detect and track the movement of the missiles prior to launch. Solid fuel motors are also essentially a perquisite for a robust submarine launched ballistic missile capability. The tight confines of a submarine do not lend themselves to storing and pumping liquid rocket fuel into missiles and it would be an especially risky proposition in general given the volatile and corrosive nature of the propellant.

This would likely have informed the development of the Pukguksong-1 in the first place. And with even a small fleet of small submarines carrying nuclear-armed solid fuel missiles, the North Korean regime would have a credible second-strike option in the event of any pre-emptive attack on its land-based missile infrastructure. By firing ballistic missiles off shore, North Korea can also defeat the THAAD anti-ballistic missile system's engagement envelope.

So far, however, both Pukguksong-1 and -2 have demonstrated relatively limited range compared to the Hwasong-14 ICBM and the Hwasong-12 intermediate range ballistic missile (IRBM), the latter of which North Korea has threatened to test fire near Guam. Both weapons have enough fuel to travel estimated distances of less than 1,000 miles based on existing observations about North Korean tests, though we may not have seen them fly with full fuel loads. This would still put all of South Korea and much of Japan well within range.

This is where the picture of the wound filament motor comes in. This technology is essential to producing longer-range solid fuel ballistic missiles. The casing is lighter than traditional metal shells, but still strong enough to withstand similar forces. Simply by inserting one of these new lightweight motors, the rocket’s power remains the same, but it doesn’t have to lift as much weight, translating to a longer overall range. On top of that, North Korea’s weaponeers could fill the newly freed “throw weight” with more fuel, additional missile sections, or extra payloads, which could result in even longer-range missiles with deadlier warheads.

Michael Duitsman, a research associate at the Monterey Institute of International Studies' James Martin Center for Nonproliferation Studies, told CNN that when the U.S. Navy switched to wound filament engines for their submarine-launched weapons in the 1960s, they immediately gained 50 percent more range. He noted that this was also because the service loaded its new casings with a more powerful propellant.

The other poster, showing off the Hwasong-13, is ominous in its own right, showing a three-stage missile. Based on its numbering, this could easily be a missing link between the Hwasong-12 and Hwasong-14 and represent a second workable North Korean ICBM design. On July 4, 2017, North Korea first launched the Hwasong-14, which experts have come to believe has the ability to carry a nuclear warhead deep into the continental United States.

If it does feature solid-fuel motors in wound casings, the Hwasong-13 might be significantly more dangerous. The Hwasong-14 is liquid fueled and uses a wheeled transporter-erector, which stands the missile up on a static platform for firing. A lighter weight Hwasong-13 could potentially make use of a full transporter-erector-launcher, giving North Korea its first road-mobile ICBM capability that is readily usable on relatively short notice.

Experts had already peculated that North Korea's decision to test fire a second Hwasong-14 at night was an attempt to show off their capability to launch a nuclear response at any time. During the country's annual Day of The Sun military parade, North Korean troops did display two containerized ballistic missile designs, neither of which has been on public display since.

It is not clear whether the Hwasong-13 or Pukguksong-3 missiles or the new lightweight rocket motor casing are already available or are even in active development. Still, the pictures do suggest that the North Koreans have not slowed in their pursuit of even more ballistic missile designs and other technologies to improve their capabilities.

And given how heavily North Korea manages the transmission of any information in and out of the country, it unlikely that these pictures were taken at random, though there is the possibility they could be part of an active disinformation campaign. More likely, though, they are deliberate display of the country’s continued ballistic missile work in the face of sanctions and other international pressure, including President Donald Trump’s now infamous “fire and fury” remarks earlier in August 2017.

As noted, North Korea threatened to launch a flurry of missiles near Guam over the comments, but eventually decided against it. This gave the regime in Pyongyang space to claim a moral victory for showing restraint amid the escalating rhetoric. While there was no evidence his threat had impacted their decision either way, on Twitter on Aug. 16, 2017, Trump took credit for forcing the North Koreans to make what he called “a wise and well reasoned decision” in the face of an otherwise “catastrophic and unacceptable” outcome.

The Trump Administration, however, insists that its sanctions regime and other diplomatic pressure, including on China and Russia, are producing results. On Aug. 22, 2017, the day before KCNA released the pictures, the U.S. Treasury Department announced yet another round of sanctions against 10 companies and six individuals, including Chinese and Russian entities, connected with North Korea’s ballistic missile and nuclear weapons programs. At the same time, the U.S. Justice Department announced it was working to seize approximately $11 million in assets from two of the companies, which it accused of money laundering.

“Treasury will continue to increase pressure on North Korea by targeting those who support the advancement of nuclear and ballistic missile programs, and isolating them from the American financial system,” Treasury Secretary Steven Mnuchin said in a press release.  “It is unacceptable for individuals and companies in China, Russia, and elsewhere to enable North Korea to generate income used to develop weapons of mass destruction and destabilize the region.”

Later that day, Secretary of State Rex Tillerson took time during a press conference primarily concern the Trump Administrations new Afghanistan policy to talk about the continued pressure on North Korea. He highlighted the lack of recent provocative ballistic missile tests as possible evidence authorities in Pyongyang were getting the right message and were looking to negotiate.

“I am pleased to see that the regime in Pyongyang has certainly demonstrated some level of restraint that we’ve not seen in the past,” Tillerson said. “We hope that this is the beginning of this signal that we’ve been looking for that they are ready to restrain their level of tensions, they’re ready to restrain their provocative acts, and that perhaps we are seeing our pathway to sometime in the near future having some dialogue.”

Still, it has always been hard to imagine that North Korean regime would negotiate away the weapons it repeatedly describes as fundamental to its security. And while Tillerson and others are right to point out Kim Jong-un’s recent restrained actions, the Trump administration's demand for the total nuclear and missile disarmament of North Korea remains almost certainly a non-starter when it comes to any chances of a successful negotiation.

Whatever the case, North Korea clearly wants the United States and everyone else to know that it has not stopped its ballistic missile development work and that it is actively pursuing new technology that would make its weapons even more credible threats both in East Asia and beyond.