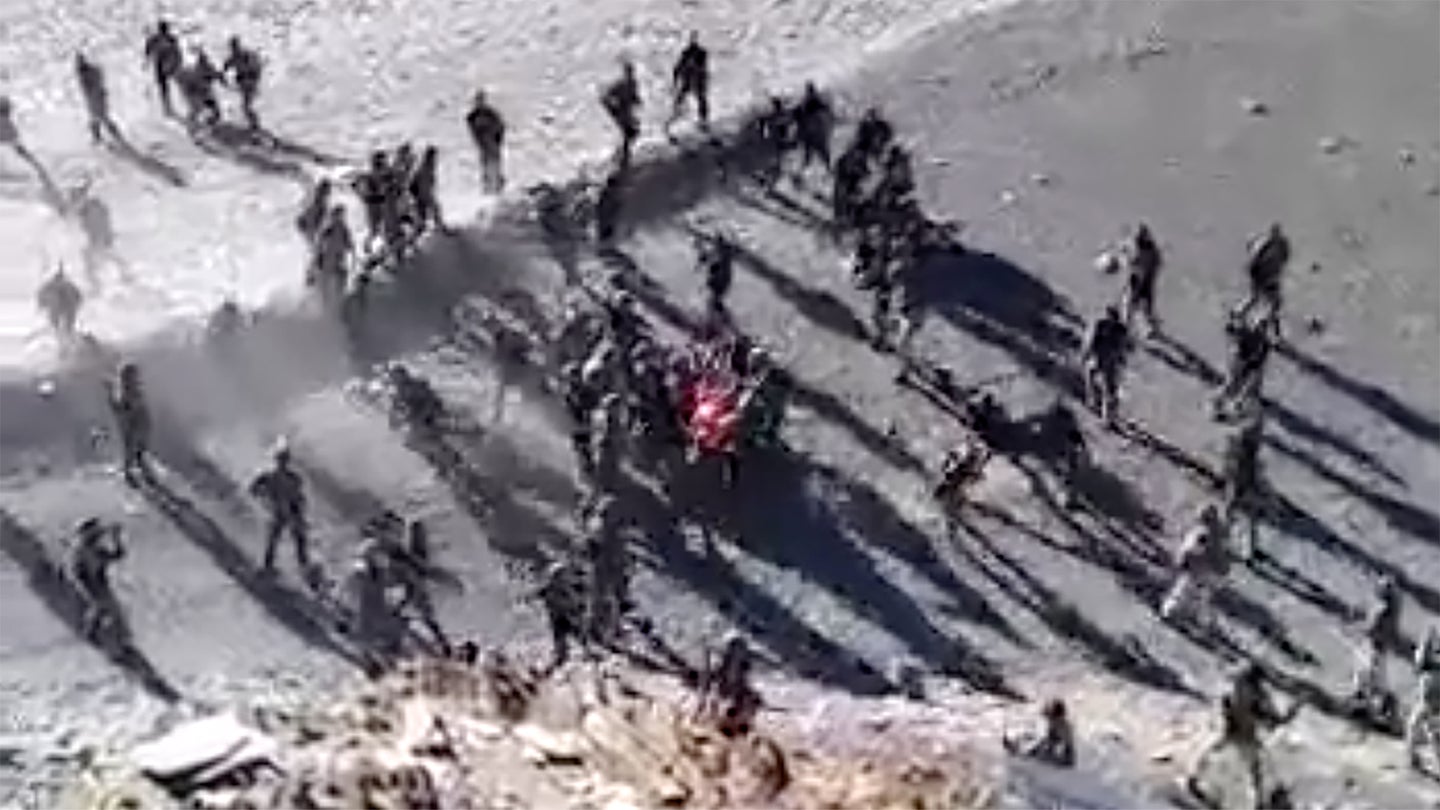 The fallout from a brawl on the shores of Pangong Tso, a lake along the border between China’s Tibet autonomous region and India’s Ladakh province, has threatened to add a new dimension to a weeks-long stand-off between the two countries over a portion of territory further east known as the Dolam Plateau, or Doklam or Doka La. Though Indian and Chinese authorities have disputed the boundaries for decades, the latest tensions are especially serious and have prompted concerns about the potential for more serious skirmishes.

The latest incident occurred on Aug. 15, 2017, when Chinese and Indian troops physically attacked each other with poles and rocks near Pangong Tso, which sits along the so-called Line of Actual Control, or LAC, the de facto border as pending a final, negotiated settlement. No one was serious injured, but both sides blamed the other for serious violations of the established quo, with China’s Foreign Ministry making an especially terse statement nearly a week later.

Members of the People’s Liberation Army (PLA) were conducting “normal” patrols of the Chinese side of the LAC along Pangong Tso when “they were obstructed by Indian border forces,” Chinese Foreign Ministry spokeswoman Hua Chunyin said at a press conference on Aug. 21, 2017. “The Indian side took fierce actions, colliding with the Chinese personnel and having contact with their bodies, injuring the Chinese border personnel.”

An Indian source told Reuters that Indian troops had actually blocked an attempted incursion into Ladakh along the lake. This then devolved into the scuffle when the Chinese troops refused to depart.

Hua seemed to categorically dismiss any assertion that China had sent its forces beyond the status quo boundaries, calling on India to make sure its border troops followed the spirit of existing border agreements. She added that “China is extremely dissatisfied and had lodged solemn representations,” according to Chinese state media outlet Xinhua.

As noted, this is not the first time the two countries have clashed along Pangong Tso, nor is it the only time a skirmish has erupted between China and India in Ladakh, despite a number of agreements, including a protocol outlining specific confidence-building measures in 2005. In 2013 and in 2014, there were stand-offs over various military construction projects in the Depsang Plains area in the northern portion of the province. In 2016, Chinese attempts to expand a canal near Demchok further south.

The lack of a final agreement on the boundaries, which have been at issue since the end of the Sino-Indian War in 1962, means that accusations of provocations, outright incursions, and physical scuffles are hardly uncommon. India and China cite a host of historical claims, colonial-era agreements, and the long-established status quo to defend their rhetorical positions.

What makes this latest situation more worrisome is that it seems to build off a separate stand-off over the status of the Dolam Plateau, which sits in the middle of the tri-border area between China, India, and small Kingdom of Bhutan. Though control of this area too has long been in dispute, the nature of the latest incursion appears more significant and serious than those in the past.

This altercation began on June 16, 2017, when Indian troops situated in Bhutan as part of a collective security agreement between those countries, crossed over the LAC into Chinese controlled territory to prevent PLA engineers from extending a road toward the Bhutanese border. Neither India nor China seems to dispute that the construction was fully within the Chinese side of the boundary, but Indian officials seem to have acted preemptively out of concern that the new roadway could pose a real threat to their own claims on the region.

This has created a complex political and diplomatic conundrum, with Indian and Chinese authorities effectively arguing cross-purposes, both unwilling to give any rhetorical ground. It’s hard to suggest that India has not violated China’s sovereignty and the spirit of the 2004 confidence-building measures, as well as other existing agreements on the status quo of the two countries shared borders. However, India says the real issue that China, rather than negotiating in good faith, is actually stalling any attempts a final settlement while it seizes control of more territory.

The strategic importance of the otherwise obscure region cannot be overstated. The Indian government sees a direct threat to its security from any Chinese moves to gain greater control over the Dolam Plateau. The mountainous area would give the PLA an advantageous position over the Siliguri Corridor, a stretch of land less than 15 miles wide between Nepal and Bangladesh that forms India’s narrowest point. In any large-scale conflict, it could easily be a chokepoint, effectively severing India’s far eastern provinces from the rest of the country.

The Chinese, understanding the importance of region, too, have vastly expanded road and rail networks on their side of the LAC since 1962. If completed, the new road would only add to the PLA’s ability to quickly move troops into the gap during a war. Private geopolitical intelligence firm Stratfor has argued that China’s existing infrastructure developments already give its military a significant advantage in any theoretical fight.

In July 2017, the PLA conducted a live-fire artillery exercise in Tibet, seen as a demonstration of its combat capabilities in the region. The month before, the Chinese military had begun testing a new light tank, optimized for operations in mountainous terrain, in the autonomous region, as well. The ZTQ tank is the successor to the Type 62, which the PLA developed in the late 1950s specifically for operations along the country's southern borders, which feature large mountain ranges, rivers and lakes, and heavily irrigated rice paddies and associated canals, all of which are generally poor terrain for heavy armored vehicles.

Thankfully, there doesn't seem to be an immediate threat of all out war. That's not to say it isn't lingering the background, though. Both India and China have been steadily reinforcing their respective positions around the Dolam Plateau clearly to be ready if the crisis escalates. The PLA has been able to make good use of their existing road and rail networks already, again reinforcing the importance of this new construction in their overall strategy in the region.

The bigger immediate concern is that the Chinese government will increasingly dispense with the status quo elsewhere along the border, using India's preemption in the Dolam Plateau as an excuse to push elsewhere and seek additional concessions. In turn, India could see this as vindicating evidence that China has never intended to actually negotiate a fair and equal border arrangement, making it even harder to deescalate the situation.

This is why the possible incursion into the Indian side of Pangong Tso, though not out of the ordinary in of itself, seems more dangerous than those in the past. China has already scrapped one annual meeting between the PLA and its Indian counterparts that was a significant component of the 2005 confidence-building deal.

The new dispute in the tri-border area also has the potential to become a multi-side conflict, with Indian troops stationed in Bhutan and the Chinese actively courting their Bhutanese counterparts with increased economic and infrastructure cooperation. Building the road toward the Bhutanese rather than Indian border appears to have been a deliberate and calculated move to try further drive a wedge between the two countries.

Earlier in August 2017, Global Times, an official newspaper of the Chinese Communist Party, ran an editorial slamming India’s treatment of its neighbors, including Bhutan, and reinforcing the potential benefits of cooperation with China. For its part, tiny Bhutan has been trying to stay neutral, but there is a question of whether this relative silence amounts to a tactic approval of China’s position.

“If you raise the Doklam issue, you will not get any response,” the personal secretary of Bhutan’s Prime Minister Tshering Tobgay reportedly told The Week’s Rabi Banerjee. “It is a calculated decision, which has come from the top. No one would speak a word.”

After more than eight weeks, neither China nor India looks inclined to concede the issue, while Bhutan appears content to try and wait out the crisis. Hopefully, all of the parties will be able to find a way to break the deadlock and find a solution to the impasse short of an actual war.