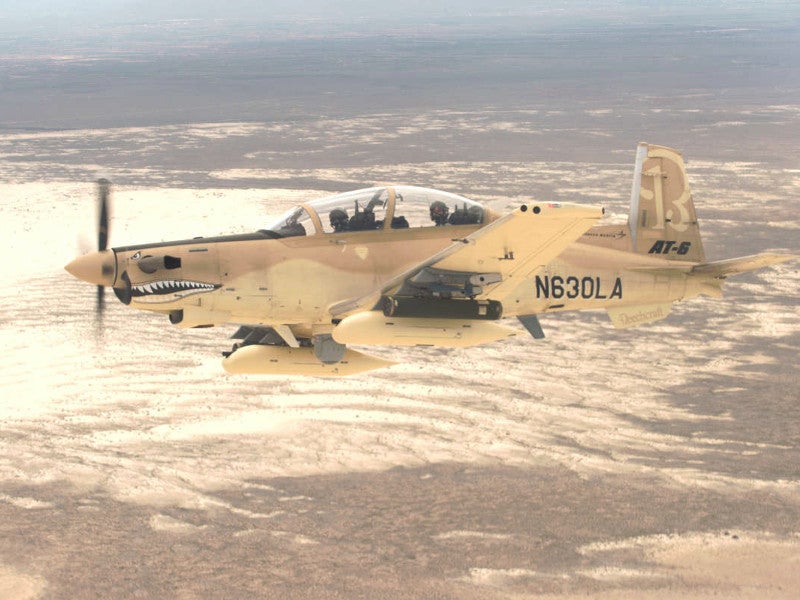 The U.S. Air Force has released the first details about the kinds of weapons, sensors, and other gear it is interested in exploring as part of a joint light attack aircraft technology project it is running with U.S. Special Operations Command (SOCOM). Though a separate and distinct effort not intended to develop an actual plane, the service had said this Light Attack Support Special Operations (LASSO) program will complement its ongoing light attack experiment, commonly known as OA-X.

The Air Force explained that any submissions should be focused on solutions that would work with light attack planes in general, but be “platform-agnostic” and able to readily work with any future aircraft design. The service made it clear that there was no plan as yet to buy any equipment based on the proposals, but it was only interested in hearing from firms “capable of providing the design, development, and demonstration” of the systems in question. “The intent is to accelerate the delivery of innovative capabilities” to special operations forces, the notice said.

But while there may not be a formal development program in place, the announcement gives a clear idea of what target sets the Air Force and SOCOM expect a light attack aircraft might be best suited for and what capabilities it would need to perform those missions most effectively. Many of the specific technologies on its wish list could have applications beyond light attack aircraft, as well, being suitable for other special operations aircraft, such as drones and fixed wing gunships.

The weapon system category includes four actual munitions requirements, as well as a desire for an advanced targeting system. This latter system should be able to receive real-time information about time-sensitive targets, which could include individual terrorists, as well as other threats, friendly forces, and basic waypoints. Though there’s no specific requirement for the system to be helmet-mounted, this configuration would make it easier for the crew to locate and designate targets, and could even conceivably incorporate an augmented setup akin to the Thales Scorpion, which projects color-coded targets and other information on a helmet-mounted display. Air Force pilots flying F-16 Viper multi-role fighter jets and A-10 Warthog ground attackers, as well as crews on the AC-130W Stinger II gunship, already use this cueing system.

Once the crew of the notional light attack aircraft marks their target, the Air Force wants them to be able to rapidly engage them in the most appropriation fashion. The command is interested in bombs and missiles with scalable effects that can attack targets, destroying them in the “first pass,” all while avoiding as much collateral damage as possible. This could be particularly useful when striking terrorists or militants in densely populated urban environments. This section also stipulates a desire to be able to get at targets above and below ground, which would include tunnels, something that has become a particular feature of the fight against ISIS in Iraq, Syria, and Afghanistan.

The Air Force wants to be able to reprogram these weapons in flight, via a secure datalink, in order to improve accuracy and provide additional data to help develop follow-on munitions designs. Though not specifically noted, this would give crews additional control after releasing a bomb or missile, allowing them to better direct it away from innocent civilians if they suddenly enter the target area or fine tune their attack if the target moves. Israel already builds a number of weapons that fit this basic description of a man-in-the-loop precision munition, including the Spike NLOS missile.

There is a desire for an air-launched, loitering munition, as well, primarily for taking out so-called “high value targets.” The goal of this particular requirement is to develop a weapon that gives U.S. commanders the most time to positively identify the individual in question while at the same time not giving them any advance notice of an impending strike. European missile consortium MBDA's now canceled

“The munition should provide the time necessary to ensure that all of the criteria are met before engaging a target,” this specific section of the announcement explains. “The weapon should have the capability to loiter for a period of time either directly over the target or at a standoff distance to prevent the weapon or host aircraft from making its presence known in the target area.”

Lastly in the weapon systems category, there is a call for designs for precision guided

muntions with stand-off range that do not require GPS to work as intended. The navigation system has become one of, if not the predominant guidance method for aerial bombs, missiles, and guided artillery projectiles within the U.S. military.

Unfortunately, as The War Zone has reported in the past, there is an increasing threat to the space-based components of the GPS network, as well as a danger of enemy forces jamming or spoofing the signals on the ground. You can read a more in depth discussion of these potential issues here.

To help the crew of any future light attack aircraft locate targets and otherwise conduct surveillance missions, the Air Force and SOCOM are interested in both a sensor pod and equipment that would fuze information from that system, as well as any other on board gear. There are not specific for the types of sensors necessary to produce this “multi-intelligence situational awareness."

However, the notice does say it wants proposals that keep size, weight, and power requirements to an absolute minimum. One specific example given is a desire for the capabilities of a 20-inch aperture electro-optical or infrared system, or an improved setup, which fits into a 15-inch package. A modular design, such as the one the Air Force is already testing, could help provide additional functionality.

The sensor fusion setup may include artificial intelligence or other machine learning capabilities in order to automate as much of the targeting process as possible and weed out bad or conflicting information. The Air Force and SOCOM say they are willing to accept submissions for systems that can either provide recommendations or simply make targeting decisions on the available information.

The two halves of the final category, mission systems, focus on advanced communications across multiple radio or other networks in the air and on the ground, as well as smaller, lighter, and less power intensive defensive systems, including both warning sensors and defensive countermeasures.

These appear to be the most mundane focus areas, with no requirements for automated functioning for either group of equipment or specific mention of advanced developments, such as laser-based communications gear or passive or active directed energy defense systems. Of course, this wouldn’t preclude any potential vendor for submitting a proposal to incorporate these types of systems, provided they were small enough to fit within the constraints of a typical light attack aircraft.

Given that the over-arching requirement is for these systems to be “platform-agnostic,” it seems possible, if not plausible, that SOCOM could be interested in integrating any successful technology to come out of the LASSO program onto a variety of aircraft. The command has already been working on standardizing the AN/APQ-187 Silent Knight terrain-following radar across the MH-47 and MH-60 special operations helicopters, CV-22 Osprey tiltrotors, and MC-130 special operations transports.

Similarly, SOCOM’s air force component, Air Force Special Operations Command (AFSOC) has been increasingly buying precision guided munitions, such as the AGM-176 Griffin missile and up-coming GBU-69/B glide bomb, which use common launchers that work with both AC-130s and MQ-9 Reaper drones. That existing universal architecture would be easily adaptable to a future light attack aircraft.

The universal nature of these systems might help them get into development and production faster, depending on how the Air Force decides to proceed with its light attack test. It might also mean that any planes the service puts into non-special operations units might get the same systems.

As it stands now, there is the potential for two of the four participants in the OA-X trials to advance to a second phase, a combat field test. It’s not clear what will happen afterwards, if and when that experimental deployment occurs.

“I can use them in combat, I think, we’ll find out,” U.S. Air Force Chief of Staff General David Goldfein recently told reporters at Holloman Air Force Base in New Mexico, which is hosting the light attack trials. “There is also the possibility that AFSOC may come forward and say they want to employ the airplane.”

With LASSO working in parallel, if the Air Force does decide to buy a light attack aircraft, there could be a lot of new tech already ready to go into the new planes.