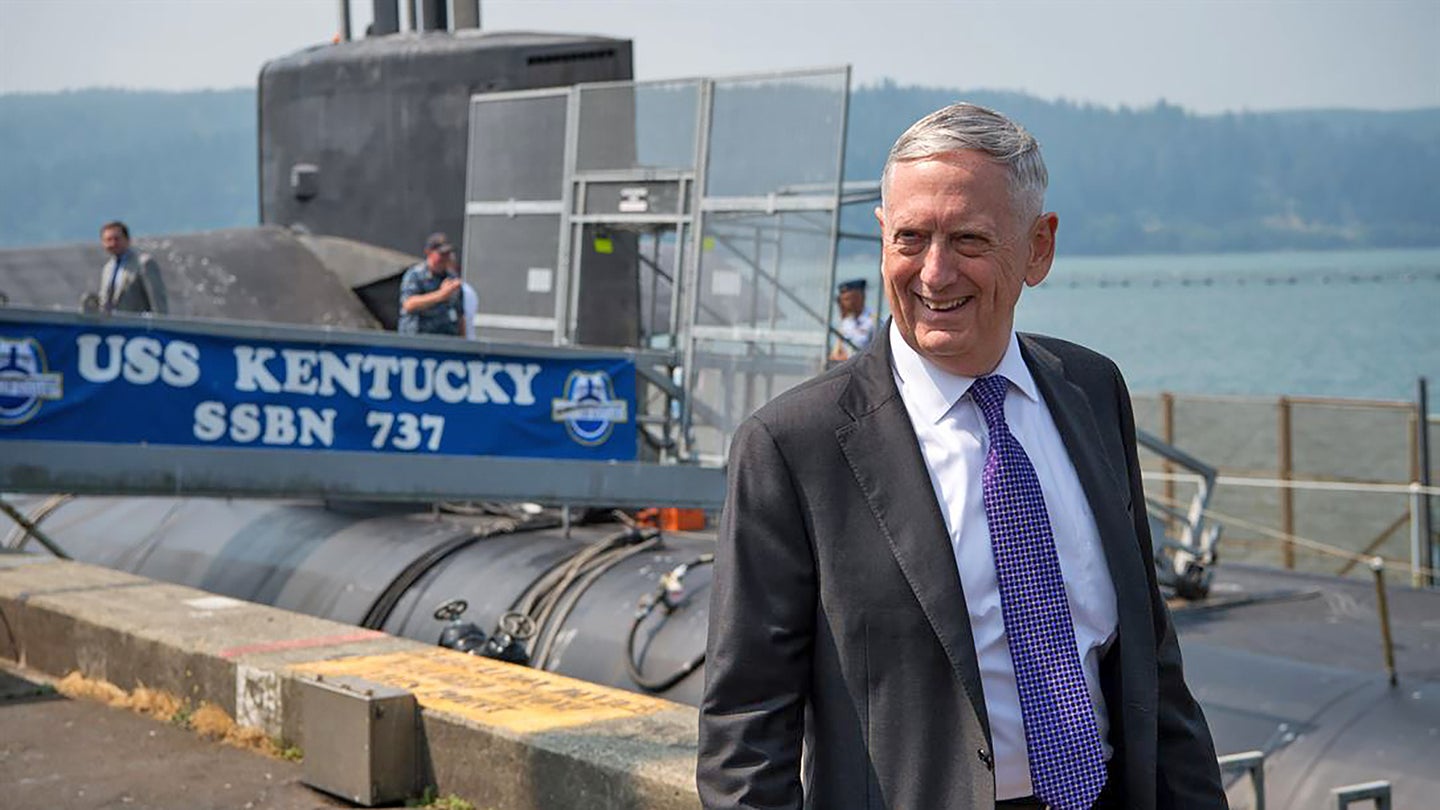 Secretary of Defense Mattis, a man who is a an endless source of great quotes, visited US Navy submariners at Naval Base Kitsap In Washington State last week. He toured the base, which is the home of America's Ohio class nuclear ballistic missile carrying submarine force on the west coast. He also met with sailors that have the tough job of not seeing the outside world for weeks, or even months at a time as they execute nuclear deterrent patrols.

Mattis is known to love, above anything else really, spending time with the troops. He is a soldier's Secretary of Defense if there ever was one. During a "colorful" encounter with sailors from the USS Kentucky (SSBN-737), he said a number of things, including telling sailors they are not "some pussy sitting on the sidelines," stating:

"You'll still miss it. You'll miss it like the dickens, and you'll be changed for the better for the rest of your life. So you'll never regret, but you will have some of the best days of your life and some of the worst days of your life in the U.S. Navy, you know what I mean? That says -- that means you're living. That means you're living. That means you're not some pussy sitting on the sidelines, you know what I mean, kind of sitting there saying, “Well, I should have done something with my life.” Because of what you're doing now, you're not going to be laying on a shrink's couch when you're 45 years old, say “What the hell did I do with my life?” Why? Because you served others; you served something bigger than you."

After his address to the sailors he took a few questions, one of which he elaborated on extensively and his answer could have huge strategic impact on the future of America's nuclear arsenal.

A review is currently underway examining America's nuclear weapons posture. It includes an evaluation of the continuing need for a nuclear triad. America's Cold War vintage nuclear posture still includes bombers, ballistic missile submarines, and ground based intercontinental ballistic missiles. It is hugely expensive to maintain and upgrade, leading to debate over the possibility of reducing the nuclear triad to a dyad, something The War Zone has advocated exploring in the past.

The exchange started when a sailor asked "do we expect to maintain all three legs of the nuclear triad, sir?" Here's Mattis's response:

"Yes, that's a great question. Now, are we going to maintain all three legs of the triad? You know you're the most survivable. So long as you can run this boat quietly, you'll stay survivable.

And then we've got the ICBMs (intercontinental ballistic missiles).

Now coming into the job I've been three years out of the Marines. I was the infantry for a long time, and I had time -- when I was living down at a university, down at Stanford University south of here, and I studied this, and I had a lot of questions.

I believe as I got done with each of the three legs, yours is sacrosanct. You and your mission, that you know, and it's because of how good you are. If we didn't have control over the Naval reactors, you didn't -- weren't able to run those right, if we had a lack of managerial integrity -- you and I call it small-unit discipline, if we didn't have that, it wouldn't be the same thing.

But I can look you in the eye and tell you, that nothing is more certain than if you have a sailor son of yours going to the Navy one day, he could very well be doing the same thing if he falls in his father's footsteps. You'll be here.

Bombers will still be here. We've got to give them some standoff capability. We got that. They'll be there.

The ICBMs, because an enemy would have to shoot so much to take them out, you know because their dug in underground, it's going to soak up a lot.

I think we're going to keep all three legs of the deterrent.

However, we've got a review going on right now. I've got the smartest people I can find. And it's Republican and Democrat. It's men and women. It's old people. It's young physicists. It's people who studied history. There are people who know what they're doing. And then I brought in a whole bunch of old Navy admirals who've gone through your program, and people like that, Air Force generals, and they're going to review what those smart people are doing. And when we get done we'll have a good posture set for us.

And it really goes back why we need you, answering the first -- the lieutenant's question.  And I think we need the other two legs.  But I've got to wait until the posture review is done.

The discussion offered an incredibly raw look at how Mattis personally views the issue—one that could result in one of the most high-stakes national security decisions of our time.

The Pentagon's Nuclear Posture Review is underway. We'll keep you updated as it unfolds.