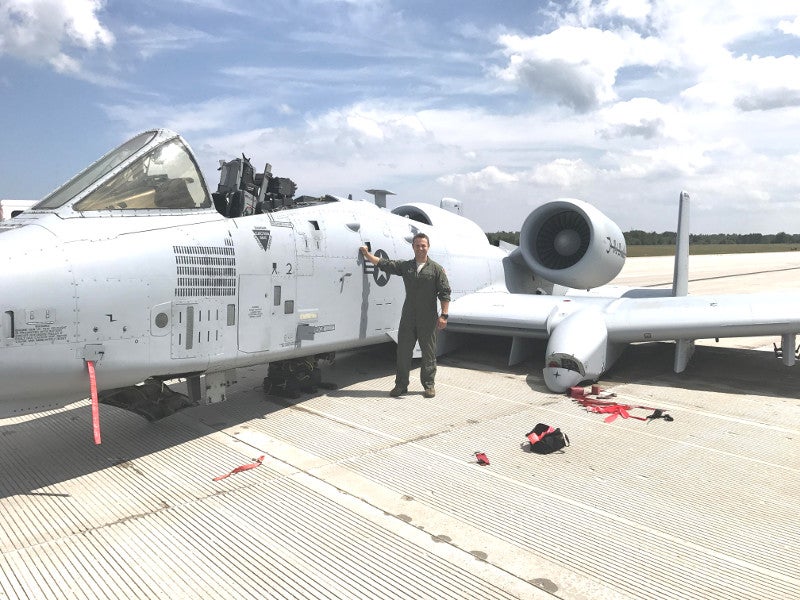 The U.S. Air National Guard has released additional details about what sounds like a harrowing and potentially deadly mishap involving an A-10 Warthog in July 2017. In a testament to the plane’s ruggedness, the pilot was able to make a belly landing after an apparent malfunction with the 30mm GAU-8/A Avenger cannon coincided with the rear portion of the canopy completely breaking off in mid-air.

On July 20, 2017, Captain Brett DeVries, a pilot with the Michigan Air National Guard’s 107th Fighter Squadron, the "Red Devils," was taking his A-10 through a second strafing run as part of a routine training mission over the Grayling Air Gunnery Range, part of the state’s Camp Grayling’s Joint Maneuver Training Center. Flying nearby in his own Warthog, Major Shannon Vickers reported seeing a “donut of gas” briefly envelop his wingman’s cockpit.

The pilot of the stricken A-10 was now rushing out of the potential path of the other aircraft flying down the range. He was climbing while battling the air rushing around him as the plane flew on at approximately 375 miles an hour.

"It was like someone sucker punched me," DeVries said later. "I was just dazed for a moment."

He climbed up to 2,000 feet to put distance between himself and the range and take stock of the situation. At the same time, he dropped his seat down as low as it would go and tried to take cover behind the front windscreen.

"There was paper everywhere,” DeVries explained. “And I was afraid to open up my emergency checklist, because I knew that would just blow away and maybe get sucked in to an engine.”

The A-10’s engines are mounted above the fuselage at the rear of the aircraft. It wouldn’t have been hard for something to get sucked out of the cockpit by the slipstream and flying into one of the turbofans, potentially causing a catastrophic failure and adding to an already dangerous situation.

Realizing his wingman was in trouble, Vickers had flown up to get a visual on DeVries, and noticed whatever had happened had blown open a number of access panels under the other aircraft’s nose. This immediately indicated there had been some sort of malfunction with the A-10's Avenger cannon.

Here is a video of a A-10s training with other U.S. military personnel at the Grayling Air Gunnery Range in 2012:

The Warthog’s GAU-8 cannon is a beast in its own right, weighing 700 by itself, not including its ammunition drum, feeding system, and the two hydraulic motors that power everything. The whole system famously dwarfs a Volkswagen Beetle.

Fairchild Republic designed the A-10 to accommodate the weapon, not the other way around. As The War Zone explained in detail just recently, getting the gun to work with the aircraft attached to it was a complicated technical feat in of itself. Even today, whenever an A-10 pilot shoots the gun, it spews out a cloud of potentially dangerous gas and violently shakes the entire airframe.

We don’t know what happened to DeVries aircraft specifically and the Air Force is still investigating the accident. It’s not clear why the canopy broke away, either.

When a Warthog pilot uses the ejection seat, it does detach first. So, it is entirely possible that whatever happened to the cannon caused a reaction so violent that triggered this mechanism or shook it loose.

Whatever the case, DeVries and Vickers were more interested in figuring out how to get everyone safely back on the ground. Vickers began his career as an enlisted airman, working with A-10s on the ground, before becoming an officer and a pilot, so he tried to help troubleshoot the situation.

Since the canopy had failed, both men were concerned the ejection seat might be compromised in some way. If it didn’t work properly, it could be as much of a liability as a life saver, potentially getting stuck halfway out of the cockpit and trapping DeVries in a plane he no longer had any control over.

The mishap had apparently broken the A-10’s two primary radios, leaving DeVries to communicate via a third emergency system. Less than 100 miles away, personnel at the Alpena Combat Readiness Training Center, which shares a runway with Alpena County Airport, ran an ad hoc switchboard between the pilots and maintenance specialists at Selfridge Air National Guard Base further south.

The individuals in Alpena’s control tower put the maintainers on speakerphone, placing it next to a radio so they could talk directly to Vickers when possible. Vickers would then relay the information to DeVries.

DeVries eventually elected to try and fly to Alpena and make an emergency landing on the runway there, abandoning the idea of trying to eject over an unpopulated area. Then another problem came up, the nose landing gear, which sits right next to the gun, wouldn’t come down all the way and lock safely into place.

The Air Force captain retracted the two main wheels and prepared for a belly landing, still battling with the open cockpit. Coming in flat and slow, DeVries made about as smooth a landing as anyone could hope and walked away from the crash unscathed.

“I just thought, 'There is no way this is happening right now,'” Vickers recalled about talking his wingman down onto the runway as he flew closeby. “It all was sort of surreal, but at the same time, we were 100 percent focused on the task ahead of us.”

After watching to make sure DeVries had exited safely, Vickers returned to Selfridge without incident. "And I am thinking, did this just happen? That was the longest flight ever back, to Selfridge," he said.

The plane remained intact, though that's not particularly surprising given the Warthog’s hardy design. In the past, A-10s have survived significant damage to their wings, tails, fuselage, and engine pods, and still made it back to base.

In 2015, one of the blunt-nosed attackers made an emergency landing in Iraq after one of its engines suffered a catastrophic failure. With help from a U.S. Marine Corps contingent on the ground, Air Force personnel had the aircraft back in the air with an all-new engine in just five days.

The Michigan Air National Guard says that DeVries Warthog is in good enough condition that there are similar plans to repair it at Alpena and put it right back into service. In the meantime, U.S. Air Force Brigadier General John Slocum, commander of the 127th Wing, the 107th’s parent unit, says he will submit recommendations that both DeVries and Vickers receive “appropriate recognition” for the actions during the mishap.

"To this day, I really haven't second guessed anything," DeVries explained. "In that moment, your training kicks in. The training – that's what saves you and your wingman."