After sitting idle in retirement for three years, the best of the Tristar fleet will be brought back into service as aerial refueling tankers. 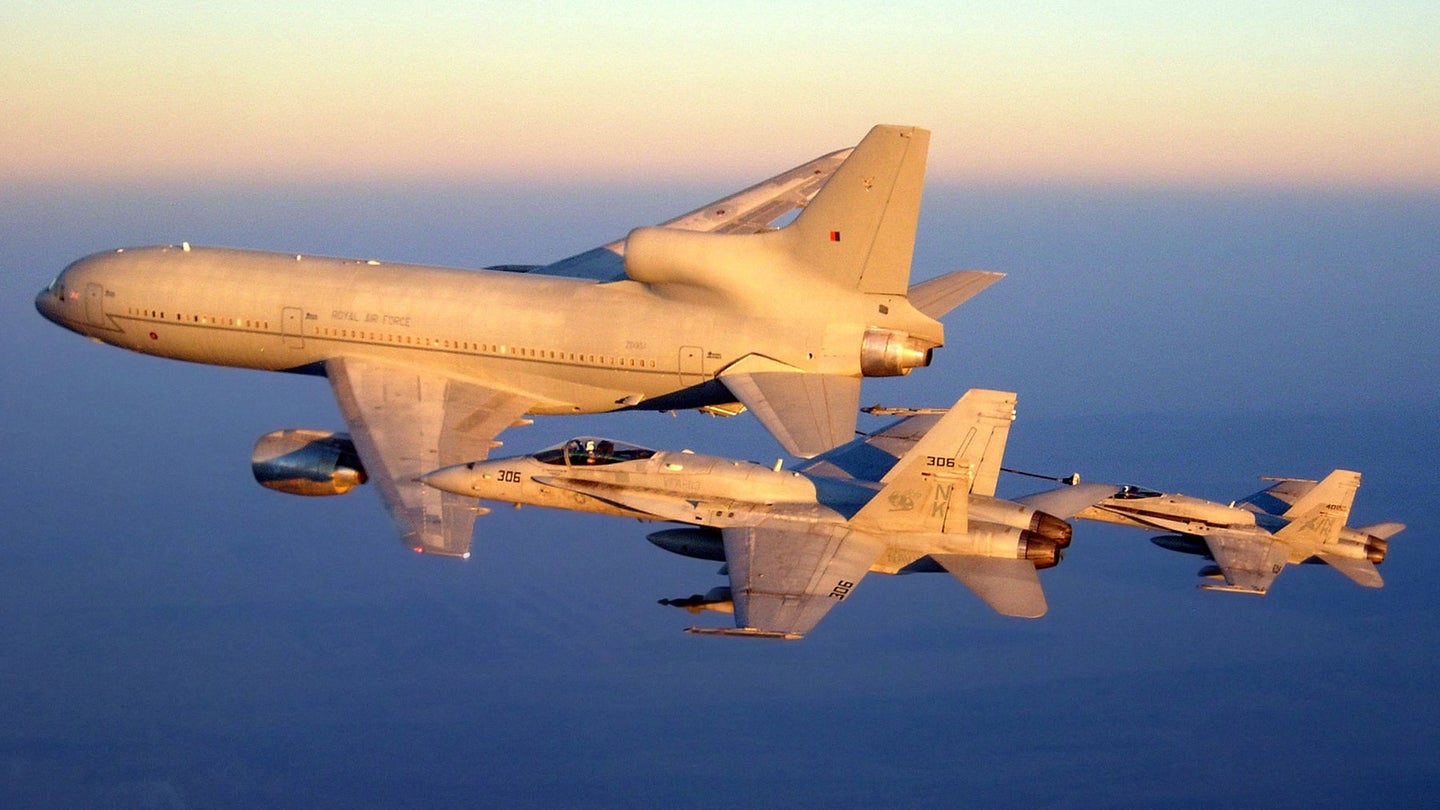 Nearly three years ago to the day I wrote about the Royal Air Force's retired fleet of Lockheed L1011 derived Tristar tankers being put up for sale. With nine aircraft available, some of them already outfitted for the tanker role, and for a very attractive price, the Tristars seemed like a perfect opportunity for a new private aerial refueling contractor to emerge. Now, this is exactly what has happened, with Tempus Applied Solutions of Texas buying six of the Tristars with the intention of entering the contracted aerial refueling market.

Tempus Applied Solutions provides a wide range of aerospace products, many of which are targeted at the defense industry and the Pentagon itself. This includes modifying existing aircraft for an array of testing and operational missions, many of which center around information, surveillance, target acquisition, and reconnaissance (ISTAR) duties. Their website describes they wide capabilities base and some of their customers:

"We fly airplanes—fixed wing and rotary, manned or unmanned. From surveillance missions in Africa to flight training in Texas, Tempus Applied Solutions is a safe, reliable, and effective operator. Uniquely, we also design and modify aircraft for special missions, certify them, and provide turnkey lease and service solutions... Our clients include NASA, the United States Department of Defense, Northrop Grumman, L-3 Communications, United States Africa Command, Joint Special Operations Command, and many other government agencies, individuals, and corporations."

Two of the Tristars that Tempus plans on acquiring are setup for cargo-passenger transport, while the other four are in the tanker configuration. Tempus says they plan on keeping three L1011 tankers operational, while using the other three airframes for spares. Tristars have all but disappeared from the sky, with Orbital ATK's "Stargazer" launch ship being the only one still operating in the United States. Keeping the three aircraft Tempus is planning on operating in the air would be a larger challenge without the spare airframes. In all about 250 L1011s were built.

The existing Tristar tanker configuration includes two hose and drogue refueling systems installed on the aircraft's empennage. This configuration allows for only one aircraft to be refueled at a time, with the other hose and drogue system acting as a spare. It is not uncommon for aircraft to break off a drogue "basket" or for other refueling components to fail, which would often result in a emergency divert by thirsty aircraft if no other tankers were nearby. As such, the Tristars offer enhanced reliability, not to mention they can hold a whopping 300,000lbs of gas. It is also possible that Tempus may add two additional refueling pods to their Tristar's outer wing areas, allowing for three aircraft to refuel simultaneously instead of one. This was eyed by the RAF as an upgrade before the jets out of service date was deemed too soon to justify the cost. The Tristar was replaced by the Airbus A330 based Voyager multi-role tanker transport (MRTT).

Three Tristars would represent a substantial private aerial refueling capability that the US Navy, USMC, or other foreign air arms with aircraft that use probe and drogue tanking to take advantage of. For the Navy and USMC in particular, the Tristars could offload up some of NAVAIR's tanking demand off the USAF's shoulders.

Omega Air in particular has done this for many years now and the model, both business-wise and operationally speaking, has already been proven. Large tanker aircraft, like the L1011, could not only help for training, but they could also drag groups of fighters across oceans for deployments, while also carrying support personnel and material. These missions can tie up USAF tankers for days at a time, and thirsty fighters like the F-35B will only require more of this type of support in the future.

"We are very encouraged to have found a potential solution for the shortage of AAR services that currently exist within the US Navy and Marine Corps tactical aviation and many NATO/Allied air forces. We will perform the necessary inspections and evaluations over the next several weeks in order that the transaction can close as soon as possible."

The Tristars have been in storage at Bruntingthorpe Aerodrome since their retirement a few years ago. Tempus will supposedly close the deal once the aircraft and their log books, as well as their support equipment are inspected. Then the aircraft will be brought back to flyable condition, which supposedly won't be a hard thing to do, and will receive maintenance that will prepare them to be ferried to the US for further updating. Tempus says it has already started marketing the aircraft's services to the Navy, USMC and NATO allies.

The Pentagon in general would be wise to contract out far more of its aerial tanker needs. The USAF has been especially resistant to doing so, likely do to fear that they would eventually lose large parts of the aerial refueling mission set to private contractors, and this means having fewer aircraft under its purview.

The War Zone has already detailed why the USAF should move to private aerial refueling support contractors so that it can focus more on the combat tanker support mission set, stating:

As the KC-46A comes online, it will be a great time for potential commercial tanker services providers to absorb retiring KC-135Rs, or introduce new platforms depending on what their customers want.  Even smaller tankers, like those based on the 737 or G550, can fulfill many missions where large tankers simply are not needed, and do so at a far lower cost.

Under such a concept, it has been proven that industry, the service, and the taxpayer win. On the tanking front, Omega Air has been doing this for some time now for the Navy and international customers and other countries are following suit. Additionally, private tanker companies’ adversary air support contractor cousins will increasingly provide aggressor training for the same US Navy and USAF fighter aircraft that private tanker companies of the future could be supporting as well. Doing so will introduce competition into the marketplace and will allow the USAF to invest heavily on higher-end capabilities, like stealthy tankers, instead of maintaining a one-size fits all tanker armada. The problem is that without the weight of the USAF in the marketplace, there really won’t be a robust marketplace at all.

Once again, the same thing is already happening with private adversary support contractors. It is simply too expensive and wasteful to fly an F-35 around as an intercept target for another F-35. The same can be said for putting large formations of enemies up in the air at one time to really challenge a 5th generation fighter pilot. As such, the USAF will follow the Navy’s example and will become more dependent on private adversary support companies for their training needs as their 5th generation fighter fleet continues to grow. Not embracing a similar strategy now for offsetting a portion of the USAF’s tanker needs is wasteful as procurement decisions are being made without factoring what is more of a eventuality than a possibility at this point."

The Air Force could use the money saved by unloading a portion of their tanking mission to private contractors to invest in building new tankers faster, and at lower cost, to replace aging ones. Retired KC-10s and KC-135s could find new life in the hands of contractors. Unloading a portion of the tanking mission is not just about having less planes to sustain. It also means that USAF pilots, who are in short supply, can be sent to fly other airframes and large swathes of existing infrastructure can be sold off or leased to private operators.

In other words, if there is any mission where private contractors can help the DoD's air forces, and especially the USAF, it is this one. Hopefully more companies like Tempus will come forward to take the risk—certainly others have tried and failed—but if the USAF could come to terms with the idea, it could really get the concept going on a grand scale. This would allow for stiff competition among multiple providers. As a result, lower prices and increase quality of service could be realized. The best part about such a plan is that the USAF could still keep its tanking mission, just with a more modern and potent, albeit smaller tanker fleet.

We will keep you informed as to the progress of the deal, but hopefully we will see a trio of reinvigorated Tristars plowing the skies over the US soon.