It's not clear whether the company is using the X-47B aircraft as a surrogate or an actual prototype design. 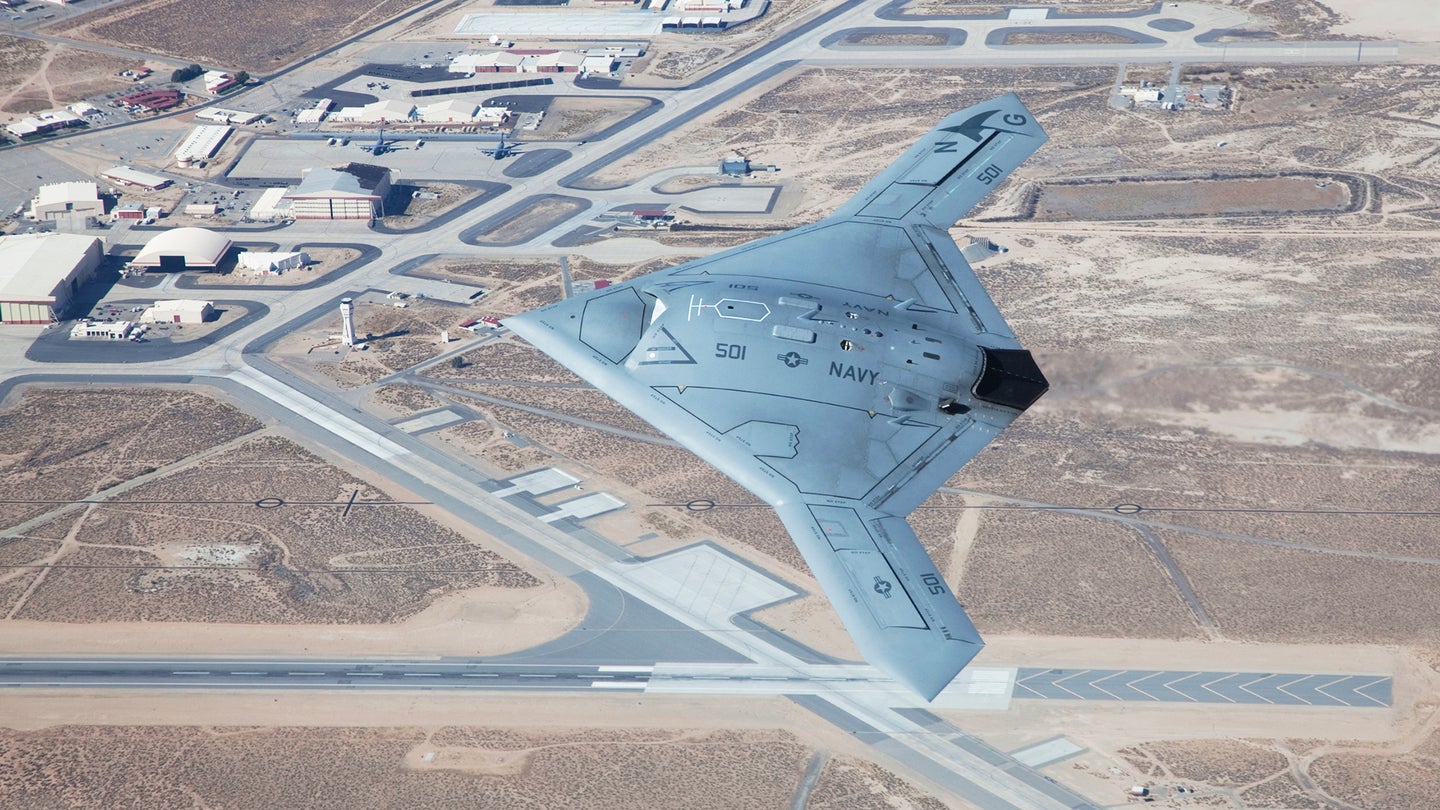 The four competitors vying to build the U.S. Navy’s MQ-25 Stingray drone have, so far, not released any official pictures of a mockup or prototype design, as well as very little in the way of concept art. Now, pictures Aviation Week obtained from an anonymous source appear to show Northrop Grumman is using its X-47B demonstrator at least as a testbed for its submission.

On Aug. 12, 2017, Aviation Week posted one of an apparent series of images of an X-47B at the U.S. Air Force’s Plant 42 flight test facility situated next to Palmdale Regional Airport in California. The unmanned aircraft appears to have a drop tank under one wing and an air refueling or “buddy” store under the other, which contains a probe-and-drogue aerial refueling system.

Major defense contractors use Plant 42 for a variety of advanced flight test and production tasks for not just the Air Force, but other services, as well. Three of the four companies working on the MQ-25 – Boeing, Lockheed Martin, and Northrop Grumman – have facilities within the site. The Fourth, General Atomics, has been known to use other secretive facilities nearby.

Between 2011 and 2015, the U.S. Navy extensively tested the two stealthy X-47Bs as part of a program aimed at exploring the potential of a carrier-launched unmanned combat aerial vehicle, known as the Unmanned Combat Air System Demonstrator (UCAS-D). The service initially expected this would provide a starting point for the now cancelled Unmanned Carrier-Launched Airborne Surveillance and Strike (UCLASS) program, which would have led to a final combat-ready design.

The War Zone has already written in depth about how service subsequently shifted its requirements away from a drone capable of striking or gathering intelligence about targets in high-threat environments to a pilotless flying gas station, which you can read more about here, here, and here. According to a report by USNI News in July 2017, the Navy has now shifted its focus for the present follow-on Stingray program, also known as the Carrier-Based Aerial-Refueling System (CBARS), almost entirely onto aerial refueling.

So, the configuration visible in the pictures would fit perfectly with the Navy’s latest vision for the tanking-focused MQ-25, which requires the use of the service’s existing Cobham air refueling pods. Beyond that, contractors reportedly have significant freedom in their designs.

“We are saying that you do have to use the existing aerial refueling store that F/A-18s [and] S-3s have used – and that’s externally carried – and that’s to reduce development, cost and timeline and risk,” U.S. Navy Captain Beau Duarte, the MQ-25 program manager, told USNI News in July 2017. “But how you configure the air vehicle to deliver that fuel is up to industry.”

However, we don’t know whether Northrop Grumman intends to morph the X-47B into an aerial refueler or is simply using the aircraft to test out the necessary technologies for this mission. The firm transported the two demonstrators from Patuxent River to its facility at Plant 42 earlier in 2017, saying they intended to use them for further test purposes.

The probe-and-drogue system uses a length of hose attached to receptacle "basket." The other aircraft plugs a refueling probe into the basket to receive fuel. The basket can sometimes move erratically around in the air depending on environmental conditions. The X-47B already holds the honor of being the first unmanned aircraft, at least officially, to successfully take on gas from a manned tanker using this method, but systems to help in automated aerial refueling, including stabilized drogues, have been in development for many years.

It would make sense that Northrop Grumman would use this advanced experimental plane at least to help develop the software and hardware necessary for a functioning drone tanker. It’s not clear, however, whether the X-47B in its present guise or a derivative thereof could truly fulfill the Navy’s mission tanking requirements.

As of 2016, the Navy’s definition of the mission tanking requirement was the ability to provide nearly 1,500 gallons of jet fuel “after reaching an optimum tanking profile,” which it did not define in a notional mission description the author previously obtained through the Freedom of Information Act. The U.S. Air Force’s KC-135 and KC-10 tankers provide the bulk of the mission tanking across the U.S. military at present, a mission profile that can involve tankers operating in orbits relatively close to target areas.

The Cobham pod itself has a 300 gallon capacity, meaning that the drone would have to carry at least another 1,200 gallons, internally or in drop tanks, of extra fuel. When the X-47B performed its own full aerial refueling test, it took almost 600 gallons of fuel, but we don’t know whether this was the maximum capacity of its internal tanks.

Additional under-wing tanks, like the one seen on the aircraft at Plant 42, could possibly limit the unmanned aircraft’s performance, requiring it to carry still more fuel in order to adequately perform its mission depending on the exact mission profile. According to the Navy, the X-47B had at least 4,500 pounds of internal payload space, which Northrop Grumman could potentially fill with additional fuel tanks.

But whether or not converting the stealthy drone to a tanker is feasible, it still might not be cost effective. Lockheed Martin already speculated in March 2017 that all four firms taking part in the MQ-25 would likely need to completely overhaul their designs, previously all advanced low-observable aircraft with features focused on penetrating through networked air defenses. But there are a variety of issues at play, as I wrote in July 2017:

If the Navy did decide it needed a deep strike unmanned combat air vehicle in the future, an aircraft that may ultimately become essential for operations in heavily defended areas, these new pilotless aircraft could be wholly unsuitable for the task. Whether they could perform the kind of secondary reconnaissance mission the Navy had originally envisioned is debatable with this new primary focus on longer range aerial refueling. A modular design that could accept additional mission equipment would [not] necessarily be a substitute for a purpose-built low observable design.

In summation, Northrop Grumman could be using the X-47B as a test vehicle for a final, stealthy tanker design that could be more readily adapted to intelligence or strike missions, if necessary. However, this seems unlikely given how far removed that type of aircraft would be from the Navy's known and far less ambitious CBARS requirements, and how much it will likely cost.

It also could be that Northrop Grumman intends to use the same basic platform as the X-47B, albeit simplified and without the need for apertures for sensors or weapons bays. Finally, as mentioned earlier, the X-47B could be used as a surrogate for the subsystems of an entirely new Northrop Grumman C-BARS design.

This would lower developmental risk and when added to all the other data the X-47B program has accumulated over the years, it could make even a new airframe design quite mature—at least in terms of what lies beneath its skin—and thus more competitive.