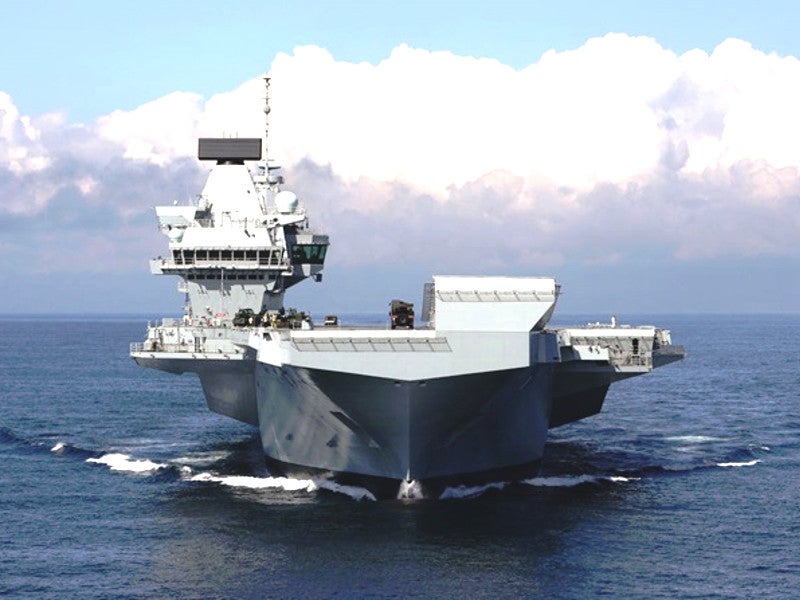 The Royal Navy’s new supercarrier HMS Queen Elizabeth and her escorts are about to finish a series of multi-national training exercises off the coast of Scotland. Notably, the flattop joined the U.S. Navy’s USS George H.W. Bush and members of her own Carrier Strike Group Two (CSG-2) to practice what may become a model for future combined operations between the two navies.

On Aug. 1, 2017, 15 ships and more than 6,000 personnel from five countries – Germany, Norway, Sweden, the United Kingdom, and the United States – arrived in the North Atlantic Ocean to kick off the drills, called Saxon Warrior 2017. While the NATO-led event was ostensibly intended as an opportunity for the different naval arms to practice working together, the main attraction was the two carriers operating alongside each other as they might in a future conflict.

So far, the two ships, along with their escorts and surface ships from the other participating nations have run through a number of individual training events against a number of mock air, surface, and sub-surface threats. Aircraft taking part in the exercise trained to fly strategic strike, air defense operations, combat air support missions, as well as help enforce a no-fly zone.

In one case, ships defended themselves against a simulated swarm attack by small boats. American and British logistics vessels took turns refueling each others' warships, demonstrating their ability to support each others’ operations, as well.

But training for carrier operations is especially important for the Royal Navy, which hasn’t had a carrier with fixed wing aircraft since it retired HMS Ark Royal in 2011. HMS Ocean, a smaller helicopter carrier, is scheduled to leave service in 2018. Neither ship was anywhere near the size and complexity of Queen Elizabeth or her forthcoming sister ship, HMS Prince of Wales.

“The U.S. Navy, out of huge generosity, has given us the whole of their carrier strike group so that we can practice the command and control of a carrier doing these operations in British waters,” Royal Navy Captain Ken Houlberg, Chief of Staff to the Commander of the U.K. Carrier Strike Group, said. “When HMS Queen Elizabeth comes into service later this year we will be well on the way to forming our own carrier strike capability.”

Most significantly, Saxon Warrior gives the Royal Navy a chance to work with and observe the activities of a carrier with a full air wing. At present, the U.K. has no F-35B Joint Strike Fighters, expected to make up the core of Queen Elizabeth’s aviation compliment, available to train with the new carrier. Instead, the Royal Air Force provided the actual British fighter jets for the exercise with its land-based Eurofighter Typhoons.

The U.K. Ministry of Defense has insisted that Queen Elizabeth and her air wing will both be fully operational by 2026. However, what full operational capability means for the ship isn’t necessarily clear, as we at The War Zone noted in our profile of the British carrier when she set sail for her sea trials in June 2017:

There is the very real potential the British may decide to trim their own purchases, too. Earlier in June 2017, The Times of London reported that the Royal Air Force was pushing for a reduction in the planned purchases of F-35Bs in order to free up funds for the conventional F-35A model. The proposal would potential cut the total number of B models to as few as 48. “Decisions on the precise details will be taken at the appropriate time to ensure the most appropriate capability and the best value for money,” was all the U.K.’s Ministry of Defense would say on the record to The Times.

A fleet of 48 F-35Bs would prevent both Queen Elizabeth and Prince of Wales from operating with a full complement of strike aircraft, based on the official plan, especially since its unlikely the Royal Navy would have all of its Joint Strike Fighters embarked at any one time. The Royal Navy has already said what it would do with its first 42 F-35Bs, which were supposed to be in operation by 2023. Under the scheme 24 will be used for the deployment on carriers and 18 will be used for training.

Relying on a ski jump and vertical landings instead of catapults and arresting gear to launch and recover aircraft, the ships require a short take-off and vertical landing optimized aircraft like the Joint Strike Fighter’s B version, too. So if something happens to the Royal Navy's F-35B plans, there are no readily available alternatives. The service sold off its entire remaining fleet of perfectly capable Harrier jump jets after announcing it would retire Ark Royal in 2010. There's no getting them back, either, since the U.S. Marine Corps promptly snatched up the aircraft to help sustain its own Harrier fleet.

As such, the first aircraft to land on Queen Elizabeth was a Merlin helicopter, which will also be part of the final air wing. Without any actual Joint Strike Fighters, Royal Navy deck crews have been training on land with full scale models of the F-35 in preparation for taking up their actual roles onboard the carrier.

“We are extremely fortunate,” Royal Navy Lieutenant Commander James Capps, who is the service’s Fixed Wing Operations Officer for Saxon Warrior 2017 and is situated aboard George H.W. Bush, said. “Being here on the George H.W. Bush has given us the opportunity to see where we are and what we need to achieve for our own U.K. carrier strike capability and to be here to see how the U.S. does it has been fantastic preparation.”

These sorts of exchanges will likely become more common place as the Queen Elizabeth gets ready for her first patrol, presently scheduled for 2021. In December 2016, the U.S. Marine Corps and the Royal Navy cut a deal for Marine F-35Bs to join the U.K. carrier’s air wing for that initial deployment. American and British personnel will have to spend a significant amount of time training with each other in order for this arrangement to work.

Saxon Warrior 2017 may actually be a first look at how Queen Elizabeth could operate more broadly, too. In July 2017, work began on the first of the Royal Navy’s future Type 26 City-class frigates, which are supposed to ultimately replace the aging Type 23 Duke-class.

These frigates, along with its Type 45 Daring-class destroyers, will be at the core of the future U.K. Carrier Strike Group. Unfortunately, there are relatively few of them to support extended, independent carrier battle group operations. A typical American carrier strike group includes at least one guided missile cruiser, two or three guided missile destroyers, and at least one fast attack submarine, as well as being able to call upon a ready fleet of logistics vessels.

It is quite possible that the Royal Navy may seek another deal with its American counterparts to field combined carrier battle groups in order to ease the burden on its own surface fleet. Other allies might be willing and able to contribute to these shared operations, as well. For one photo-op during the exercise, Queen Elizabeth and her escorts sailed with U.S. Navy’s George H.W. Bush, Ticonderoga-class cruiser USS Philippine Sea, and the Arleigh Burke-class destroyer USS Donald Cook, as well as the Norwegian Navy’s Fridtjof Nansen-class frigate HNoMS Helge Ingstad.

Saxon Warrior ends on Aug. 10, 2017. Queen Elizabeth is set to enter her new homeport at Portsmouth for the first time sometime before the end of the month, according to the U.K. Ministry of Defense. She is then scheduled for more sea trials before she formally enters service sometime in 2018.

By then, it should be even more apparent how the Royal Navy expects to operate its new carrier strike group.