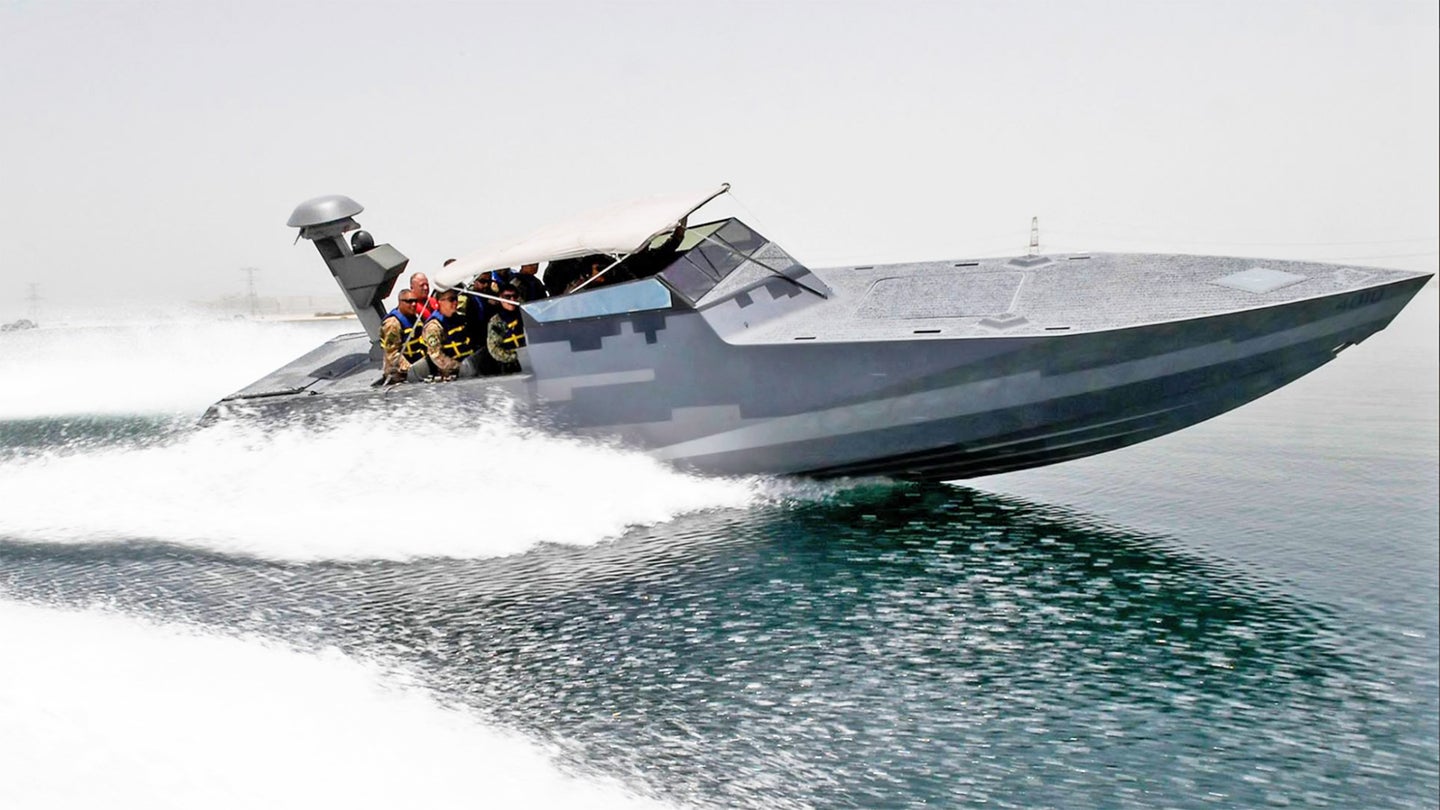 As we at The War Zone have noted before, the U.S. Navy’s Special Warfare community has a keen interest in the bleeding edge of what technology has to offer, as do other American special operations forces. Still, the U.S. military can be tight-lipped about many of these systems, often declining to actively publicize their use or even their existence in some cases. So it was interesting to see U.S. Central Command recently highlight the Combatant Craft Assault (CCA), one of Naval Special Warfare Command’s family of specialized stealthy boats, on social media.

On July 27, 2017, CENTCOM posted a picture of one of the craft reportedly sailing off the coast of the United Arab Emirates. U.S. Army General Joseph Votel, who is in charge of the command, which oversees American military activities in the Middle East and Central Asia, had apparently taken a staff ride along with other senior leaders on the boat during a trip to the region.

The Tweet tagged the U.S. 5th Fleet, which has its headquarters in nearby Bahrain, as well as the Navy’s main account. However, it is more likely that the CCA was from a task force assigned to U.S. Special Operations Command Central, the top special operations element in the region.

SOCCENT is known to have at least one task force dedicated to training and advising their counterparts from the Gulf Cooperation Council regional bloc, which includes Saudi Arabia, Kuwait, the United Arab Emirates, Qatar, Bahrain, and Oman. These boats and their crews could be detached to a number of different elements, as well. In May 2017, another CCA, this time speeding along in the Gulf of Aqaba off the coast of Jordan, appeared in an official video showing scenes from the annual Eager Lion training exercise.

From what little we know about the 41-foot long craft, technically known as the CCA Mk. 1, it is low-observable design with a composite material hull and a pair of high performance engines that could operate with a low likelihood of detection even close to shore. It is reportedly small enough that U.S. Air Force C-17s can air drop it directly into a given body of water, likely using an arrangement similar to the Maritime Craft Aerial Delivery System (MCADS) for the Naval Special Warfare community’s 36-foot rigid-hull inflatable boats (RHIB), which you can see in the video below.

The Navy specifically purchased the CCAs for medium range missions to insert or extract special operators or to discreetly conduct coastal surveillance, according to one unclassified briefing. Side-folding panels at the rear of the boat may offer additional protection, but there are no obvious provisions for mounted weapons. These fixtures are built inside the boat's clean outer mold-line or are retractable/removable when not in use to maintain the CCA’s stealthy shape. The crew and passengers would undoubtedly carry individual weapons for self-protection as well.

Each craft has a sensor mast with what may be a small surface search radar, as well as an electro-optical sensor turret with day- and night-vision capabilities. One unclassified 2014 technical report says that at least some of the boats had a satellite communications antenna flush in the top of the bow.

The Navy received the first of these craft from United States Marine, Inc. sometime between 2012 and 2013, though development had started as early as 2010. Production continued until 2014 and the CCA was only expected to reach full operational capability during the 2017 fiscal year.

But it’s clear some of them are zipping around the Middle East. Within the often cramped confines of many of the region’s waterways, this makes perfect sense. During any hypothetical conflict with a country bordering the Persian Gulf or the Gulf of Aqaba – Iran is probably the most obvious example – American special operations forces would likely have the job of scouting and raiding ashore in support of amphibious landings or other larger conventional operations.

The Iranians are already acutely aware of this possibility, using their network of small islands in the Persian Gulf as bases to patrol and otherwise monitor the water way in case of potential attacks. They may have even mistook a pair of Riverine Command Boats from the U.S. 5th Fleet’s Commander, Task Force 56 for just such a commando operation during a contentious international incident in 2016. After detaining the American sailors, members of the Iran’s Islamic Revolutionary Guard Corps reportedly demanded to know where the Navy’s “mother ship” was, apparently believing that this was part of a larger infiltration operation.

This incident showed exactly why a stealth boat like the CCA would be essential for SEALs moving in and out of defended shorelines with a reduced chance of detection. There might be a mother ship in those scenarios, as well. Given that it could launch and recover RHIBs, it is very possible that a Navy sea base, like USS Ponce could accommodate the CCA. According the annual review from the Pentagon's Office of the Director, Operational Test and Evaluation, the service's huge new Expeditionary Mobile Bases can do so for sure. One of these, USNS Lewis B. "Chesty" Puller, left the United States to take over for Ponce in June 2017.

The Navy could also deploy the larger, but still stealthy Combatant Craft Medium (CCM) and Combatant Craft Heavy (CCH) types to the region to support such activities in the event of a crisis. Boutique ship builder Oregon Iron Works, now known as Vigor Works, began building both of these types in the early 2010s, finishing the first prototypes circa 2013. The CCM is larger, with a hull approximately 60 feet long and an enclosed crew space, but it appears to have a very similar sensor and communications configuration to the smaller CCA.

Some available photographs do show the CCM with a twin .50 caliber machine gun mount at the rear and there are reports that it can accommodate a remote weapon station. This would make sense since the craft is a partial replacement for the older Mk. V Special Operations Craft, which had a number of fixed weapon mounts.

Unlike the larger Mk. V, however, the CCM can fit inside a C-17. The Vigor Works craft is also a partial replacement for the RHIB, which had previously filled the CCM role. However, the RHIB has its own advantages, including being air drop capable from a C-130.

The CCH, also known as the SEAL Insertion, Observation, and Neutralization craft, or SEALION, is a significantly larger and more capable boat. The fully-enclosed, semi-submersible vessel has retractable sensor and communications masts and provision for jet skis, inflatable rubber raiding craft, and diving equipment. Special operators would exit through a large door in the rear.

The Navy presently has two CCH types, the initial SEALION-I, essentially a prototype derived from an earlier design known as the Alligator, and the enhanced SEALION-II, which has the same overall shape. On June 2, 2017, U.S. Special Operations Command awarded Vigor a contract work more than $17 million for another craft, called SEALION-III.

During the contracting process, SOCOM did investigate five other potential designs, though it redacted the vendors’ names from official documents. One of these may have been M Ship Company’s M80 Stiletto, another uniquely shaped stealth boat. As of 2016, the Naval Special Warfare Combatant Craft Division out at Naval Surface Warfare Center, Carderock, which previously handled development of the CCM and CCH, was still experimenting with an M80 in a variety of roles with help of Naval Special Warfare Group 10.

Ultimately, the command decided to sole-source the SEALION-III project to Vigor, citing its extensive knowledge of the existing craft and requirements. However, this doesn’t necessarily mean the M80 or other designs might not have a future in the Naval Special Warfare community.

After 2020, it is very likely that the Navy will want to begin updating its fleet of special operations stealth boats. There are already plans to begin production of a CCA Mk. 2, which could be an upgrade of the existing type or a new boat altogether, in 2020. The M80 would be too big for that requirement, but SEALs and Special Boat Team personnel might be interested in other emerging designs, such as the fully submersible HyperSub.

We’ll be keeping our eyes open for more sightings of the existing the Navy’s existing stealthy combatant craft or new prototypes, either abroad or at home.