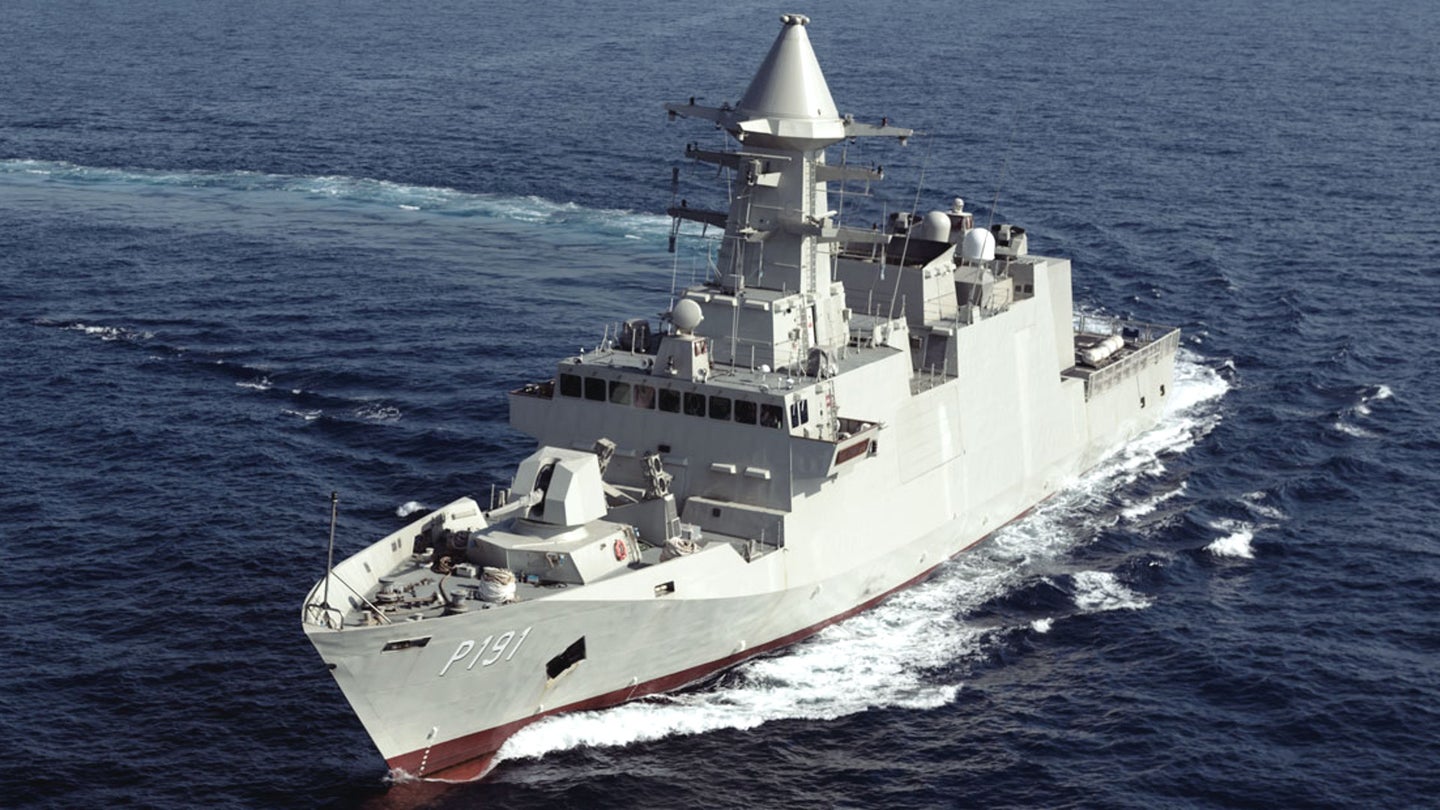 In the third such successful strike on warships belonging to the Saudi Arabia-led coalition in Yemen since the beginning of 2017, Houthi rebel recently attacked an unknown vessel of the United Arab Emirates’ Navy. Beyond this most basic detail, however, both sides have released wildly different and equally unconfirmed statements regarding the incident.

On July 29, 2017, pro-Houthi forces, referring themselves as the “Yemeni Navy,” released a statement taking responsibility for the attack, which they said occurred in the Red Sea off the coast of the port city of Mocha, Yemen. According to an English-language report from the Houthi-controlled SABA news agency the next day, the insurgents killed 12 UAE personnel, wounded another 23, and damaged a nearby minesweeper at the same time. There was no information about the method of attack.

“The targeted warship was heavily loaded with weapons and ammunitions and that the ship went into a series of explosions … after [which] aircrafts helped extinguished the flames,” an unnamed Houthi-aligned official told SABA. “The injured were airlifted to the Eritrean port city of Assab for treatment.”

On July 30, 2017, Iran’s PressTV carried another report, citing an unnamed Yemeni military source, that said “dozens” of Emirati troops had died and two dozen had suffered injuries in what it described as a “missile attack” on an unspecified “frigate.” The other details from the Iranian outlet were the same as those in the Houthi statement. Chinese state media outlet Xinhua’s English story on the incident said “rockets” were responsible for the damage, though this could have been a simply translation error.

The UAE’s Navy operates a number of corvette-type ships, a category that some refer to as frigates. The largest of these are Italian-made Abu Dhabi-class, which displace 1,650 tons and are armed with Exocet anti-ship missiles, torpedoes, a 76mm main gun, and other smaller weapons. The Emiratis also have six Baynunah-class and two Muray Jib-class types, both of which are smaller and displace less than 1,000 tons.

All three types have space for a single light helicopter on their rear deck. This could help explain other reports that the ship was “carrying helicopters” during the attack. It would also support descriptions of helicopter activity after the incident, though it wouldn’t confirm the exact reasons they were airborne.

If the reports about a accompanying mine hunter receiving damage are true, this may have been one of the UAE’s two ex-German Frankenthal-class ships. This vessel could have belonged to another coalition member, such as Saudi Arabia, as well. The presence of a mine-hunting ship points to the increasing importance of these weapons in the Houthi arsenal, an recently emerging threat that The War Zone’s Tyler Rogoway has previously examined in detail.

Whatever ships were involved in the attack, the Saudi-led coalition’s official description of the attack is almost completely at odds with the statements from Houthi-aligned sources. Al Jazeera, citing a Saudi Press Agency report, said that the rebels had actually employed a remote-control boat laden with explosives to strike a group of ships sitting pier side in Mocha’s port. According to Saudi officials there were no casualties or significant damage at all on the ships.

This dissonance in the stories is striking, but not necessarily surprising. The Houthis and their allies, including both former members of the Yemeni military and Iran, have been engaged a brutal conflict with the Saudi-led coalition for more than two years now. There continues to be significant fighting in many parts of the country, including in the vicinity of Mocha. Just over the weekend Saudi-backed Yemeni forces reportedly retook control of the Khalid Ibn al-Walid military base, also situated near the country’s western coastline, while pro-Houthi forces launched an attack on the city of Taiz, approximately 50 miles east of Mocha.

At the same time, both sides often accuse the other of human rights abuses and deny similar reports leveled at their own forces. Independent reporting has become increasingly difficult to come by as Saudi authorities have made it difficult for journalists to get into the country, even to the point of blocking United Nations aid flights carrying reporters.

A similar conflict in reports surrounded a strike on another UAE warship exiting the Mocha port in June 2017. The Houthis said that attack, which the group said involved a land-based anti-ship missile, severely damaged the Emirati vessel. Afterwards, the Saudi-led coalition again confirmed the attack, but denied there was any significant damage, saying that only a single sailor had received unspecified injuries.

Six months earlier, Houthi forces had attacked the Saudi frigate Al Madinah in the Red Sea near the port city of Hodeidah, some 100 miles north of Mocha. In that case, the rebels again claimed they had fired a missile at the warship. Saudi Arabia acknowledged a number of casualties, including two fatalities, in what it described as a swarm attack by three suicide boats.

The U.S. Navy later claimed this had been the result of a remote-controlled explosive-filled boat. Video later emerged showing a small craft slamming into the side of the frigate, but it was difficult to tell if there was anyone on board or not. American officials suggested that the equipment needed to turn the boat into a deadly drone, as well as the explosive payload, might have come from Iran, which the United States had already been connected to other illicit arms shipments bound for the Houthis. If this July 2017 attack involved another unmanned craft, its possible the necessary gear could have come from the same source.

Regardless, these incidents followed a spate of confirmed anti-ship missile attacks on Saudi-coalition warships, as well as U.S. Navy ships in the area, in late 2016. One of these attacks notably destroyed the ex-Swift, a high-speed catamaran transport vessel the UAE had obtained after she left American service. Greek ferry operator SEAJETS later purchased the remnants of the ship and towed it to a shipyard in the city of Eleusis. Again, it was unclear whether the missiles involved in any of these attacks came from foreign sources, such as Iran, or from former Yemeni military stocks.

At the same time, civilian merchant ships in the area have also run the risk of getting caught up in the fighting. “We cannot rule out the possibility of Huthis [sic] attacking commercial shipping,” the U.S. Navy’s Office of Naval Intelligence (ONI) noted in one infographic dated Oct. 10, 2016, a heavily redacted copy of which we obtained through the Freedom of Information Act.

However, prior to the end of October 2016, “one of the largest war risk insurance associations in the world reported to its clients it had no information indicating merchant vessels were being targeted by Huthi [sic] rebels,” according to another heavily censored ONI report from December 2016 that we also received through FOIA. “It noted that collateral damage could occur, but considered this highly likely.”

That same insurance associated, which the Navy did not name in the unredacted portions of its report, but could have been Lloyd's of London, changed its threat level for commercial shipping in the region from moderate to high following a reported attack on the Galacia Spirit, a liquid natural gas tanker belonging to Norwegian firm Teekay Petrojarl. A subsequent report on that incident suggested that the premature detonation of explosives on the boat had ended the attack.

“Starting in early October 2016, there have been a series of report attacks and advisories issue to the commercial maritime industry,” ONI’s December 2016 report continued. “With regard to the reported attacks, the intention is not to confirm or deny whether specific events occurred, but to report what information the industry received about the events, which likely drive its perception of threat,” the naval analysts added, underscoring the difficulty in obtaining clear details about incidents in the region.

It is possible that rebels or other members of previous Yemeni regimes may be engaging in some form of piracy or other criminality, too. Earlier in July 2017, Bloomberg examined the case of the 2011 hijacking of the oil tanker Brillante Virtuoso, which pointed to former Yemeni security forces or mercenaries someone hired in the country being involved in what might have been more than one elaborate high seas insurance frauds.

What is clear from all of these incidents is that the Houthis and their allies remain credible threats to military and commercial ships in and around Yemen’s coasts. In addition, they have a number of different weapons at their disposal, including anti-ship missiles, mines, and unmanned explosive boats, with which to launch these attacks.

As the conflict in Yemen continue to be a brutal slog, it seems likely that the Houthi’s “navy,” will only continue to strike warships from the Saudi-led coalition, as well other vessels depending on their perceived affiliation, where and when it can.