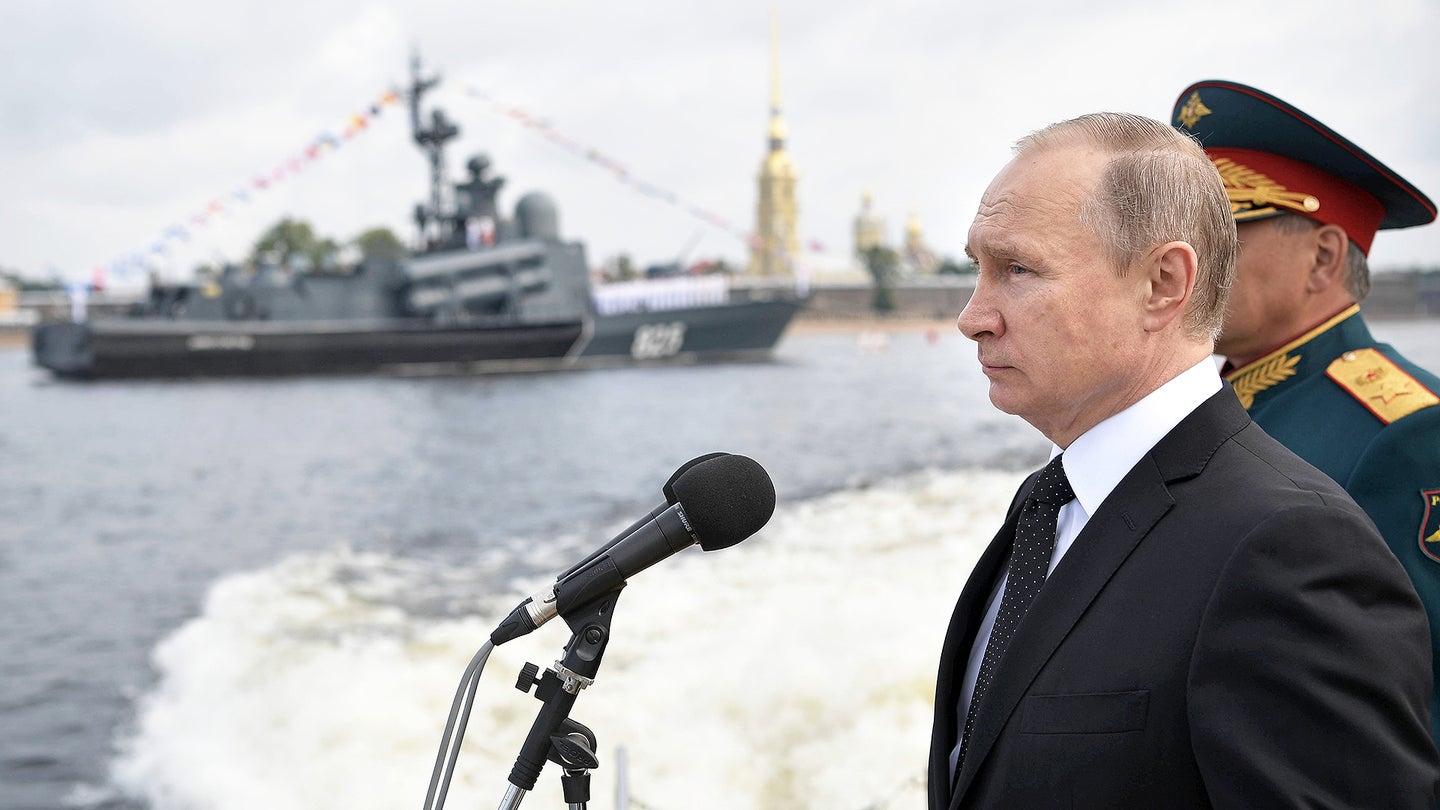 This weekend featured grand military parades for both China and Russia. In St. Petersberg, Russia celebrated "Navy Day" in unprecedented scale. Other naval parades were also held in other Russian ports, including hot spots Sevastopol, Crimea and Tartus, Syria. China's parade, which took place at the remote Zhurihe military base in Inner Mongolia, was focused on land and in the air, celebrating the 90th anniversary of the People's Liberation Army.

In both events, the country's leaders were the stars of the show, with Putin overseeing festivities in St. Petersburg and a military fatigue wearing Xi Jinping presiding over the display of military might in Zhurihe.

Navy Day is not new to Russia, it usually takes place the last Sunday in July, but the scope of this Navy Day is. The new prominence of the annual event supposedly revives the tradition started by Peter the Great in 1714. Above all else, it is a perfect prism for which the Kremlin can show off its modernizing naval forces and key alliances to the world.

We have tracked the unprecedented deployment of Russia's largest surface combatant and submarine—both of which are nuclear powered relics from the height of the latter Cold War—from the announcement that they would be included in the parade, through their high-profile voyage from the Barents Sea to St. Petersburg. We also detailed China's naval task force's arrival in the Black Sea. Their ships, a destroyer, a frigate and a supply ship, also took part in the parade—a major symbol of the deepening military ties between Moscow and Beijing.

All in all, some 50 ships and submarines were involved in the parade, as well as nearly as many helicopters and fixed-wing aircraft. Also, for the first time ever, 5,000 sailors from the Baltic, Northern, Caspian and Black Sea Fleets all took part in the parade in St. Petersburg.

President Putin said following during an address to sailors participating in the naval review:

"The Navy and commitment to Fatherland are inseparable. As Admiral Nakhimov used to say, a sailor has neither an easy nor difficult path, but rather a glorious one. And everyone currently serving, in our ground forces and submarines, in the marine air force, in the coastal defense, and those who work in the shipbuilding industry, all are faithful to these vows. Their high moral and professional qualities have been and will remain the foundation of successful service in the Navy, and the state will offer its full support...Thank you for your readiness and your ability to solve the most complicated tasks, for your worthy service and your unwavering allegiance to our Motherland and to our people."

Nearly a hemisphere away, over at China's massive Zhurihe military training complex in Mongolia, the affair was a bit more ominous, with throngs of soldiers, military vehicles and aircraft showing off above all else their shear volume and capacity for warfare. 12,000 troops, 100 aircraft and 600 pieces of ground based weaponry were put on display. These included China's first operational stealth fighter, the J-20, and the PLA's new DF-31AG offroad-mobile intercontinental ballistic missile.

The type is a more capable evolution of China's DF-31A, which likely includes multiple independently targeted reentry vehicles (MIRVs). Throngs of other ballistic missiles were displayed as well as rows of transporter-erector-launchers passed through the parade grounds.

Here is a video of the entire parade celebrating the 90th anniversary of the People's Liberation Army:

The big show of force came somewhat as a surprise, at least officially, as the Chinese government formally announced the display just a day before it occurred. It also started just over a day after North Korea executed its most menacing missile test yet, and mere hours after President Trump tweeted about how China was "all talk" when it came to dealing with North Korea's missile and nuclear programs even while they make billions from the US on trade, and that "we will no longer allow this to continue."

“Troops across the entire military, you must be unwavering in upholding the bedrock principle of absolute party leadership of the military... Always obey and follow the party. Go and fight wherever the party points.”

Jinping has been working to consolidate power in an attempt to gain another five year term as China's top Communist Party official.

Above all else, both parades are a reminder of rising global military competition with the US.