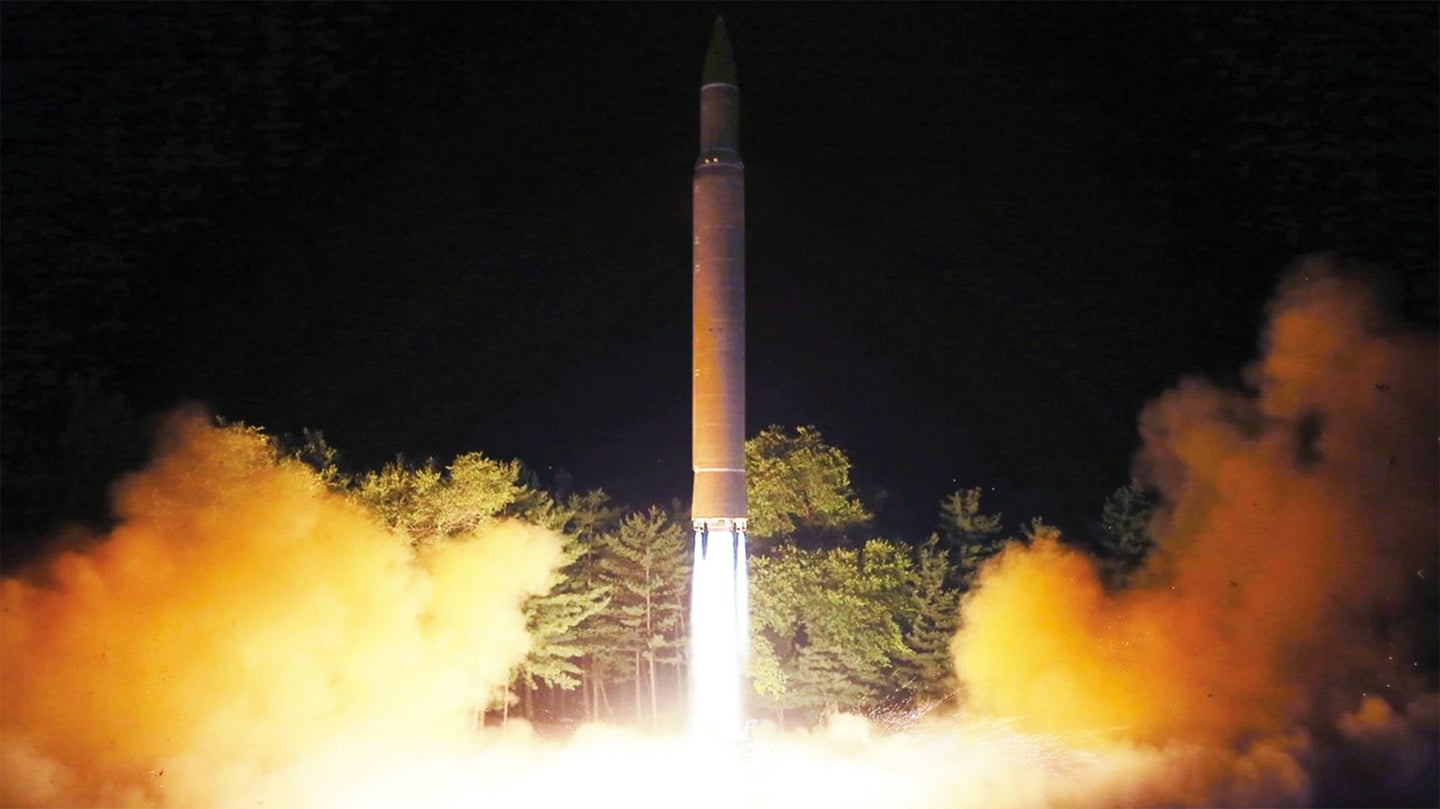 In less than a year and a half, North Korea went from parading supposed long-range missiles around a couple times a year to a country with a credible intercontinental ballistic missile capability. Even more impressive, in just the span of July, the North Koreans introduced their first ICBM to the world via a successful test launch, and have now fired the second and improved iteration of that same missile design. Here's what we know a day after the provocative test launch was executed.

The second test of what appears to be an upgraded Hwasong-14 ICBM flew longer, higher, and farther than the type's initial successful test launch on the 4th of July. The road-mobile missile took a steep parabolic trajectory to 2,300 miles above the earth. Nearly ten times the orbital height of the International Space Station. It covered a distance of 620 miles and spent roughly 47 minutes in the air.

All of these stats show a significant improvement over the first Hwasong-14 test, and now, by most accounts, they give the missile the ability to strike roughly half the continental United States, including Chicago, Denver and Los Angeles, with a nuclear payload.

This dreaded moment, one that has been long in the making and highly feared, came much sooner than most analysts expected. US intelligence agencies in particular have chronically underestimated the North Koreans—and the Chinese to a large degree—over the last decade and a half. But regardless of who predicted what and when, the time has officially come when North Korea has a missile that can put the continental US under direct threat of an attack.

Yet it seems that people are so accustomed to threatening news about North Korea, and particularly their missiles, that the reaction, at least here in the US, has been somewhat subdued. Maybe this is also because it has finally been made clear by the press and by key military leaders that there is no good military solution to the North Korean issue— at least one that doesn't include massive loss of life and the economic and social disruption of the majority of a hemisphere.

For Japan the issue is much closer to home and far more tangible. A record number of bomb shelters being ordered by the public and the Japanese government working to substantially enhance its missile defenses and the public's ability to survive an onslaught.

Although North Korea now has a missile capable of putting the continental United States at risk, it has been hotly debated if they also possess a reentry vehicle and warhead that could survive diabolical trip to its target. North Korea claims it has tested a miniaturized nuclear device, and we have seen images of such a device in Kim Jong Un's own mitts. North Korea also claims they have a reentry vehicle capable of accomplishing its one-way mission, but many analysts disagree with Pyongyang's proclamations. Some sources have said the reentry vehicle used for the July 4th test broke apart upon reentry. But yesterday some pretty amazing video was captured by local news cameras on the Island of Hokkaido showing North Korea's glowing reentry vehicle splashing down near the Japanese shores.

Open source intelligence gatherers have been able to find the locations of where the videos were shot, and from that alone it may be possible to search for what's left of the reentry vehicle. Obviously US, Japanese and South Korean intelligence gathering capabilities would likely have a much better idea as to its location. If it can be recovered, it could give unprecedented insights as to how far North Korea's reentry vehicle program has really progressed, and thus what the status of the country's overall nuclear weapons delivery system is at this time.

We also have what appears to be a location for the missile's launch site, near Jonchon, North Korea. The fact that it was executed at night, and in an area that doesn't appear to be improved for missile operations, aimed to tell the US, South Korea, and their allies that they can launch even their largest missiles seemingly anywhere and at any time of day.

Here are some of the stills coming out of North showing the launch:

Some even spotted what appears to be Jim Jong Un decoys running around the launcher while the missile was being set up. Although black suits similar to Kim Jong Un's are not uncommon in North Korea, the exact same one is. Also the haircuts are suspicious to say the least. This could have been in response to the US military's omission that they were actively watching the launch site before the first Hwasong-14 test on July 4th. The Kim regime is paranoid of a US or South Korean decapitation strike.

As for the US, South Korea and its allies' response to the launch, well it seems like business as usual. The US and South Korea executed a short-range ballistic missile launch of their own hours after, showing off their Hyunmoo-2 & ATACMS missiles as a silly attempt at a tit-for-tat response, just as they did on July 5th. It is also likely that we will see some USAF bombers do another useless flyby of the DMZ soon as well, just as they always seem to do. And just like clockwork, an emergency session of the UN Security Council has been called for.

Yesterday's launch will also likely put a final cap on South Korea's new President Moon Jae-in's hopes for direct deescalation talks with North Korea. Instead the young administration will likely move away from their campaign promises of a more dovish approach to the North, will migrate toward more heavy handed military deterrence alongside their US partners.

The fact of the matter is that North Korea's missile progress has been stunning, both figuratively and literally, as regional powers and the US seem have no idea as to how to deal with Pyongyang on the issue. The Trump Administration attempted to get China to dissuade Pyongyang from further provocative acts, but this effort has clearly failed. China is now fortifying its own border with North Korea in anticipation of some sort of foreign military action against the country. If the Kim regime were to crumble, potentially millions of already hungry and largely brainwashed refugees could attempt to enter China—something Beijing seems to be preparing for in a not so humanitarian way.

Still, even with the stakes being so high, US military commanders at the highest levels seem to be coming to terms with the possibility of enacting the military option among no other good alternative. This may be especially attractive as US missile defense capabilities can still potentially counter North Korea's low-volume threat. Chairman of the Joints Chiefs of Staff Joseph Dunford said the following last week:

“As I’ve told my counterparts, both friend and foe, it is not unimaginable to have military options to respond to North Korean nuclear capability...What’s unimaginable to me is allowing a capability that would allow a nuclear weapon to land in Denver, Colorado. That’s unimaginable to me. And so my job will be to develop military options to make sure that doesn’t happen... In the intelligence communities the general assessment was, and it has been public, that Kim Jong Un views his existence as inextricably linked to nuclear weapons and China will never cooperate. So those are the two things that everybody has basically said. That’s conventional wisdom of North Korea. So where does that leave us? Leaves us what, to a military option.”

The Pentagon's top uniformed official went on to say he isn't ready for that option just yet, but he makes it clear the timeline is far shorter than some may realize when it comes to waiting out diplomatic efforts:

"So I think for all of us, we should give Secretary Tillerson full support in attempting to resolve this diplomatically and economically even as we recognize that it may not happen, and there may have to be a follow-up option, which is the military option. We can wring our hands and say it will never happen or we can roll up our sleeves and make an effort to have a concerted economic and diplomatic plan that does cause KJU, Kim Jong Un, to come to the table and begin to have a conversation, at least stop the path that he’s on right now, which is further development of intercontinental ballistic missiles and nuclear capability, and to me it makes all the sense in the world to prove the theory of the case and to work this for a few more months."

President Trump has made big claims about not letting North Korea get its hands on a missile that can reach the US or a device to load aboard it. But so far the administration has been helpless when it comes to slowing Pyongyang's progress. With lines drawn in the sand already being stepped over, one must ask themselves if Trump and his national security team will have any good choice, especially politically, but to act against North Korea in some military fashion in the coming months.

The last straw could come in the form of a long-awaited sixth nuclear bomb test by North Korea. So far, Pyongyang has stuck to advancing its missile programs and not further evolving its miniaturized warhead capabilities through live detonations. But now, with a ICBM delivery system moving along at a quick clip, it may finally be time for North Korea to test its nuclear payload in a definitive manner. If this occurs, the chances of a military engagement will likely rise significantly, the outcome of which would be anyone's guess.

Update: 4:40pm PST— Just after posting the article above, Trump started tweeting about how China played him by doing nothing about North Korea and that he will do something about it.

Update: 7:20am PST (July 30th)— Just as predicted, Bombers made their "show of force" flight over South Korea. This creates poor optics and has zero impact on North Korea's decision making process.