The Su-35 may have a few new tricks to perform at MAKS 2017, but does the jet represent "peak fighter maneuverability" based on current air combat trends? 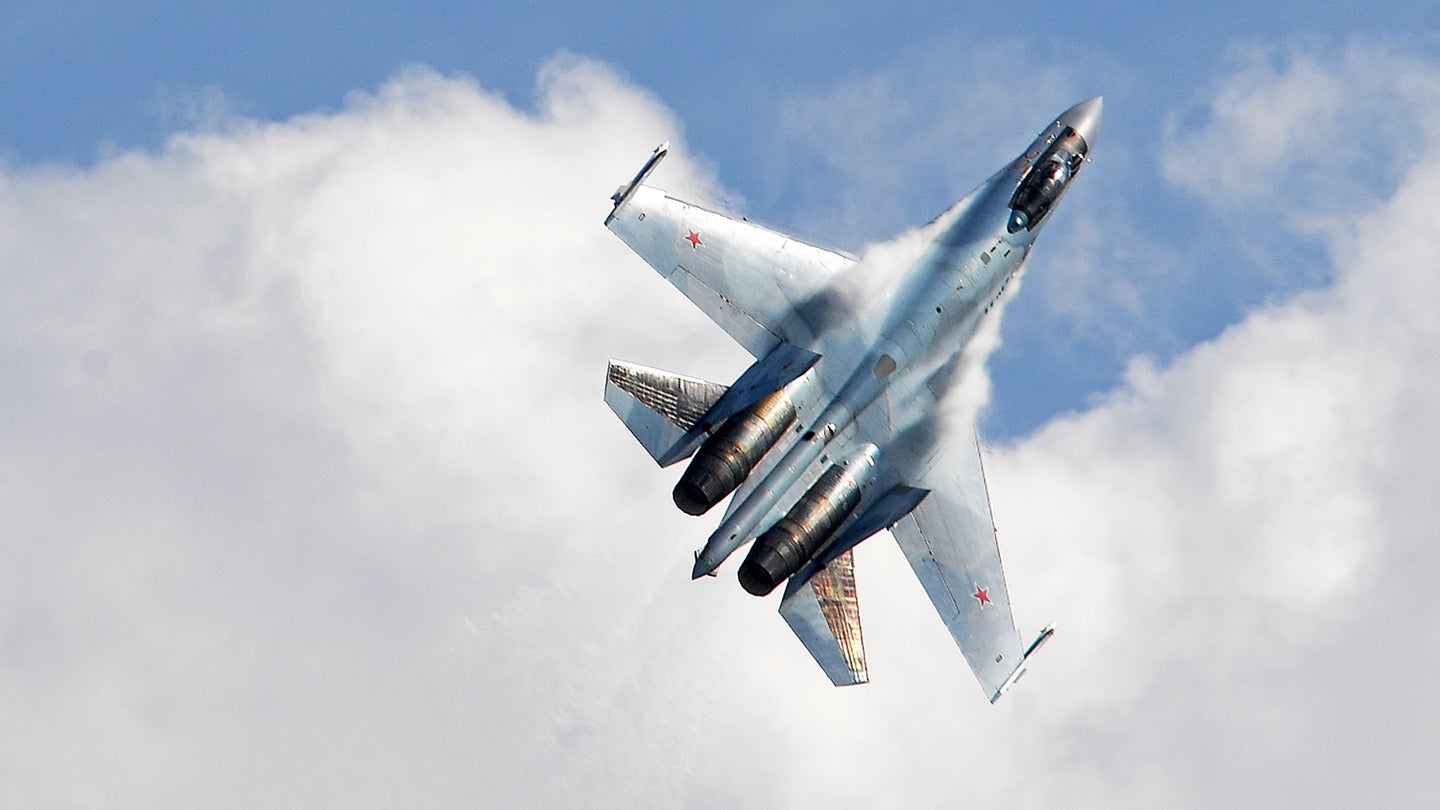 Russia's biannual marquee air show and weapons expo (referred to a MAKS) is about to kick off outside of Moscow and it never disappoints when it comes to aerial acts. In recent years, the star of the show has been the Su-35, Russia top-of-the-line Flanker derivative that features a digital fly-by-wire flight control system, three dimensional thrust vectoring nozzles and uprated AL-41F1S engines pumping out roughly 32,000 pounds of thrust each. All this adds up to an aircraft capable of astonishing aerial feats, regardless of their relevancy in most modern air combat scenarios.

In 2015, the Su-35S did some awesome maneuvers at MAKS as well. I posted on the jet's unique flying abilities at the time and the gif I made went viral. People were just amazed a fighter aircraft could accomplish such maneuvers, and especially an operational one as big as the Su-35, which weighs over 40,000 pounds with its tanks empty and stores stations vacant.

Those are some amazing maneuvers that seem to defy the laws of physics at times, and you have to give it to the Russians, they make the best air show aircraft around bar none. But not that much of the Su-35's acrobatic capability is relevant when it comes to modern air combat.

Being able to maneuver at the post-stall end of the envelope may be an attractive capability when taking on a single aerial opponent within visual range—one that is willing join in a dwindling speed, "groveling" knife fight. But many just won't, as they are trained to engage in a "rate fight" not "radius fight" to maximize the positive attributes of their aircraft and minimize the negative ones. But either way, an advanced Flanker pulling off post-stall tricks turns into one big vulnerable target hanging out in a highly depleted energy state when other enemy fighters are present.

This type of extreme super-maneuverability holds less value than it did a decade or so ago when many western fighter aircraft still lacked a high-off boresight (HOBS) short-range air-to-air missiles and a helmet mounted sight for cueing those missile towards aerial targets far off the aircraft's centerline.

Today most of these aircraft now have these systems, and the best HOBS missiles, like the latest iterations of the AIM-9X, are able to engage the enemy even when they are located over the pilot's shoulder. The pilot turns their head, and the missile's seeker turns too. When their eye is pointed at the target, the missile will lock on if it can and the pilot can then fire the missile and take evasive action. The latest variants don't even require the missile's seeker to be locked on before launch, instead a data-link guides the missile towards the target and then the seeker locks on once pointed at it. In other words, who wins and who loses during within visual range combat is no longer dictated by who can "point their nose" at the enemy first.

And of course, air show performances must be taken with the proverbial grain of salt. Once you add a practical fuel load and some weapons to any combat aircraft, its agility quickly erodes. Also, the routines performed are full of carefully tested and choreographed "edge of the envelope" sequences, many of which are flown by highly experienced pilots. So it's not like the guy or gal up there has 200 hours in the jet and is chasing down another aircraft over a war zone and pulling these maneuvers off on the fly to make a kill.

Still, the Su-35, and many other Russian aircraft, are incredible crowd pleasers, but they are far from being just dancing bears. When paired with experienced aircrews and the right tactics, and considering that roughly 2.5 Su-35s can be bought for the price of a single F-35A, not to mention that they are already being actively exported, the type is a threat to be concerned with.

Video of the Su-30MKM, which uses a similar 3D thrust vectoring setup as the Su-35:

But regardless of what you see on youtube or on some Flanker obsessed websites, these aircraft stand little chance of surviving an encounter with similar numbers of F-22s or F-35s. And comparing them to 5th generation western fighters really isn't fair to begin with. But rules of engagement in some scenarios, or when fighting over a tightly compacted battlefield, mean that there is no absolute guarantee that these types of aircraft will never make it to the merge with the F-35 or F-22.

The F-35 in particular may be vulnerable. Considering the Lightning's limited internal missile carriage capability, just four air-to-air missiles at this time, a formation of F-35s could become overwhelmed with targets, especially during long-range expeditionary operations against a near peer state foe. Running or standing their ground is not as good an option as it is for the F-22 as the F-35 lacks the rear-hemisphere low-observability that the F-22 possesses, nor its agility or ability to supercruise at high speed out of the combat arena.

When it comes to other 4th generation fighters, but less so for ones equipped with modern active electronically scanned array (AESA) radars, the Su-35S is a much larger threat even in the beyond visual range combat environment. Within visual range the jet should be feared, but once again, its super maneuverability is not highly relevant in a multi-aircraft engagement, and tactics are developed to degrade its slow-speed performance advantage.

Above all else, when any US or allied aircraft are operating in networked battlespace backed by various strategic intelligence, surveillance and reconnaissance (ISR) and command and control assets, as well as other "force multipliers," their lethality and survivability improves exponentially no matter what opponents they face. But there are also vulnerabilities in relying too heavily on lumbering support assets or complex communications networks to win the day.

With this in mind, for current fighters, a good degree of maneuverability is still a good thing to have, but new designs would likely be better off with trading it for other key advantages. In fact, dropping the whole fighter moniker and mission set altogether seems like a good idea.

I have been a proponent of throwing maneuverability requirements out the door entirely for future manned assets. The ability to carry far more fuel and thus more range, have lower observability (better, wider-band stealth), larger and more capable internal electronic warfare systems, more expansive missile magazines (especially being able to carry missiles with far longer ranges than what is available today) and in some cases enhanced supercruise capability would be far more advantageous than the ability to turn harder or to tumble around at zero forward airspeed. Additionally, the coming age of air-to-air lasers, which will be defensive in their application at first, is also likely to make slow-speed super maneuverability irrelevant and being able to avoid initial detection will have greater importance than ever.

The truth is, manned platforms, for many missions, including some counter air ones, are increasingly irrelevant for high-end combat environments. As many of our readers know, I would immediately take the pilot out of the equation totally for many mission sets and unleash a quantum leap in air combat capability altogether via fielding scores of advanced unmanned combat air vehicles. Agility and speed come very low on the list of capability priorities for such a system, with long-range, modular adaptability, affordability, broadband stealth and especially the ability to act as a networked and highly redundant autonomous swarm filing out the top of the list.

The great F-35 agility debate may also come to mind here. The F-35's ability to maneuver as good (if not better) as a 4th generation fighter is an issue because it was something that was promised and repeatedly touted by the aircraft's manufacturer throughout the aircraft's development, and that goal impacted its design and overall capabilities. Considering its magazine size, stealth and speed limitations, it needs a certain degree of agility to survive in the within visual range environment for the missions that will be thrust upon it.

As for the F-35's own performance at the Paris Air Show this year, something the aviation press seemed to swoon blindly over, I thought it looked about right for what we knew about the aircraft previously. Some claims from raving reviews seemed to be accurate and some claims from harsh critiques also seemed to be accurate. In the end the truth usually lies somewhere in the middle. And once again, this was a canned air show performance flown by a Lockheed test pilot, not a real-world combat simulation of any type.

What was certain of the F-35's showing in Paris was that Lockheed's PR blitz worked, with mainstream press quoting contractors' soaring claims with unabated glee—never seeming to contemplate the fact that these were the same people who stand to make literally hundreds of billions in revenue from the aircraft. In the end I really wasn't too disappointed with the jet from the videos I saw, it was clearly operating at the very edge of its capabilities and if anything else, it was a ballsy move by Lockheed. But I was let down many reporters who should have challenged contractors' claims and unabashed hyperbole, or at least invited other voices to chime in with contradictory perspectives.

On a personal note, I have heard directly from crews from both branches that have flown against the F-35 in training maneuvers or are close (as in very) to the program. Their comments have ranged from "good enough I think" to "she's a pig but who cares I don't plan on seeing the enemy up close in it" to "we need new jets OK, and this is what they are giving us." I have never heard a rave review directly from anyone about the F-35's kinematic performance or agility. On the brighter side, by all accounts the pilots say the airplane is easy to fly generally speaking, which is great because it allows them to concentrate on the tactical aspects of the mission and not on aviating. The avionics are all also impressive, some more than others, when they operate properly.

Back to Russia and their super maneuverable jets. The Kremlin claims it is going to be designing and testing multiple new tactical fixed wing aircraft in the not so distant future. If this is fiscally even possible is a debate worth having, but regardless of this aspect of Russian officials' claims, if they do indeed test even one new tactical jet in the foreseeable future, it will be interesting to see if they stick to their super maneuverability playbook or go for a much more balanced design approach.

We have begun to see such a philosophy in the Sukhoi T-50, where some stealth elements and advanced sensors are mixed with thrust vectoring and high-maneuverability, but the aircraft cannot move around the sky like the Su-35. China has gone for range and low observability over raw agility as well with its J-20 stealth fighter/interceptor, and the country's smaller J-31 doesn't feature thrust vectoring or hyper agility either. If the US moves forward with a 6th generation fighter, by all accounts it will likely also put a major premium on range and low observability over nimbleness.

If these trends are any indication, it is likely that we have reached peak manned fighter low-speed agility with the Su-35.