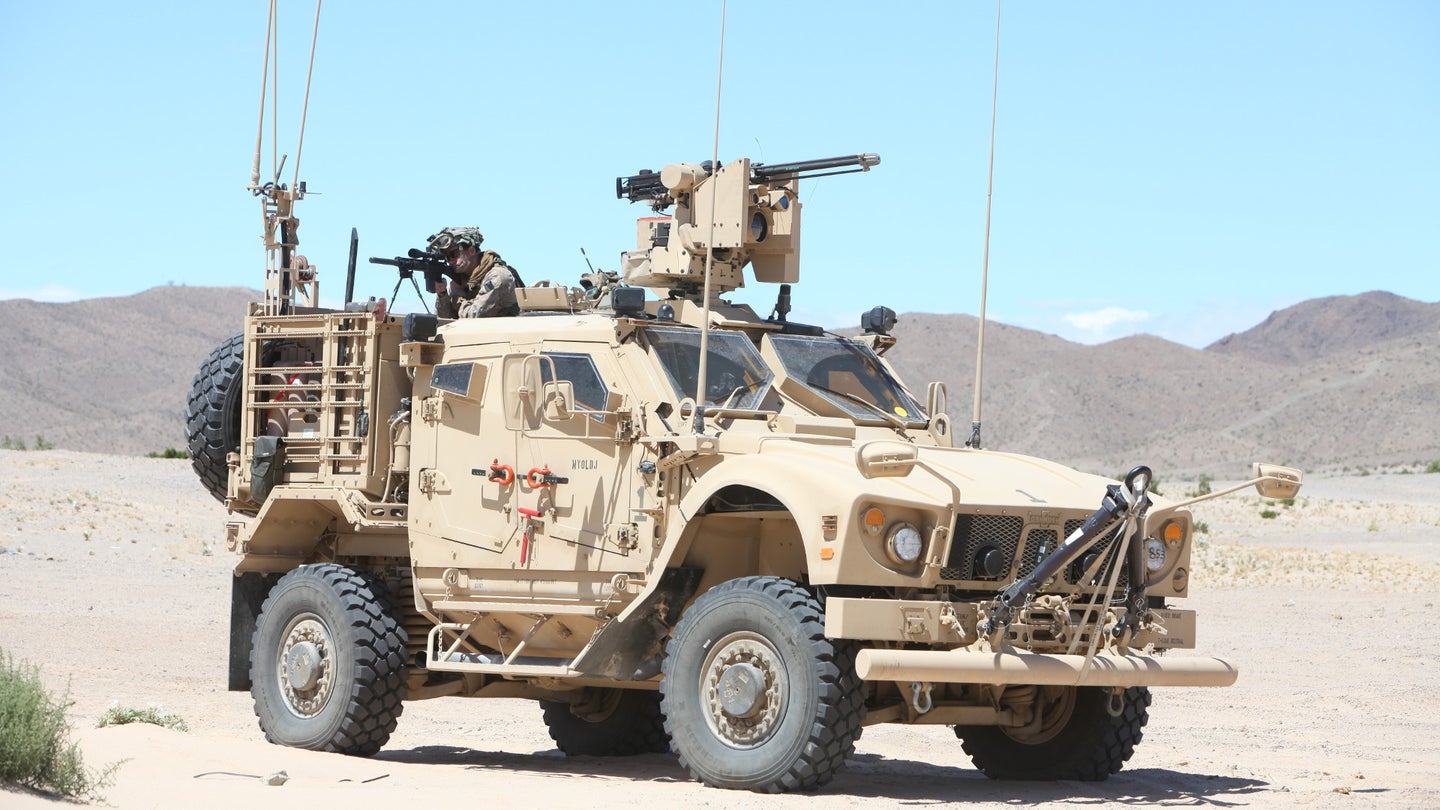 U.S.-backed Syrian forces have been fighting for weeks to liberate the strategic city of Raqqa from ISIS terrorists, who claimed it as their de facto capital. Now, new images suggest that American or other coalition special operations forces may be taking a more active role in the offensive that could put them nearer to the actual fighting and at increased risk of taking casualties.

On July 17, 2017, pictures began to appear on social media of flat bed trucks carrying M1245A5 M-ATV mine protected vehicles. On July 20, 2017, additional images emerged of another convoy with more M1245s, as well as a number of up-armored Caterpillar D9 bulldozers.

The M1245 is the U.S. military designation for the special operations forces-specific model of the Oshkosh M-ATV. These vehicles are easily distinguished from other American types by the enclosed, protected cargo compartment at the rear of the vehicle. The A5 denotes the version equipped with the M153 Common Remotely Operated Weapon Station (CROWS) II, which allows troops inside to fire the top-mounted weapon – most commonly a .50 caliber M2 machine gun – without exposing themselves to enemy fire. It also gives them thermal imaging surveillance capabilities.

Oshkosh derived its Light All Terrain Vehicle, or L-ATV, from the M-ATV. In 2015, this vehicle won the competition to become the U.S. military's new Joint Light Tactical Vehicle, which is set to replace a significant number of iconic Humvees across all branches of service. Though they look similar, the L-ATV is significantly lighter than the M-ATV and is better suited to more general use in various settings.

There have been no confirmed reports of the U.S. military or its coalition partners supplying M-ATVs of any type or any vehicles with the M153 CROWS II to the Syrian Democratic Forces (SDF), a group that includes both the Syrian Arab Coalition and the Kurdish People's Protection Units, better known by the acronym YPG. Unnamed U.S. officials told Defense News that these vehicles were not part of any U.S. aid to the rebel coalition, which has previously included light armored vehicles and other heavy weaponry.

Of course, the presence of coalition special operations forces in and around Raqqa is hardly surprising. American special operators have been actively conducting raids against ISIS and other operations in support of the SDF in Syria since 2014. In March 2016, members of the U.S. Army’s elite 75th Ranger Regiment began making very public shows of force in an apparent attempt to keep the peace between SDF and Turkey, who views the Kurdish elements as dangerous terrorists.

However, the M-ATVs and bulldozers did begin to appear as reports emerged claiming that U.S.-supported rebels were making especially slow progress against the ISIS defenders. U.S. military officials were quick to push back against these assertions.

U.S. Army Colonel Ryan Dillon, the top spokesman for Combined Joint Task Force-Operation Inherent Resolve, which is leading the coalition fight against ISIS, took to twitter to make clear that the SDF had not halted its operations. He added that the rebel forces had already captured more than 13 square miles of territory from the terrorists that week.

“We knew going in that Raqqa was going to be very hard,” Pentagon spokesman U.S. Navy Captain Jeff Davis then told reporters on July 18, 2017. “There is not a consistent degree of progress in any military campaign, it’s a stop and go effort by its very nature.”

But expected or not, the truck loads of vehicles seem to confirm reports that resistance has been stiff. On top of that, as Iraqi forces found in Mosul, ISIS fighters continue to make extensive use of deadly booby traps and improvised explosive devices, including massive vehicle-based suicide bombs.

There have been reports of motion-activated IEDs, as well. Common portable or vehicle-mounted jamming equipment may not defeat some of these designs, which began to appear in Iraq as far back as 2011, if they do not use radio remote controls as triggers. All of this would make for slow going on the part of the attackers.

It would explain the inclusion of bulldozers in the convoy. In the battle for Mosul, and elsewhere in Iraq, the armored construction equipment became an essential part of operations, able clear traps and other obstacles relatively quickly to allow friendly forces to advance. They were also sturdy enough to shield troops from IED blasts and block car bombs from getting to their target.

“There can be no liberation without the bulldozer,” 19-year old Iraqi Private Mohammed Ali al-Shwele told The Washington Post, which wrote a detailed profile on the vehicles and their use in Mosul, in May 2017. The 19-year old bulldozer driver had become a viral sensation after sharing a cellphone video of himself getting rammed by an explosive-laden car.

The M-ATVs would be similarly essential for special operators working closely with SDF forces in the city and an indication of the increased risks they face. Early on in the Mosul offensive in 2016, other M1245A5s had quickly appeared – some humorously bearing the names of Disney “princesses,” including Elsa from Frozen and Mulan from the film of the same name – along with American advisers. As time went on, the elite troops repainted many of the sand-colored armored trucks black to help blend in with their counterparts from the Iraqi Counterterrorism Service.

It makes perfect sense that special operations forces would want to be as close as possible to the local units they are supporting. The proximity would speed up the process of calling in air or artillery strikes, as well as helping make sure shells and bombs fall on the right targets. If nothing else, being on the ground would simply give advisers a better sense of the battlefield and the immediate needs of SDF units.

This would only be the latest similarity between American involvement in the liberation of Mosul and the offensive into Raqqa. In March 2017, U.S. Marines set up a secretive artillery base in Syria. Before operations in Mosul kicked off, Marines deployed to a very similar site south of the Iraqi city, before the U.S. Army took over the mission.

Since then, there have been reports since that the number of these emplacements may have grown or that American artillery crews have moved closer to Raqqa ahead of the liberation campaign. The U.S. military has even released official photos and video, including a slickly-produced trailer of sorts, of these troops in action with their 155mm M777 howitzers.

Some of this imagery showed the Marines were employing the low-cost XM1156 fuze kit, which turns regular high-explosive shells into GPS-guided projectiles. Other forces may be employing the High Mobility Artillery Rocket System (HIMARS) and its GPS-directed 227mm rockets, which has already been a popular weapon in the fight against ISIS.

GPS-guided artillery in general has been an important part of American operations in both Iraq and Syria, as it is both accurate and able to find its mark in through dust, smoke, and storms. In addition, unlike air strikes, which can be hampered by low clouds or poor weather, artillery on the ground can generally provide fire support in spite of these adverse conditions.

Pictures and video from local sources have also shown Marine supply convoys moving back and forth in northern Syria under heavy escort in apparent support of these positions. These logistical elements almost certainly have been ferry cargo to dispersed units from a growing number of American outposts in the country. Many of these sites are large enough to accommodate fixed wing cargo aircraft, including the U.S. Air Force's C-17s and C-130s, as well as helicopters.

Officially, none of the U.S. troops are technically involved in directly fighting ISIS in either Iraq or Syria. But there is substantial evidence that the definition of “direct combat” has gotten stretched in Iraq and Syria. Photographs and video have shown special operations forces snipers and U.S. Army mortar teams, among other elements, working very closely with Iraqi forces in Mosul.

“Fortunately, they're not engaged in direct ground combat themselves,” Lieutenant General Stephen J. Townsend, head of CJTF-OIR, still insisted to reporters on July 11, 2017, speaking about coalition forces in both Iraq and Syria. “They're advising. They're firing artillery and rockets, and they're advising their partners.”

Whatever the definition, it appears that special operators may now be moving at least physically closer to the actual fighting in Syria, running an increased risk of finding themselves further entangled in the country's fluid political situation where a variety of armed groups with differing agendas are battling each other.