A fix for the F-35A's computer and new tests on the T-45 could help curb reported hypoxia incidents, but it's hard to say for sure. 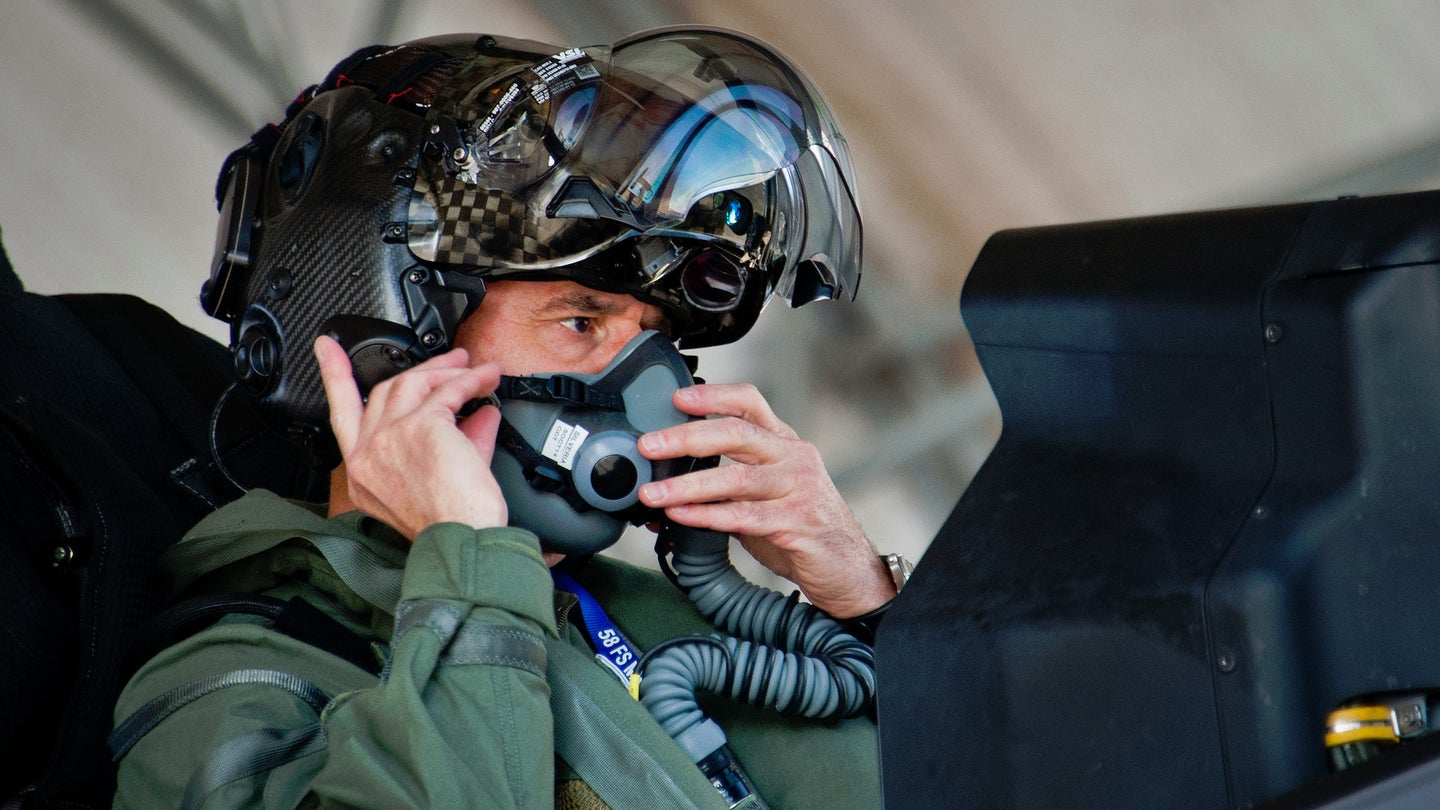 The U.S. Air Force and the U.S. Navy are still trying to figure out what’s choking pilots in a number of different aircraft following months of reported incidences of “hypoxia-like” symptoms. The Air Force is looking to change the software on some of its F-35A Joint Strike Fighters to help address the issue on the aircraft, while the Navy appears to be narrowing its investigation into similar problems with the T-45 Goshawks to focus on potential contamination of the airflow.

On July 18, 2017, the F-35 Joint Program Office (JPO) told Defense News that F-35A jets from the 56th Fighter Wing at Luke Air Force Base in Arizona would get an update for the aircraft’s computer-controlled onboard oxygen generation system (OBOGS). The change would modify the algorithm the system uses to determine the appropriate oxygen concentration for the pilot depending on the situation.

However, “there is no indication the delivered oxygen concentration was a contributor to any of the recent events,” Brandi Schiff, an F-35 JPO spokesperson, added to Defense News. Since the Air Force is still unsure of the exact cause or causes of hypoxia-related incidents at Luke, the software update may or may not ultimately help.

On June 9, 2017, the 56th Fighter Wing stopped flying its Joint Strike Fighters after the unit had five separate hypoxia-like incidents beginning the previous month. It later emerged that there had been 10 additional instances among Air Force F-35 pilots dating back to 2011. On June 21, 2017, the 56th’s commander, Air Force Brigadier General Brook Leonard, ordered his fliers back to work after implementing a number of new safety protocols, including limiting how high pilots could fly and requiring the use of multiple backup oxygen systems.

Despite that the recent hypoxia events have only occurred in jets flying from Luke, at least that we know of, the Air Force has decided to ultimately install the software patch on all of its Joint Strike Fighters. Defense contractor Honeywell, which makes the F-35’s OBOGS, is in charge of crafting the new code and devising a plan to get it out to the rest of the fleet.

The JPO explained to Defense News that it had no idea how much the change would ultimately cost, or who would pay for it. Depending on the wording of existing contracts, Honeywell could have to perform the fix at no cost. On top of that, it could take up to two years before all of the Air Force’s F-35As got the update.

“Cost estimates are still being developed,” Schiff told Defense News. “The current time estimate is 24 months, but the F-35 joint program office … is pushing Lockheed Martin to accelerate the fielding of this new firmware.”

The extended time frame could point to possible separate problems with using the F-35's Automated Logistics Information System (ALIS) as the single manager for future software changes, as well as other potential dangers with that arrangement. The ALIS computer acts as a loader for much of the stealthy jet’s software and its associated networks provide a centralized point of contact between the aircraft, their operators and the manufacturer, Lockheed Martin.

If the updated OBOGS firmware does indeed go out using the system, it could expose a potential vulnerability to cyber attackers, who might be able to hamper flight operations by disabling or disrupting the OBOGS after finding a way to break into the network in the future. If anything else, it is a reminder that cyber attacks on the F-35's ALIS could target industrial controls that run tertiary components of the jet that are not involved with its combat systems but are just as critical to mission success.

Regardless, since the oxygen concentration has not been conclusively linked to the issue, this patch won’t stop the Air Force from continuing to exploring the problem with regards to the F-35As at Luke. On July 19, 2017, a team of officials from the JPO, the Air Force’s own F-35 integration office, and the 711th Human Performance Wing, arrived at the base to begin a “heat exhaust study,” spokesperson Air Force Major Rebecca Heyse told Defense News. Situated at Wright-Patterson Air Force Base in Ohio, the 711th maintains the service’s OBOGS laboratory to help study and address hypoxia episodes.

Though there were no details about what this would necessarily entail, it seems likely this will involve gathering data on how the F-35’s OBOGS brings in and processes the air. As on many other aircraft, the Joint Strike Fighter’s system bleeds off air from the engine before filtering it and passing it to the pilot’s breath mask. A problem with the design or with how the system is repaired might allow in particles that could limit or contaminate the oxygen flow, giving fliers hypoxia or similar symptoms.

At the same time, the Navy is reportedly conducting a similar investigation into the flow of air through the OBOGS on the T-45. The service effectively grounded the fleet of jet trainers in April 2017 after it became public that instructor pilots were refusing to fly due to reports of hypoxia. Instructors are still allowed to fly below 5,000, but the issue has largely halted sorties critical to training new Navy and Marine Corps pilots.

Again, it’s not clear why the T-45 is apparently choking crews or why there has been a dramatic spike in reported physiologic episodes among Goshawk pilots since 2015. In 2014, there were only 12 such events. The next year there were 27, with this number rising to 38 in 2016. Before the Navy instituted its flight restrictions in April, there had already been 21 hypoxia-like cases for the year.

Now, the Navy is focusing on the potential contamination of the air coming from the aircraft’s Rolls-Royce F405 engine. This came after a review concluded that the arrangement was “not equipped to continuously provide clean, dry air” to the OBOGS, according to Aviation Week, which added that the service would begin testing air samples for toxic material by the end of July 2017.

In addition, Aviation Week offered a detailed explanation of how the T-45's particular OBOGS works and how contaminants might work their way in:

The problem is that there are countless opportunities during the OBOGS cycle for contaminants to enter the airflow. In the T-45, the bleed air from the compressor section of the engine flows through a cooling heat exchanger and enters the OBOGS, where it first passes through a heater, particulate filter and pressure reducer. The air is then directed to a sieve bed material loaded into two identical canisters. Each canister’s sieve bed material absorbs nitrogen, passing the concentrated oxygen to a mixing plenum—or box—and then to the pilot’s regulator and mask. The nitrogen absorbed in the sieve bed is purged from the system.

The ability of the OBOGS to produce usable oxygen depends on clean, dry air, delivered to the air crew in the right pressure and volume, flowing into the system. Moisture is a particular problem; due to the sieve bed’s high affinity for water, any contaminants trapped there could be exchanged for moisture and then released from the OBOGS into aircrew breathing air.

At the same time, the Navy hopes to get the jets back to full operation using its own “mitigation measures” akin to those the Air Force instituted at Luke for the F-35s. “These mitigations monitor the breathing gas and alert and protect our aircrew, as well as incorporate new maintenance procedures to ensure the systems are clean and working properly prior to flight,” U.S. Navy Vice Admiral Mike Shoemaker, commander of Naval Air Forces, said, according to Aviation Week.

Rolls-Royce said it was working closely with the Navy on the issue, but that possible contamination of the airflow from the T-45’s engine was only one of “many potential root causes.” There is no indication yet as to why the air from the engine would have suddenly become a problem in the last two years or why hypoxia has not been an issue among the many other operators of BAE’s Hawk family.

Beyond the F-35A and T-45 fleets, there has also been a notable and similarly unexplained increase in reported hypoxia among the Navy’s F/A-18 Hornets and EA-18G Growlers in recent years, too. In a guest commentary for The War Zone in April 2017, Commander Joe "Smokin" Ruzicka, who had spent time as the Weapon System Officer in the F/A-18 Hornet and as the Radar Intercept Officer in the F-14 Tomcat, said pilots were “getting a good old fashioned run around as no current solution for repairing [the Hornet’s] OBOGS currently exists.”

Since 2010, Ruzicka said the Navy had blamed the bulk of recorded hypoxia episodes in Hornets and Growlers on breathing contaminated air or a loss of cockpit pressure, but had yet to find a “smoking gun.” There has been no appreciable movement on the issue with regards to the F/A-18s and EA-18Gs since then, even though the service has now linked at least four deaths to oxygen deprivation. Pilots' luck in escaping these situations unharmed may have already run out.

In June 2017, Military.com reported that the service's latest "solution" for Hornet and Growler pilots would be to issue each aviator a Garmin Fenix 3, a $450 wristwatch that can measure air pressure and altitude. Based on a preset configuration, the watches would alert pilots if things inside the cockpit got to a dangerous point, providing another early warning tool before any actual physiologic event. This, of course, does nothing to actually address the problem and some engineers at the Naval Air Systems Command reportedly warned that the Garmins might only provide "false sense of security."

But this all gets at the core issue with determining the cause of and fixes for reported hypoxia cases. Aircraft and individuals perform differently under different conditions and what impacts one pilot may not affect another, or may do so in a different way. Recreating the events in a safe, controlled environment on the ground is difficult.

"It’s like chasing a ghost," U.S. Navy Rear Adm. Mike "Nasty" Manazir, the Deputy Chief of Naval Operations for Warfare Systems and a career Navy pilot, told members of Congress during a hearing in February 2017. "You can’t figure it out, because the monitoring devices that do this are not on the airplane."

If the problem continues to expand and impact more aircraft types, the Air Force, Navy, and other services will have little choice but to keep looking for solutions no matter how hard they might be to find. Ignoring the problem simply isn't an option.