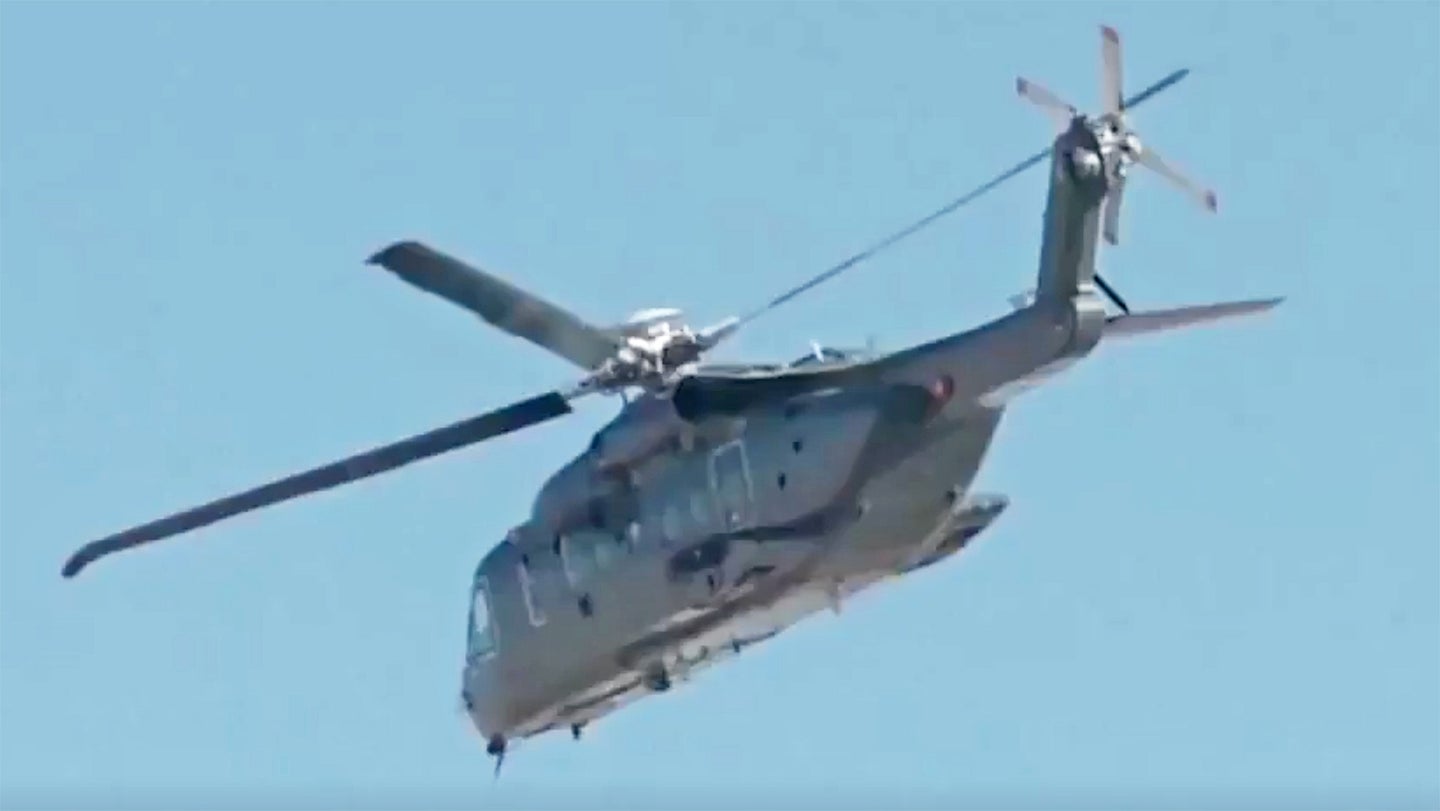 A new video has surfaced that shows the same unmarked, gray S-92 Helibus that we identified last March in northern Syria, but this time it was seen supposedly flying over or very near the Islamic State's defacto capital of al Raqqa. Similar helicopters were originally spotted in Djibouti in 2015, adding to the mystery of who owns and operates them, especially considering the type is not officially in the Pentagon's active inventory.

The video, which was posted on social media, cuts to V-22 Ospreys, which are also known to be highly active in the region. The Ospreys ferry US special operations forces, US Marines, and Syrian Democratic Forces (SDF) fighters, which are primarily made up of Kurds, around eastern Syria to battle zones and forward operating bases. With the offensive to rout ISIS from al Raqqa finally underway, it only makes sense that the Ospreys are now flying along the outskirts of the the besieged city. As to the exact mission of the shadowy S-92, we still don't know.

After our last posting pinpointing the aircraft in Northern Syria, near the Syrian-Turkish border, numerous reports came in with photographic evidence showing the same aircraft, or another with the identical configuration and paint job, flying around the southeast United States. In particular, the aircraft was spotted at Lafayette Regional Airport in Louisiana in early March, and a couple weeks later at Raleigh-Durham International, North Carolina.

In both sightings, there were no discernible markings on the aircraft, but it turns out that an identical S-92 was photographed around the same time with a registration temporarily applied. That registration number is N992SK. This same number was worn by a blue and white S-92 that operated out of Malta from around 2012, while the US was still embroiled in the Libyan conflict, before it was spotted without the tail number in Erbil, Iraq in 2015.

Since then the helicopter appears to have been repainted in the gray tactical scheme we recognize today. Before and after the paint job, the aircraft's registration was and still is assigned to Leasing Source LLC, which once had its address in Helena, Montana, but is now listed in New Iberia, Louisiana.

The company shares its address and an office building with a hangar and helipad attached with Helicopter Management LLC. The building is set near Acadiana Regional Airport in Louisiana, and right by a large Halliburton campus and the home of Bristow Helicopters US—a major S-92 operator.

Both of these companies—Helicopter Management LLC and Leasing Source LLC—and roughly a dozen others are owned by PHI Inc. we discovered through a SEC filing from 2010. PHI Inc., which is a well established helicopter services provider, describes itself on its website as "the total helicopter company," and details its history and current operations as follows:

The Company's core business consists of offshore operations in the energy basins around the world. The highly skilled staff of pilots and maintenance technicians gives the company great depth in all areas of operation. The PHI team is composed of highly skilled, dedicated, hardworking and loyal employees.

PHI has a long history of operating in the Global Marketplace. In addition to operations in the United States, the company has operated in 43 foreign countries and continues to operate for customers across the globe. PHI helicopters fly 250 miles into the Gulf of Mexico and to locations 200 miles offshore in international waters. PHI's Headquarters are in Lafayette, Louisiana USA.

PHI provides service to the Healthcare industry through its Air Medical Group. Since its inception in 1981, PHI Air Medical Group has grown from one medically equipped helicopter to over 60 helicopters with state of the art medical interiors designed. The current customer list spans the United States and includes many premier health care organizations.

The company is considered to be an industry leader in maintenance, technology, and overall operations. The overhaul and maintenance facility based in Lafayette, Louisiana is considered by many to be the premier facility in the world because of its technology and experienced staff. PHI employees conduct routine maintenance and repair work; completely overhaul engines and airframes; operate a state-of-the-art painting facility; study and engineer new parts and lubricants; research new procedures and develop new techniques.

As the offshore oil and gas industry moves further out into the Gulf of Mexico, the air medical industry gets more advanced and as international arenas open, PHI plans to be able to meet the needs of customers in any location. PHI provides customers with the safest, most reliable helicopter transportation in the world. As the industry progresses into the 21st century, PHI is primed for any challenge."

Considering one of its handful of S-92 helicopters is flying in a chaotic and excessively dangerous war zone, the "primed for any challenge" mantra seems to be quite accurate. Also note that the company's major maintenance facility is at the same airport where the gray S-92 was recently spotted. Apparently employees at the airport were told not to photograph it when it arrived according to one spotter.

But just because we know who owns the helicopter, or helicopters, we still don't know exactly who is using them, or even flying them. It could very well be that PHI Inc. leases these helicopters to an agency or to the military, and those governmental institutions fly and operate them. On the other hand, PHI Inc. could be providing "end-to-end" services with the lease, which would include maintenance and crews, including pilots.

Considering the massive helicopter capacity of the US military, contracting out a single or handful of S-92s sounds odd. But for an intelligence agency or the State Department, or even for another country's military that has far less helicopter capacity than the US military does, outsourcing such a capability set may make more sense than not. Maybe the US government contracted the helicopter on behalf of the SDF, which have zero airlift capabilities of their own—not even for their most elite commanders.

Even through the mysterious S-92 may seem a little less mysterious now, it still hasn't given up all its secrets. But considering that the battle for Raqqa has just begun, and what comes after could be more perilous than what came before, it won't likely be the last we will see of the shadowy chopper.