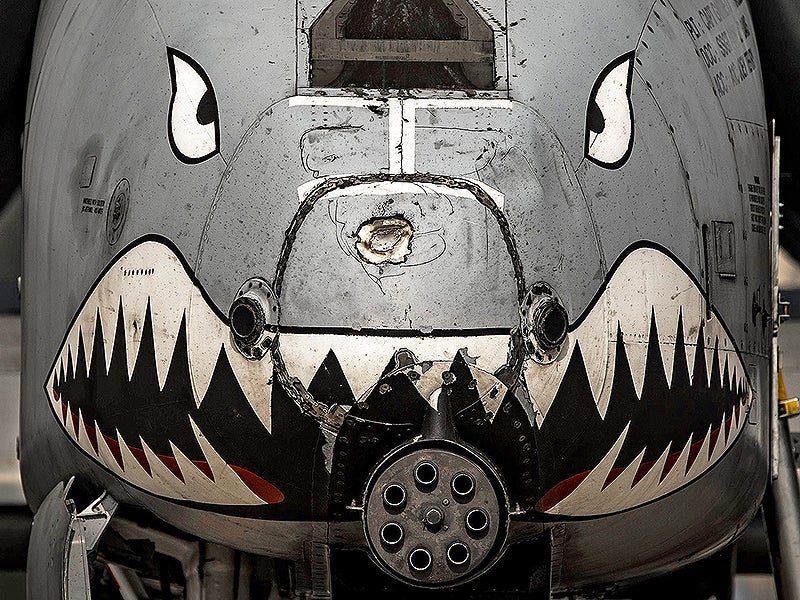 The U.S. Air Force has long weathered criticism that it looking to retire the venerable A-10 Warthog without an adequate replacement. Now, despite statements to the contrary, the service appears to have confirmed that it not at work on a dedicated successor, or is deliberately slow-rolling the process.

On July 16, 2017, in chat with Aviation Week, Air Force Chief of Staff General David Goldfein offered updates on the status and future of the A-10 fleet, as well as progress toward a new, CAS-focused aircraft, commonly referred to as A-X. In the interview, the service’s top official ran through the usual talking points, explaining that other, multi-role platforms can perform the critical close air support (CAS) job, as well as blaming budget cuts and caps for difficulties in obtaining a direct replacement for the Warthog.

As such, Goldfein said that the Air Force was “not yet” actively working on developing A-X, according to Aviation Week. When asked if this meant the service might ultimately retire the A-10 without a purpose-built replacement, he said “maybe.”

Though not surprising, these remarks directly conflict with comments that General Mike Holmes, then Deputy Chief of Staff for Strategic Plans and Requirements, made at an Air Force Association breakfast on April 7, 2016. At that gathering, the officer, who is now head of Air Combat Command, stated unequivocally that the Air Force was in the middle of an active process to lay the groundwork for an all-new CAS-focused aircraft.

“My requirements guys are in the process of building a draft-requirements document for a follow-on CAS airplane,” Holmes explained. “I have seen a draft of it, it’s out for coordination. It’ll go to the chief [of staff] sometime this spring, and then we’ll fold that into the larger study we’re doing on the future of the combat air forces.”

As a side note, shortly after seeing those comments, I submitted a Freedom of Information Act request for various records regarding this requirements drafting process. As of March 2017, the Air Force was still processing that request.

In July 2017, then Air Force Chief of Staff Mark Welsh described his ultimate desire for what he called a "flying coke machine" to replace the A-10. Though his concept was vague and seemed to imply something akin to existing proposals for a "flying arsenal ship," possibly using unmanned stealthy drones, as well as an entirely revamped set of systems and procedures for conducting CAS missions, the suggestion seemed clear that the service was actively looking into what might come after the Warthog.

Now, since Aviation Week paraphrased many key comments, there is possibility that Goldfein meant that there was not yet an active process in translating those draft requirements into an actual A-X program. It is also possible that Holmes’ office created generalized requirements and detailed various options to replace the A-10, and that the service decided to pursue alternatives to an A-X in the near-term. One of these recommendations could have been the service’s light attack experiment, also known as OA-X.

However, this all seems highly unlikely, especially since Aviation Week phrased their question broadly about whether "the service is taking steps to develop" an A-X aircraft at all. Slated to begin in July 2017, the existing OA-X demonstration project, which only involves aircraft significantly smaller and less capable than the A-10, could at best produce a partial solution. The Air Force says it would only ever expect to fly such a plane in an almost entirely permissive environments without significant enemy air defenses. As such, there is even talk about sending planes that perform well in those tests for a limited field trial in Iraq or Afghanistan.

On top of that, the Air Force has continually stressed that the OA-X evaluations do not include a commitment to buy any aircraft, despite Congress’ plan to insert money into the service’s budget to do just that. There’s similarly no indication that even if it does buy a light attack aircraft that it will treat these planes as fulfilling any existing A-X requirements. And despite repeatedly discussion its possible features, the service has also said time and time again that it has no money for an A-X of any description.

"We don’t think this would take that long to do," Welsh said of his "coke machine" idea back in June 2016. "We don’t think it’s that complicated of a design problem, (but) we don’t have the money to do it.

"So far I have read about this in the news. I have not actually seen a proposal on any of this that has come forward to me," then-Secretary of the Air Force Deborah Lee James said the next month, already implying the notional A-X was so much vaporware. "So it sure is pre-decisional. It hasn't been decided on. ... Where would we get the money? Not at all clear to me.”

What does seem clear is that whatever was in General Holmes’ requirements review, Air Force leadership has quietly decided not to pursue any portion that could be reasonably described as a dedicated Warthog replacement, at least for the time being. This would fit with the fact that we haven't heard much about  Air Combat Command's much-touted CAS Integration Group in months, though it is supposedly working on developing a "new" concept of operations centered on the F-16 Viper fighter jet and crews trained specifically for the CAS role.

This revelation seems almost certain to generate criticism from the A-10’s most ardent supporters in Congress, who have repeatedly blocked the service’s attempts to send the decidedly unsexy “blue collar” plane and its uniquely powerful 30mm cannon to the bone yard. In 2015, members of the House of Representatives added a detailed provision to a draft National Defense Authorization Act for the 2016 fiscal year that would have required the Air Force run a comprehensive test of a new close air support plane before retiring any A-10s. You can read the exact requirements here.

While President Barack Obama ultimately vetoed that spending bill, he did sign a Senate version into law that contained the same clause. Notably, it required the Air Force to submit a report on its findings to the House and Senate Armed Services Committees no later than Sept. 30, 2016. If such a study exists, its findings do not appear to have made it into the public domain.

It’s possible that the Air Force is hoping to wait until the results of a fly-off between the A-10 and the F-35 Joint Strike Fighter, before making any final decisions regarding an A-X. Long in the works, this comparative test could begin in 2018, according Air Force Brigadier General Scott Pleus, who runs the service’s F-35 integration office.

One of the longest standing arguments against the Warthog is that it simply cannot operate in high threat environments that demand a new, stealthy jet like the Joint Strike Fighter. General Goldfein seemed to allude to this in his recent interview with Aviation Week, while also highlighting the various platforms in addition to the A-10 that performed CAS in Afghanistan during his time as head U.S. Air Forces Central between August 2011 and July 2013.

“If we can start having a conversation about that family of systems, and not which one weapon system is the most important, we’re going to actually have a 21st-century close-air-support discussion,” the Air Force’s top office said. “Before we have any conversation about replacements ... we want to make sure that anything we talk about is moving us forward into new ways of doing business.”

But the A-10’s Congressional backers, especially Martha McSally, a Republican Representative from Arizona and former A-10 pilot herself, have made it clear they have no intention of supporting Air Force efforts to retire the Warthogs without a functional plan for their replacement. On the Senate side, Senator John McCain, another Arizona Republican, has also been an outspoken critic of the service’s plans, outright accusing General Welsh of being “disingenuous” on the issue in 2016.

These same legislators have already criticized the Air Force over its latest plan to begin cutting three of the nine Warthog squadrons in the near future. Lawmakers were quick to insert addition money into draft budgets for more new wings that the A-10 fleet desperately needs to keep up its availability rates and that would allow the jets to continue flying safely at least until 2040. Those issues already seemed to guarantee a new fight with Congress over the future of the aircraft.

With the Air Force now admitting it is not actively working on a true A-X replacement, the A-10 saga looks set to be as fraught as ever.