The Type 815's visit is a significant display of China's expanding naval capabilities. 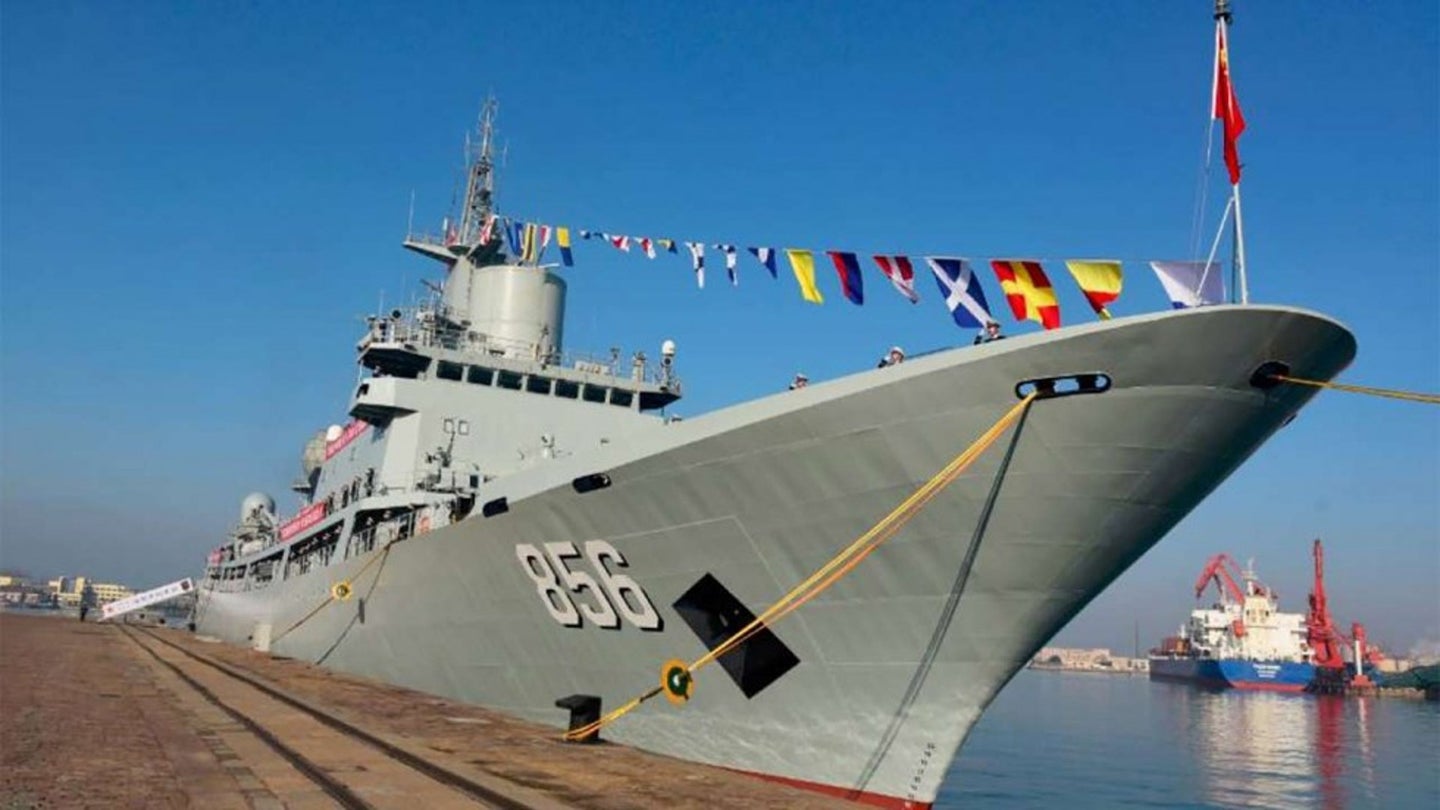 The People’s Liberation Army Navy’s (PLAN) significant and continued expansion, both in terms of advanced ships and vital infrastructure, is one of the best indicators of China’s push to become an international military power.  But, as most eyes were focused on the departure of Chinese forces for their new base in Africa, the country made another important naval move, discreetly sailing one of its most advanced spy ships near the United States for the first time ever, just in time for an important American missile test.

Some time on July 11, 2017, one of the PLAN’s six Type 815 North Star electronic intelligence-gathering vessels, China most advanced spy ships, arrived in international waters near the coast of Alaska, according to report by Epoch Times. That same day, the U.S. military’s Missile Defense Agency and numerous partners conducted the first ever test of the Terminal High Altitude Air Defense (THAAD) ballistic missile defense system against a mock intermediate-range ballistic missile (IRBM) from the Pacific Spaceport Complex Alaska in Kodiak.

Michael Kucharek, a spokesperson for U.S. Northern Command and the U.S.-Canadian North American Aerospace Defense Command (NORAD), told The Epoch Times that this was the first time a Type 815 had entered either command’s “area of responsibility,” which includes the coastlines of both the contiguous United States and Alaska. It was also the first time since 2015, when a PLAN task force moved through the Bering Sea as then-U.S. President Barack Obama toured Alaska, that any PLAN ships have transited near an American shoreline. It was unclear what the Chinese ship was actually doing at the time and the spy ship remained in international waters, according to Kucharek.

However, it seems very likely that the spy ship was there specifically to watch the THAAD test. Though its unclear whether or not the North Star-class ships have the radars necessary to track missile flights, the vessel off Alaska surely vacuumed up a lot of information from electronic emissions, including signals from data links and other communication equipment connecting the various components of the THAAD battery, and from that battery to America's greater missile defense "ecosystem" as well. The X-band AN/TPY-2 radar, and its emissions radiated during an engagement was also likely of great interest to the Chinese.

This could provide Chinese analysts with a more nuanced picture of how the particular system, as well as the broader U.S. military missile defense apparatus, works as a whole, exposing weaknesses well beyond any deficiencies with the interceptors themselves. In particular, the signals could expose vulnerabilities to jamming and other electronic warfare not just in THAAD, but elsewhere in the U.S. missile defense shield's broader networks. There could be evidence of cyber security gaps that Chinese specialists could exploit, as well.

Of course, the North Star class, originally known as the Dong-Diao or “East Investigate” class, is hardly new. The PLAN commissioned the first ship, now called the Beijixing or “Polaris,” in 1999. It originally featured large parabolic antennas similar to Cold War-era spy ships such as the U.S. Navy’s USNS Vandenberg and the Soviet Navy’s Kosmonavt Yuri Gagarin, but at some point these gave way to radome-enclosed radars common to more modern designs.

While the Beijixing remained the only member of its class for more than a decade, since 2010, the PLAN has added another five of the intelligence ships to its inventory. The first four were an improved Type 815G subvariant. The Kaiyangxing, which just entered service in January 2017, is yet another version known as the Type 815A. We don’t know what particular ship was near Alaska earlier in July 2017.

Though historically tight-lipped about the Type 815s in general, the PLAN disclosed significant details about the class after commissioning Kaiyangxing. The Type 815A had a displacement of 6,000 tons and could reach a top speed of almost 23 miles per hour, Modern Navy, an official PLAN media outlet, announced, according to China Daily, an official newspaper of the Chinese Communist Party.

“The Kaiyangxing is capable of conducting all-weather, round-the-clock reconnaissance on multiple and different targets,” China Daily reported. “Until now, the PLA Navy has never made public so many details about its intelligence collection ships.”

Though there is still a lot that remains unknown about the Kaiyangxing, or how it specifically differs from its sister ships, its basic size and shape is similar to the U.S. Navy’s now decommissioned USNS Observation Island, though it is much smaller than her replacement the USNS Howard O. Lorenzen. However, Lorenzen, obtusely classified as “missile range instrumentation ship,” is solely focused on spying on foreign ballistic tests and gathering information on US tests with its powerful electronically-scanned array-type radar rather than acting as a multi-role electronic intelligence collector. China has similar ships, known as the Yuan Wang class.

As such, the Type 815-class as a whole seems to share more with Russia’s still active Balzam-class or Nowary's wedge-shaped Marjata. In 2016, the Norwegians replaced that vessel with a new spy ship, also named Marjata, which had a more traditional design.

If the Type 815s have at all similar capabilities, the appearance of one off Alaska earlier in July 2017 is an important development, but not necessarily surprising. As already noted, the ships may be able to grab a wide variety of important electronic information associated with the test, which came four months after the U.S. Army began sending the ballistic missile defense system to South Korea. Though that deployment was long in the works, China had and continues to criticize those plans, arguing that the long-range AN/TPY-2 in particular threatens its nuclear deterrent capabilities by being able to provide persistent surveillance of Chinese skies.

In theory, data from the Type 815’s trip near Alaska could end up informing new weapons designs or other measures to defeat THAAD in any potential conflict. There is always the potential risk that the details the Chinese grabbed could end up in the hands of North Korean intelligence agents, as well.

Beyond the THAAD test, the arrival of one of the Type 815s off the American coast is significant in general. This type of world-wide sea-based electronic surveillance was a capability previously limited mainly to the American and Russian militaries. The Russian Navy has deployed its Balzam-class ships to snoop on large-scale military activities, including a notable appearance near Hawaii during the Rim of the Pacific (RIMPAC) naval exercises in 2016. In February 2017, one of the Kremlin's smaller Vishnya-class spy ship appeared off the east coast of the United States, reportedly the furthest north the type had ever ventured along the American coast. In 2014, the original Type 815 Beijixing also snooped on the annual RIMPAC exercise, even as other PLAN ships directly participated in the event.

Even if the ships are less capable than their American or Russian counterparts, having six of them can only improve China’s ability to collect electronic intelligence on a number of potential opponents from the sea, including South Korea, Japan, and the United States. On July 2, 2017, the Tianlangxing, a Type 815G, transited the Tsugaru Strait separating Japan’s Honshu and Hokkaido islands. The ship was moving in the opposite direction from the Korean Peninsula, where a flurry of missile activity occurred two days later.

Regardless, the move through the Japanese territorial waters prompted a stern response from that country’s authorities, though it was unclear if the Chinese ship was actively collecting electronic emissions at the time. China countered that it was allowed to pass through the area under international law.

Regardless, if the Type 815’s arrival off the American coast ahead of the July 2017 THAAD test is any indication, the U.S. military may increasingly have to take into account that Chinese could be watching future launches from off shore.