HSV-2 Swift’s story doesn’t appear to be over just yet. 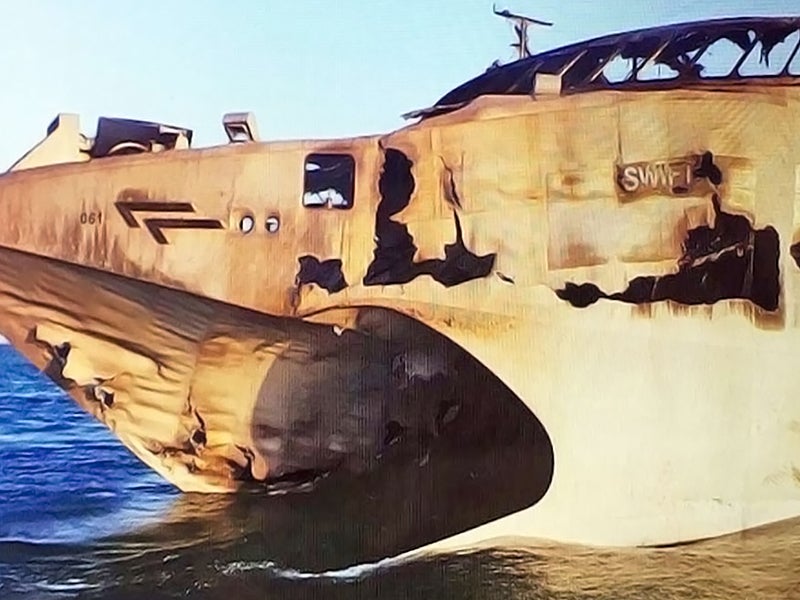 The high-speed aluminum catamaran which once served the US Navy and most recently the United Arab Emirates, HSV-2 Swift, was attacked last October near the Mandeb Strait by a anti-ship missile. The deadly explosion and the fire that ensued did horrific damage to the vessel's forward half.

Following the attack, it seemed as if Swift was a burned out hulk at best, but she may get a second lease on life of some kind, or at the very least she will be stripped of usable parts before being broken up.

The ship was originally brought to the nearby port of Assab in Eritrea after the attack, where it had remained for months. Then it suddenly appeared in Eleusis, Greece just days ago.

The zombie ship of sorts was towed through the Red Sea and the Suez Canal, into the Mediterranean before arriving at its current and somewhat peculiar resting place.

Clearly, a ship as ominous looking as the HSV-2 in its current state would draw some attention. Photos of the vessel moored in the harbor of the Greek city began hitting social media earlier in the week.

It turns out, a local ferry operator named SEAJETS has purchased what's left of the ship. The company operates similarly exotic vessels that like Swift are built by the Australian ferry company Incat. The company describes its fleet and its mission on its website as such:

"With a fleet of 11 ships, Seajets has the largest network of highspeed ships in the Aegean interconnecting 17 ports with 140 connections, promising you comfort and safety on board. With a total capacity of over 8.500 passengers and 1.450 vehicles Seajets is your ultimate link to the Cyclades and Crete.

With an addition of 3 new ships in its fleet, this year Seajets offers you even more options to reach you favorite destinations, 7 months a year, for an everlasting summer."

It isn't clear at this time exactly what the company plans to do with the vessel, and according to a short news story from Greece, they don't seem to know either.

We will see if we can dig up any more information from Swift's new owner about its future. But amazingly the ship's story has not come to an end just yet.