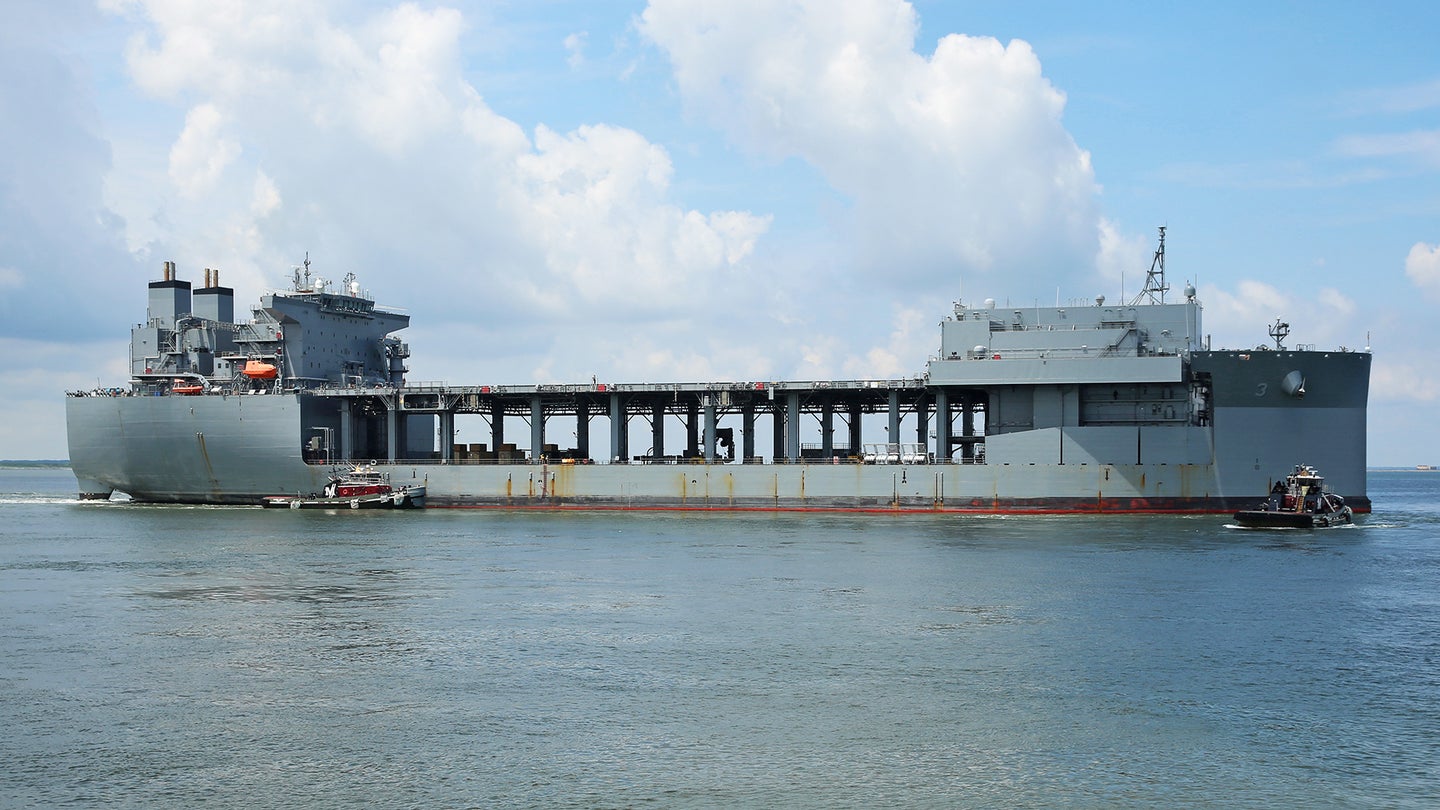 The highly modified Alaska class oil tanker, now dubbed Expeditionary Mobile Base USNS Lewis B. "Chesty" Puller, left Norfolk on June 10th and is on its way to the Middle East with no return date in sight.

The deployment marks a new age in America's ability to be able to project persistent naval power abroad, and is the first time a purpose-built sea base has been fielded by the Pentagon.

The vessel is also a cousin to the Navy's Expeditionary Transfer Dock, which is based on the same core design but works as a massive ship-to-shore logistical conduit. Both classes of these purpose-built ships, as well as a shadowy second-hand transport vessel that is being modified into a special operations mothership, are part of the Department of Defense's long, but somewhat obscure history of sea basing. Most notably, sea bases hastily adapted from barges and logistical vessels worked as special operations platforms in Vietnam. During the Tanker Wars of the 1980s— under operation Prime Chance and Earnest Will—leased barges worked to support special operations detachments, mine sweeping operations, and interdiction efforts. They even acted as forward staging bases for MH-6 andAH-6 Little Birds, and later on OH-58D Kiowa Warriors, as well as other helicopters.

The War Zone did a full profile on the Puller last November, when the ship was still in testing and undergoing upgrades. But suffice it to say that it is a multi-role platform, capable of deploying and sustaining pretty much any helicopter in the DoD inventory from its large flight deck and hangar space. This includes the mighty MH-53E Sea Dragon mine countermeasures helicopter. In fact, the Puller can operate four Sea Dragons at once, and deploy any of the sleds or other devices they pull behind them during mine hunting operations.

The Puller is also capable of deploying small boats and unmanned craft, as well as bunkering larger boats that are part of anti-mine warfare and special operations. The ships cavernous "mission deck" has immense room for storage of vessels and outsized cargo, and can receive all types of bulky upgrades in the future.

Mine sweeping will likely be the ship's primary role in Middle East, but the Puller can also take on other missions, like taking part in amphibious assaults and supporting special operations, sea control, interdiction and disaster relief missions, as well as counter-piracy duties, to name a few. Even supporting attack helicopters for low-intensity kinetic operations, including those against small boat swarms, are possible. In fact, the whole idea behind this class of ship is that it can be adapted to pretty much anything commanders imaginations' can come up with.

The Puller, and eventually its sister ship the USNS Hershel Williams, will have decades to prove their multi-role potential in various locales abroad, such as the South China Sea, but for now, the Puller is likely to set up shop in the heart of the Persian Gulf. Nine months ago, the USS Ponce, a 46 year old Austin class Amphibious Transport Dock that was modified to be a temporary forward staging base, had left its station in the Persian Gulf after over four years there working primarily as a counter-mine warfare platform.

Ponce moved into the Gulf of Aden area of operations following a spate of anti-ship weapons attacks on US, Saudi and UAE vessels. It stayed in the general area around the Horn of Africa well into the Spring, although she may be back in Persian Gulf at this time. Regardless, the Ponce is slated for decommissioning in Norfolk this October.

If the Puller does indeed take up station in Persian Gulf—it could also stay near the Horn of Africa until the Ponce heads home—its presence will not go unnoticed. The shear size of the vessel alone, displacing 78,000 tons and having a length of 764 feet, makes it impossible to miss.

The ship represents a massive upgrade in size alone over the Ponce, which displaces a comparatively paltry 16,500 tons and has a length of 570 feet. The height of the ship, and its unique "platform" layout also differentiates it significantly from tankers and warships that regularly transit the region.

Unlike the Ponce, which packs two Phalanx close-in weapon systems, a pair of 25mm Bushmaster chain guns and a semi-experimental laser for self defense against aerial threats and small boats, the Puller does not have any robust self defense capabilities at all. Nor does the ship even have electronic warfare systems or countermeasures to defend itself from an attack non-kinetically. This puts into question the massive ship's vulnerability, especially since non-state actors are increasingly fielding anti-ship weapons. In addition, the Persian Gulf is basically a super anti-ship missile engagement zone, with Iran's coastline and its naval forces bristling with all types of these missile systems.

It is possible that the Navy could eventually deploy containerized or vehicle-mounted weapon systems onboard the Puller. In fact this is becoming an increasingly common trend, with the ability to field modular point air defenses, deck gun-like capability, cruise missiles and even guided artillery rockets and ballistic missiles from virtually anywhere, including a ship's deck. The Puller certainly has plenty space for these systems and since they require no permanent integration into the ship's core systems, they are easy to swap out and upgrade depending on the mission and threat profile.

In fact, the Navy and USMC have improvised this type of setup before, rolling out a M1161 Growler light vehicles with heavy machine guns on the stern of the USS Carter Hall during a transit through the Bosphorus and into the Black Sea.

The Egyptians are putting their US made Avenger point air defense systems to use aboard their new Mistral amphibious assault ships:

Regardless of the questionable decision not to arm the Puller, its presence in the region will be a major upgrade in capabilities for the 5th Fleet and will officially usher in a new era of sea basing for the US Navy.