U.S. Navy Kicks Off Biggest Ever "Sea Breeze" Exercise In The Black Sea

This year's iteration of the annual Sea Breeze drills is larger and more complex and sends a clear message to Moscow. 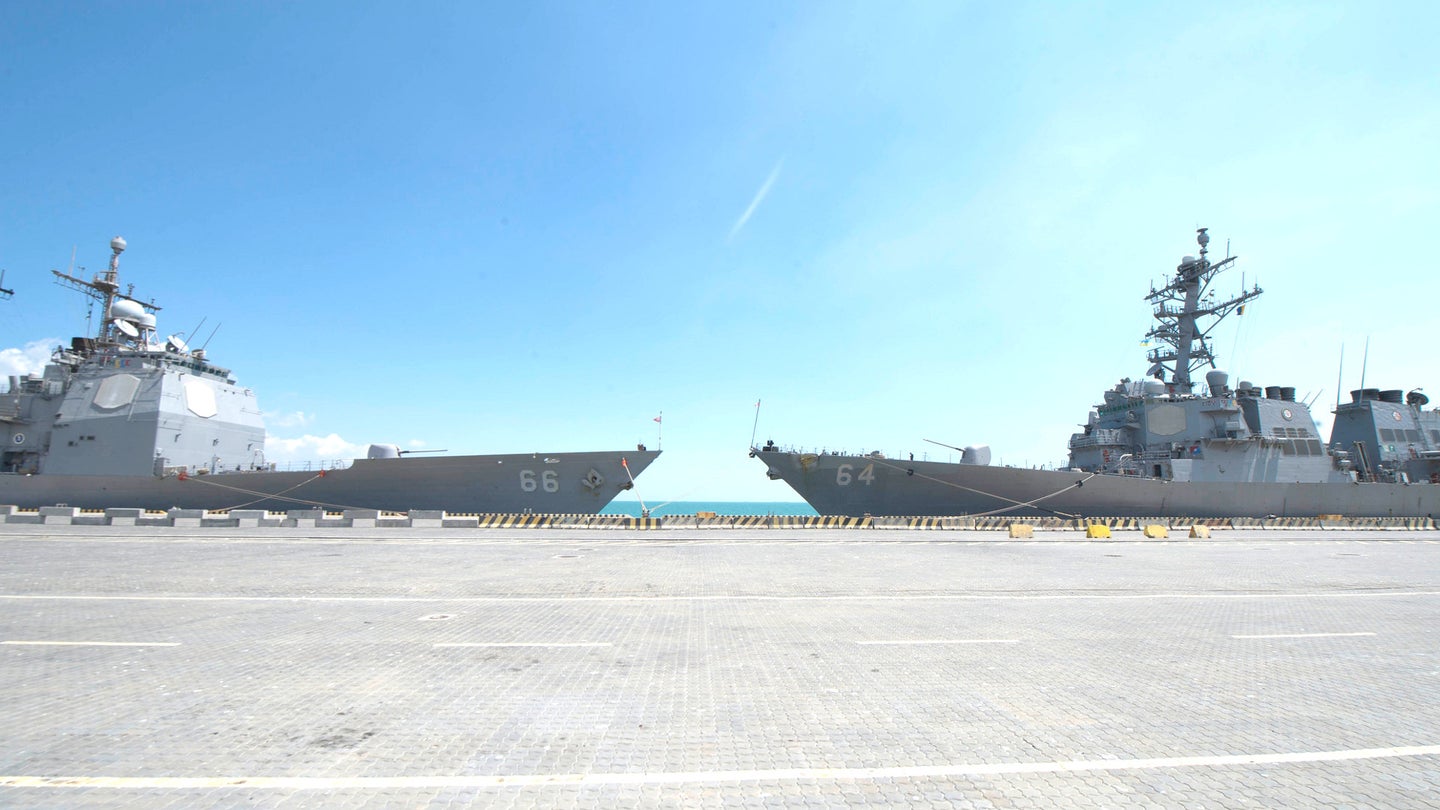 Every year, the U.S. Navy leads an international flotilla of warships, along with other naval forces in the air and on the land, through a series of frills in and around Ukraine’s Black Sea coastline as part of an exercise nicknamed Sea Breeze. This time, in the face of heightened tensions with Russia, the American contingent is significantly more powerful, including both the Arleigh Burke-class destroyer USS Carney and the Ticonderoga-class cruiser USS Hue City.

Exercise Sea Breeze 2017 officially began with a ceremony in Ukraine’s coastal city of Odessa on July 10, 2017. This is the seventeenth time the U.S. Navy’s Sixth Fleet has run the event, which dates back to the 1990s.

With more than 3,000 service members from 17 nations, including approximately 800 Americans from various U.S. military branches, this iteration is the biggest and most involved version to date. The practice scenarios cover maritime interdiction operations, air defense, anti-submarine warfare, damage control tactics, search and rescue, and amphibious warfare, according to the U.S. Navy. Usually, American personnel also conduct civic action missions, such as refurbishing schools or other municipal buildings, and engaging with the local public, in between the training sessions.

“We are all stronger together,” U.S. Navy Captain Tate Westbrook, the commander of U.S. 6th Fleet's Task Force 65, the fleet’s main surface force, and head of all American personnel participating in Sea Breeze 2017 scene, said at an opening press conference. “We will finish this exercise all smarter, all better, and more prepared as a team and as individual navies.”

Most importantly, this year, the U.S. Navy has sent both Carney, which is forward deployed to Spain, and the Hue City, detached from the USS George H.W. Bush’s carrier strike group. The George H.W. Bush is presently conducting operations from the Mediterranean Sea. Both ships have capable land attack, anti-ship, and air defense weaponry, advanced sensors, and, if armed with the appropriate missiles, ballistic missile defense capabilities. Part of Carney’s role in Europe is specifically to act as part of the regional Aegis Ballistic Missile Defense (BMD) shield.

In addition, the U.S. Navy has deployed a P-8A Poseidon maritime patrol plane, as well as SEALs, explosive ordnance disposal personnel, specialized divers, and Seabee construction elements. The Marine Corps has added members of its Europe-based rapid-response Fleet Antiterrorism Team, or FAST to the exercise as well. Also a number of U.S. Army personnel will also be on hand, rounding on the American contingent.

While two ships may not seem like much, sending Carney and Hue City into the Black Sea at the same time is a big deal and a notable increase in the firepower on display over previous Sea Breeze gatherings. Per the more than eight decade old Montreux Convention, countries that do not have a Black Sea coastline are limited in how many warships they can send into the body of water at any one time. You can read the exact method of measuring the total displaced tonnage here, but suffice to say it prevents American supercarriers and amphibious assault ships from entering at all. Other capital ships from non-Black Sea states that do meet the requirements may not remain there for more than 21 days per the agreement, to which the United States is a party.

So, in the past, the U.S. Navy has generally contributed one Arleigh Burke-class destroyer to the afloat portion of the exercise, as well as other, smaller elements for other components on land. In 2016, the U.S. Navy had added the landing ship dock USS Whidbey Island to the mix. Other participants, including those who do have Black Sea boundary, have generally only sent frigates and smaller warships. In short, having both Carney and Hue City in the tightly controlled and relatively small area sends a powerful message – one that message seems firmly directed at the Russians.

“The ships of my squadron will continue to operate in the Black Sea to reassure our partners,” U.S. Navy Captain Westbrook said in his opening remarks. “We are here to stay.”

“Our task... is to fight as one team,” Ukrainian Navy Captain Oleksii Neizhpapa, the director of the exercise, added. “The joint force will have the number one goal: to secure the neighborhood.”

Securing "the neighborhood" means securing it from the Russians. Every other country on the Black Sea – Bulgaria, Georgia, Romania, Turkey, and Ukraine – is taking part in Sea Breeze 2017. Three of those five – Bulgaria, Romania, and Turkey – are NATO members. In 2008, Georgia and Russia fought a brief war over the status of two break-away regions, an issue that remains unresolved. In March 2014, Russia seized Ukraine’s Crimea region and subsequently began actively supporting separatists fighting the government in Kiev. While Sea Breeze occurs on the other side of the country from fighting in eastern Ukraine, the international training mission has taken on an entirely new character over the past three years.

Now, the Ukrainian and U.S. Navy co-host the seemingly ever expanding drills. In addition, the bulk of the $4.5 million necessary to pay for the 2017 gathering, which doesn’t include the cost of operating the two American warships, came from the United States’ European Reassurance Initiative (ERI). The ERI covers broad American efforts to calm its allies and partners in the face of Russia’s increasingly aggressive foreign policy in Europe. The fund includes money for exercises, new facilities, and other security cooperation tasks both with both NATO allies and other regional partners, such as Ukraine.

“This exercise, which is co-hosted by Ukraine, exemplifies our collective resolve to upholding international law, and to maintaining peace and stability in the Black Sea,” U.S. Navy Commander Peter Halvorsen, Carney’s commanding officer, said after the ship arrived in Odessa.

This year, Sea Breeze also follows a major diplomatic engagement between the United States and Ukraine. On July 9, 2017, Secretary of State Rex Tillerson’s made his first visit to the country in an official capacity and met with President Petro Poroshenko. America’s top diplomat pledged continued support to the Ukranian government in their fight against Russian-backed separatists.

“I think it is important to be very clear on what our goals are, the United States' goals are, with respect to the situation here,” Tillerson said during a joint press conference with Poroshenko. “And first and foremost, it is to restore Ukraine’s territorial sovereignty and integrity. … I’ve been very clear in my discussions with Russian leadership on more than one occasion that it is necessary for Russia to take the first steps to de-escalate the situation in the east part of Ukraine, in particular by respecting the ceasefire, by pulling back the heavy weapons, and allowing the OSCE observers to carry out their responsibilities.”

The Russians were already sure to take notice and a foreign navy shadowing an American-led exercise is hardly out of the ordinary. It’s a prime intelligence gathering opportunity for all parties involved.  Moscow conducts its own exercises to show off its considerable military capabilities in the region, too. It's worth noting that the small confines of the Black Sea would easily play to the Kremlin's strengths in an actual conflict. Shore-based anti-ship cruise missiles such as the Bastion-P, as well as networked air defenses, which could impede a counter-attack, would pose a significant threat to one or two U.S. warships attempting to operate independently in the area. In 2016, Russia threatened to put some of these weapons into action and knock down Ukrainian missiles during tests, though they never followed through.

However, since the Ukraine crisis began in 2014, there has been an increasing number of tit-for-tat engagements throughout Europe, including a number of incidents with U.S. military aircraft and ships that American officials have categorized as “unsafe” or “unprofessional.” Since January 2017, many these interactions have occurred in and around the Baltic Sea. In one particularly notable instance, a Russian Su-27 Flanker fighter jet photo bombed a massive formation of NATO aircraft that the alliance had put together for members of the press as part of the annual Baltic Operations maritime exercise, or BALTOPS.

It’s not hard to imagine a similar interaction over the Black Sea, especially after Tillerson’s comments and the remarks at the start of Sea Breeze 2017. It wouldn’t be the first time either that there have been tensions surrounding the exercise or American activities in the region, either. In April 2014, a Russian Su-24 attack aircraft buzzed the Arleigh Burke-class USS Donald Cook in the Black Sea. Five months later, another one of the planes made similar passes near the Canadian Halifax-class frigate HMCS Toronto as it made its way to Odessa for the start of Sea Breeze 2014. Another naval incident occurred in the Eastern Mediterranean Sea in June 2016, when the Russian Navy claimed an American destroyer, USS Gravely, cut off on of their frigates in international waters.

U.S. relations with Russia are especially cool for other reasons, including the Kremlin's continued support for Syrian dictator Bashar Al Assad. American personnel in Syria, ostensibly fighting ISIS terrorists, have come into increasingly dangerous contact with forces loyal to the regime in Damascus. Assad himself enjoys the protection of Russian forces in his country, who effectively shield him from punitive attacks. The United States also accuse authorities in Moscow of having sought to influence and possibly sway the outcome of the 2016 U.S. presidential election.

Whatever happens, the U.S. Navy’s deployment of both Carney and Hue City clearly underscores America’s commitment both to its European allies and partners in general and to Ukraine in particular.