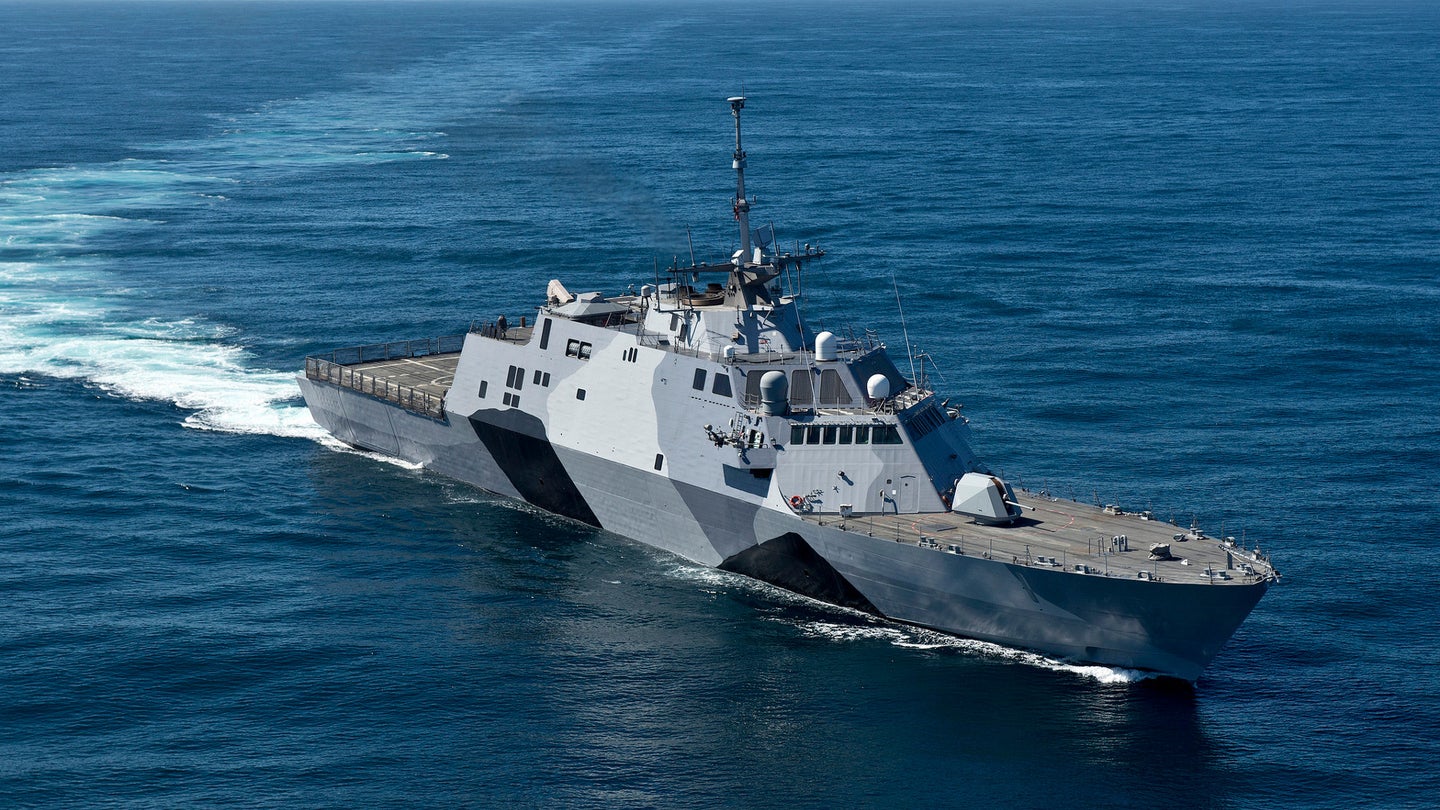 The U.S. Navy has released the first formal requirements for a proposed new frigate design, which it is now referring to as Guided Missile Frigate Replacement Program or FFG(X). The plan leaves open the possibility the service will buy a clean-sheet design in lieu of an “up-gunned” variant of the much maligned Littoral Combat Ship (LCS). Whatever happens, the new ships will finally include a robust area air defense capability.

On July 10, 2017, the Navy released a request for information regarding the planned FFG(X) project, outlining a number of basic parameters and desired features. The service did not include any cost limits, but said prospective ship builders should include detailed estimates, as well as mitigating factors, for a fleet of up to 20 ships in notional 2020 dollars. Budgets permitting, beginning in the 2020 fiscal year, it could potentially buy one hull a year for two years, followed by two each year for the next nine years.

The first mission of the final frigate design is to “fully support Combatant and Fleet Commanders during conflict by supplementing the fleet's undersea and surface warfare capabilities, allow for independent operations in a contested environment, extend the fleet tactical grid, and host and control unmanned systems,” the overview noted. Second, it should “relieve large surface combatants from stressing routine duties during operations other than war.”

In order to meet these mission requirements, there are 11 “desired” systems prospective vendors will want to assure make it into their proposals. The most important by far is the inclusion of an undefined “self defense launcher” in the final design. The Navy specifically said it was interested in available “trade space” for a system that could potentially launch the RIM-162 Evolved Sea Sparrow Missile (ESSM) and the Standard Missile-2 (SM-2). The most obvious choice would be an array of Mk 41 vertical launch system (VLS) cells somewhere on the ship. These can accommodate single SM-2s or quad-packed ESSMs. This would be a major capability upgrade over the existing LCS. Even the up-gunned LCS concept, also known as the Small Surface Combatant (SSC), lacked any real air defense capability, making it effectively a sitting duck in almost any real combat scenario, despite adding $70 million to the ship's price tag.

In March 2017, as part of a series of recommendations for how the Pentagon might reorganize its naval modernization priorities, The War Zone’s Tyler Rogoway highlighted this issue, writing:

This specific capability would come in the form of a vertical launch system (VLS) capable of firing RIM-162 Evolved Sea Sparrow Missiles. This feature alone, paired with the proper radar and combat system upgrades needed for targeting, would allow these ships to operate independently of multi-billion dollar and already over taxed Aegis-equipped cruisers and destroyers in medium and even high-threat environments. This way the frigate could not only do anything the LCS can do, but it can also take the pressure off America's most capable and expensive surface combatants for many missions, like convoy escort duties and protecting key elements that support the sea basing concept.

Beyond being far more versatile and able to operate much more independently than the standard LCS, this ship will be able to confront the growing anti-ship missile threat, one that it is rapidly proliferating among non-state actors. It will also feature other improvements, like the ability to fire medium-range land-attack and anti-ship missiles. The current LCS configuration—a giant jet boat meant to supposedly fight in the littorals where the anti-ship missile threat is most unpredictable—simply will not do. And that is not to mention the baseline LCS's many other design and conceptual deficiencies and failures.

The other 10 desirable systems for the notional FFG(X) include the COMBATSS-21 battle management system, a three-face fixed array Enterprise Air Surveillance Radar (EASR), the SLQ-32(V)6 electronic warfare suite, two four-round canisters with over-the-horizon anti-ship missiles, a SeaRAM self-defense system, the Mk 53 Nulka anti-missile decoy system, and more. There should be space on each FFG(X) for at least one MH-60R multi-mission helicopter, as well as an MQ-8C Fire Scout drone or similarly-sized unmanned aircraft, too.

Lockheed Martin’s COMBATSS-21 leverages components from the larger and more capable Aegis system found on Arleigh Burke-class destroyers and Ticonderoga-class cruisers. Raytheon's EASR shares features with the radar the Navy will install on the future Ford-class aircraft carriers. It's an eminently scalable system made up of a number of self-contained radars each inside a two square foot container. A full system can have any number of these individual, electronically scanned units, each able to perform individual functions or operate linked together to focus their combined energy on a single task, a concept that the video below explains in more depth. The EASR on the FFG(X) will have a three-by-three-by-three arrangement with three panels each with nine of the smaller radars each.

Using a VLS array for the self defense launcher requirement could have the potential to supplement or even replace the containerized anti-ship missile requirement, too. The Navy’s request specifically asks for vendors to mention if they can include “strike length” cells in the self defense launcher. The service is already separately looking to purchase this over-the-horizon weapon, which could be either containerized or vertically-launched. At present, however, the service’s existing requirements are so narrow that both Boeing and Lockheed Martin have withdrawn their submissions, suggesting certain advantages in their products wouldn’t be taken into consideration. This has left a partnership between American defense contractor Raytheon and Norwegian firm Kongsberg, offering a version of the latter’s Naval Strike Missile (NSM), as the only major team still taking part in the competition. The existing versions of the NSM are container launched.

On top of all that, there is an entire second tier of equipment that would add even more functionality. There 14 systems in this category, such as AN/SLQ-61 Light Weight Tow (LWT) and AN/SLQ-62 Variable Depth Sonar (VDS) linked together with the centerpiece AN/SQQ-89F underwater warfare system, the Mk 110 57mm gun with the Advanced Low Cost Munition Ordnance (ALaMO) projectile, Longbow Hellfire capability, and other radars and sensors. In February 2017, the Navy demonstrated the vertically-launched Hellfire module onboard the Freedom-class LCS USS Detroit. Still in development, the Navy hopes ALaMO will give the Mk 110 gun the ability to better take on unmanned aerial vehicles and swarms of small boats.

Together, these systems would address many of the existing LCS’s deficiencies, which prevent them from independently operating in even low-threat environments at present. Equipped for its main functions, the new FFG(X) would be able to seamlessly integrate into larger task groups, including aircraft carrier strike groups and amphibious expeditionary strike groups, as well as provide escort for logistics convoys and other formations. The ships should have weapons and equipment that complement and enhance the existing anti-ship, air defense, and electronic warfare capabilities of those groupings.

As an independent surface combatant, the frigates would be able to operate in low to medium threat environments, hunting submarines and taking on other surface ships under certain conditions, as well as performing less intensive security cooperation and humanitarian assistance missions as necessary. The second tier of possible equipment includes provisions for two rigid hull inflatable boats, which could help the ship support anti-smuggling and special operations support missions, as well.

There is no word yet on whether the new FFG(X) will have additional armor compared to the existing LCS, which has been another major issue, but it likely will. Even the proposed "up-gunned" LCS derivatives featured more armor in critical areas. On October 2016, Yemeni rebels effectively destroyed the ex-USNS Swift, an aluminum hulled catamaran vessel with a hull similar in construction to both LCS variants, with a shore-launched anti-ship cruise missile. “Grade A shock hardening for propulsion, critical systems, and combat system elements to retain full air defense and propulsion capabilities,” was the only vulnerability requirement outlined for the future frigates in the Navy’s request for information.

Notably, the Navy did not specify a minimum or maximum displacement for the final ship design, either empty or with a full load and its complement of no more than 200 sailors. With full loads and maximum crews of less than 100 individuals, the existing mostly aluminum Independence-class LCS displaces approximately 3,100 tons, while the steel-hulled Freedom-class variant displaces 3,500 tons. Modern warships classified as frigates have a wide range of displacements, but generally no more than 7,500 tons on the extreme end. The FFG(X) should be able to travel at least 3,000 miles at a cruising speed of at least 16 knots, while being able to sustain a speed of least 28 knots during combat.

“This is an effort to get the design right up front,” Rear Adm. Ronald Boxall, the service's director of surface warfare, said in an interview with Defense News. “We're looking to have a dialogue with industry to get the most capability for the best price.”

This all leaves open the possibility for contractors to offer ships that do not use one of the two existing LCS hull forms. But that doesn’t necessarily mean the Navy will buy an all-new ship. On possibility would be the Ingalls Patrol Frigate concept, which is based on the U.S. Coast Guard's already in production Legend-class National Security Cutter.

Another option would be to simply join with Saudi Arabia’s planned purchase of a much improved derivativeof Lockheed Martin’s Freedom-class LCS known as the Multi-Mission Surface Combatant (MMSC). This design has many of the features the Navy is asking for in its FFG(X) request for information, such an improved radar array, the COMBATSS-21, a 16-cell Mk 41 VLS and containerized Harpoon launchers, as well as a much more capable 76mm main gun. The Kingdom is already on track to buy four of the vessels for $6 billion and the design will likely be ready to go into production within the Navy's FFG(X) timeline thanks to the continued interest in Riyadh. Above all else, the Saudis would have paid for all, or at least a large portion of its development cost.

Foreign options also exist that can be adapted to the Navy's FFG(X) requirements. But buying a foreign design, even one modified to accommodate US systems and to adhere to other requirements, as well as being built domestically—is somewhat unlikely.

However, the Navy’s does leave open the possibility it will continue to push ahead with yet another variant of the SSC concept. “A competition for FFG(X) is envisioned to consider existing parent designs for a Small Surface Combatant that can be modified to accommodate the specific capability requirements prescribed by the US Navy,” the new request for information explains right up front. Lockheed has already proposed a frigate variant of its Freedom-class LCS that is a less substantial upgrade than the MMSC, but still provides many of the Navy’s desired features.

Of course, there’s still time for the service to refine and clarify these requirements, especially based on the responses they get from shipbuilders. A request for information is just that, rather than a fixed plan to buy a system. Still, the request is a clear admission from the Navy that despite more than a decade of struggling with LCS, it finally understands it needs a real frigate, and one with robust air defense capabilities.