Late production Oliver Hazard Perry class frigates had what is akin to the mother of all trolling motors that crews used creatively during multiple phases of the ship's operation. 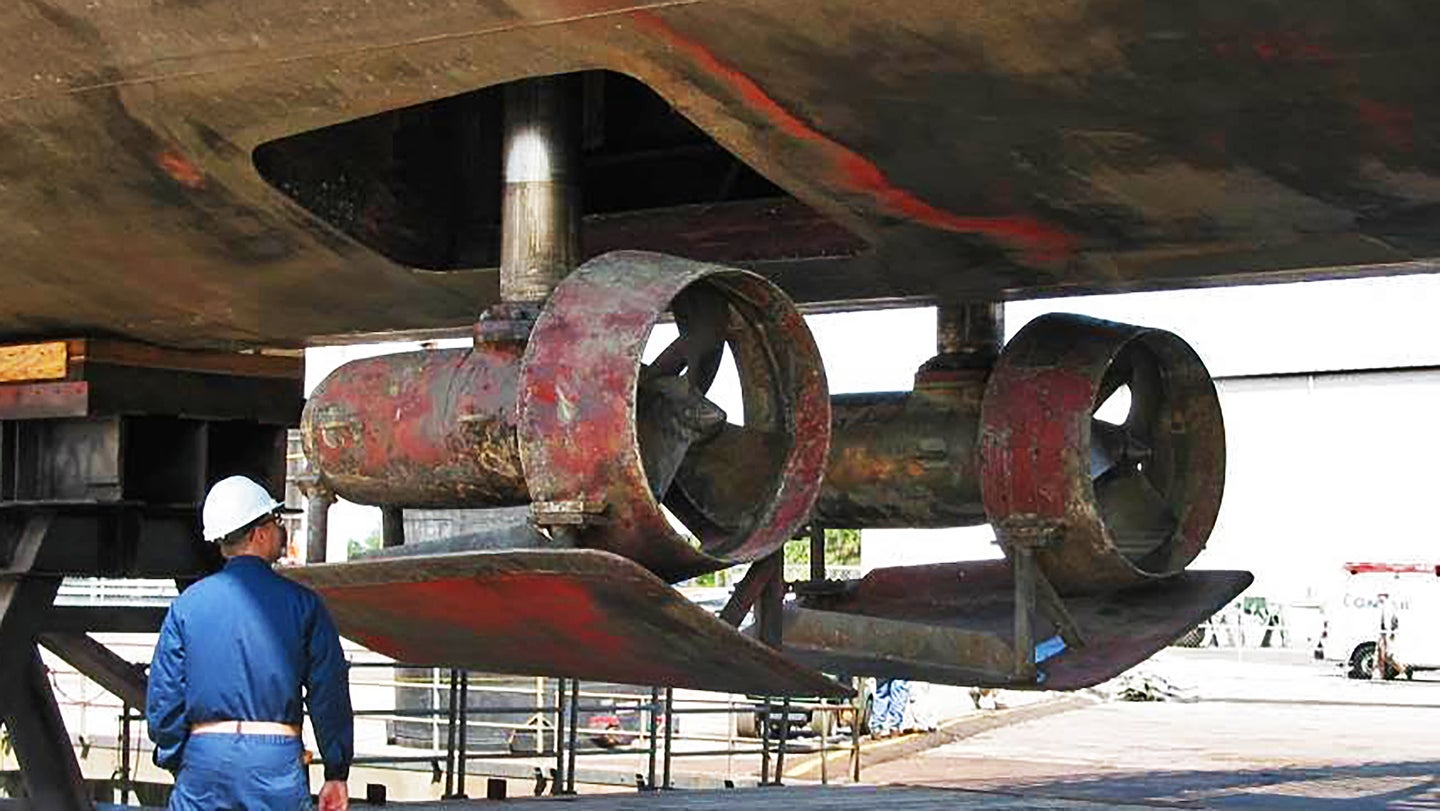 The Oliver Hazard Perry (FFG-7) class has made news lately as the Navy looks to potentially bring the handful of FFG-7 ships it still has in mothballs back out of retirement as part of a larger initiative to fielda 355 ship Navy. The hardy FFG-7s were always in the public eye, making up the lower-end of the Navy's major surface combatant cadre, and their capabilities are well known. But one largely unrecognized, but very innovative feature was present on newer ships in the class—a pair of drop-down, swiveling auxiliary propulsion pods.

The feature is so obscure in fact, that the Naval History And Heritage Command nor the Navy Sea Systems Command could dig up a single picture or video of the system. In fact, the only photos we could find anywhere were posted by user "Shifter3" some seven years ago in a radio-controlled model forum called RCgroups.com.

Referred to officially as Auxiliary Power Pods (APPs), these sci-fi looking units could be extended to propel the ship at speeds of up to roughly six knots without the main screw providing any thrust and even without the ship's gas turbines running at all. The APPs run off electrical power from the ship's diesel generators and are located roughly below the front of the ship's forecastle.

Seeing that they can rotate through 360 degrees, these secondary drive units were used in conjunction with the ship's main propulsion and rudder to get in and out of tight berths and harbor areas with little assistance. But above all else, they could work as super-sized trolling motors or sorts, and in an emergency, they could provide a secondary form of propulsion to get the ship out of harm's way and into safe waters or port. Their inclusion later on in the FFG-7 design made the type's single shaft and single screw configuration less of a liability. They also may have had some acoustic signature benefits while in use as opposed to the ship's primary propulsion system.

An official response from our friends at NAVSEA described the system as such:

The Auxiliary Power Pods (APP) installed on Oliver Hazard Perry-class frigates had two purposes. Because FFGs only had one main propulsion engine (one prop and shaft), these pods could be used to maneuver the ship should a casualty be suffered. These pods were also used to help the ship navigate in and out of ports as they provided excellent steering capability. APPs were included on the ships as part of the new construction program and were not back-fitted."

In many ways, these azimuth thrusters were precursors to the Azipods that serve as many ships' primary form of propulsion today, including some military vessels. Their hybrid-like propulsion was also ahead of its time for surface combatants, as the concept is something the U.S. Navy is just deploying en masse on its surface fleet today, albeit on a far grander and more powerful scale.

The amphibious assault ship USS Makin Island was the first US Navy ship to feature the hybrid-electric propulsion concept when it was commissioned in 2009. Fast forward to today and even older Arleigh Burke class destroyers are being back-fitted with similar systems, and the stealthy Zumwalt class destroyer takes the whole concept to a far more exotic level.

APPs, along with the Oliver Hazard Perry class ships that house them, are still in service with many navies around the world today. Allied countries have taken America's unwanted frigates and have upgraded them with modern capabilities, like vertical launch systems, advanced sensors, updated combat systems, and even enlarged hangar bays. Many of these vessels will serve for decades to come.

We'll have to wait and see if the FFG-7s and their quirky Auxiliary Power Pods are regenerated and receive similar capabilities for use once again with the US Navy, but they seem to be by far the most likely type to be returned to service under the 355 ship Navy initiative.