That the name might be an acronym is only part of what's odd about this year's iteration of the controversial special operations training exercise. 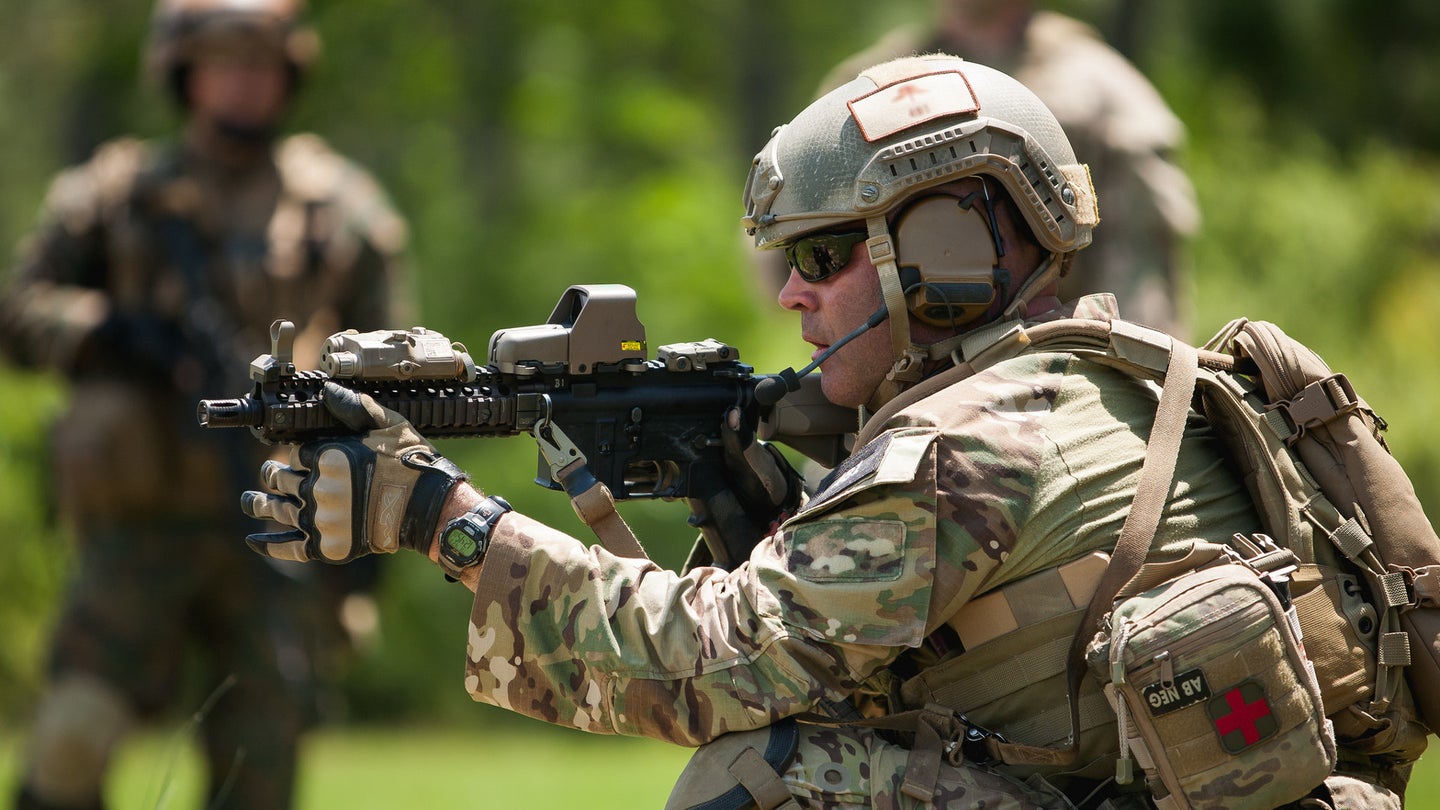 Two years after the U.S. Special Operations Command’s (SOCOM) Jade Helm training exercise inflamed conspiracy theorists, prompted Texas to order its state guard to monitor federal troops, and otherwise became a national news story, the latest iteration of the event has come and gone with little acknowledgement of any kind from the U.S. government or the public. And yet, the U.S. military has still found a way to make it weird, including the suggestion that Jade Helm is actually a very long acronym.

Jade Helm 2017 reportedly occurred, at least in part, between May 2 and 5, 2017, according to one official U.S. Air Force news item. The story explains how the service supplied C-130J and C-17 airlifters to help move and airdrop at least 40 personnel and more than 120,000 pounds of cargo in support of the practice session. The crews flew some of the missions to and from Dyess Air Force Base in Texas and Joint Base Charleston in South Carolina.

None of this sounds out of the ordinary for a training exercise within the United States, especially given that the 2015 version of Jade Helm involved separate events in multiple states designed to simulate various so-called irregular and unconventional warfare scenarios throughout a fictional region containing friendly, enemy, and neutral “countries.”

Irregular warfare is essentially another term for guerrilla warfare, relying on indirect actions to win the support of a specific population. Unconventional warfare is the U.S. military’s broad term for working with local forces to resist an occupying force, undermine a hostile government, or just support conventional military activities. These are core missions for American special operations forces and are common subjects for training exercises. In February 2017, American special operators joined their colleagues from the Baltic States of Estonia, Latvia, and Lithuania to stage a mock guerrilla war in West Virginia called Ridge Runner 2017.

But then things get a little odd. There only appears to be one official news story on this exercise at all and it's available on the website of Air Mobility Command’s Eighteenth Air Force, situated at Joint Base Charleston. At the time of writing, a google shows that there were more than a half dozen more copies on other Air Force pages, as well as number of photographs. For some reason, someone appears to have taken these offline or otherwise broken all the links. Using Google to search the Defense Video Imagery Distribution System, which is the main U.S. military's public affairs hub, brings up more broken links. Amusingly, the only place on the web that seems to have the bulk of the public domain pictures from Jade Helm 2017 is stock photo site Alamy, which has them available for purchase.

Oh, and unless there's been some sort of mistake, JADE HELM actually stands for the amazingly obtuse Joint Assistance for Deployment Execution Homeland Eradication of Local Militants. A separate web search for this phrase does not turn up any other results. These are exactly the sort of vagaries that provide space for conspiracy theories. In particular, the phrase “Homeland Eradication of Local Militants,” the official meaning of which no one ever explains in the Air Force story, sounds almost engineered to provoke the same concerns from same communities that came up surrounding the 2015 exercise.

For those who don’t know – or have thankfully forgotten – that training exercise prompted a laundry-list of conspiracy theories, including a particularly complex idea that the United Nations was mobilizing a Chinese military force to sneaking into Texas from Mexico via tunnels leading into abandoned Walmart stores. No, really. At the height of the public interest in the exercise, The War Zone’s own Tyler Rogoway, then writing for Foxtrot Alpha, wrote this:

I can’t deny that Operation Jade Helm sets up a ripe canvas for which conspiracy theorists can paint their biggest nightmare scenarios. In reality, it is just another exercise in a never ending list of DoD and homeland security drills that deal with everything from huge earthquakes and multi-national air wars to counter-terrorism offensives and zombie infestations. Yet even the Texas Governor’s office is getting on the conspiracy theory bandwagon to some extent, commanding the volunteer reservists of the Texas State Guard to keep close tabs on the exercise as some constituents are demanding.

While at War Is Boring, I followed up on this monitoring mission, finding that the State Guard had done the absolute bare minimum to keep tabs on the situation. Thanks to the Texas State Public Information Act I obtained a transcript of a series of almost hilariously banal text messages between Texas State Guard commander Brigadier General Gerald “Jake” Betty and Lieutenant Colonel Robert Pawlak, a U.S. Army Special Forces officer with the thankless job of acting as the main spokesman for the exercise as it increasingly became a public relations nightmare. Pawlak even held a number of town hall style meetings with local groups in an attempt to allay fears that had gotten a certain legitimacy not only because of the actions of Texas Governor Greg Abbot, but also thanks to comments from Texas Senator Ted Cruz and notable celebrities, including Chuck Norris.

Just as in 2015, there is absolutely nothing to suggest the latest Jade Helm exercise is actually in any way a cover for something nefarious. These types of training exercises are common and routine. However, as in this case, the haphazard way in which information about them is released or otherwise communicated to the public, also seems to be an unfortunate, but regular occurrence.

In 2008, residents of Portland, Oregon were disconcerted to see special operators in helicopters over head, with an alert about the training exercise only going out to the general public an hour ahead of time. Media attention subsequently became so intense that the organizers had to move whole event to another area entirely. Similar incidents occurred in Miami, Florida and Galveston and Houston, Texas in 2012.

The biggest part of the problem seems to be the delegation of authority for informing the public at large. As a rule, SOCOM doesn’t put out public missives itself about what’s going on so as not to encroach on local authorities. It’s also designed to help protect their tactics and procedures from unwanted attention, as happened in Portland in 2008.

I had inquired as to the procedure after obtaining the two official notices regarding the 2012 practice sessions in Florida and Texas. In both cases, censors redacted the list of individuals who had been briefed on the events, referred to simply as “Realistic Urban Training” or RUT. At the bottom of both notices, which give a basic overview of what locals could expect to see and hear, there is a boilerplate line, with emphasis added, reading “We request this information NOT be released to the press.”

Of course, as Pawlak’s town halls show, sometimes things require military spokespersons to go out and clarify things. Unfortunately, this seems to occur mainly when relations with the public have already been strained by poor communication on the part of state or local officials, many of whom have likely been in the know the whole time. They have to be for safety reasons. It otherwise seems that when these exercises go off without a hitch, you don’t even hear about them until months after the fact.

All in all, it seems like a system that could do with some improvement, whether it be a standardized mechanism for alerting the public or a more clearly defined chain of responsibility for doing so. Until then, it seems like that these otherwise benign training events will continue to be a regular source of consternation.